To say Hasbro repeatedly returns to the 1984 cast of Transformers characters would be an understatement so massive, that were you to put it into some form of visual context it would most probably resemble poor old Palpatine’s exploding Death Star. Where once new takes on the franchise surfaced every couple of years, ready to become an entry point into the franchise for a new generation of fans, now we seem to be caught in a metaphorical game of pinball between G1 and those noisy live action movies. For a resolute “Gewunner” such as myself it’s a wonderful time to be alive, but I can see why folks at the other ends of the Cybertronian spectrum might not have quite the same warm and fuzzies that I do. There is however one thing that will be met with near universal agreement – Ratchet’s Generation One form has been criminally underserved when it comes to Generations figures.

Since Generations began, as Classics in 2006, Ratchet has had just the one toy. One. Singular. A retool of Universe Ironhide all the way back in 2009 is all that poor Ratchet has been given and as it was released in the death throes of the Universe portion of Generations it became a nightmare to obtain. Timecop jump forward in time, and a decade later Ratchet has finally been deemed worthy of a brand new Siege figure, and a super generous friend was kind enough to pick one up for me on his travels.

The doctor is in, so lets not keep him waiting…. 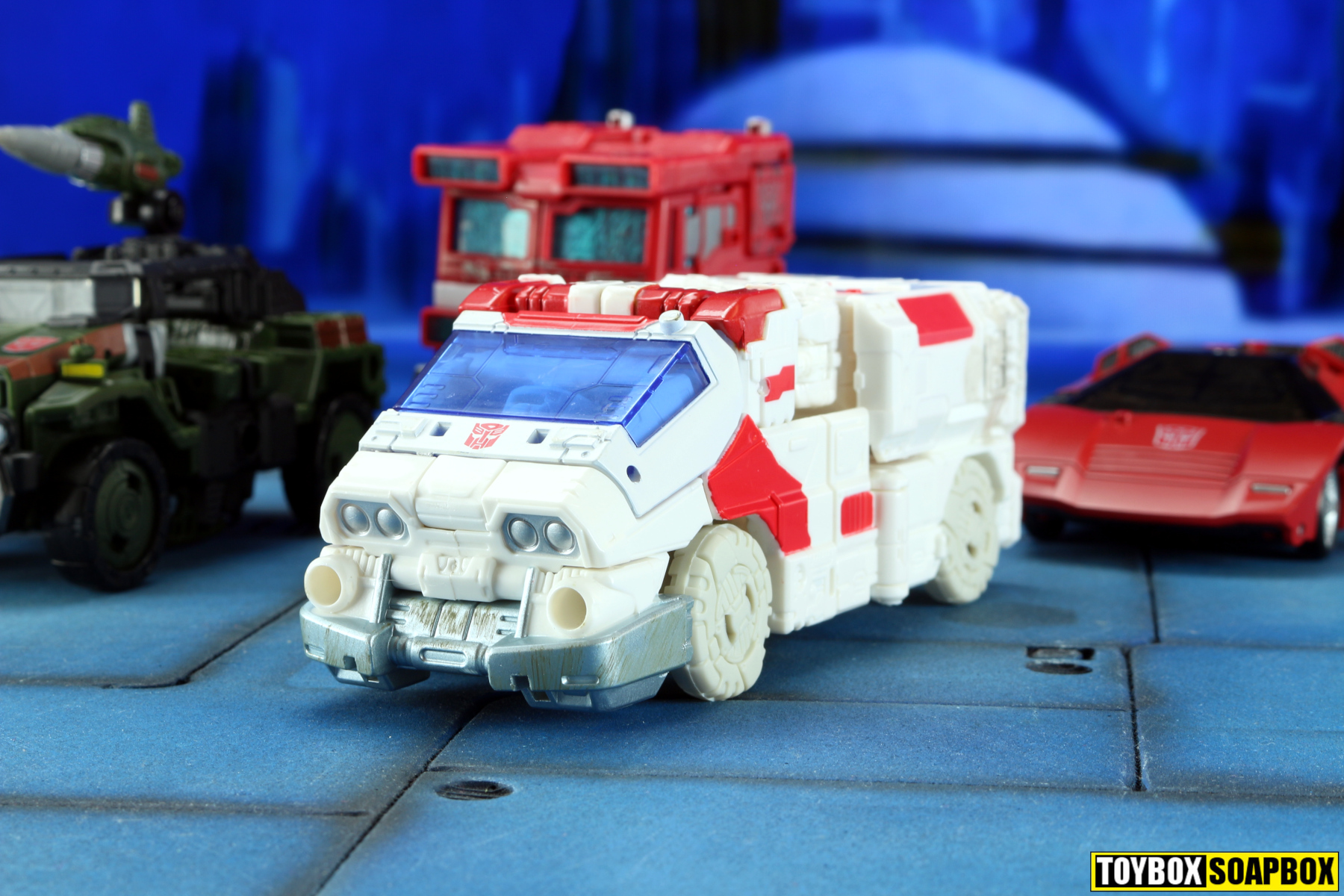 Given that it has been his chosen alternate form since the inception of The Transformers, Ratchet turning into an Ambulance is about as surprising as the Germans winning a penalty shootout. However there’s always been something of a contradiction to it. When you think of an Ambulance what tends to spring to mind is tragedy, death and Hulk Hogan trying to murder The Rock – yet Ratchet’s G1 bio describes him as something of a party animal. Perhaps it’s a coping mechanism. After a long shift down the Iacon ER with robo-Clooney and pals, Ratchet hits the town for a few brewskis and attempts to bury the horrors he’s been exposed to, deep down below a layer of booze.

There’s something profound in there – but for the life of me I can’t find it. 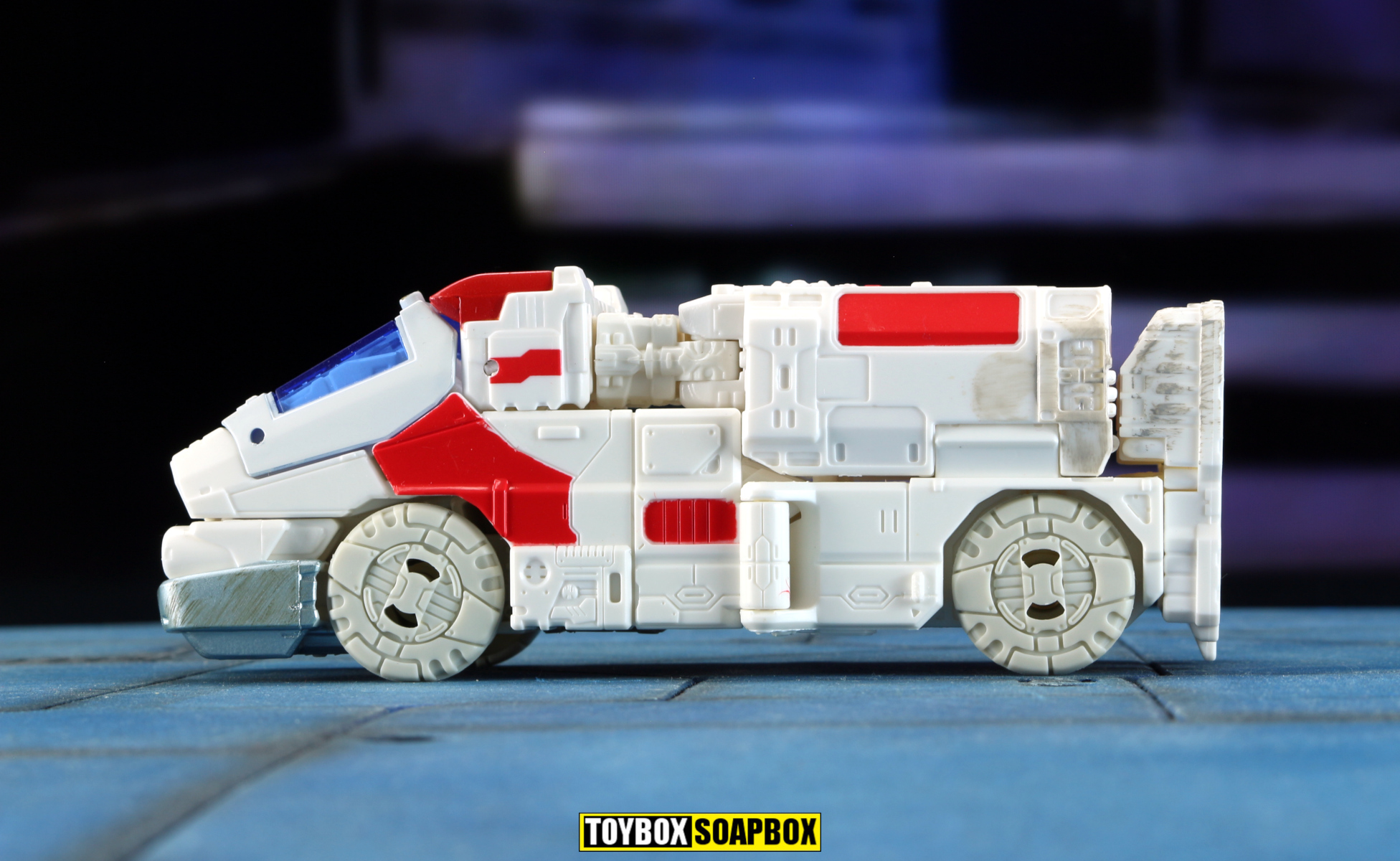 Ratchet is a retool of Siege Ironhide and for the most part they look very similar. Due to the nature of the transformation, Hasbro couldn’t pull their usual trick of just gluing a light bar to the roof and calling it a day. Instead they’ve been forced to retool the shoulders to each “shoulder” (hah, I crack myself up) a half of the light bar. The end result looks a bit like two painted red fingernails, but it’s an interesting way to add a light bar to the mold and it also does partly draw your gaze away from the clearly exposed elbows. There is no such luck for the robot mode feet which hang off the back as if imitating a giant cushion. 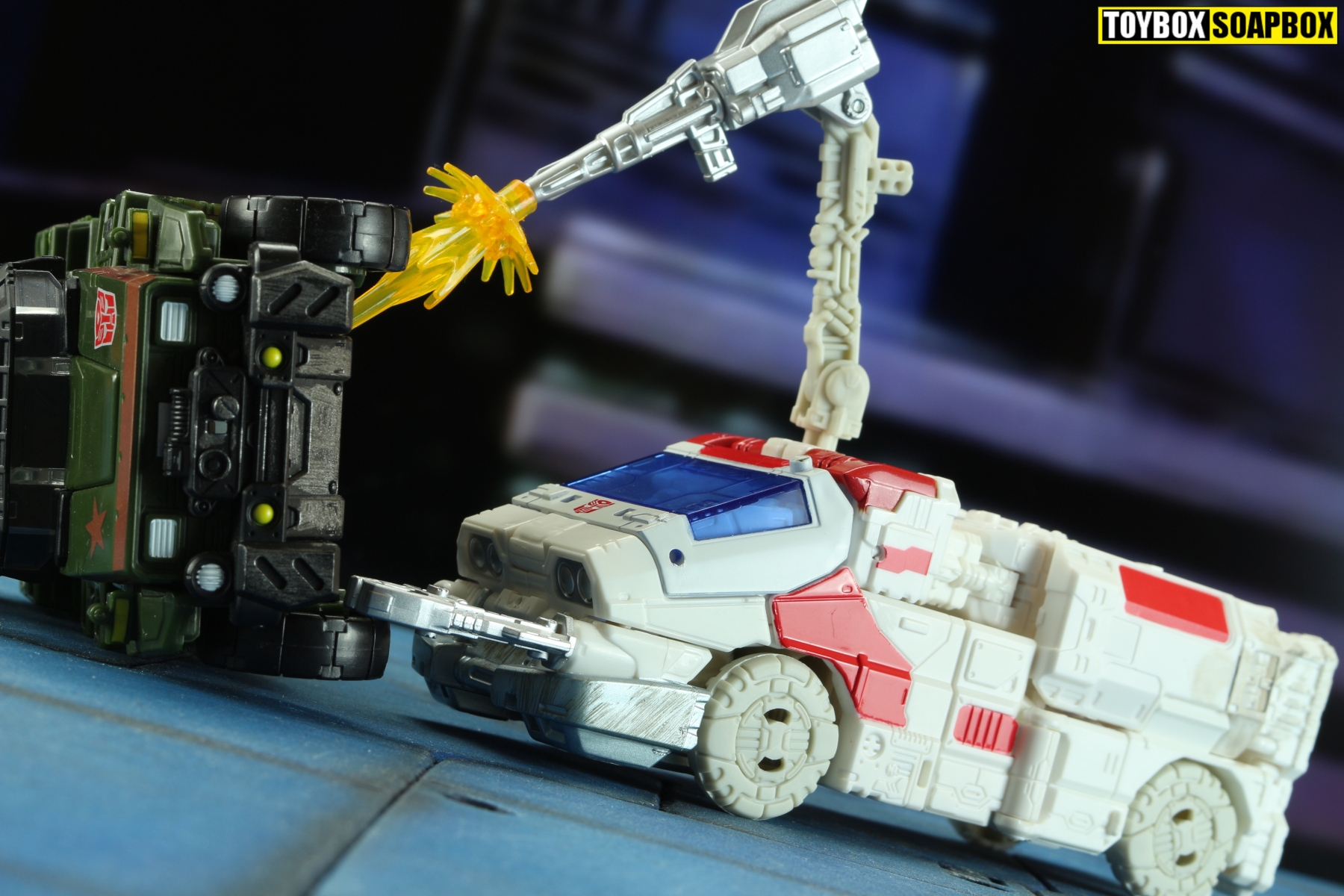 New rear side panels, a new bumper and even new wheels all help to give Ratchet his own unique look. It’s a cumulation of small changes but each adds up to subtlety stretch the distance between Ratchet and Ironhide.Take the bumper, Ironhide’s was a hard edged, heavy-duty piece covered in ports designed for you to stack him with weaponry. In contrast, Ratchet’s bumper is much sleeker and features just two peg holes which speaks to the more delicate,specialised nature of Ratchet’s role as a medic. Ironhide is a warrior who you can load up with weapons and watch him go, whereas Ratchet is the elegant scalpel whose every move is exacting and deliberate. It’s a small change on the surface but the vehicle mode demonstrates that consideration of form and function has gone in to giving Ratchet his own identity beyond just slapping a siren on top. 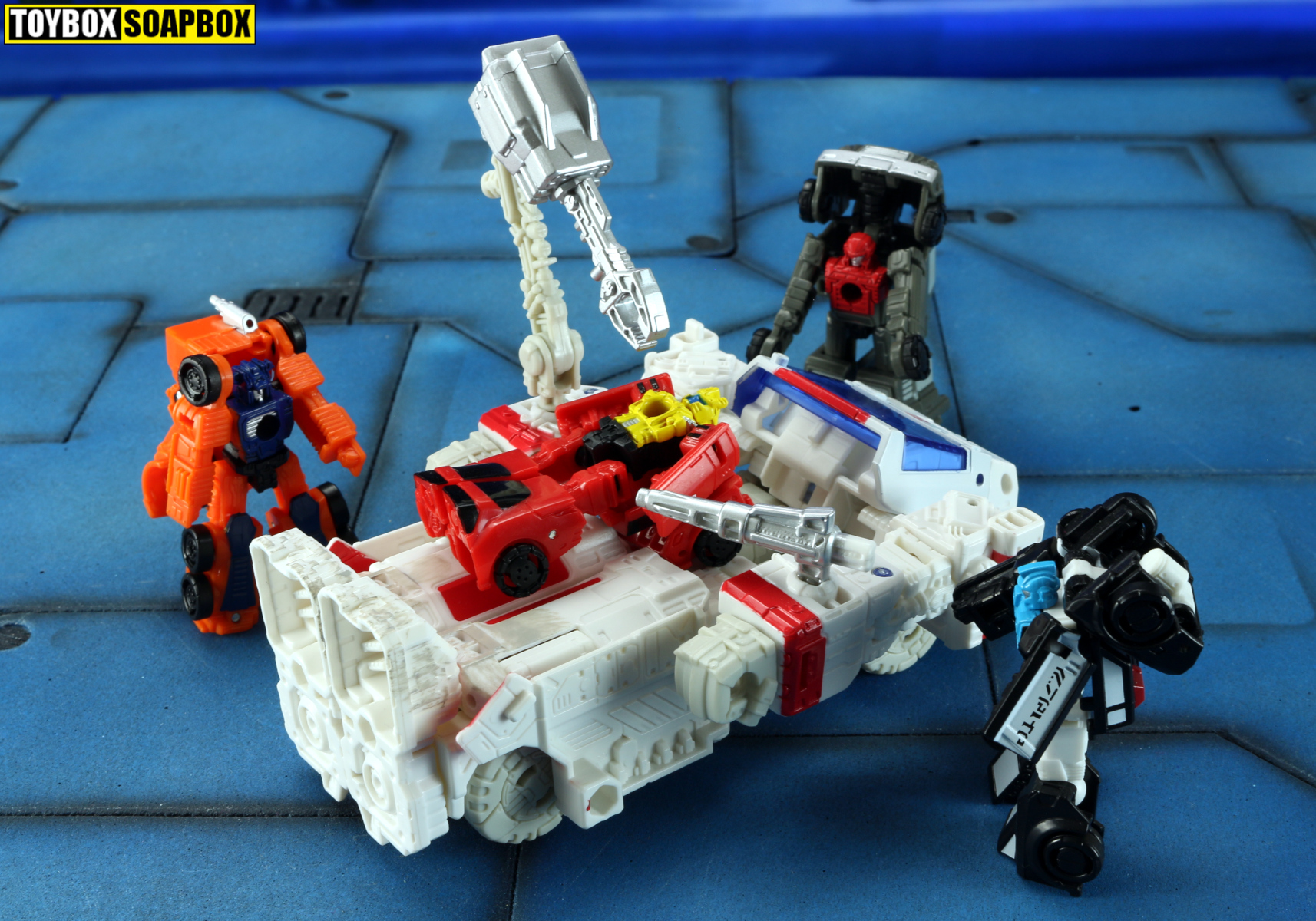 If you caught any of the coverage of The Transformers panel from SDCC you will know that Hasbro asserted, with a straight face, that Ratchet possesses a bonus third mode. Calling it a unique mode is a bit of stretch, but yes – Ratchet can convert into a repair bay of sorts. Really, it is just the halfway point in the transformation from vehicle to robot or vice versa, but someone at Hasbro was determined to validate its existence to the extent they doubled down on it and brilliantly sculpted tiny tools onto his left forearm. The bed of the repair bay is conveniently Micromaster sized, and a tiny part of me is disappointed this toy didn’t come along during Titans Return so his Titan Master could be Charlie from Casualty. 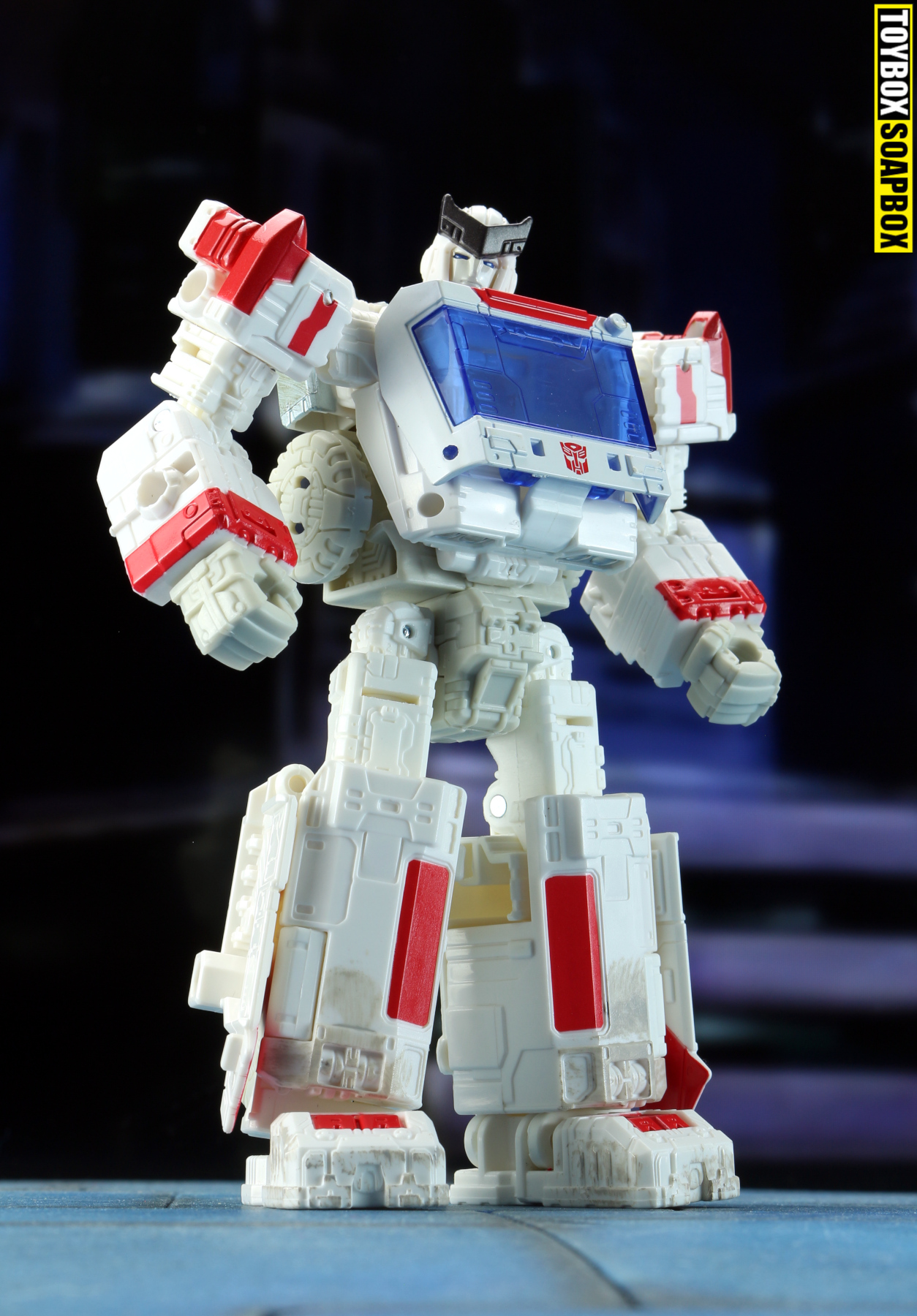 Converting Ratchet from vehicle to robot is an identical process to Ironhide  – but the same can’t be said for his looks. Dark grey’s and muted reds did a great job of conveying Ironhide’s weary, battle worn disposition and the brilliant whites and candy reds of Ratchet do an equal job at suggesting a much lighter personality. One at odds with his function as a medic. By default the boxy, angular frame of this mold carries itself with a certain chunky, intangible weight but the colours on Ratchet pop so vividly that they never let the mass weigh too heavily on his broad shoulders. The tinted blue windscreen is a particular delight and if Toyhax don’t add some small Qunitesson fish stickers then I don’t even understand the world anymore. 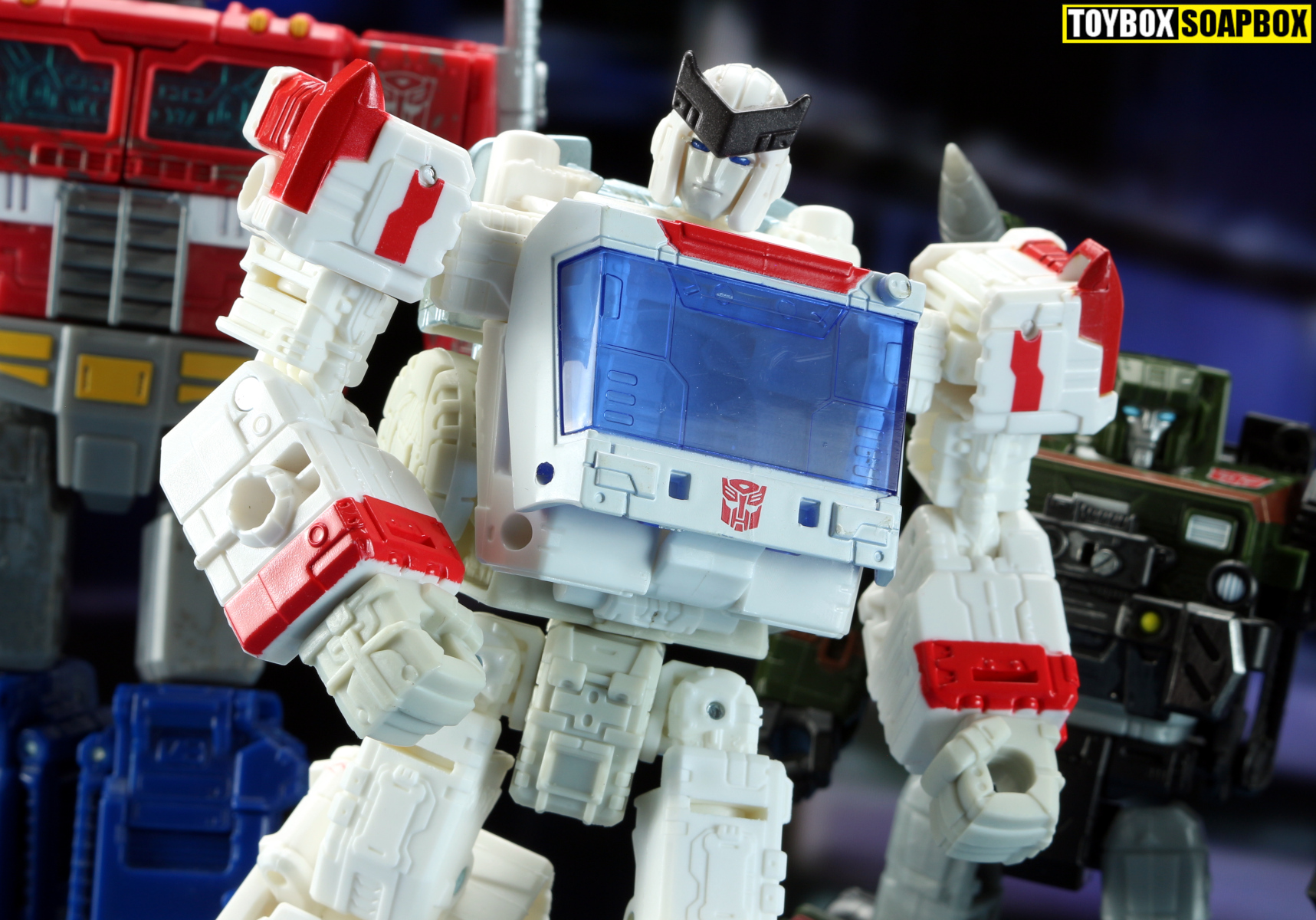 Each time I write about a Hasbro or Takara toy I wax lyrical about their place at the top of the head sculpt league table. Being as you are here, I am pleased to inform you that Ratchet is yet another excellent example and Siege offers a rare outing for his Generation One cartoon style head. Considering how prevalent G1 is across Transformers media, Ratchet is strangely one of the few characters whose classic look and persona have generally been supplanted by other media. Transformers Animated’s re-branding of him as a much older, grumpier bot has become the version subsequent takes on the character lean most heavily on. Siege time warps us back to a much more youthful looking face from long before Ratchet started moaning about kids kicking over his bins, the free TV Licence for over 65’s being scrapped – and all that old people stuff. 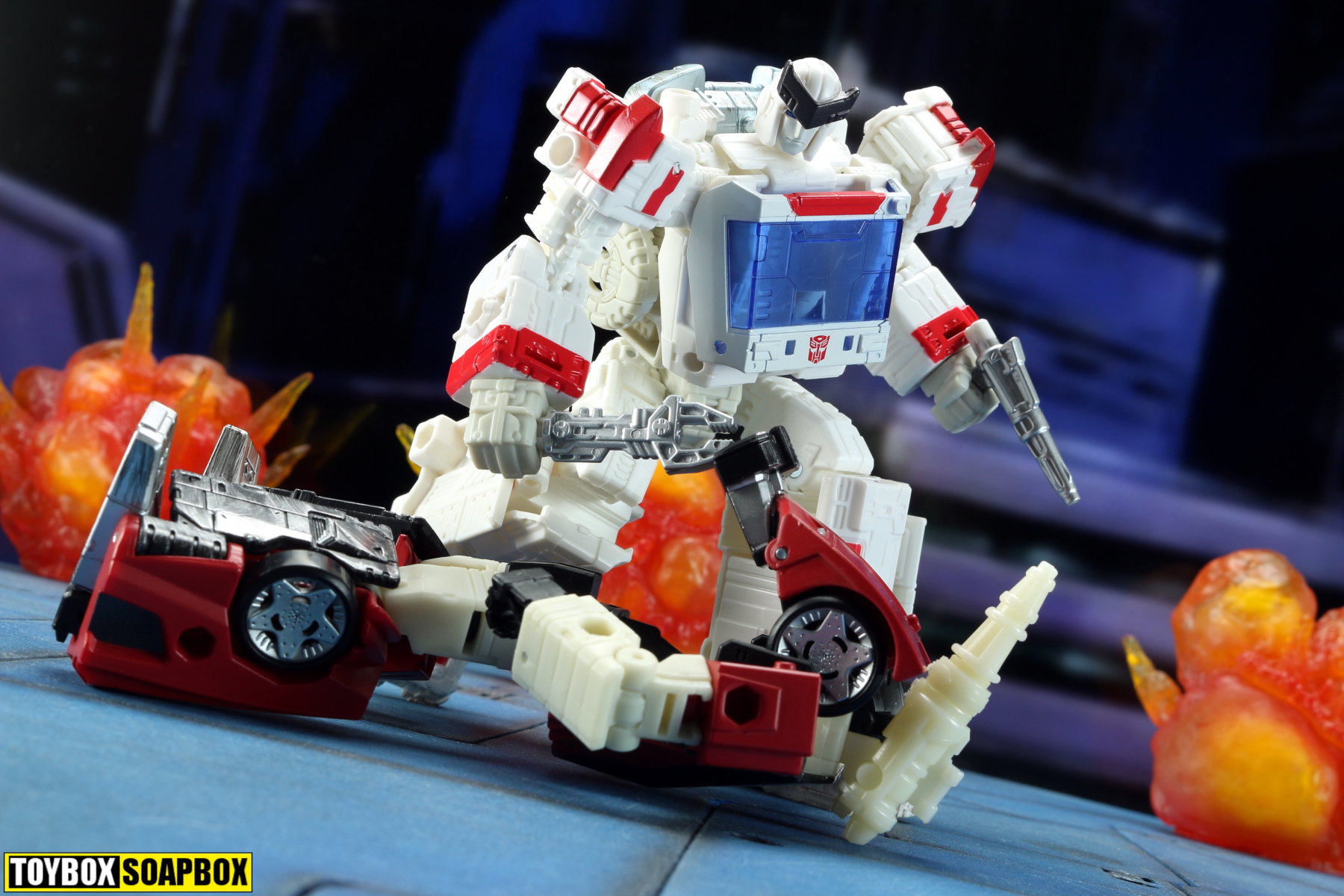 For those keeping score, Ratchet also gains new hands, shins, crotch and new shoulders. Each shoulder features what you could easily mistake for glossy red lipsticks – but are actually halves of his light bar. Veering from the path of G1 accuracy isn’t something Siege is well known for, but the hands and crotch should actually be red (“so should his head” the Marvel Comics fans scream….). However, they are instead cast in an off white plastic that looked a bit iffy in the promo pictures but in hand looks absolutely fine. One place Hasbro’s hand was forced is the symbols on the face of the shoulders. Owing to the Red Cross symbol status as a trademark, in recent years Hasbro have tended to use generic medical style symbols but with this figure Ratchet gets wonky red lines that look like someone nudged him whilst he was applying his make up. 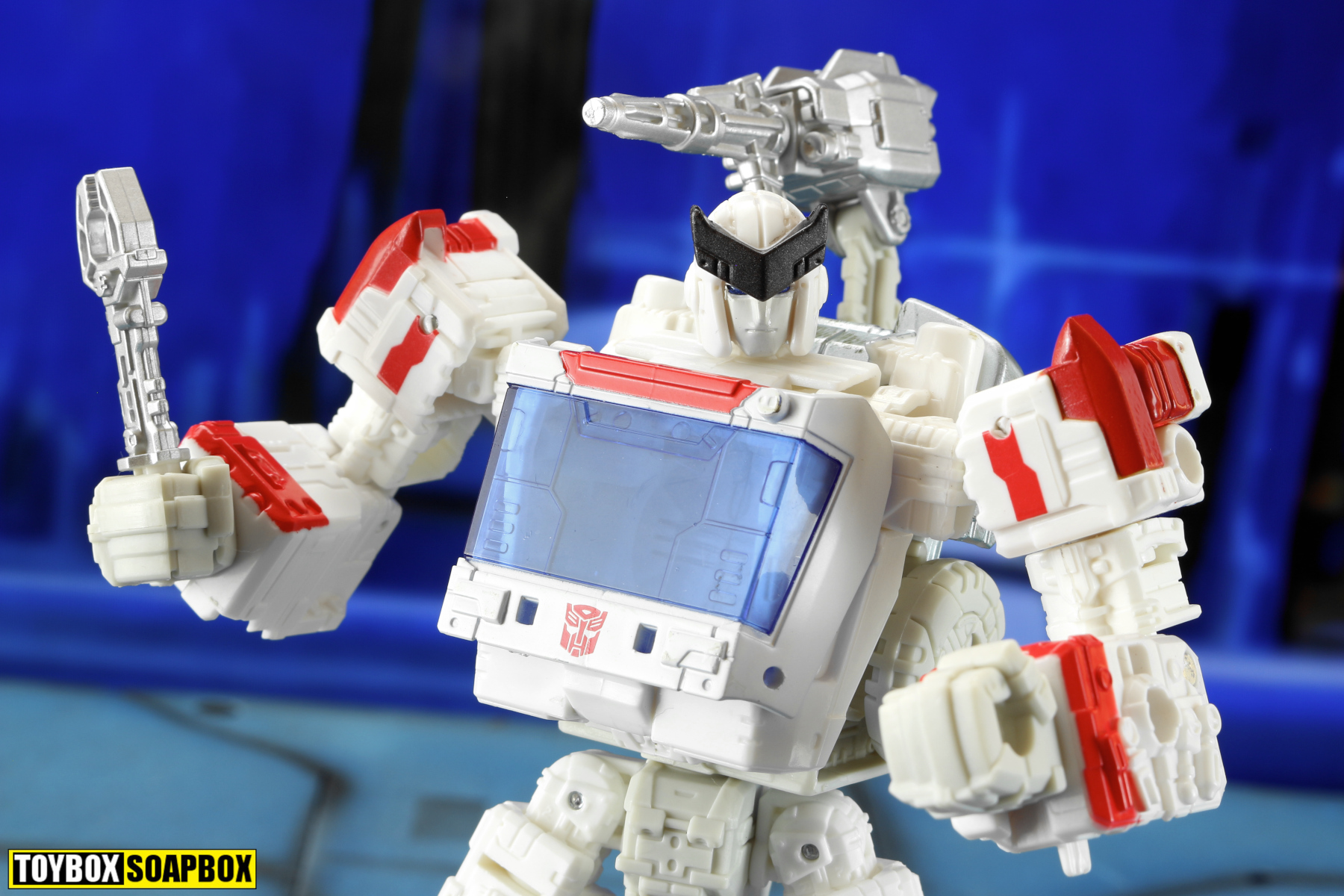 A core component of the Siege toy line has been the interactivity between accessories, and perhaps it’s due to his status as an exclusive but Ratchet comes with an unusually large bundle of extra bits for a deluxe. Most bots get weapons regardless of whether they are the Decepticons most ferocious warrior or Alpha Trion’s mortgage advisor. Being set against the backdrop of a multi-million year war tends to blanket every character with the definition of soldier, but I always appreciate it when Hasbro makes an effort to play to a characters vocation or unique personality traits. As the Autobot’s chief medic, the small spanner Ratchet comes with makes more sense than a bazooka, and the multi-hinged repair arm pays homage to the battle sled of his vintage toy and can also double as a missile launcher. A small rocket can detach from it to either wield as a welding torch or a piping bag for cake decoration. 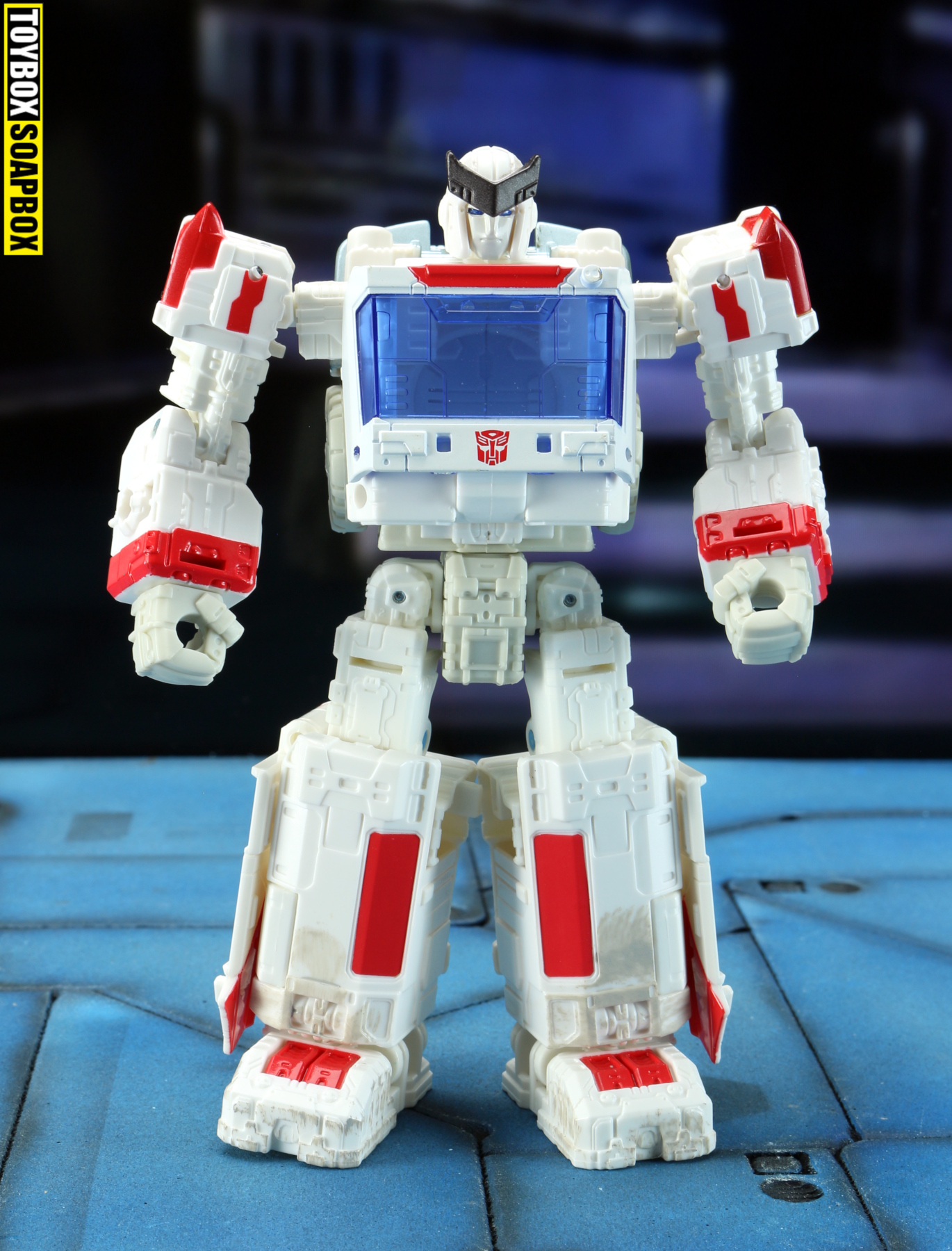 Hasbro haven’t changed anything relating to the articulation but the QC on Ratchet is much better than it was on my Ironhide. I can only go by the figures I own, but Ratchets legs are much tighter and the two side panels actually clip in securely. Paint is tidy and clean, with the divisive battle damage effect, that the line is synonymous with, only really threatening his feet and shins. Again, it’s another figure who is immaculate for the most part and the weathering effects are localised to a small area. As I’ve said in the past – if they aren’t going to go all in then it would be best to not do it all. This almost apologetic approach doesn’t really suit anyone and the upshot of this is it looks like Ratchet has stepped off the production line and then stepped into a muddy puddle. 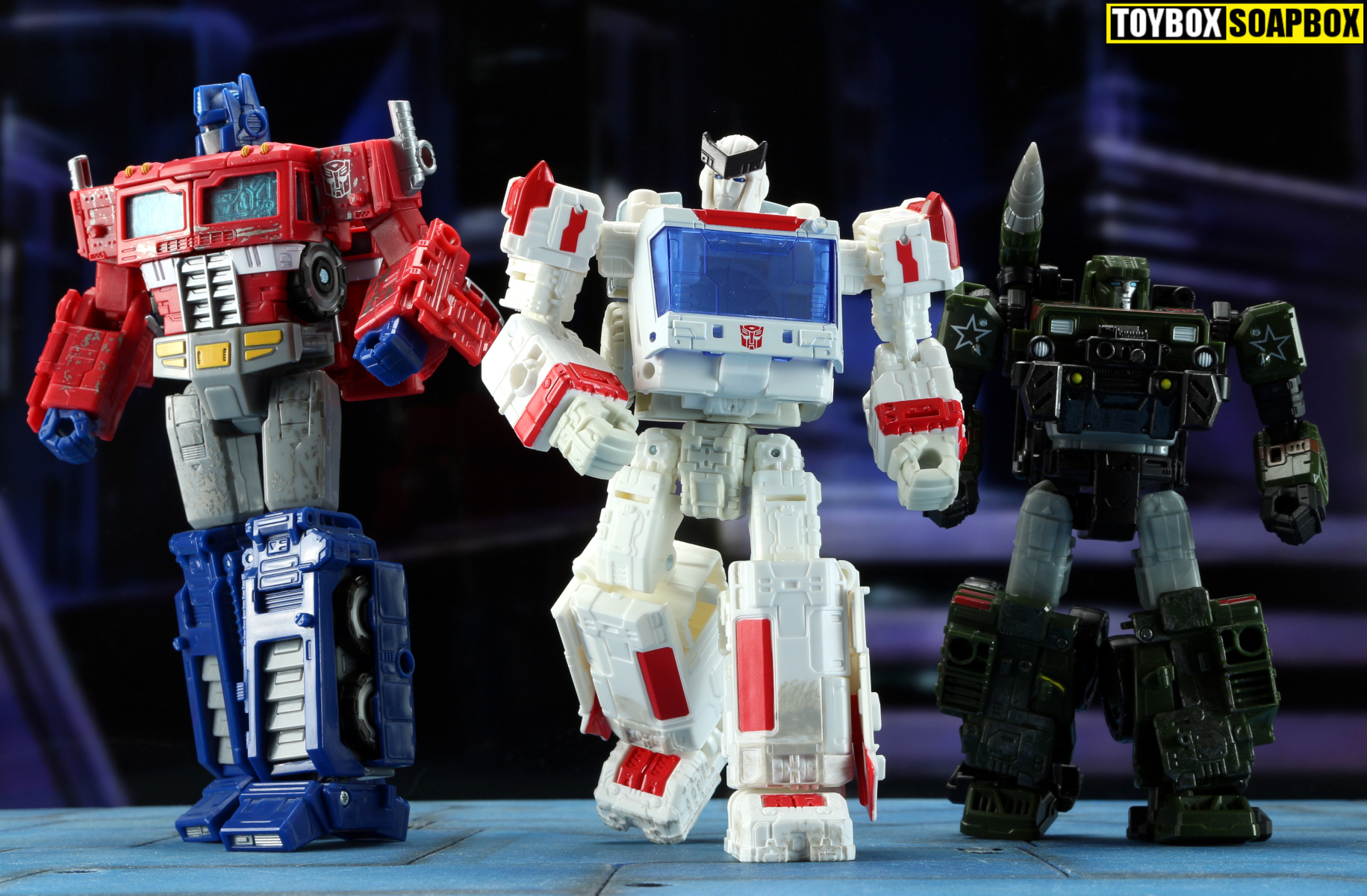 Almost everything about this toy screams high levels of care and thought from somebody who really wanted it to be something special – except the distribution. At the moment Ratchet is only available in parts of Asia, and when he does land in the west it will be as a Walgreens exclusive. So US folks should be happy but what about the rest of the globe? Why Hasbro opted to lock such a beloved character that fans have been demanding for almost a decade behind a wall of exclusivity is mystifying. Considering how often we see the other 1984 Transformers characters, it’s remarkable that it’s taken this long for Ratchet to make a reappearance. That he repeats his predecessors misfortune in being a difficult to secure is a rare negative mark against an otherwise excellent figure. Ratchet is at his core very similar to Ironhide so if you don’t like that toy then this guy isn’t going to be for you either. But if you do – then this is one to get.

If Hasbro allow it.

One Reply to “Review: Siege Ratchet”