One of the first Transfomers I got, way back in 1980something, was Ironhide. A red minivan that split apart into a mobile missile platform as well as a robot with no head. Unsure what was going on, I spent an inordinate amount of time trying, and failing, to convince my Gran that it must be broken because the head was missing. As child of cable I was already familiar with a very different looking Ironhide from the cartoon, and was convinced Hasbro had just made it wrong. Thus began a quest to one day get that perfect Ironhide toy.

Enter Siege. When this figure was first revealed my heart leapt tall buildings in single bounds, and when Kapow sent the dispatch email to my Inbox a couple of weeks back I half considered trying to hibernate for two days in effort to travel forwards in time faster. And now it is here.

You want to know if it’s any good, right? Well read on… 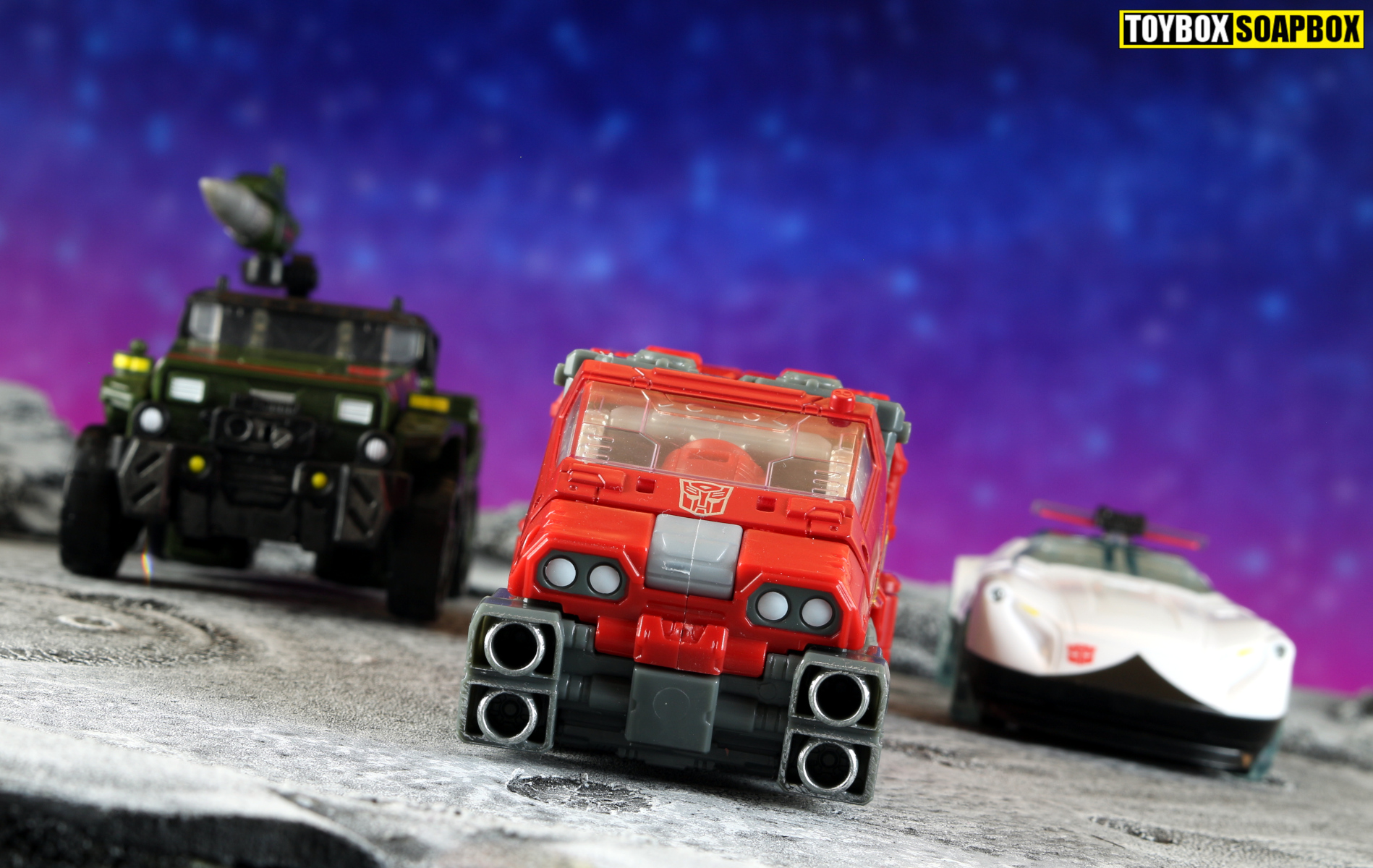 Ironhide’s vehicle mode takes cues from Dreamwave’s long forgotten War Within Comic book series. Turning into a space minivan that pays homage to his Generation One form, it spins this mode into a machine far more suited to transporting groceries around Cybertron’s myriad robo-fruit and veg stores. Siege has tended to lean on the side of stuffing 80’s Earth vehicles into Cybertronian shells and that’s largely what you get here. It’s not an exact recreation of any vehicle we know, but shape and detail are used to suggest familiarity, and it’s something you’d expect to see made by Nissan, on Tomorrows World. Siege has been great for that, melding the futuristic with influences from the original vintage Earth vehicles these characters original toys were based on. Thus we can have an 80’s anime inspired, blocky red van, being flanked by a curvacious 70’s sci-fi inspired Datsun, and rolling fist Colonial Marine Jeep.

In space, no one can hear you minivan. 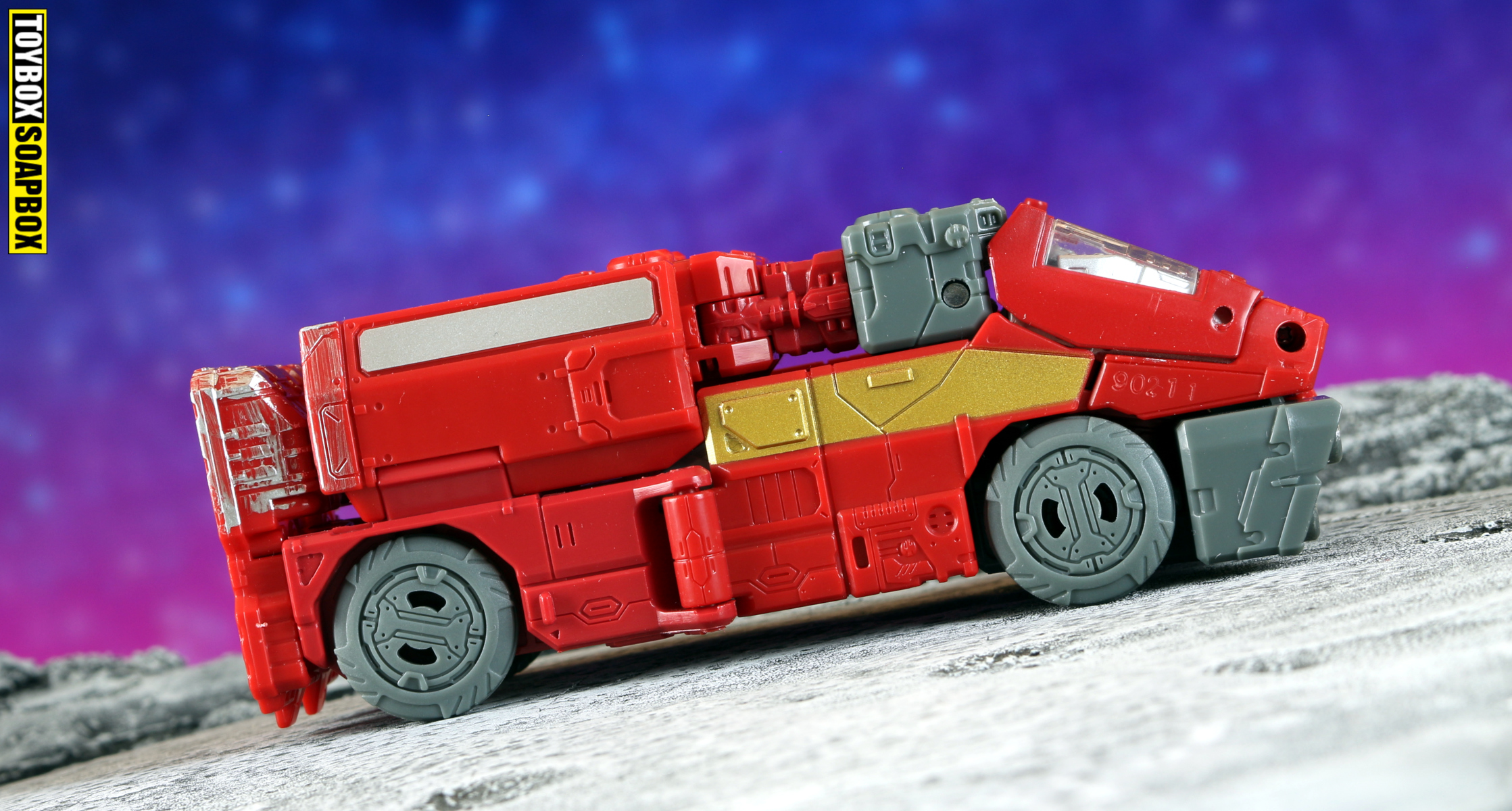 With such an emphasis on nostalgia there is bound to be compromise somewhere, right? A fly in the ointment, a monkey in the wrench, a pain in the….aft. Made up alien vehicle modes always earn some amount of leeway in how they hide their inner robot soul, but Ironhide goes for the vehicle mode equivalent of shoving his hands in his pockets. Having his shoulders and elbows on display whilst his hands are tucked snugly into his lower legs. With much of the vehicle being composed of panels it’s a shame that they couldn’t stretch to covering that extra section, or the obvious feet dangling off the back. Enterprising Shapeways wizards will no doubt be falling over themselves to remedy that.

“Come to me, cover me, hold me. Together we’ll break these chains of lovvvveeeeee” 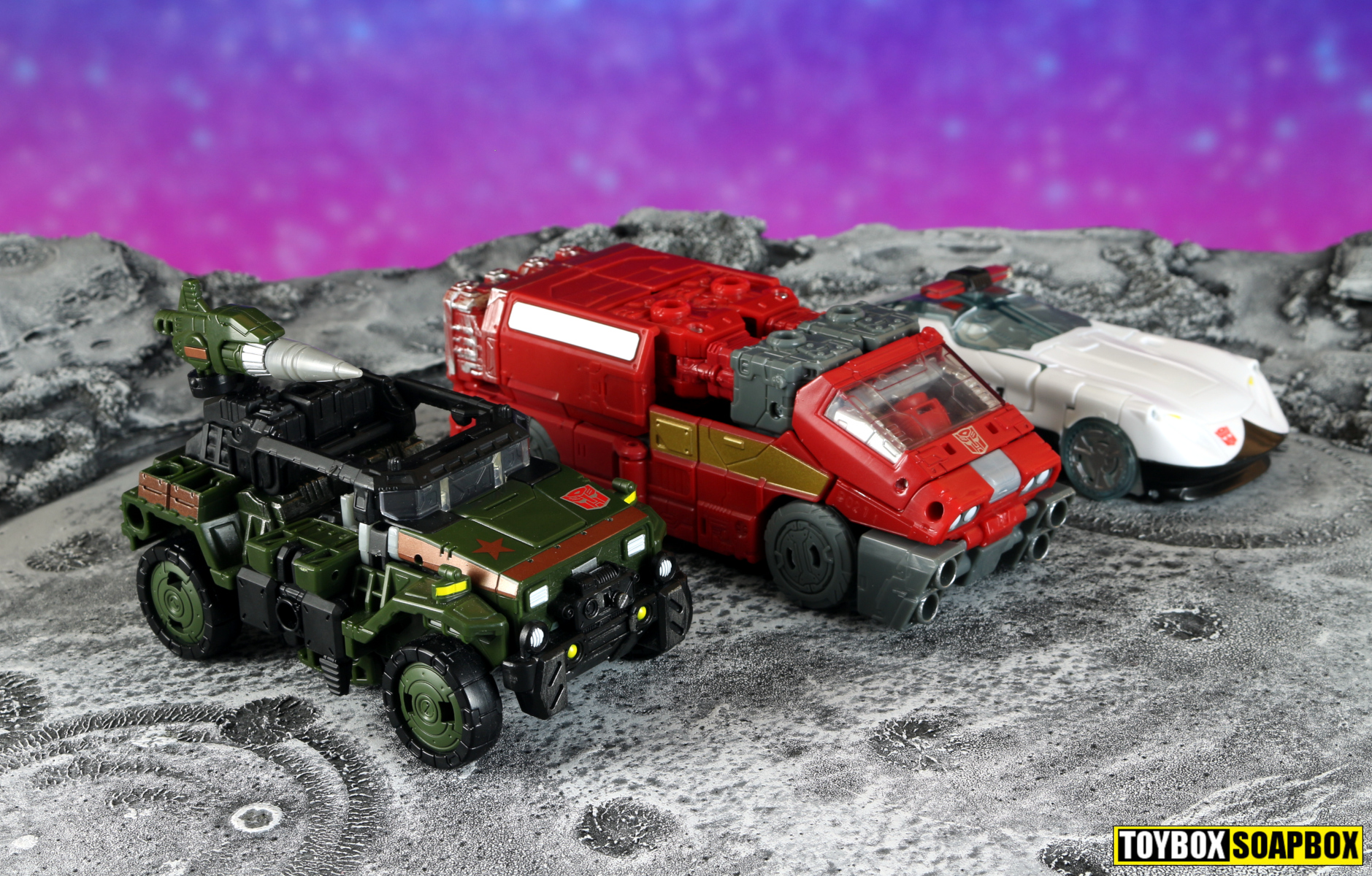 Saturated red plastic is used for the majority of the figure with occasional light grey pieces offering G1 accurate contrast. A clear plastic windscreen allows you to peek inside the cabin and see the back of Ironhide’s head. It’s a shame you can’t fit Dianuats or Titan Masters in there but on the other hand it’s a hysterical, probably unintentional, throwback to the vintage toy having that mad robo face sticker in the same spot. It’s an oddly large cavity for just a small head and I bet somebody customises a Headmaster Ironhide out of it. Back to the paint, and small dots of the stuff pick out white head lights on the front of the truck, and though it may seem a trivial thing to mention, its an example of Hasbro making an effort with the smaller details where previously thier answering machine would have directed you to Toyhax. A brush of gold gives you half of Ironhide’s signature vehicle striping detail, which is cut off faster than a Kanye West stage invasion. 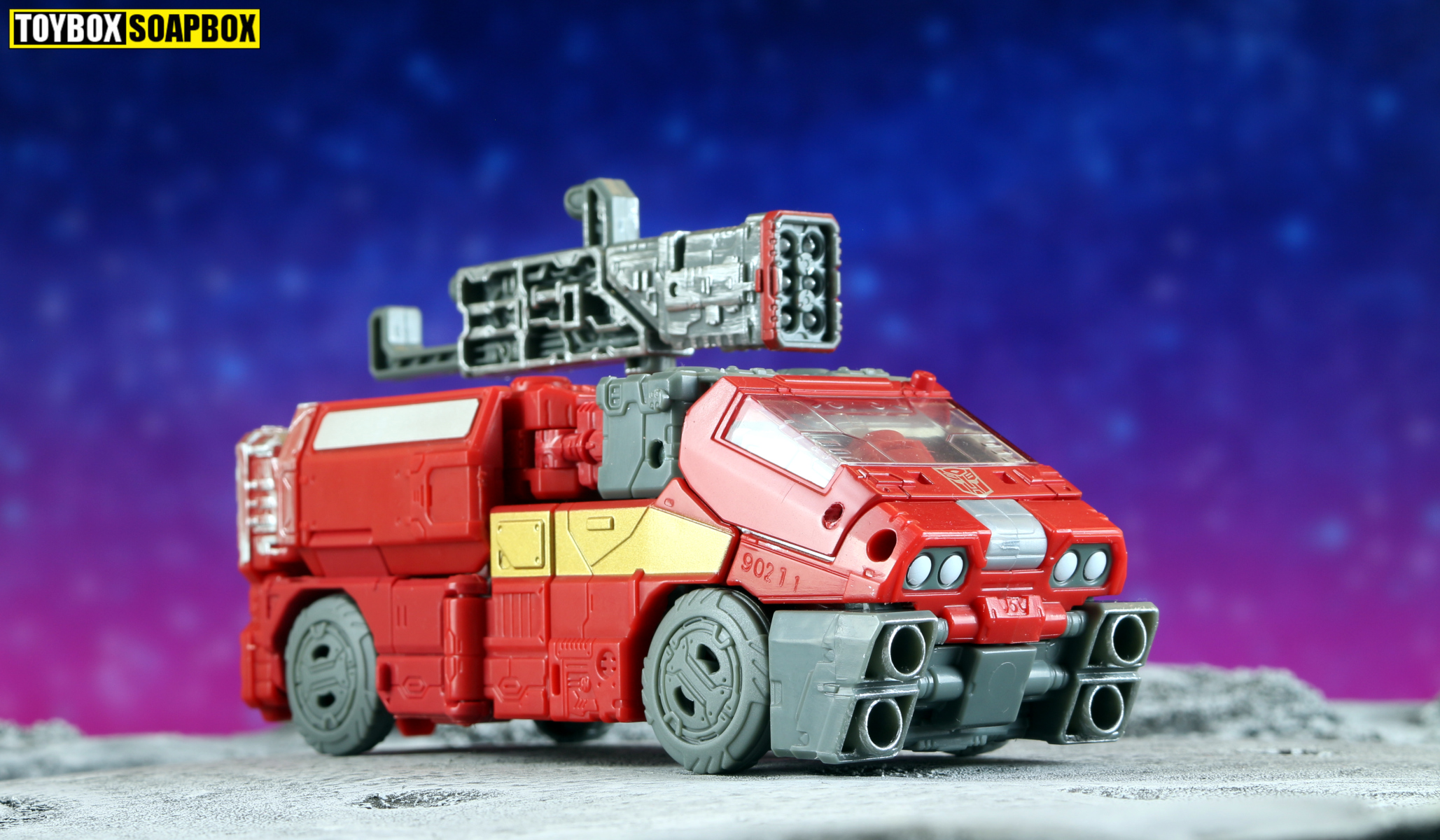 Battle damage paint is still a thing, but as with most of Siege there’s a reluctance to go all in with it. Ports on the front grill, and the obvious feet on the rear the vehicle are the only places it’s applied. Not to keep beating this drum but weathering is good because it offers something different amongst shelves of pristine robots who have allegedly been at war for literally millions of years – but Hasbro’s desire to please all masters falls flat. If you are going to add this sort of detail then it has to blend in with the whole figure, not just be lashed on to small areas. As a result poor Ironhide looks like he’s having a nightmare of a day, having reversed into a bike shed and then driven into a bollard. 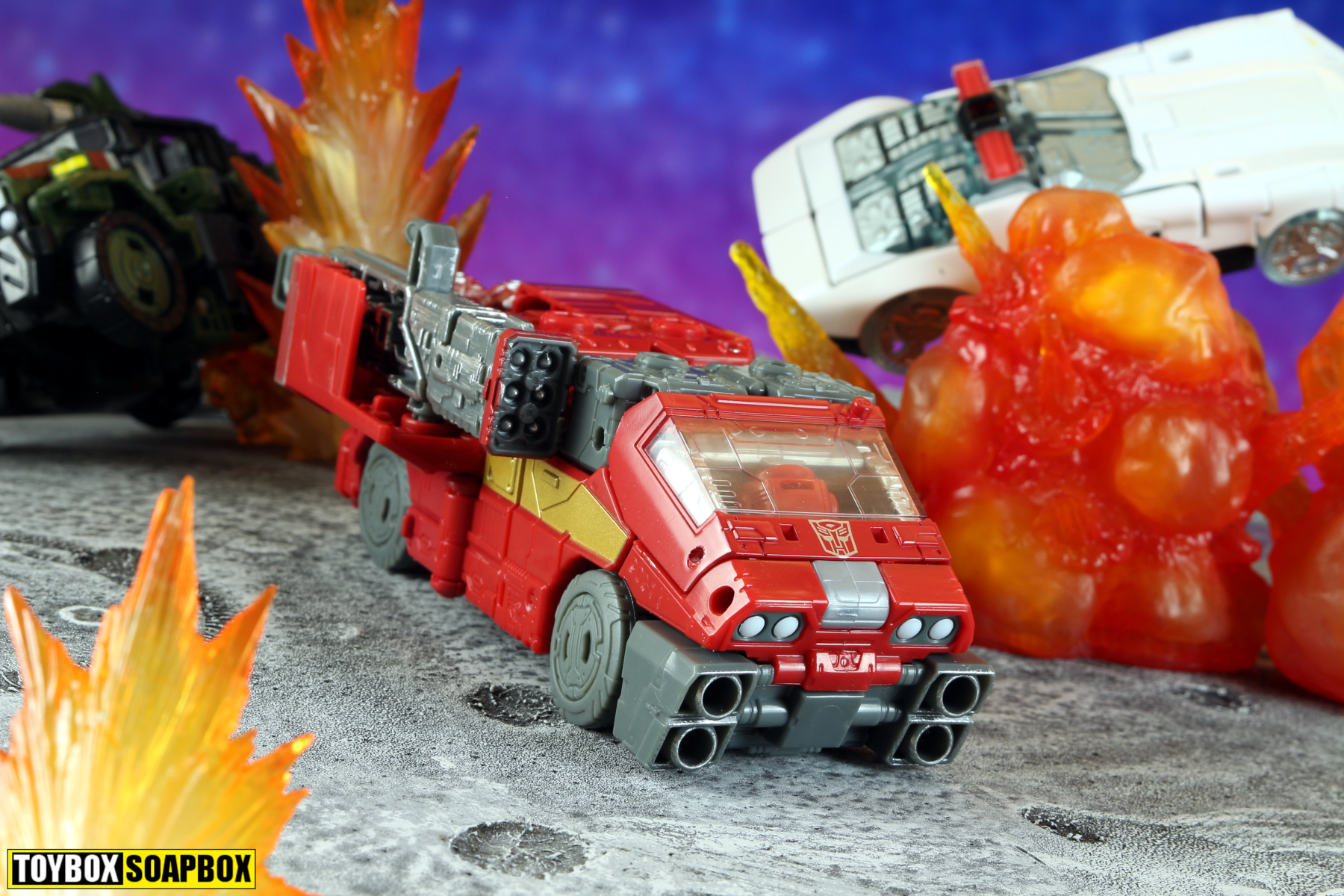 Aside from a couple of gripes about gaps, the vehicle mode itself is locked together tightly and rolls nicely enough. This is not a mode that comes apart in your hands or suffer from bits popping open. It also features the many pegs and ports required for compatibility with Siege effects parts and the severed limbs of Cog or Sixgun. His own weapon can peg into any of the ports on the top, or you can pop open the side and use peg holes in there to give him a M.A.S.K. style battle mode. 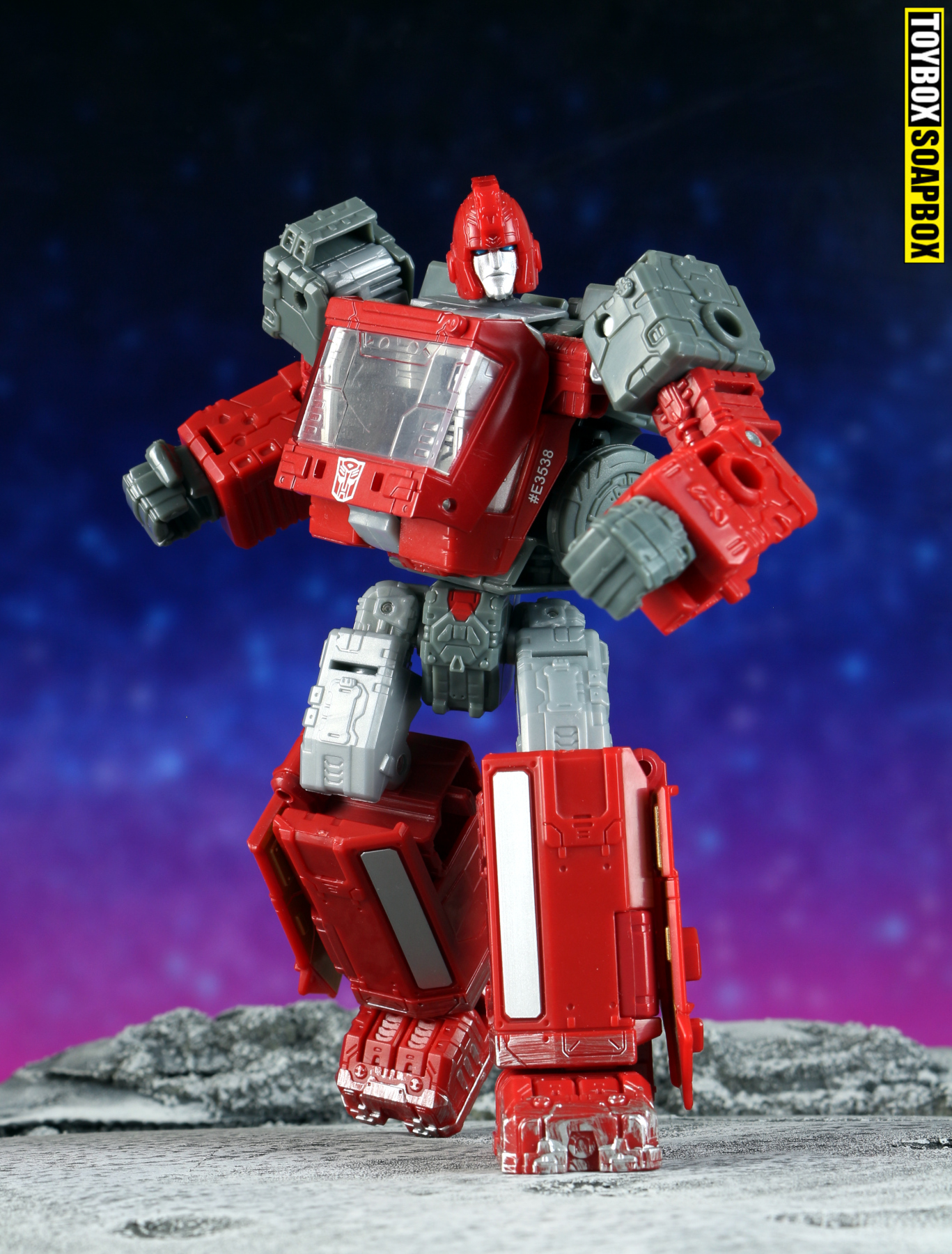 Conversion from space minivan to robot is one of my favourite transformations Siege has thrown out so far. In an era of high end complex collector focused figures, it’s nice to also have a line of figures that puts the nostalgia of quickly transforming the toys back and forth right at the heart of it without sacrificing looks or articulation. For me, that’s the connection to my childhood. It isn’t lining them up on shelves and worrying about dust, or searching for paint defects, it’s picking them up, switching between modes and for a brief moment living within the world of these characters via the Warp Pipe to level 2-1 of my imagination.

Panels unfurl and compress to form the legs, with the sides of the van folding inwards to become the shins.  Fully covering the area up to leave no hollowness is a clever and very welcome touch.  Finally, the arms fold out and spin with the whole chest, with the grey front grill piece flipping up before the head clicks over them to lock it all into place. It’s a nifty process that leaves very few hollow areas. 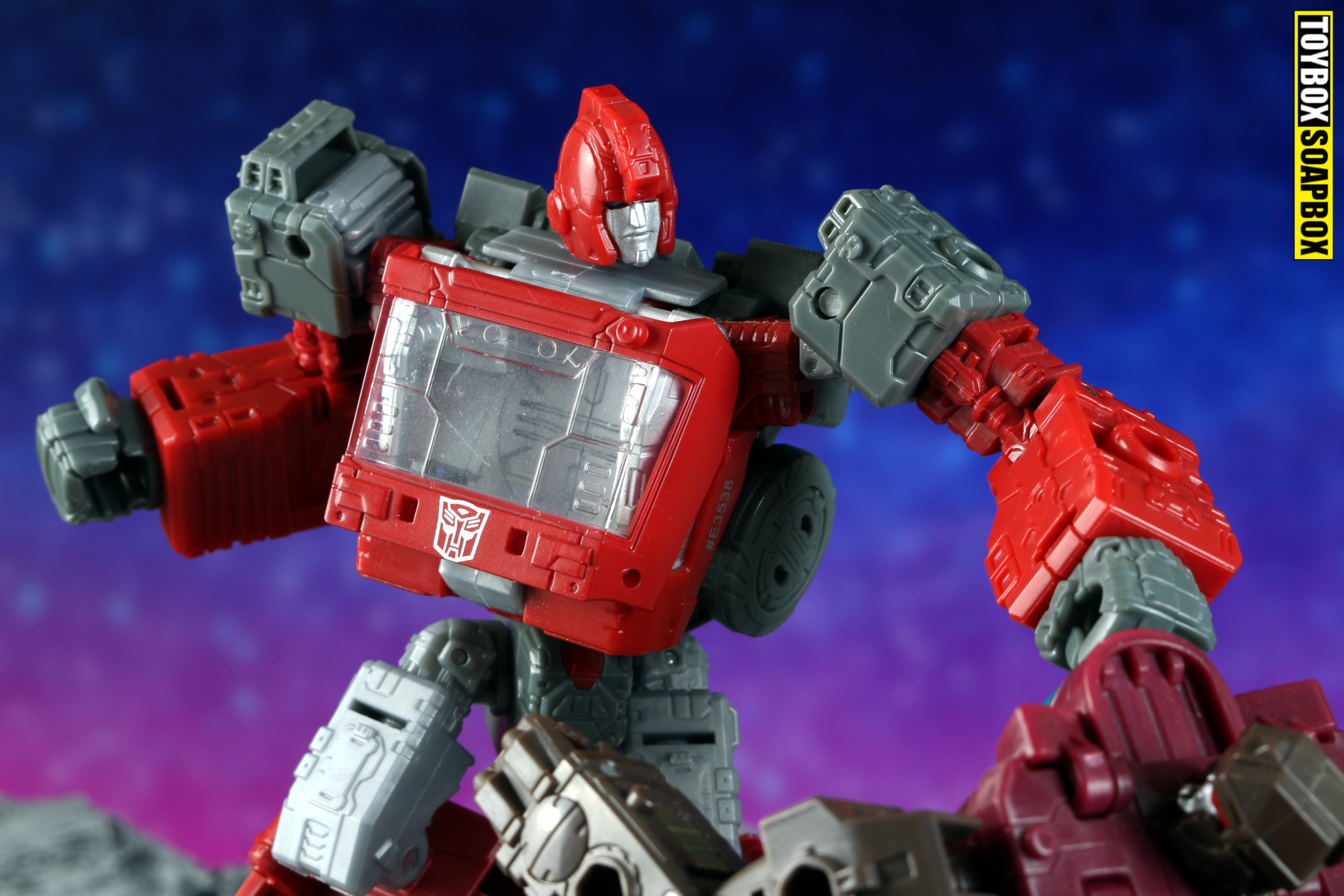 Contrasted with Prowl’s smooth curves, Ironhide is resolutely square and angled. As much an opposing force in shape as he is in personality. It’s this that cuts to the core of what I love about the original Transformers premise. It’s a group of random bots, from all walks of life, in all shapes and sizes, who’ve banded together to fight bad guys. They aren’t all manufactured soldiers, each is distinct visually and that’s put to use to illicit personality. Ironhide’s brick like shapes, and bulky proportions are as much a reflection of his identity as the words that come out of his mouth. He is the bot with shoulders broad enough to carry the weight of the entire Autobot cause, who sees everything as black and white, follows orders and is content to solve any problem by smacking it in the mouth. 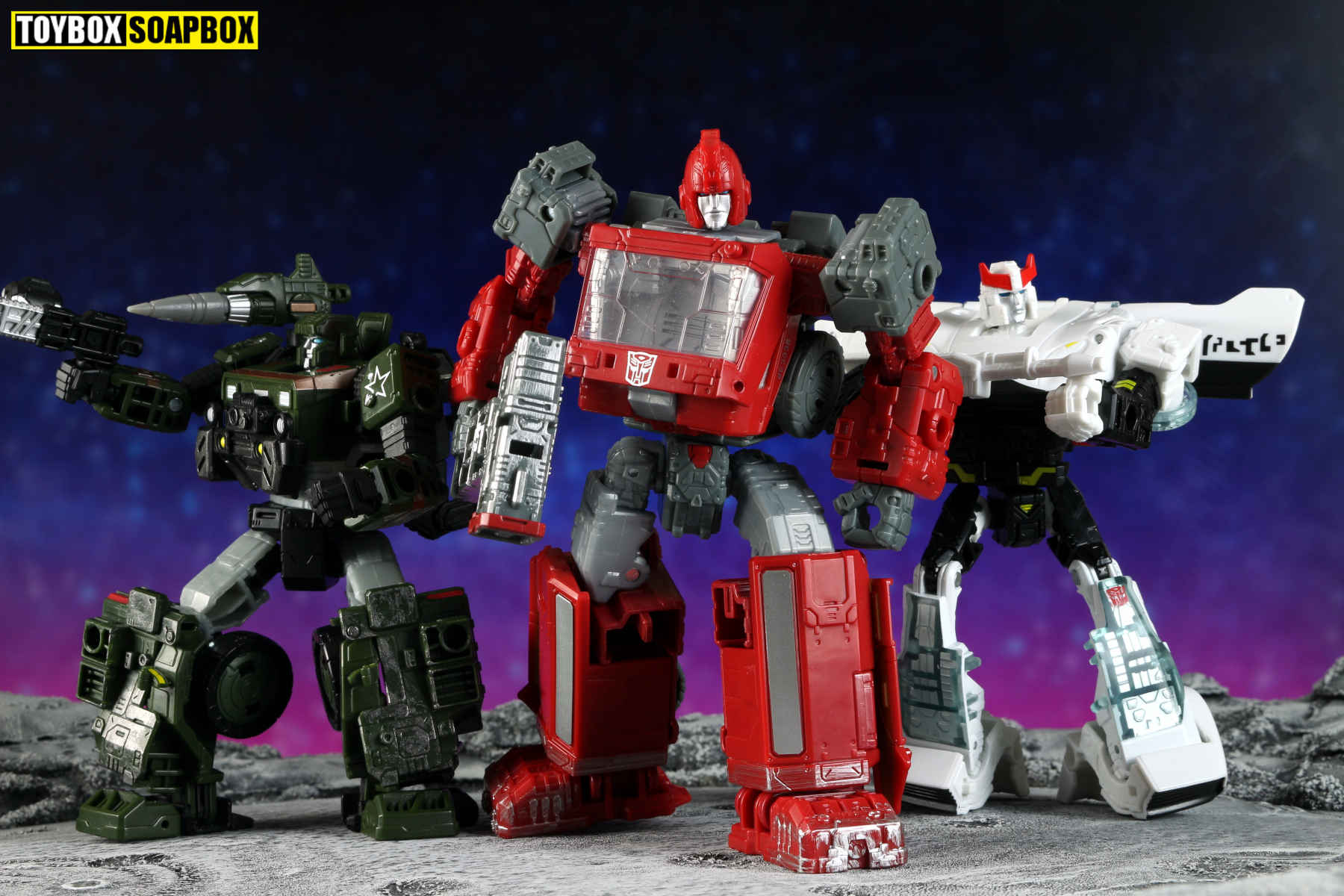 We’ve had many interpretations of Ironhide over the years but this is the first, in this writers humble opinion, that really captures the personality of the G1 character. If the Masterpiece is an accurate representation of the animation model, then this is the personification of  that curmudgeonly attitude. Not content to just let the body do the work, Ironhide has another belter of a head sculpt. Personally, I believe this is the best he’s ever had as the Roman style helmet is still there, etched with extra detailing to stop it looking bland against the body, and housing a face that is just desperate to shout at kids to get away from his bins. 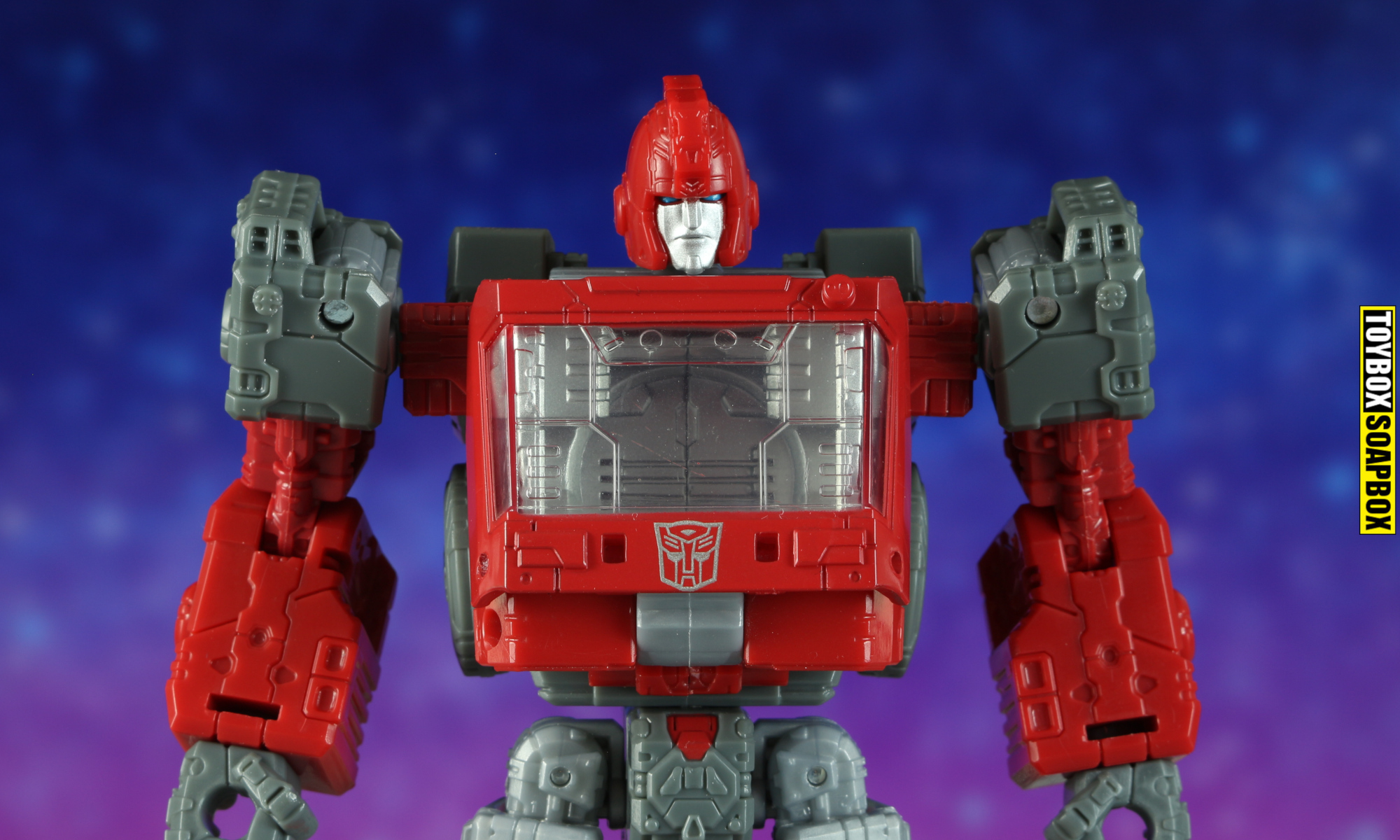 Posing is only really hindered by Ironhides own blocky form, so there will be no surly crossing of arms, though he still poses as dynamically as a walking game of Tetris can. The joints on the arms are stiff enough to hold his rocket hammer up in dramatic smashing poses and even though his legs are much looser, they aren’t floppy enough to topple over Uncle Albert style, into the Nags Head cellar. It’s great that we have ankle tilts at all, but with his feet being so massive it’s a shame there isn’t also forwards and backwards movement. The huge size of the feet means they tend to get in the way when attempting to get him into a dynamic pose.

Mine has a panel on the outside of his left leg that won’t peg in for whatever reason, but it’s so minor a gripe I already regret typing this sentence. 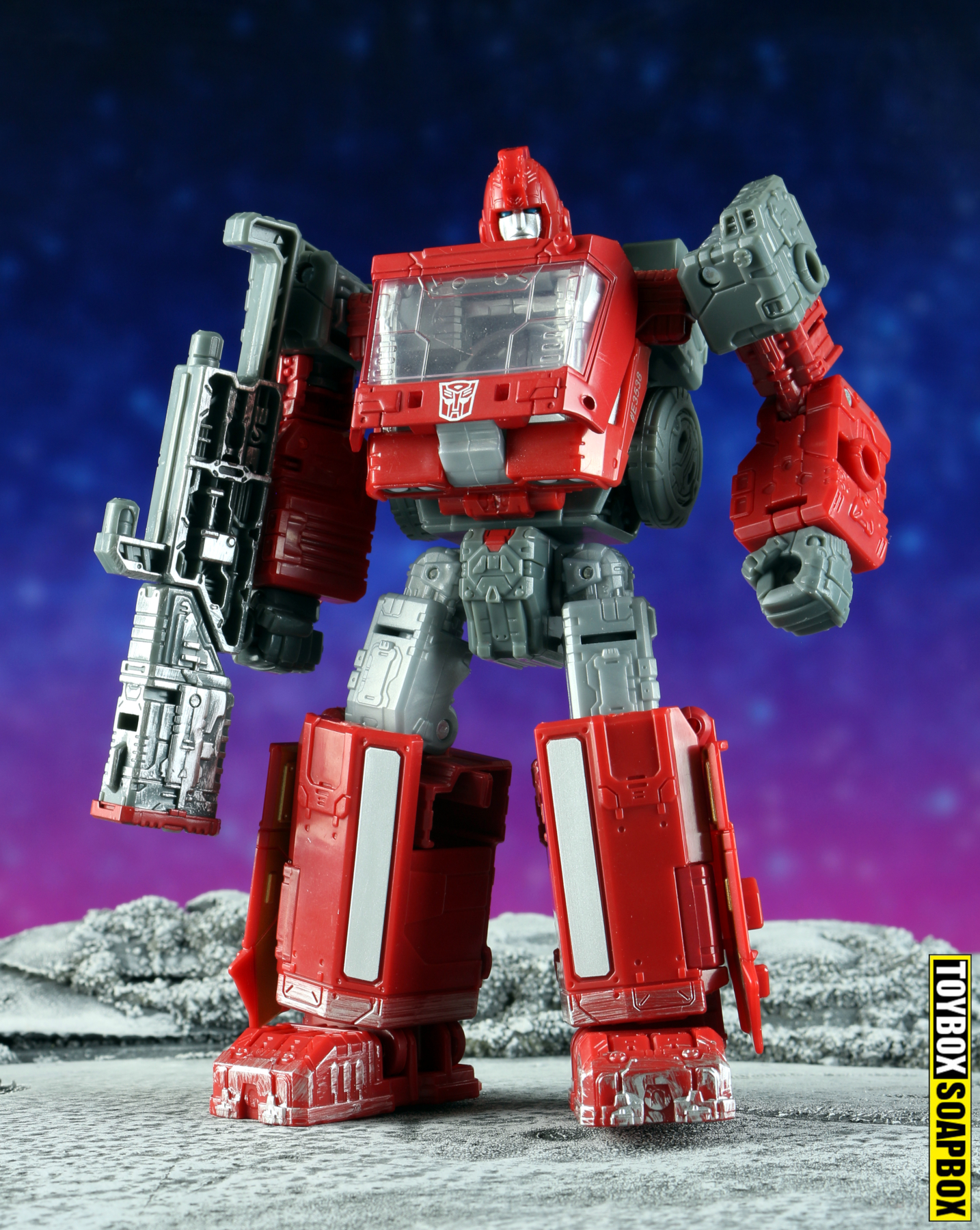 Half of Ironhide’s original toy was able to covert into a mobile battle platform. We aren’t in such exciting territory here, but if you are like me and fancy a reach, his lone accessory channels a tiny portion of this Diaclone spirit by being able to transform from massive, nonsensical rocket launcher, to massive nonsensical rocket hammer. Remember that episode of The Simpsons where Homer invents that battery powered hammer? I swear that’s what this is based on.

Various ports on his body allow him to make use of it, beyond his hands, and any compatible accessories. The sheer volume of these ports allows him to carry an ungodly amount of weaponry, and fits neatly in step with the tone of his alt mode being based around transporting items. It’s just this time it’s massive guns. Lots of massive guns. 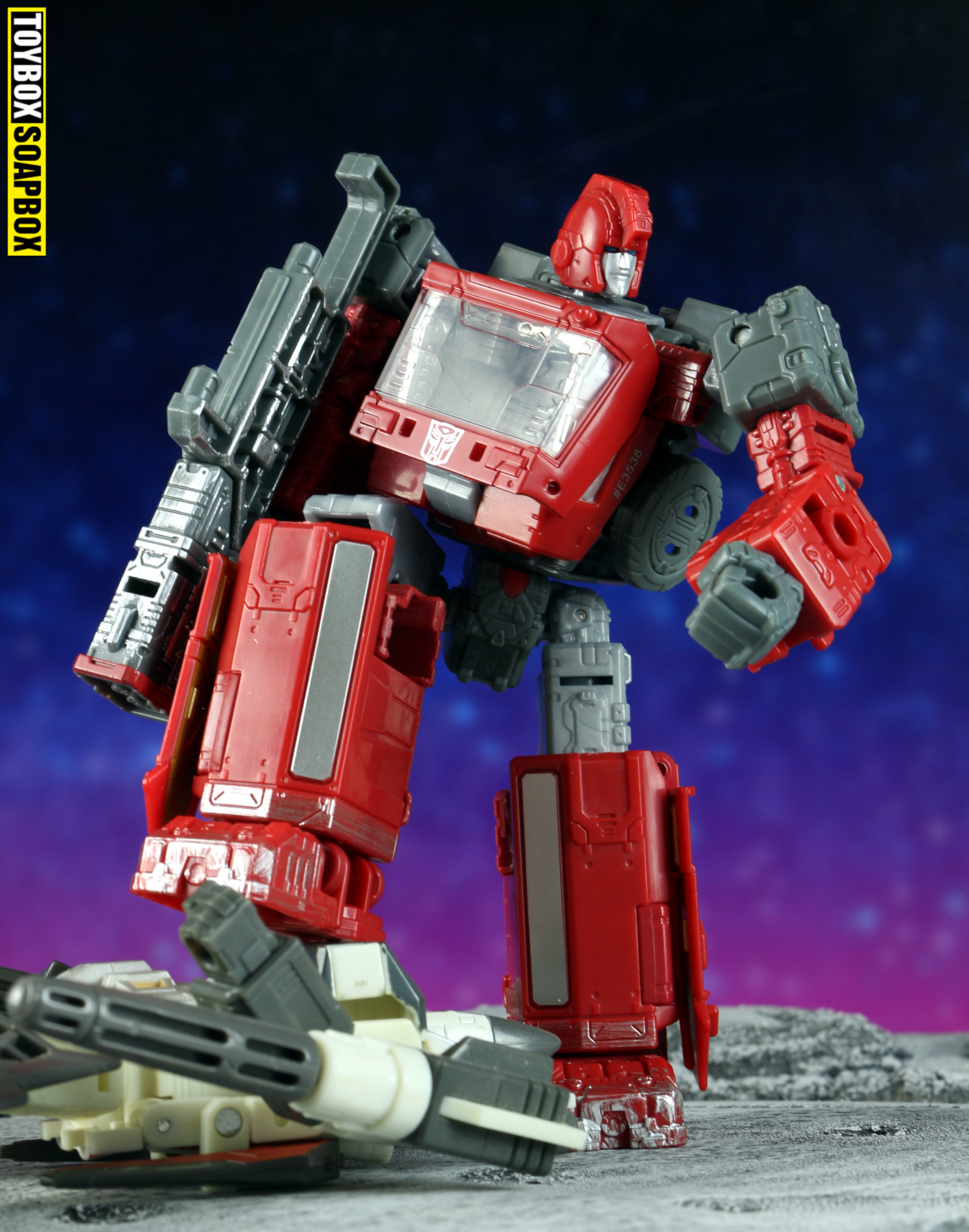 G1 was a hodgepodge of different toy lines that gave life and personality to toys of varying shapes and sizes. For many the defining characteristics were the vehicles they transformed into, and Siege has made sure to stick tightly to those notes by ensuring the past echoes the future. It’s an approach that works great and demonstrates the difference between slavish accuracy and nostalgia. We aren’t getting mini, licensed Masterpieces, but it is no less of a recreation of the character we remember in our minds eye. Character comes from more than just total unbending accuracy, and that has been the greatest trick has pulled so far. It’s a reminder that you can go back to well but still pour something new without losing what made the original so great. Now we are revisiting past Cybertron to see what would inform Teletraan 1’s Top Trumps “Classic Cars” picks much later. At least fictionally, as a way to excuse 80’s animation and warrant sending people from 2019 back to 1984.

For Ironhide this all leads to a wonderful, G1 inspired frame, with lush detailing, good articulation,  packed into a futuristic minivan, that makes the most of both the old and the new. In a nutshell: one of the deluxe toys of recent years.

Thanks to Kapow for sending this toy over, and if you want to pick up your own Siege figures then check out their online store via this very convenient link: GO BUY TOYS