Only yesterday I was lamenting, in an as yet unfinished article about Energon Starscream, that on occasion I get this weird urge to blow money on toys that I normally wouldn’t buy. Yesterday was a text-book example of this scenario in action. Nipping in to Smyths toy store on my lunch, I thought I’d take a quick look at all the toys I either already owned or couldn’t afford to with no intention to buy anything until I saw a new Jetfire figure from the Cyberverse “Power of the Spark” sub-line, and two minutes later my bank account was £15.99 lighter.

Sigh, let’s take a very quick look at what my sickness for buying Jetfire figures bought me. 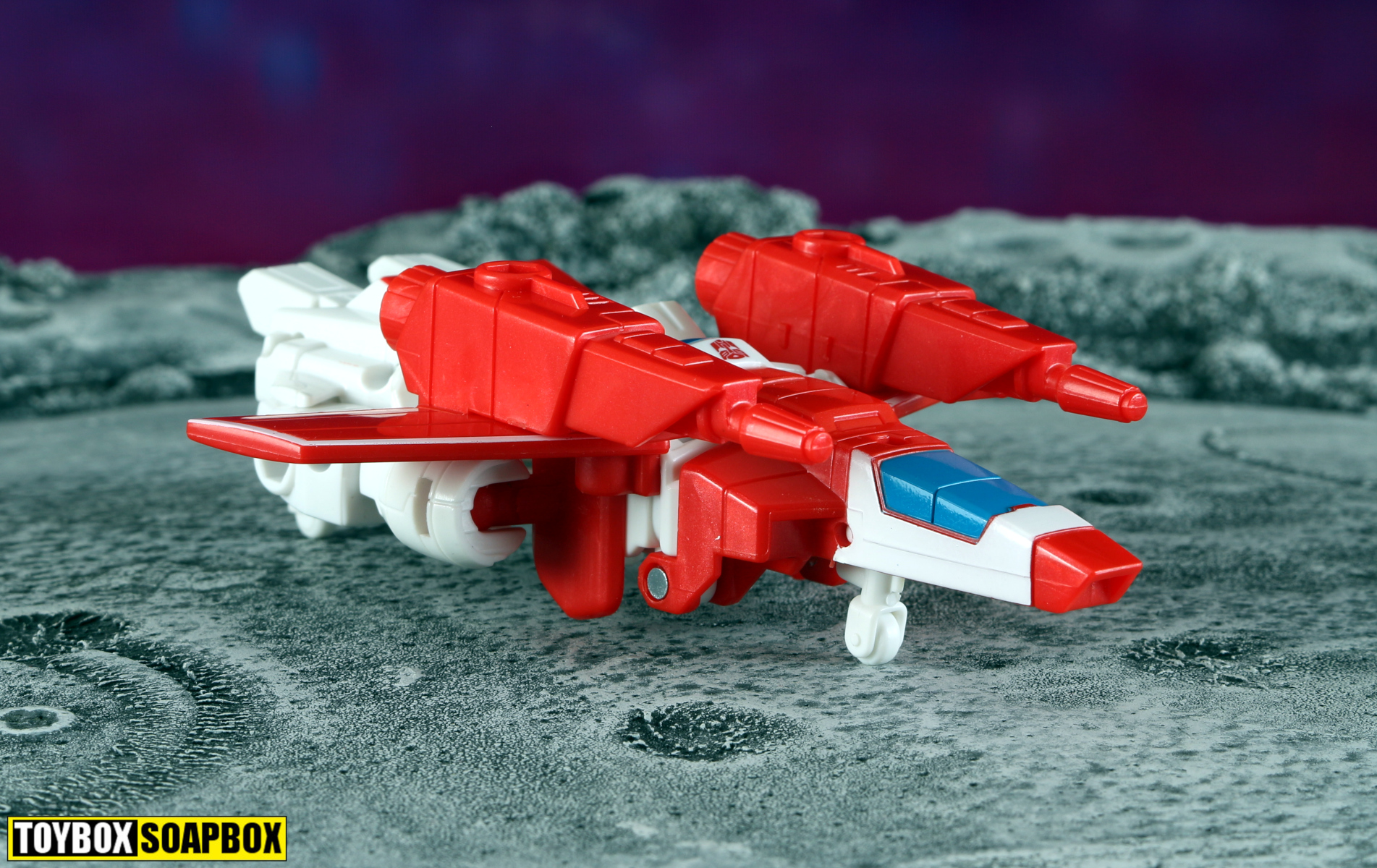 Cyberverse Jetfire’s space jet mode resembles a scaled down version of the old Classics voyager toy that I swear is starting to yellow at the back of my shelves. Cues are lifted from the animation model with the squared off, angled nose and blue canopy the most obvious links to the past, whilst the boosters/guns molded onto the wings are fairly direct copies of the Classics incarnation. Though lacking the spring-loaded gimmickry that could take your eye out if for some reason you were looking at them reaaaaaally close up. 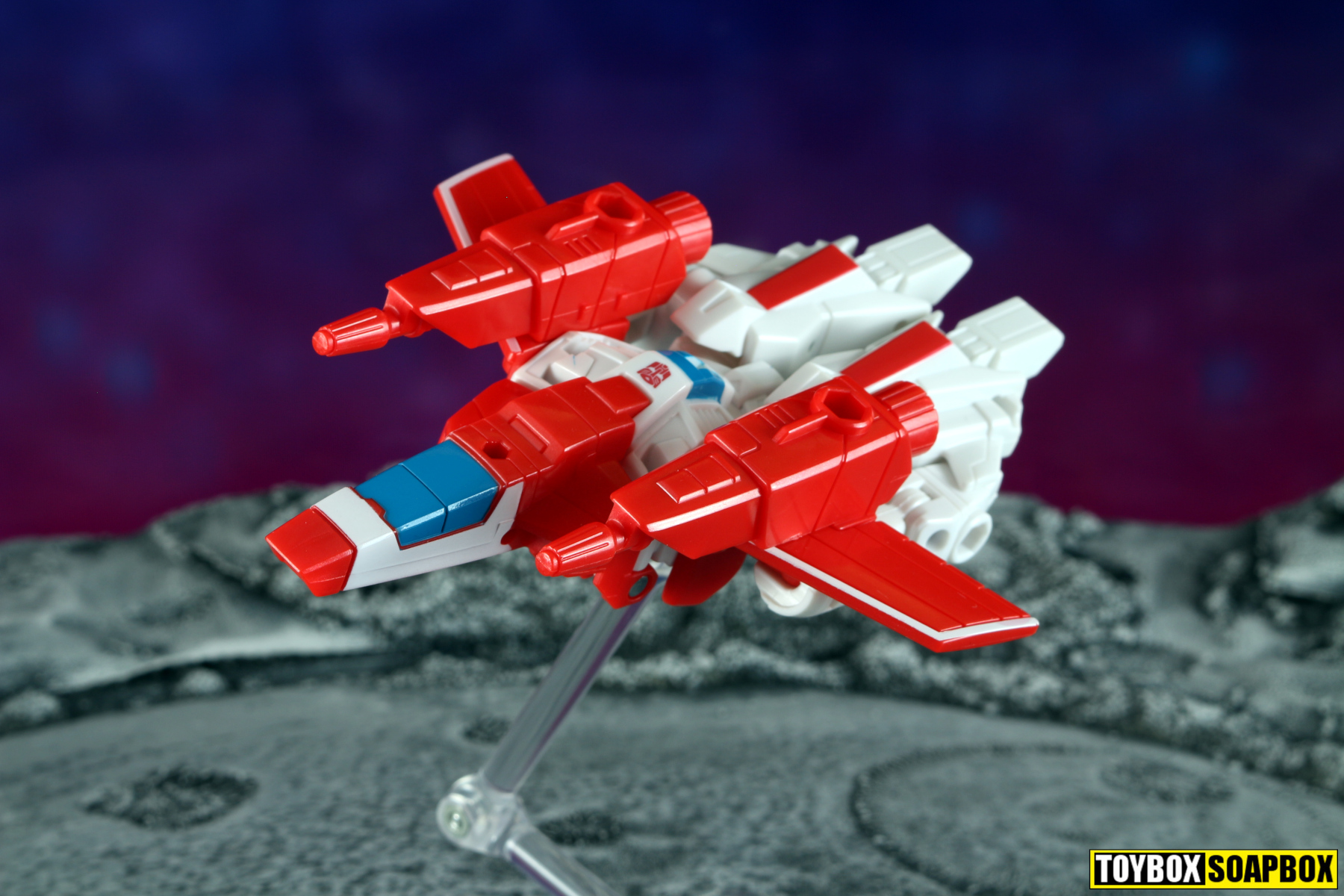 He may be mostly just a compressed robot with wings sticking out from the sides, but at this size were you expecting much more? The only mark against it is the rear landing gear are permanently molded into place, meaning from the side he looks like he’s taking a really stiff dive off a diving board at your local swimming pool.Being this small makes Cyberverse Jetfire great fodder for my desk at work, I don’t need peak engineering or ultra detailing – he just needs to be swooshable to “Holding Out for a Hero” by Bonnie Tyler. That is my benchmark for these sorts of things. 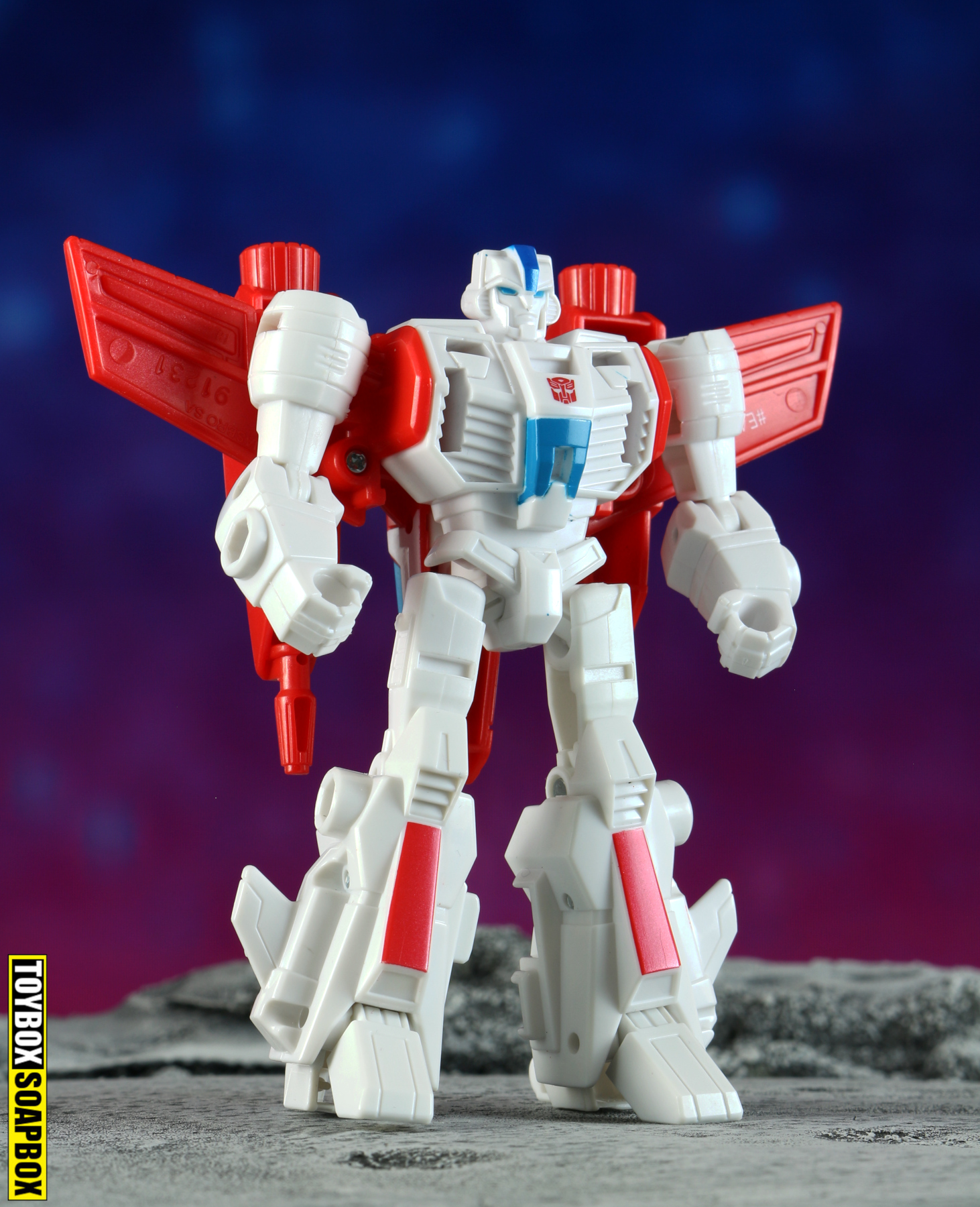 Unpeg some bits, extend the legs and you’ve transformed Cyberverse Jetfire in less time than it takes to open a tin of Teenage Mutant Hero Turtles spaghetti. We aren’t dealing with a collector product, simplicity is the driving force with the focus being on it as a toy to be played with – rather than the holy grail for adults with money burning a hole in their pocket. Perfect fodder for my work desk where I can pick it up and transform it back and forth repeatedly whilst getting angry about some email or other. A stressbot.

Wait – can I patent that? 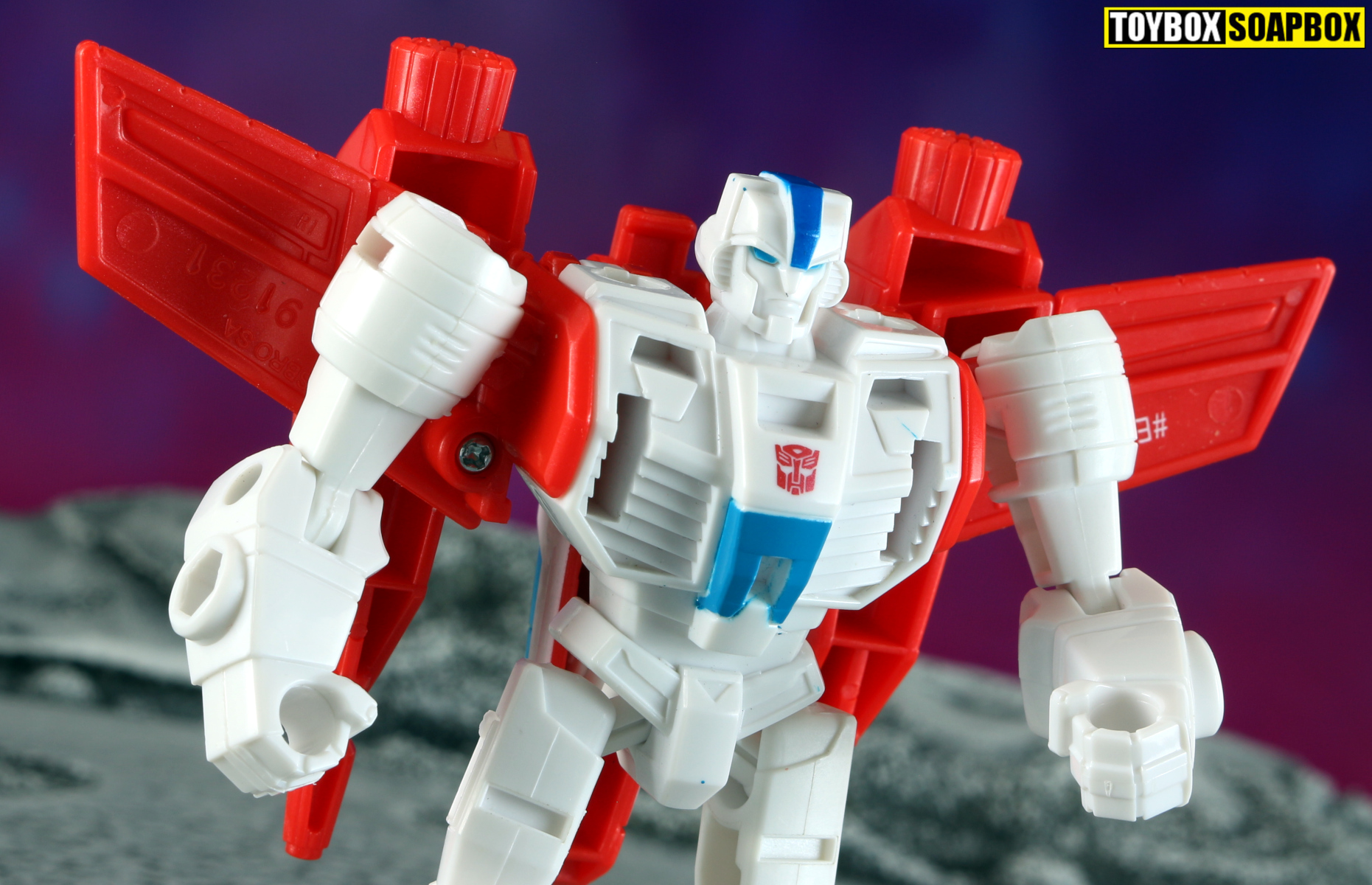 Judging from the box art, there are a lot of details (the wings, for example, are red plastic rather than white with red trim as seen in the card art) that didn’t make the jump from the character model to the toy, but for such a small, simplified figure it still packs a fair amount in. All he really needs are his signature details and they are all present and correct from the blue canopy on the chest, to the perturbed scientist face that has the same look I do when I my girlfriend asks if she can nick one of my packets of Mini Cheddars – whilst she’s already halfway through one. 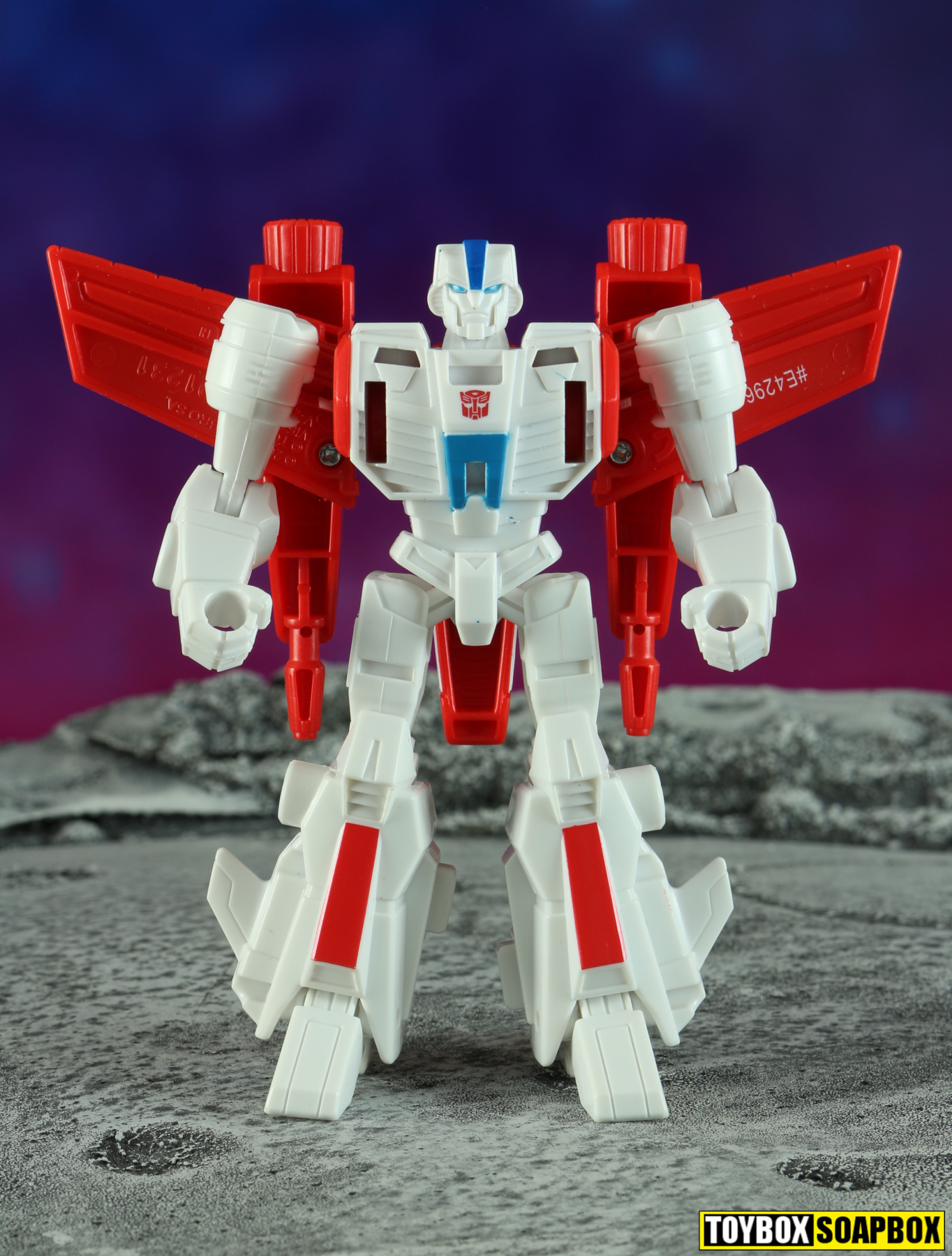 Normally it would be easy to be critical of this toys articulation, but it’s not a collector targeted product. It is a kids toy. For kids. Sure, his head doesn’t turn but that hasn’t made it any less fun or stopped me repeatedly picking it up and transforming it. He has ball jointed shoulders and hips, elbow and knee bends so he’s not a brick and it’s far better than the majority of G1 toys that I worshipped like that mad, heart stealing bloke from Indiana Jones 2. 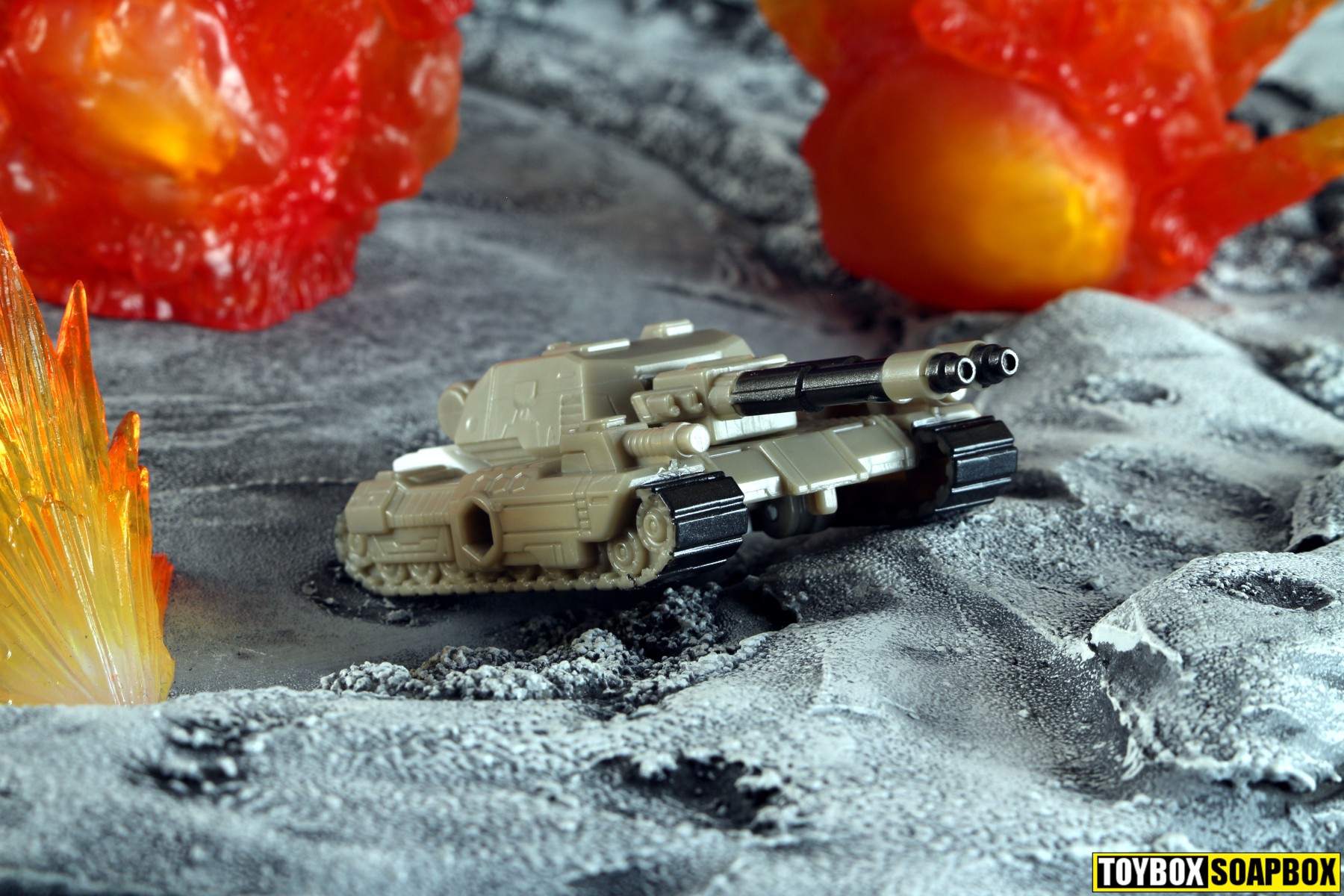 But wait – there’s more! To facilitate the “Power of the Spark” gimmick, you will also find that stuffed into the package is a miniature tank. It’s not based on a particular character and it doesn’t have any features in this mode, its sole purpose is to buff Jetfire up with extra armour pieces. Yup, it’s whole existence is to be worn like a really heavy coat. 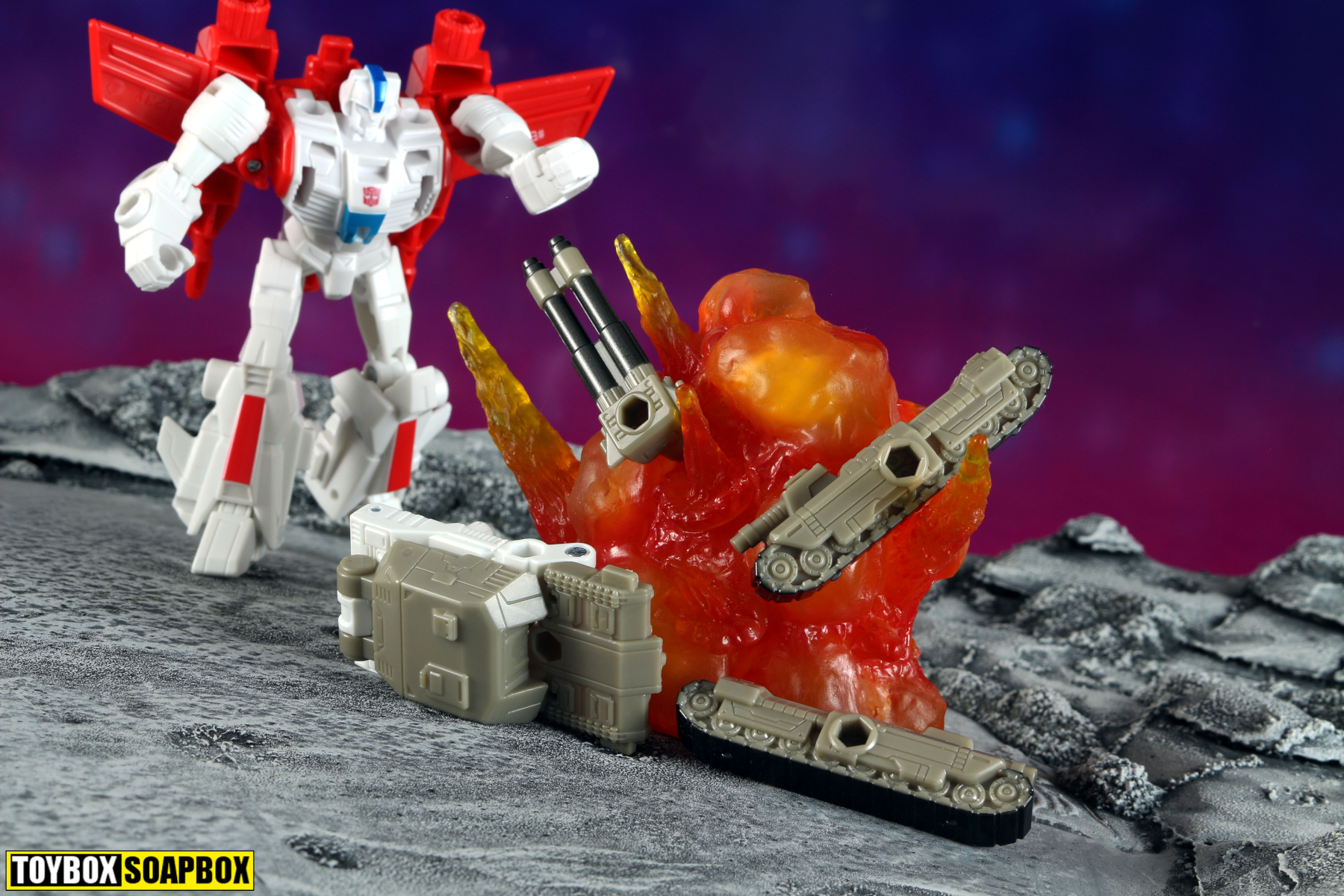 Pull the tank to bits, then peg the remains on to Jetfire – that’s about it for how it combines. Only the core of the tank has a specific location, with Jetfire wearing it as a waterproof poncho he’s bought at a theme park in a vain attempt to not get a soaking on the log flume. Hidden within the lid, which flips back with all the panache of the lid of awheelie bin, is his own personal Halloween mask because Jetfire gotta have a helmet.

It’s not the usual approach to armouring up Jetfire and I couldn’t get that scene of Captain Freedom in The Running Man out of my head. 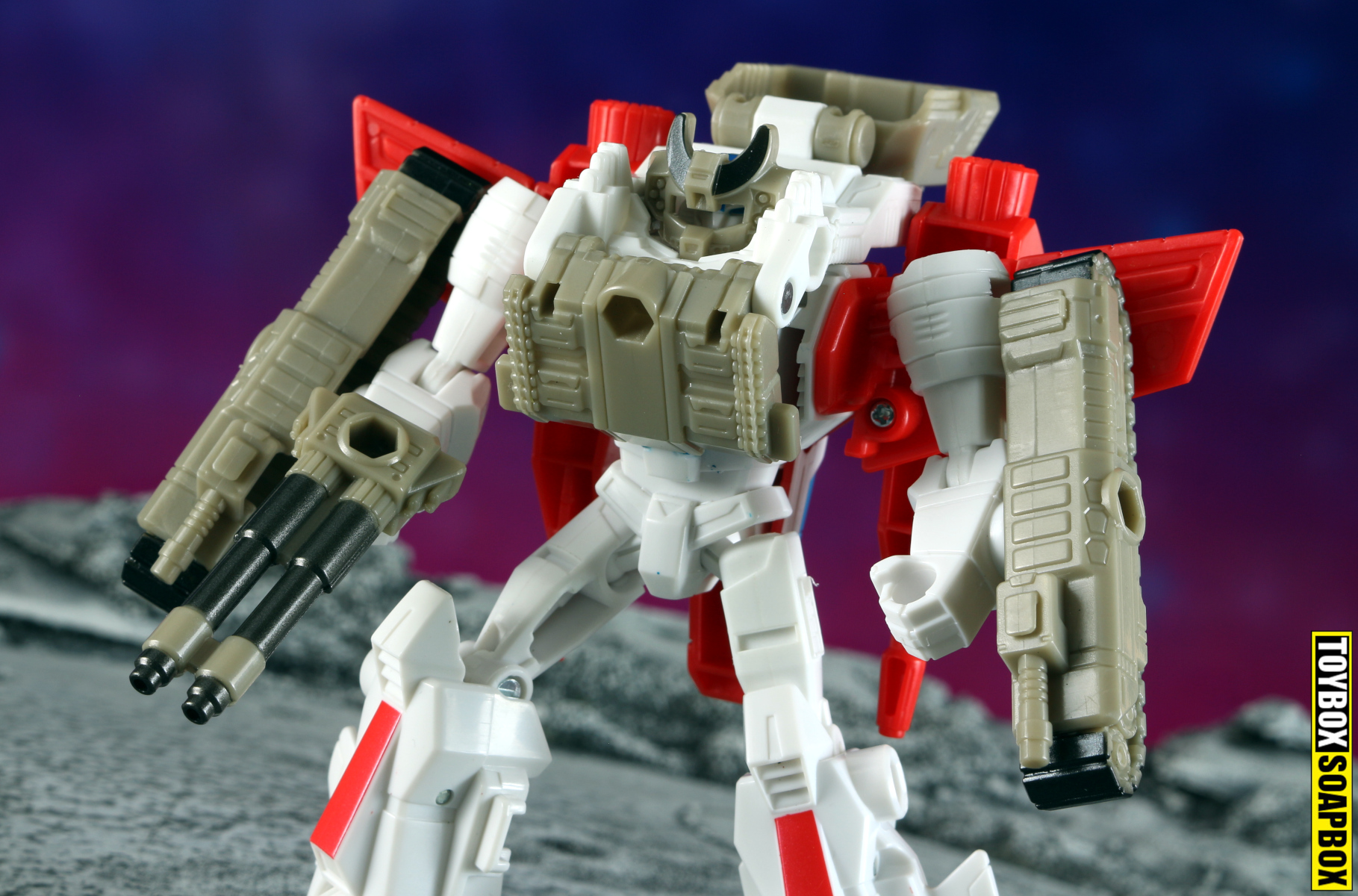 There are none of the bells and whistles you get with collector stuff but then that’s not what this figure is aiming for, and nor is it what I was looking for. Cyberverse Jetfire is trying to be a fun toy, riffing on nostalgia to peddle an old character to a new generation of fans. That doesn’t mean it completely escapes criticism, at £15.99 it’s 50% more expensive than a Legends class figure, and only just shy of a Deluxe. Both of which pack superior…well…everything. The armour parts don’t seem to make up for that disparity in size/cost/articulation which might make parents roll their eyes. At discount pricing the line will be much more appealing for people more interested in this line and who don’t have a sickness for Jetfire toys. For me it scratches an itch for a tiny Jetfire to live on my desk and replace the stress ball that has been demanding a retirement plan for ages.