Growing up I was obsessed with fighter jets and spacey versions of fighter jets. We had this old washing basket that I used to turn on it’s side, arrange a variety of cushions my mum was furious had been removed from the sofa, and clutching my NES Advantage stick as a make shift throttle – pretend I was a fighter pilot. F-15’s, Space Shuttles, X-Wing fighters, that dropship from Aliens, Robotech’s Valkyrie – my imagination flew them all. As a young, inner city kid, there was something appealing about being able to zoom away, through the sky to anywhere but a tower block in the middle of Nottingham. Mike Tyson had pigeons – I had toy robots that turned into planes.

So it stands to reason that as a toy collector I can’t resist the king dingaling of robots that moonlight as jets – Starscream. I already own dozens of  toys bearing his handsome face, but one I completely skipped was Energon Starscream. At least until last week when I happened upon one, in G1 colours, going cheap on eBay. So here we are. 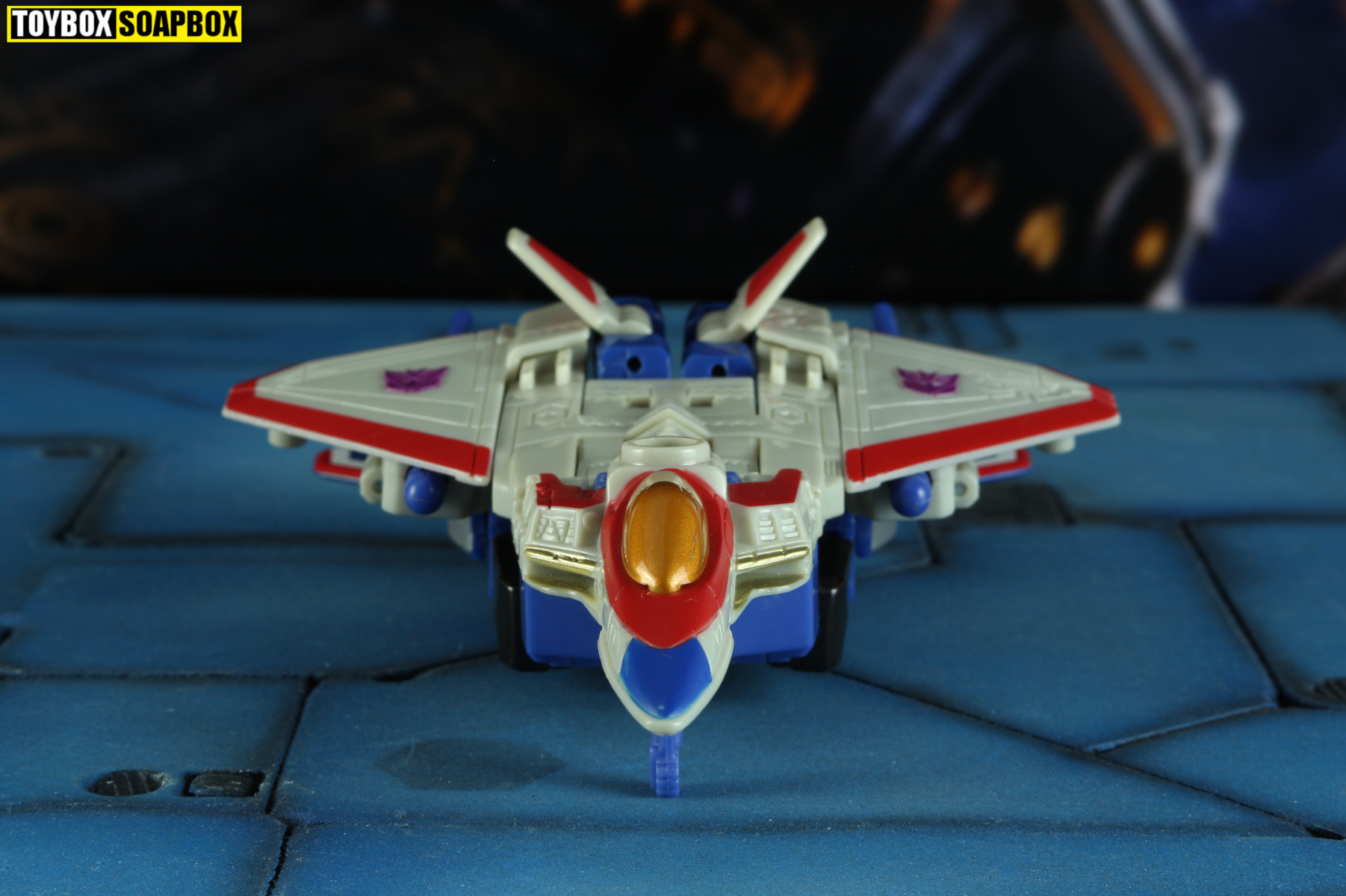 When the Unicron Trilogy kicked off in 2000 and whatever it was, I wasn’t overly keen. Armada may have been the fresh face the brand needed to put it back into the mainstream for a new generation of kids to discover, but coming hot on the heels of the brilliant Robots in Disguise cartoon and toyline it felt like a huge disappointment to me (except for Jetfire!). At that same point in time 80’s nostalgia was really beginning to take off, as those of us who were lucky enough to be kids in the neon decade suddenly found ourselves as newly minted adults with cash on the hip. Ignoring Armada, Energon, Cybertron, Shangri La and any of the other mainline Transformers franchises was easy because my nostalgia fancy was already being tickled elsewhere. Notwithstanding, certain toys still managed to catch my eye including this one. Because Starscream being upgraded into a lovely, modern F-22 Raptor made all the sense in the world – and it just looked bloody cool. 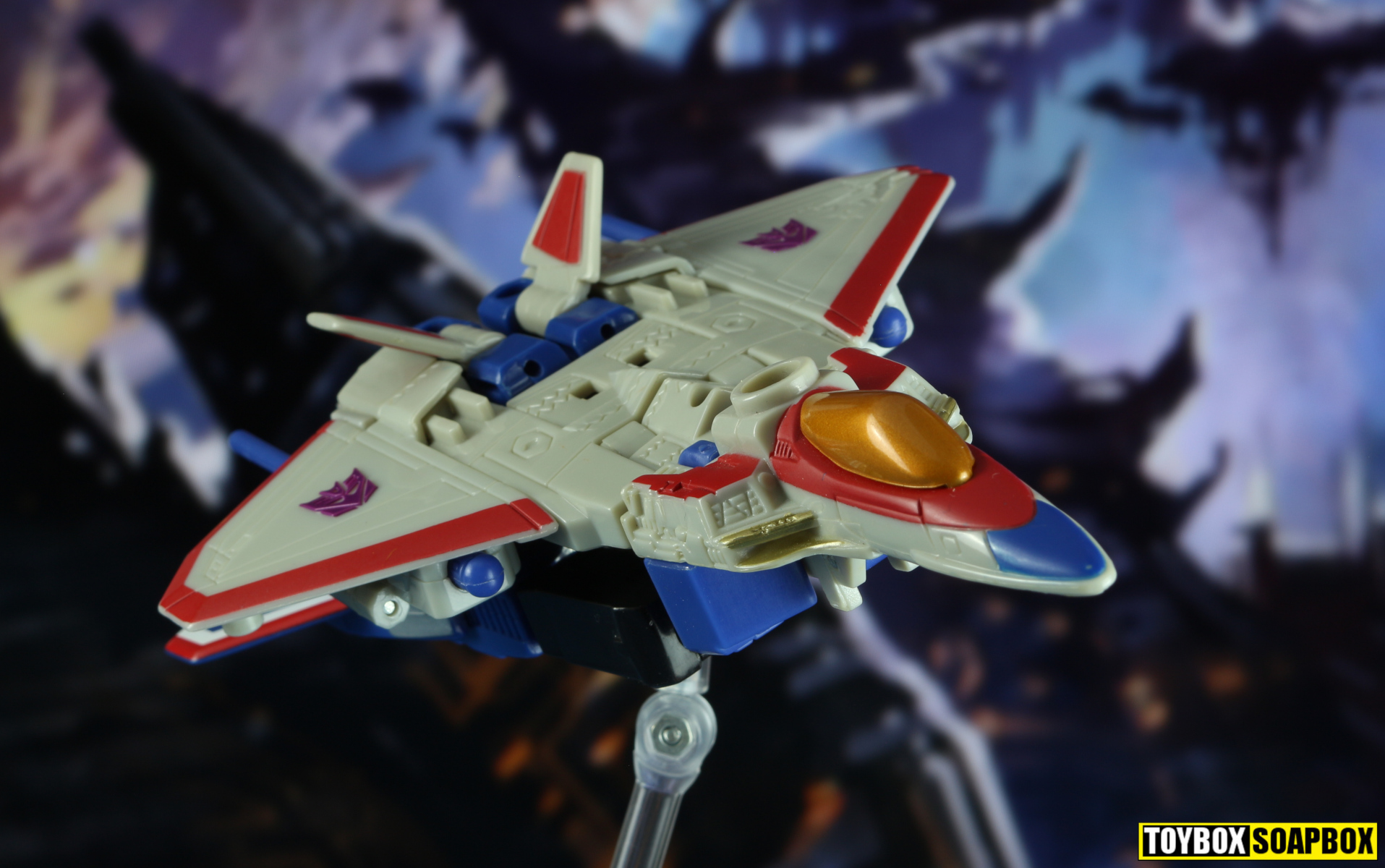 Being a G1 fan doesn’t mean I don’t like to see old characters given a makeover. Fresh takes on old favourites are what keep the brand alive and invigorate it with new energy. But I am a G1 fan, so if you can add a little G1 sprinkle then it’s an easier sell and that’s obviously how we ended up here all these years later. The beautiful deco adds the right finishing touches that the toy needed to capture my interest and just look at that lovely gold canopy. I was half expecting it to have a gimmick where you plug a minicon in and the Going for Gold theme tune starts playing.

I’d have gladly handed over my entire Tazo collection to see this toy get the Skywarp and Thundercracker treatment. Just imagine it with a pair of New Rock boots in pure goth black and purple. Yeesh. 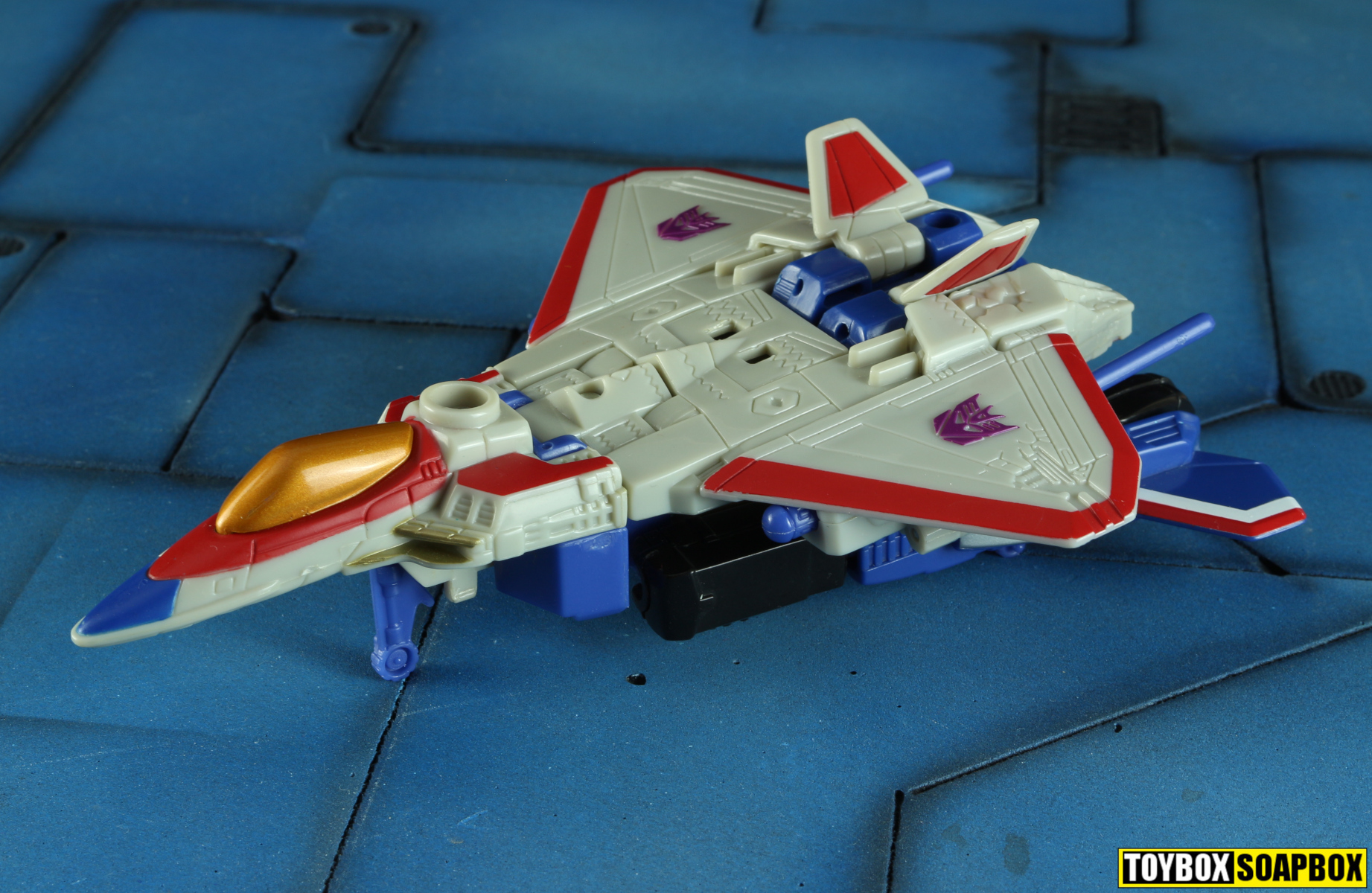 Under each wing hangs what I assume is a minicon port.Slapping tiny robots onto larger robots, like that kid who made the mistake of wearing a Global Hypercolour t-shirt to school, is a Unicron Trilogy hallmark if ever I saw one. Nestled in next to them are a pair of spring-loaded missile launchers but in order to fire them you need to flip the wings over to reveal the buttons. It’s a convoluted way to go about the standard missile firing gimmick, but if he used it in the cartoon I bet it was preceded by about 15 minutes of him talking about firing them with awkward dubbing anyway. Landing gear is the toys final gimmick, flipping out from underneath, and is a nice little touch not always present on modern toys. 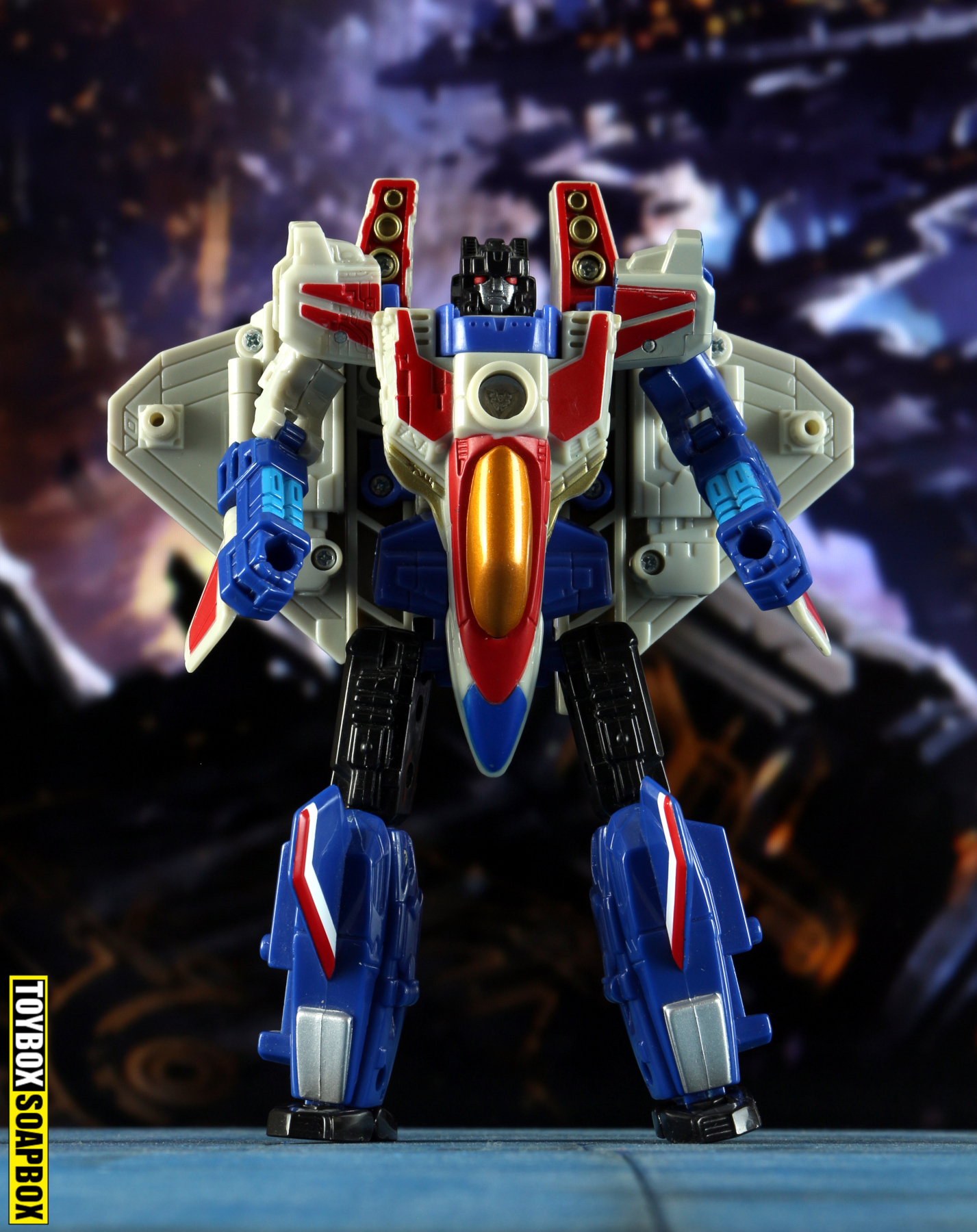 I don’t know what I was expecting but Energon Starscream is surprisingly straightforward to transform. Unfold some stuff, press the arms out, Torvill and Dean spin a couple of bits – and you’ve turned a jet into a robot. Slightly disappointing as I’d done a stretching routine, mentally prepared myself and even put the Rocky theme on – but it was over before Mr Balboa had even made it to the steps. Pushing the arms out was the one awkward element of the process. I HATE Transformers where you have to bend plastic, especially when the hinges are as thin as they are here. This toy still being in one piece all these years later suggests it’s far more durable than I think it is, but it’s yet to meet me after a litre of rum has been poured down my throat. 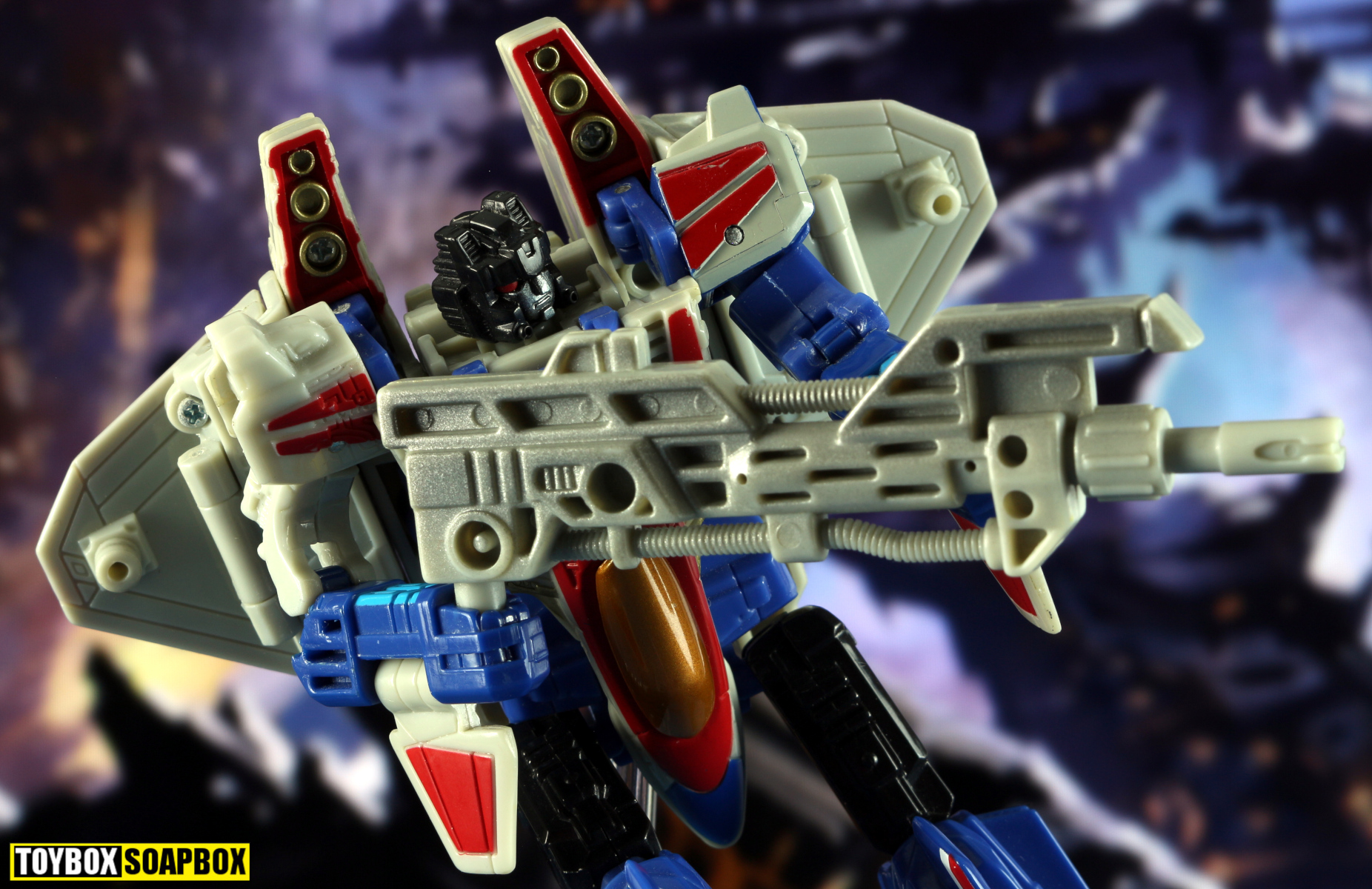 With this deco particularly, this figure captures all of the familiar Starscream traits but in a fresh way that’s a welcome break from the usual template. Small things like having the Decepticon badge in the centre of the chest make for a fresh visual change. Wearing jet fins under each wrist is a mild annoyance, and don’t get me started on the one blue arm  – but I can let it slide when everything else is so pretty. Just imagine if the live action movie Starscream looked like this, rather than a smashed up Dorito that had been leg dropped by Hulk Hogan before being eaten and then vomited back up by a Racoon. This is not meant to be G1 but it’s still familiar and retains the hallmarks that sell the character without sacrificing them for the sake of being able to say it used every single part of the real vehicle. Celebrating being Starscream does far more for me than directors looking down their nose and deciding it’s not real enough. 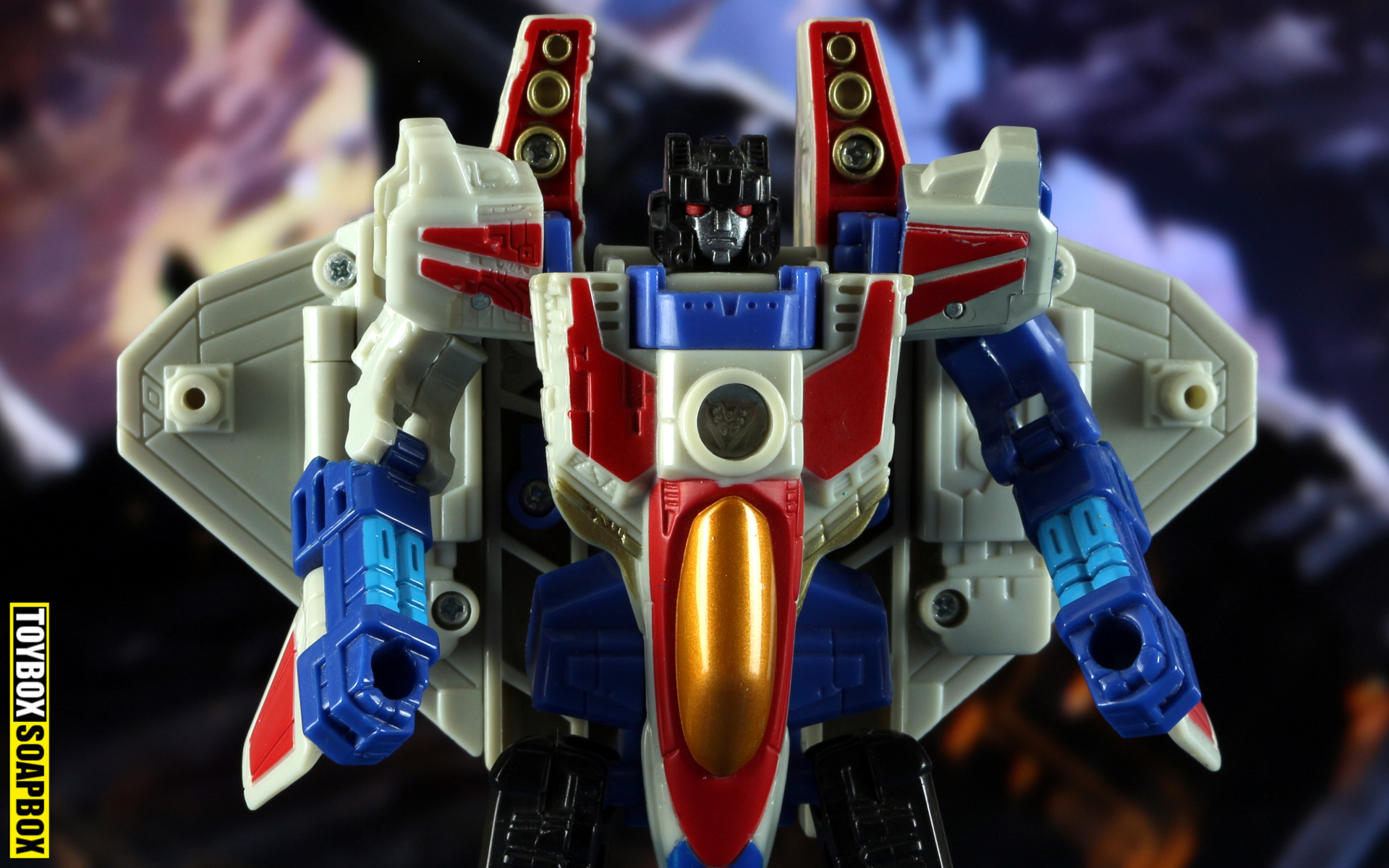 Articulation is nothing to write home about but by no means terrible. Chuck in an ankle tilt for his tiny sock feet, sort the arms out, ball joint the head, maybe add a waist swivel and you could have a Generations toy easy peasy. My only gripe is that his arm joints are scary tight to the point I’ve considered signing him up for BUPA. You can still pivot the rocket launchers, should you wish to, or he can wield the rockets as baseball bats or twirling batons (note: not officially sanctioned). Also included is a gun that looks like the wildest Super Soaker you’ve ever come across and combines with an equally ginormous sword. Because I bought this from eBay it didn’t come with the sword, even though the listing specifically said “COMPLETE”.

No Final Fantasy buster sword homages from me I am afraid...*hums Aerith’s theme*…. 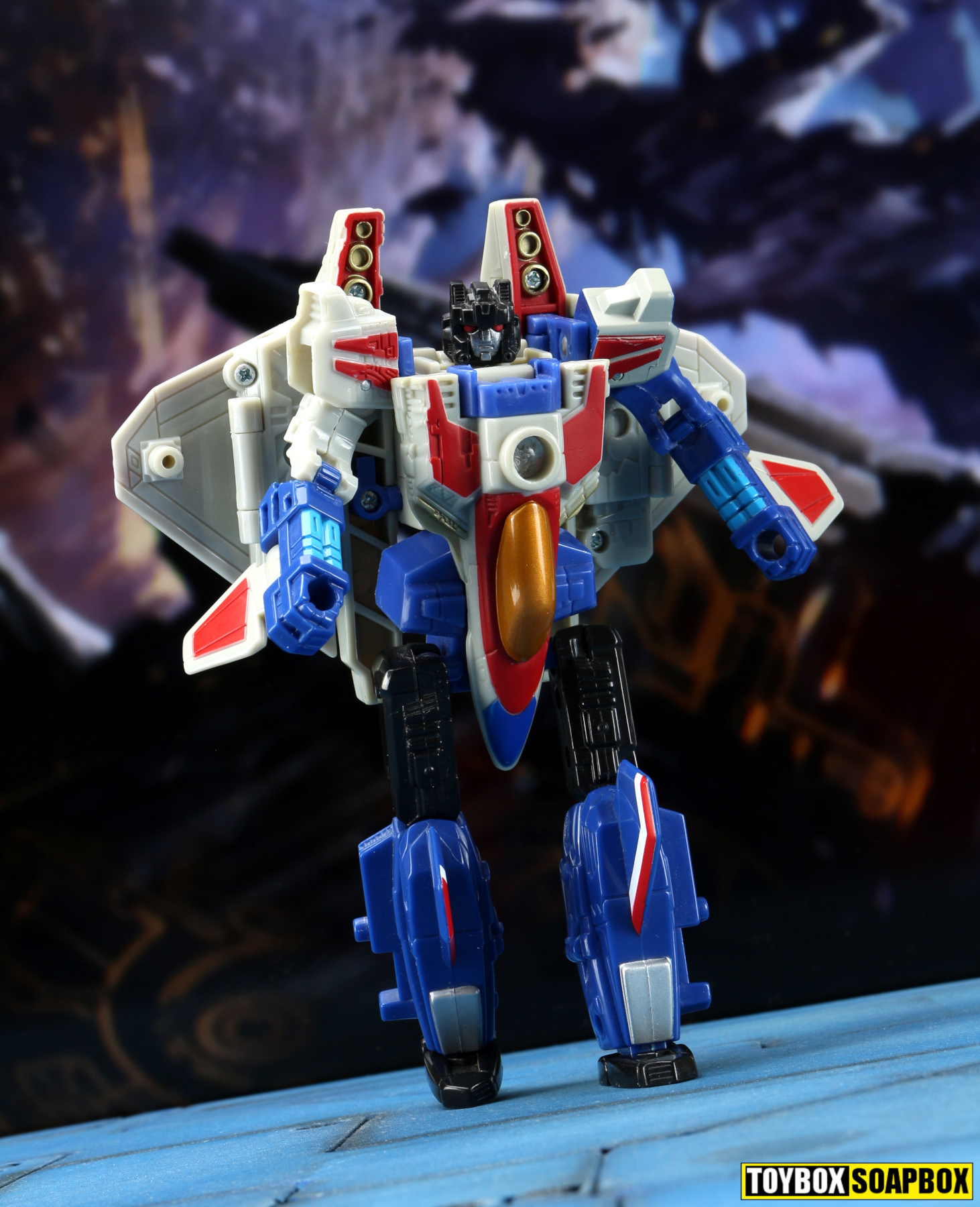 For over a decade this toy has sat somewhere in-between War Within Optimus Prime and a vintage Razor Ramon toy in my eBay search list for toys I’ve always wanted but not enough to actually buy. Having finally bought it there’s a slight feeling of “why did I wait so long” juxtaposed against “meh, you’ll only flog it on Twitter in a few weeks”. If this toy was released now, with those visible screws behind the head, we’d have a crisis on our hands and people needing the phone number for The Samaritans. From that point of view it’s been lovely to look at a toy and remember what it was like to just enjoy it for what it is, with nobody yelling at me about “the flaws”. For the tenner or whatever it cost me, it’s been well worth it if only to keep watching the old Going for Gold intro on YouTube.