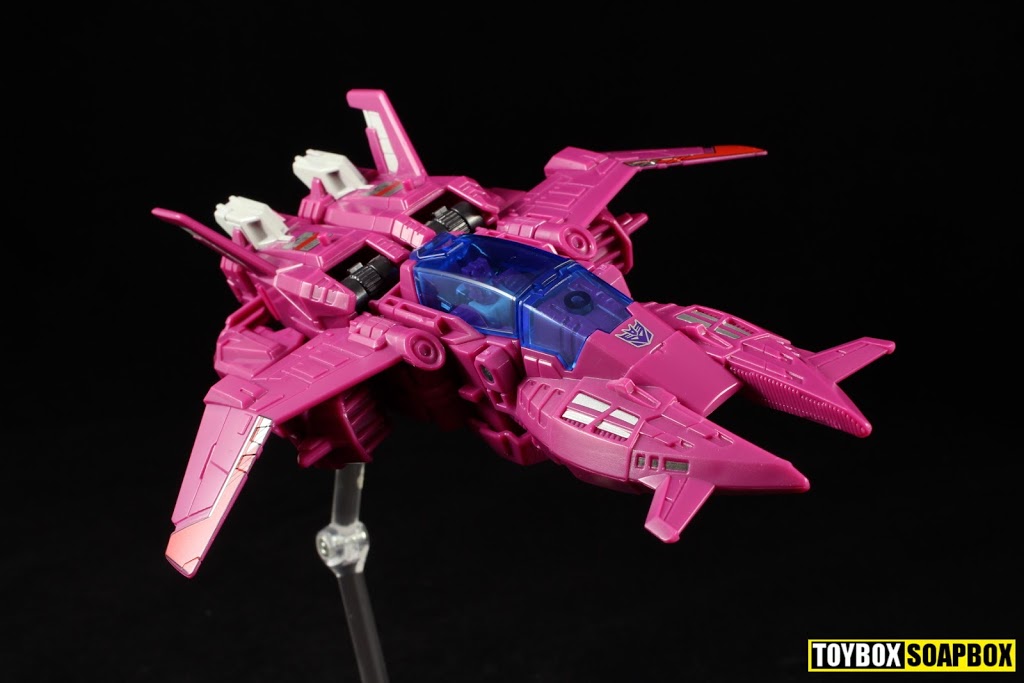 Misfire hails from the late 80’s era of Transformers when the franchise took a sharp turn into super futuristic sci-fi. Not that Aliens style military sci-fi that touched all our hearts with it’s Pulse Rifles, quotable lines and sweet ass Reebok’s, but way more imaginative stuff that could have been mistaken for a video game shoot-em-up.

But is it as awesome as it looks? Has Titans Return hit a new peak? 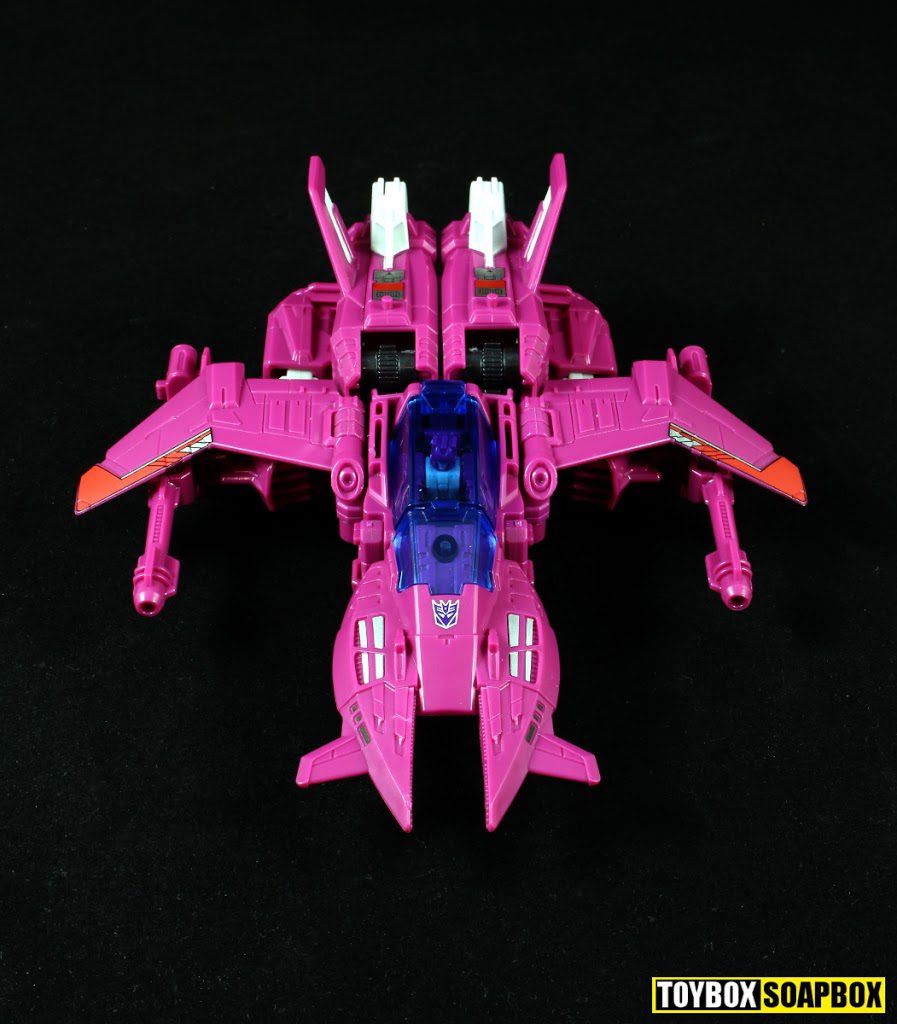 Of the three (new) Decepticon target master jets Misfire wears the weirdest weirdo hat. Slugslinger is pretty esoteric individual with his two cockpits, which is pretty high on the Gazza scale of mentalness, but they are two cockpits that look familiar.  Triggerhappy, well he looks like a flying shiv with guns on the side, but Misfire looks for all the world like something you would pilot in R-Type.

But with the sort of burning hot pink wink that would get Pop’N’TwinBee hot under the collar. If they had collars. 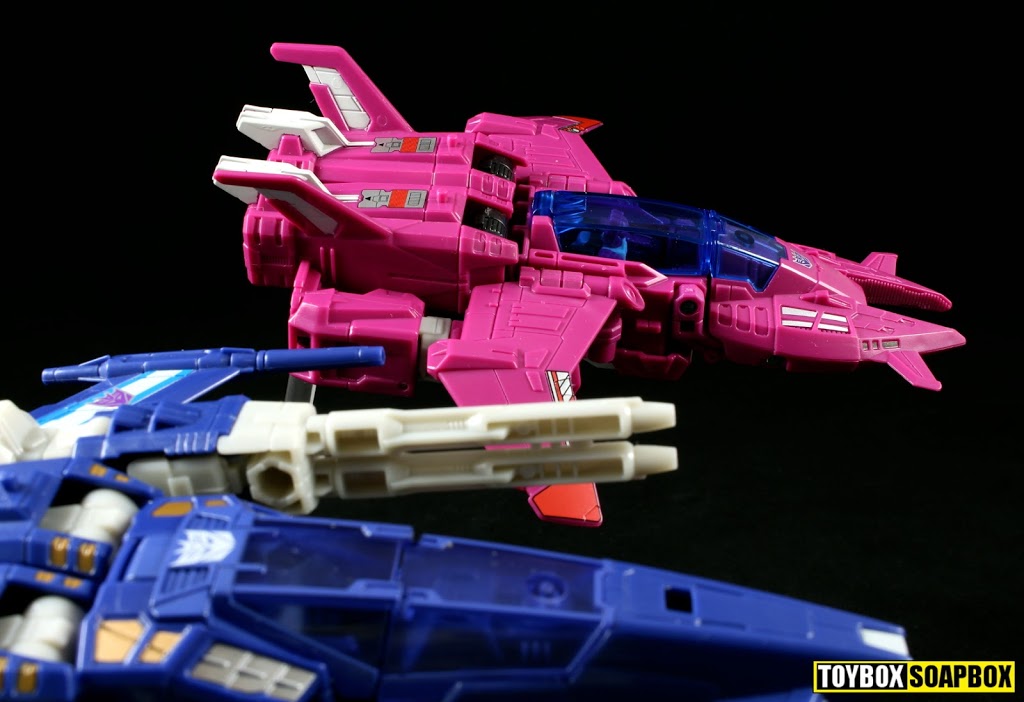 “You want me to gut Ultra Magnus…wait…that’s not my line!”

We’re talking flashy, dynamic, screaming pace and power as detail sweeps backwards over the craft like an 80’s hair commerical. Misfires signature stag beetle nose and flapping duck wings have all  warped to 2017 but remain wrapped in a gorgeous explosion of hot pink, spiralling upwards through the stratosphere to the Robotech theme tune. It’s Hasbro at their best, unapologetically committed to recreating G1 for those us too stubborn to move on.

It’s so 80’s in fact that I swear when I opened the package it started playing Pat Benatar. (Invincible, if you’re wondering). 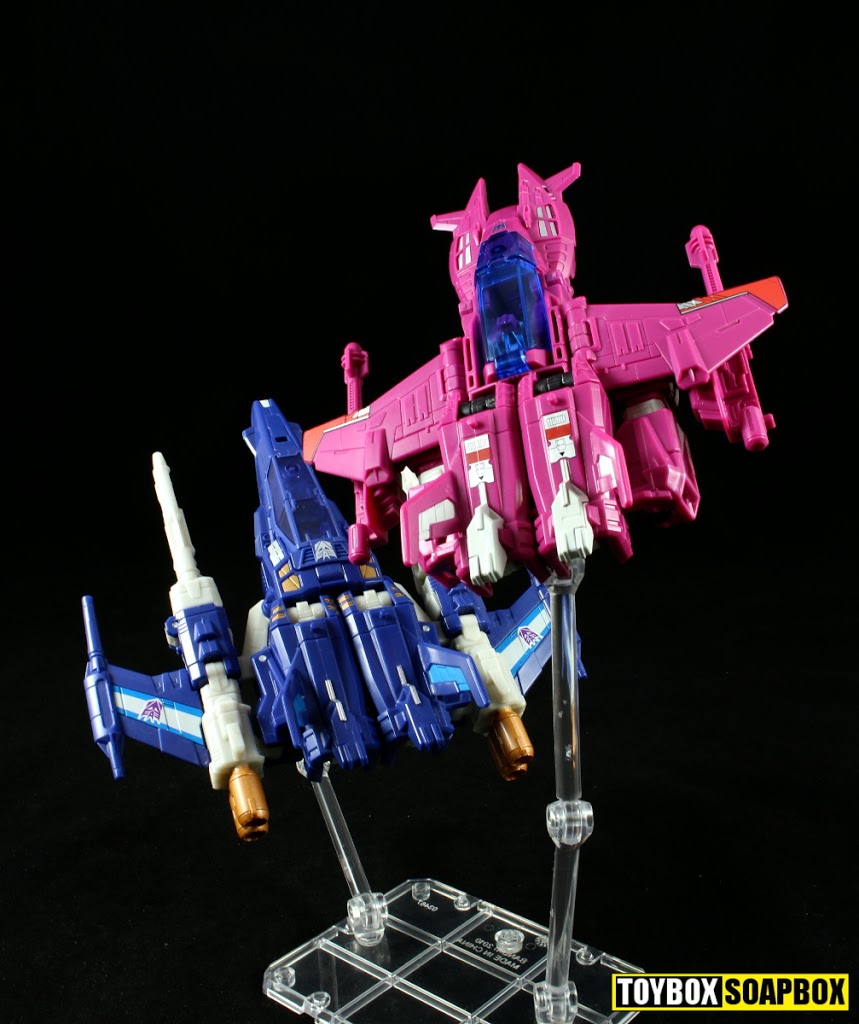 Hasbro have taken many of the details from the original and transplanted them onto a Titans Return body. Triggerhappy’s body in fact. Misfire comes to us in the form of a very heavy retool of Triggerhappy, but beyond the rear of the craft there’s little recognisable between the two. Misfire is his own deal and even those folded up legs on the rear are  more Misfire than Slugslinger and fully in keeping with the G1 toy. Slugslinger is also a forthecoming retool of Triggerhappy but looks very different again, yet retains the DNA that the binds the three (new) 1987 Decepticon jet Target master’s.

Somebody obviously thought this through. 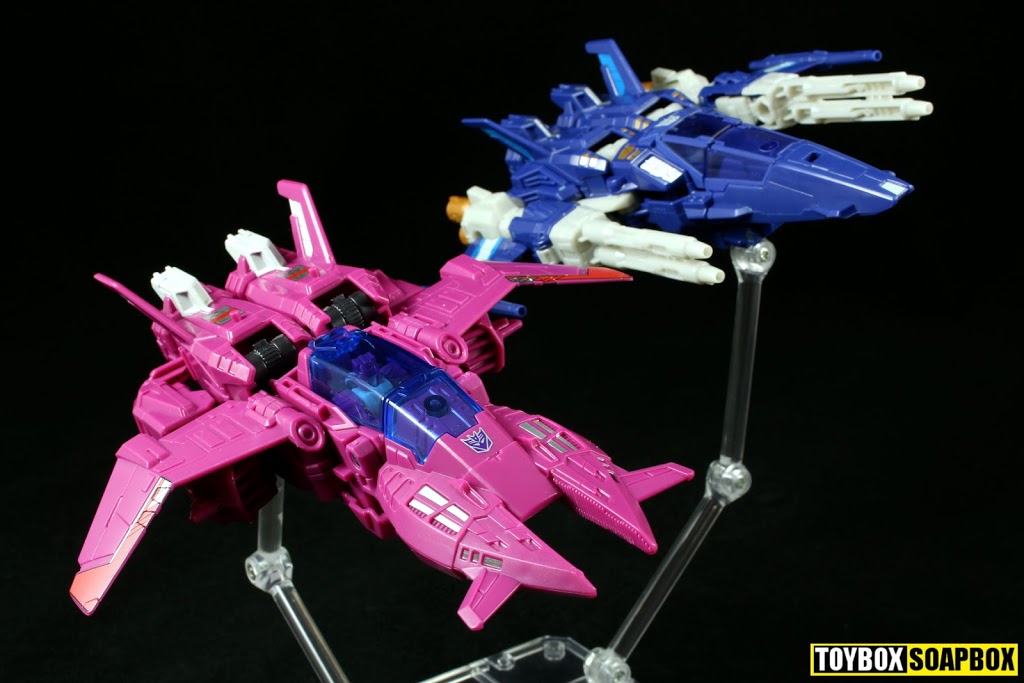 Aside from being a gorgeous example of 80’s Babycham joie de vivre, the Hasbro elves made sure to conjure a Misfire who was sturdy and holds together. Aside from the arms unplugging from time to time, but that’s a minor inconvenience I can forgive when the wings have a hinge that allows you to make Misfire do a flapping motion. As all year round Christmas Carollers, Clannad, once sang in that weird monks taking in breath way – “The art of compromise has surely been our greatest strength”

Blame my mum – she went through a Clannad phase. I just soaked it up like a musical sponge whilst demanding she put on Walk Like an Egyptian. 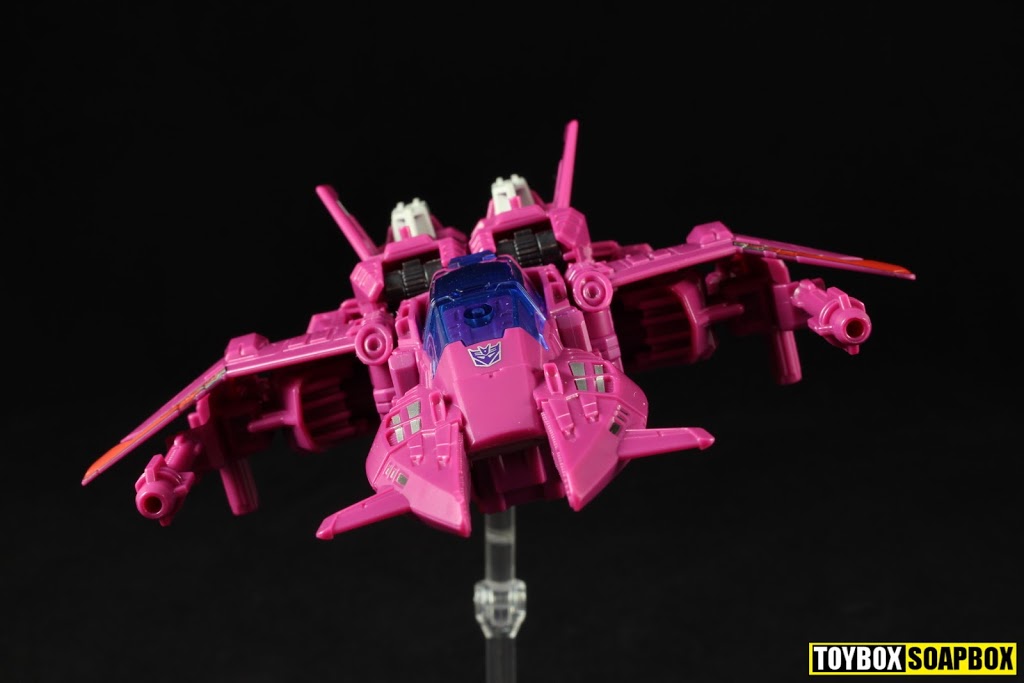 Misfire is a stunningly beautiful jet that perfectly nails the original character. Everything you’d want as a Geewunner is here, yet it feels totally fresh and different enough to not be outdated. Even if you don’t like G1 it’s tough to not fall in love with this totally bonkers jet mode.

The Macross Valkyrie will always be the stock go to as a beautiful example of jets that made G1. If Jetfire is the Kelly Kapowski of vintage Transformers, then Misfire is totally Jessie Spano. 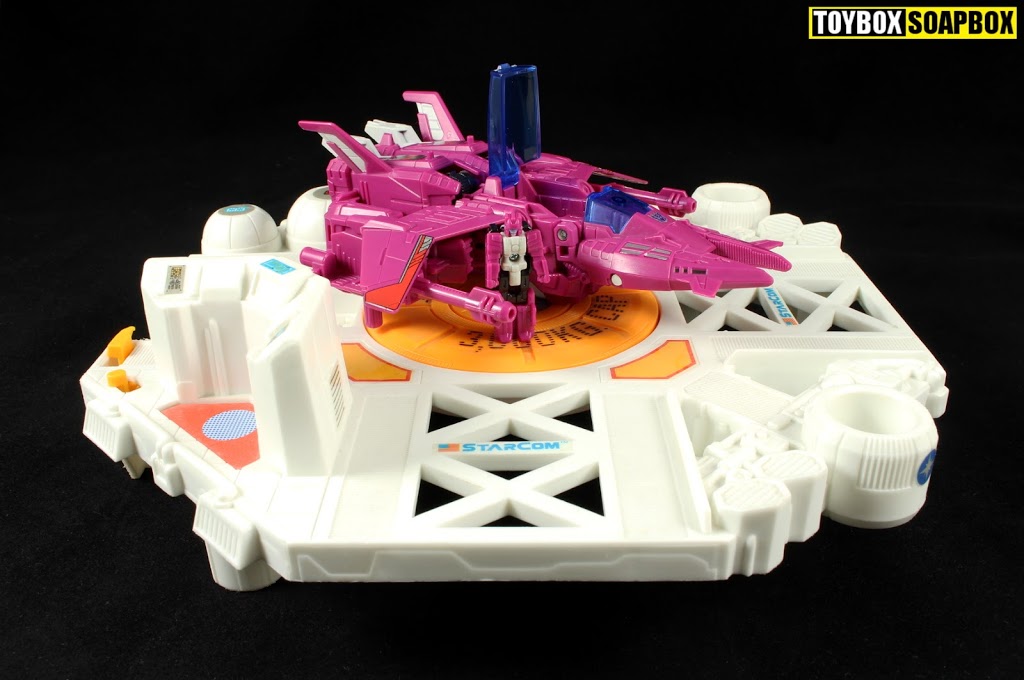 Of course there is also Titan Master compatibility to discuss and there are pegs on the legs the wee fellas can stand on if they wish to attempt some form of Seagal style plane boarding move…but anyone who has seen Executive Decision knows that isn’t advised.

The clear blue cockpit opens to allow a Titan Master to sit inside and pilot the craft. 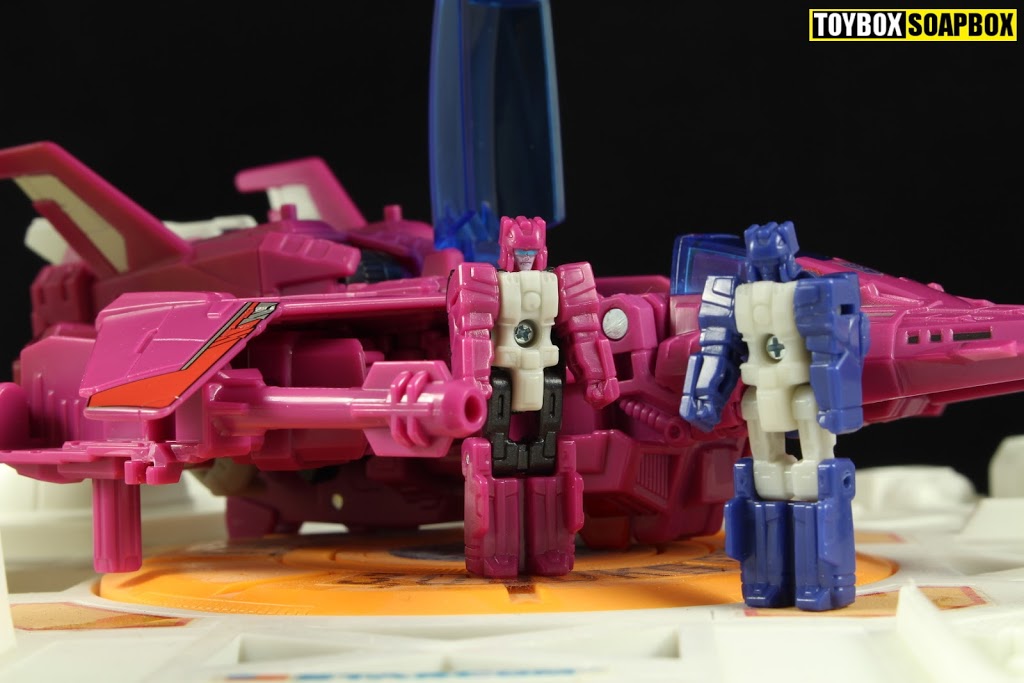 The Titan Master in this case would be Aimless, who has graduated from being a Targetmaster, to  being a Headmaster. You can tell we are reaching the end of this line because the Titan Master bodies  from Hasbro have often suffered from barren paint apps but Aimless has a lighter pink painted face and  blue painted visor to make up for being a straight recolour of Triggerhappy’s head robot. His body is comprised of 3 different colour plastics which gives him a finish that is more like what Takara usually do. Hasbro are spoiling us like we are in a global Ferrero Roche advert. Same articulation as usual which is hinged hips and knees, flappy penguin arms and ball jointed head for neck mode. It’ll do.

If you want Aimless as a Targetmaster, Takara are doing that in their Legends line. So yes bank account, I will be double dipping. 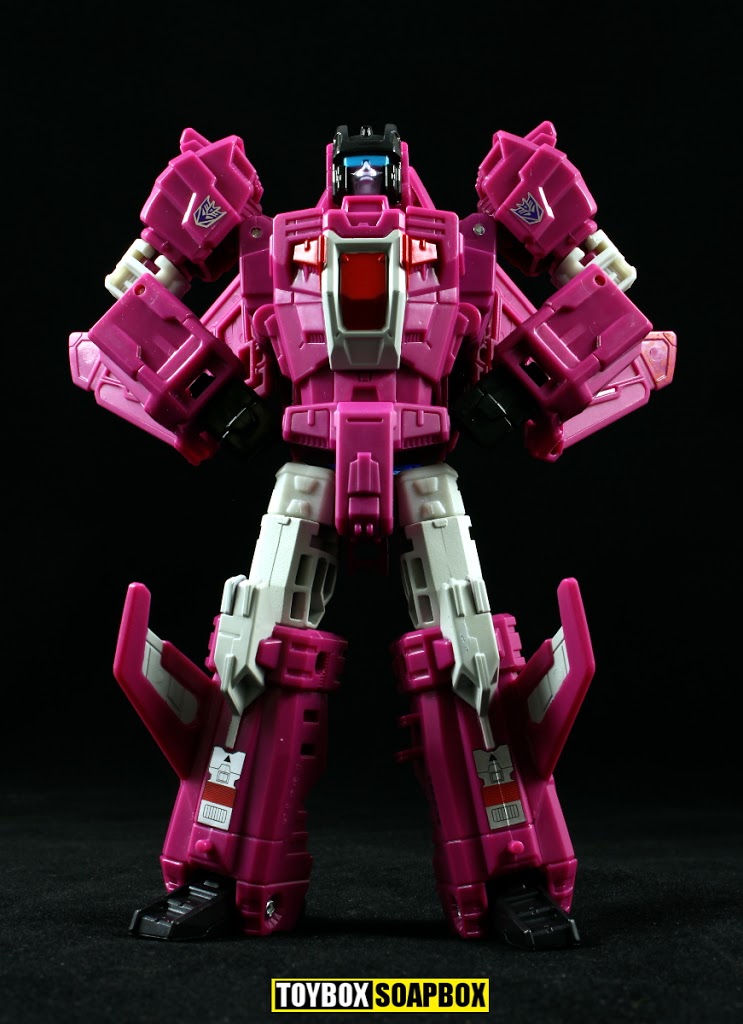 As mentioned earlier, whilst Misfire is a retool of Triggerhappy they share very little in common and that extends to the transformation.

Where Triggerhappy’s body swivels, Misfire’s torso is the other way round so has no need for that and instead opts for a multi hinge cockpit lark that works brilliantly to put it on his back and create that signature G1 Misfire silhouette. The arm hinges are different but work in a similar way to Triggerhappy – only with wings that rotate. 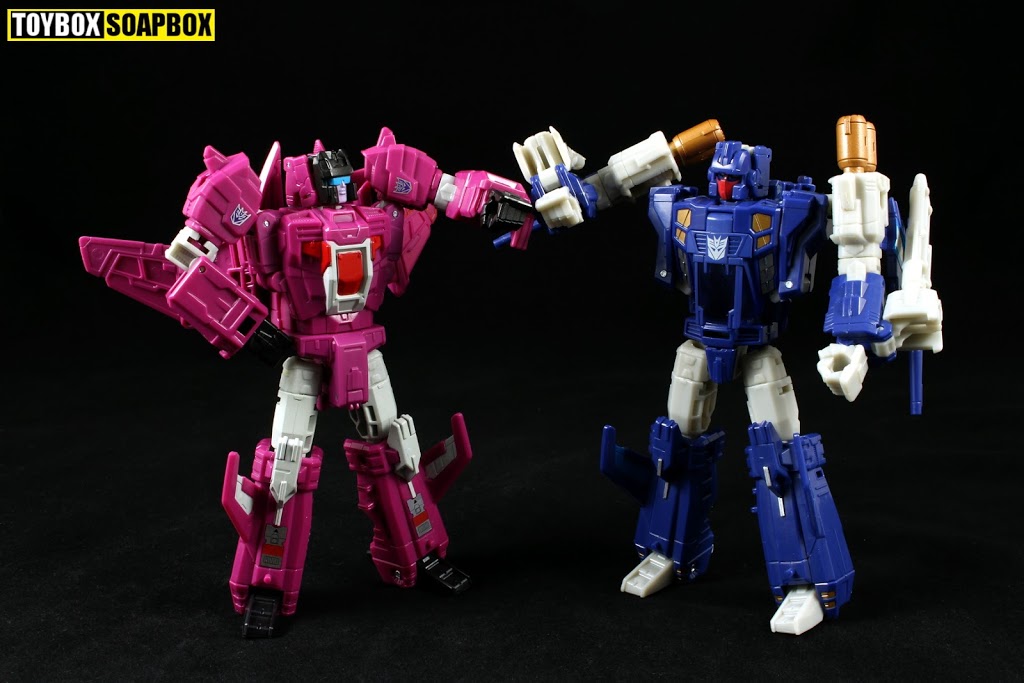 Misfire’s robot form is every bit as pretty as his jet mode. Everything from the waist up is totally different to Triggerhappy – it’s all new parts. Where the jet mode is slavish to Generation One in the most wonderful of ways the robot mode scales back some of the blockiness of the vintage toy and works some curves into the shoulders to reflect the shape of the alt mode.

What grabs your attention most is the colours. A beautiful blend of sweet pink mixed with off white. On the chest Hasbro have opted to whip out the paint brush and add a touch of red and white to the chest that could possibly be intended to evoke the vintage toys sticker detail. Maybe it seems like a strange thing to pick out, but when so much of this toy takes it’s inspiration from the original it’s tough not to rationalise every detail in that same manner.

Cast a glance at Misfire’s shins and you will spot recreations of vintage stickers but they continue this bizarre Hasbro trend of being the wrong way round. Same thing happened on Brainstorms shins. Are Hasbro’s design team trapped in the upside down? 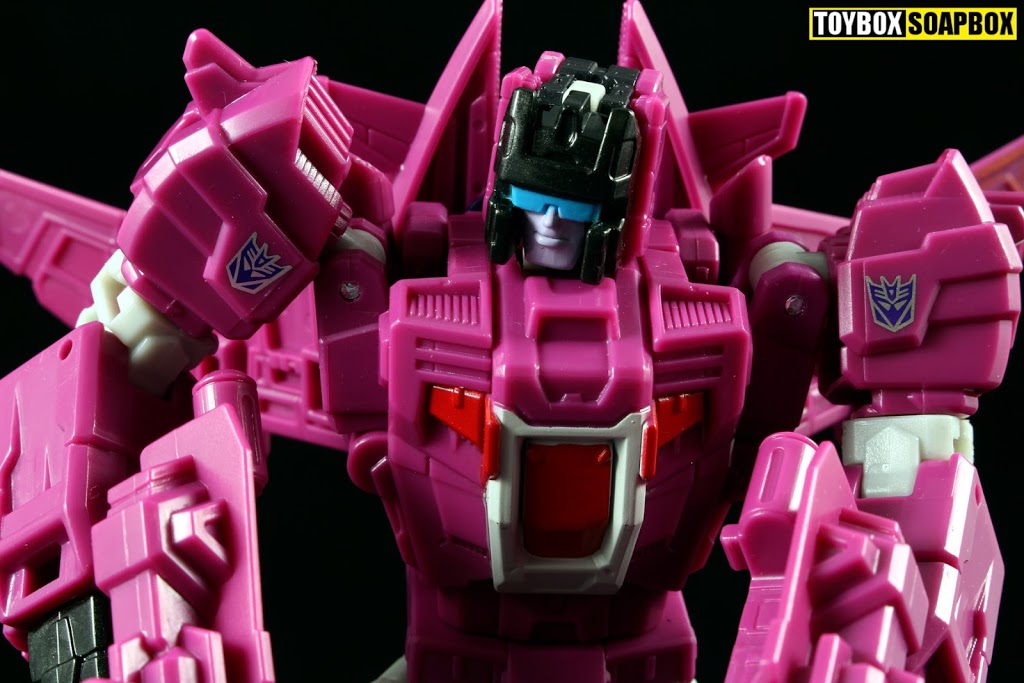 Having a body to die for is one thing, and fortunately Misfire has the handsome face to go on top. Misfires vintage toy had a visorless face, as does his current incarnation in the comics, with a head that looked reminiscent of Sideswipe. The US and Japanese cartoons, as well as the Marvel comics, all depicted him with a a block head and visor in varying colours so I assume that’s where the inspiration for this derives from.

The backpack folds perfectly to sit behind his head and provide the signature folded up bat wings that complete the Misfire silhouette. 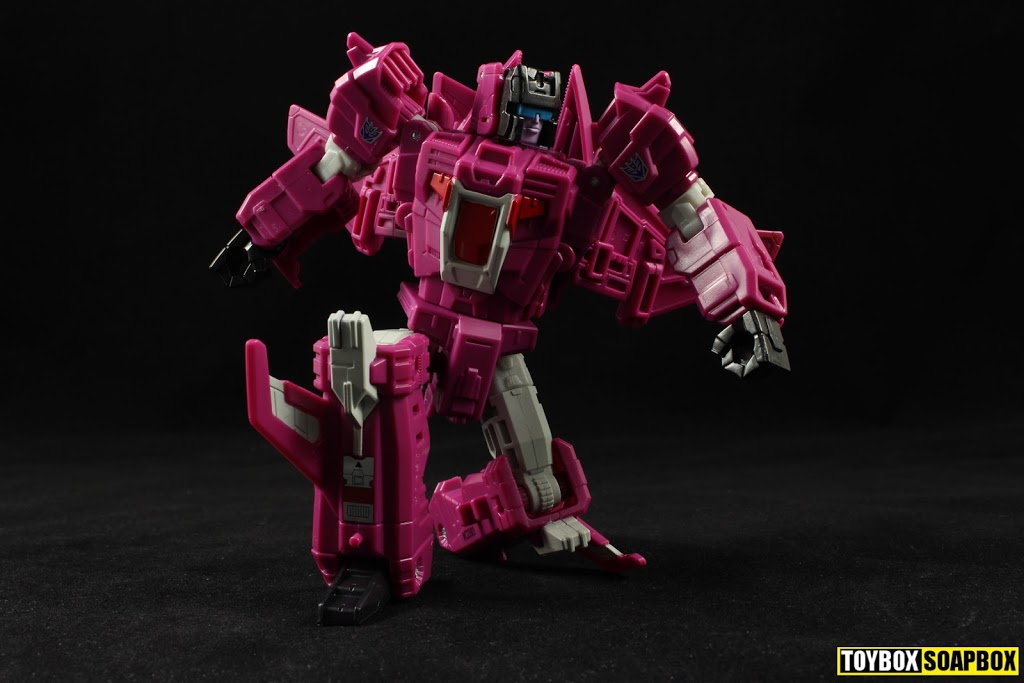 Triggerhappy featured excellent articulation and even though Misfire has lots of new parts the core mold is still there and so articulation is the same. As a demonstration of how things have changed between the two, Misfires waist rotation is done from torso, where Triggerhappy’s was done at the crotch below the waist. It serves to reiterate the lengths Hasbro have gone to in order to switch things up.

With no guns on the arms to get in your way Misfire ends up being more fun to pose. His wings are on a pivot which allows them move further backwards leaving the arms fairly unhindered for movement. This is one of those bots you’ll pick up and just fiddle with for ages. 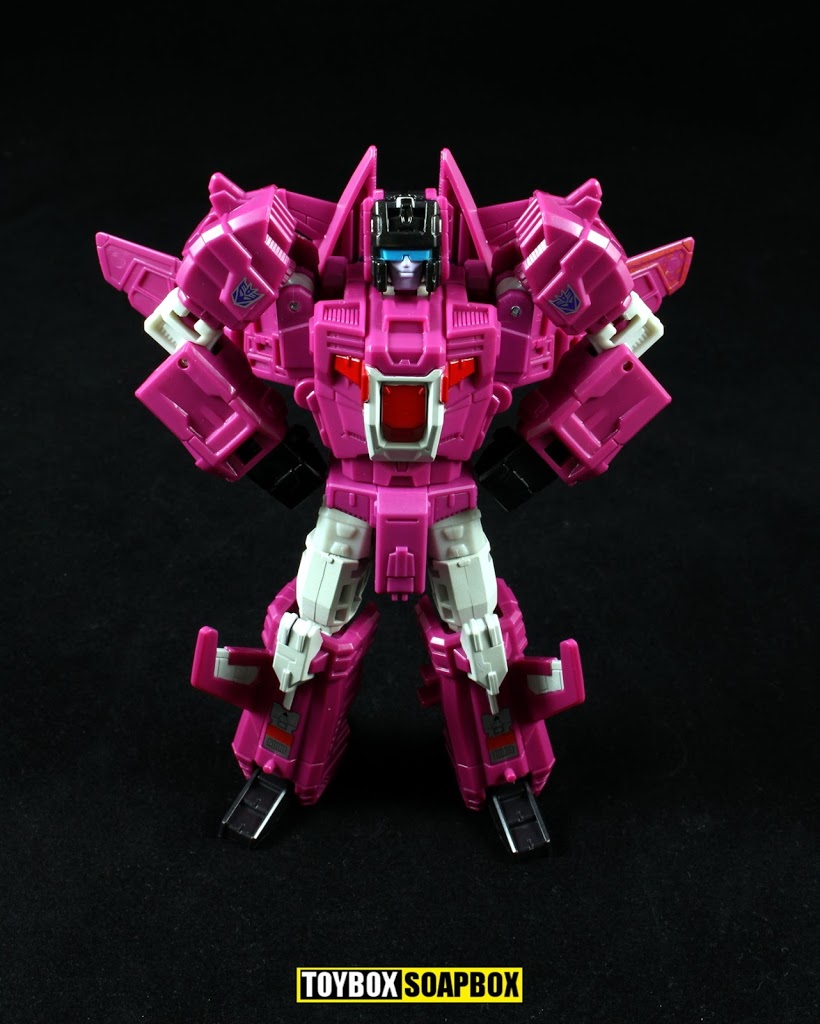 Quality control is good. Joints are tight in general though it would have been nice if the shoulders tabbed more securely to the body. On mine they peg in but more to sit there rather than being held in place. Paint apps are mostly clean, but you may be able to pick up from the picks that the underside of one of the wings has a bunch of random red paint that shouldn’t be there.

Ironic, considering my frequent grumblings about Hasbro’s stinginess with paint. 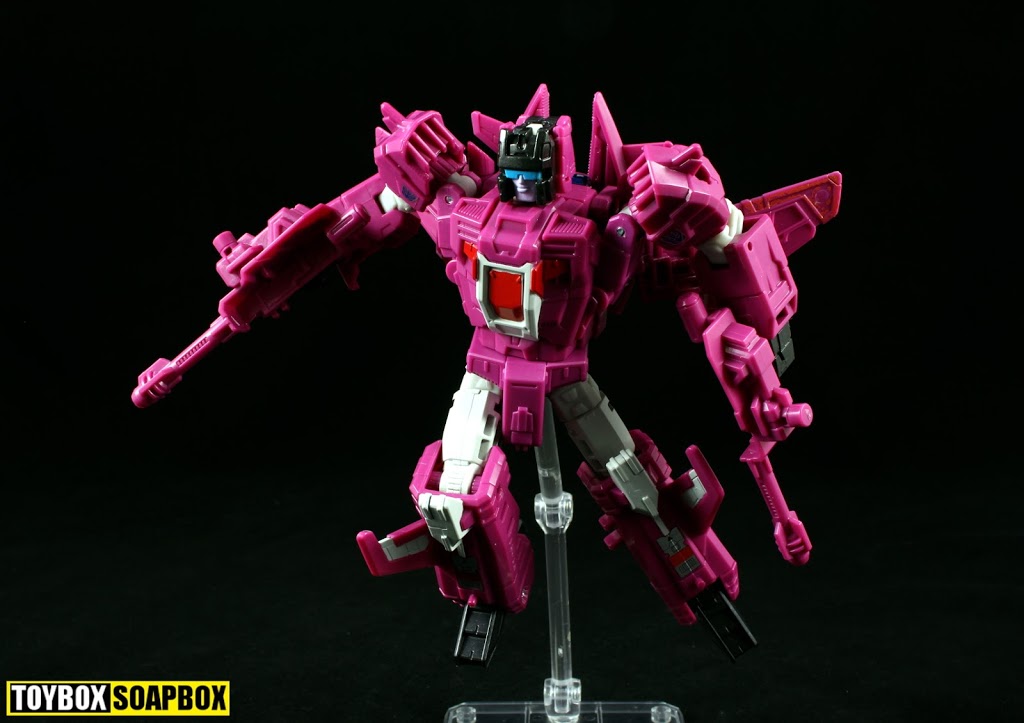 Misfire’s status as a Targetmaster has been revoked and he comes with two rifles that can combine into a larger gun that will accommodate a Titan Master figure. As per usual they look silly being pretty much just an outline of an oversized gun and it would have helped if they were molded in a different colour plastic to Misfire.

Don’t worry folks, Takara are replacing these with an actual Targetmaster to woo you over to their side like the pied pipers of exotic toys that they are. No wonder I can’t afford to do nice things. 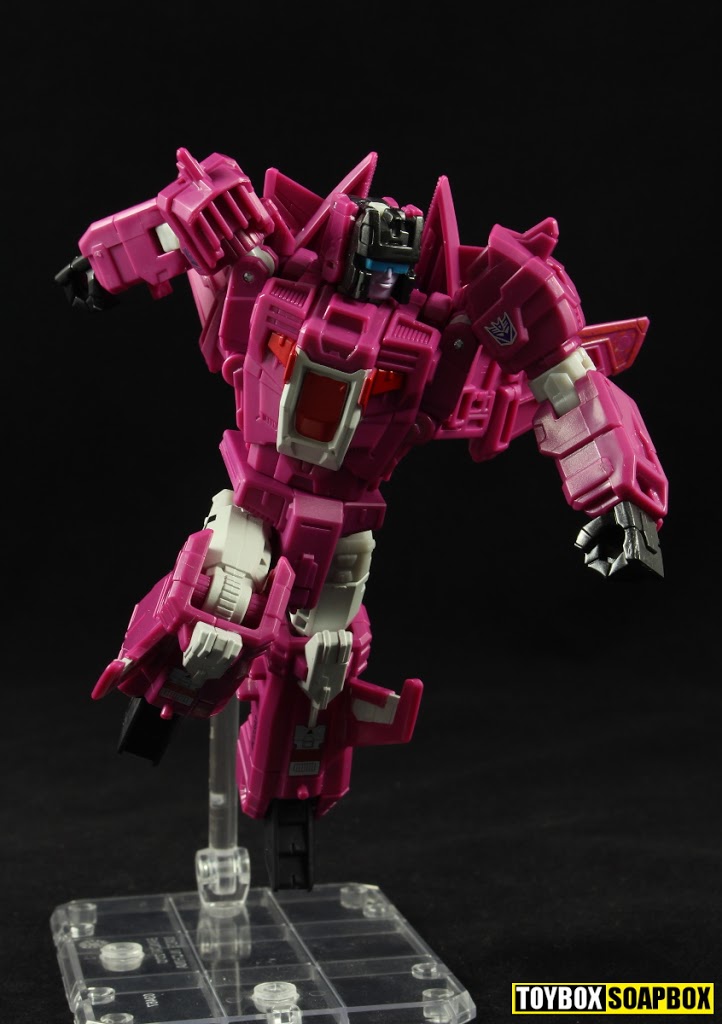 As Titans Return enters it’s twilight, Misfire is another stellar example of precisely what’s made the line such a great experience. It’s a nostalgic throwback to G1 for us oldies, but with a flourish that adds a twist to produce something new and fresh. For a remold it’s almost over the top the lengths Hasbro have gone to in ensuring he’s a distinct entity from Triggerhappy, but every bit are articulated and filled with wonder. It’s new, it’s old, it’s bloody good fun.

Did anyone ever think in their wildest dreams that we’d ever get an updated Misfire that skews so close to the original? Whose next – Snapdragon?