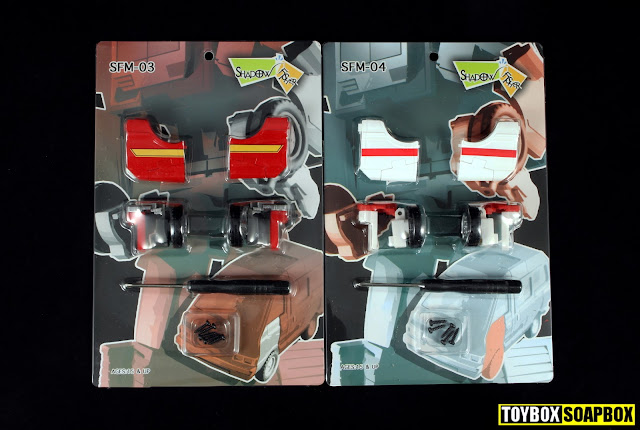 We can’t say as Transformers fans that we don’t have companies catering to our many whims. If third parties aren’t adjusting colour schemes or details on their own figures to suit feedback, they have their ears to the ground ready to fix whatever we don’t like about official figures. Shadow Fisher are a company that appear to specialise in just such upgradery, following their impressive Combiner Wars Devastator upgrade kit with a new set designed to ease the gripe many folks seemed to have with the hip panels Masterpiece Ironhide and Ratchet dared to wear like a Rob Liefeld pouch fest.

Read on to find out whether or not they truly add the finishing touch to an already cracking pair of figures. 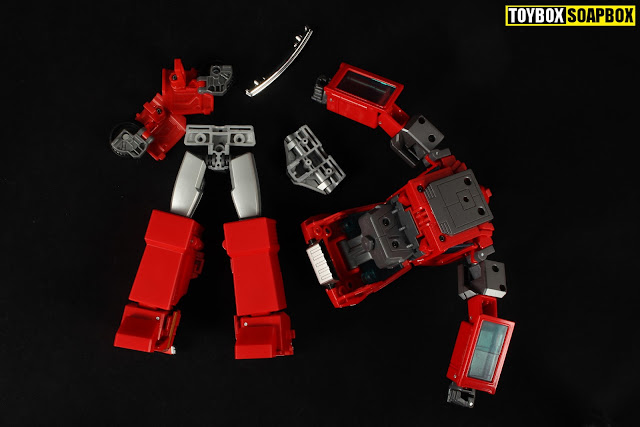 First you must disassemble either Ironhide or Ratchet in a manner that would give Short Circuit nightmares. It’s a simple, straight forward process and Shadow Fisher include a handy screwdriver in each set that you use to remove the two screws that hold the bumper and the three screws that you have to pluck from each bots rear end.

I find this posture….highly dubious.

Once you’ve pulled the poor sods apart it’s just as easy to put them back together. This is a very small kit with a handful of pre-assembled parts so the amount of work is minimal – but you’ll still feel like a champ after.

Shadow Fishers replacement side panels now screw into the front of the cab in the same place as the bumper. It’s a clever use of existing parts to keep things tidy. Next, attach the new wheel parts on their respective sliders, but make sure they are oriented correctly otherwise you’ll screw it all back together and find the wheels can’t clip into place anymore. You don’t want low hanging butt cheeks. 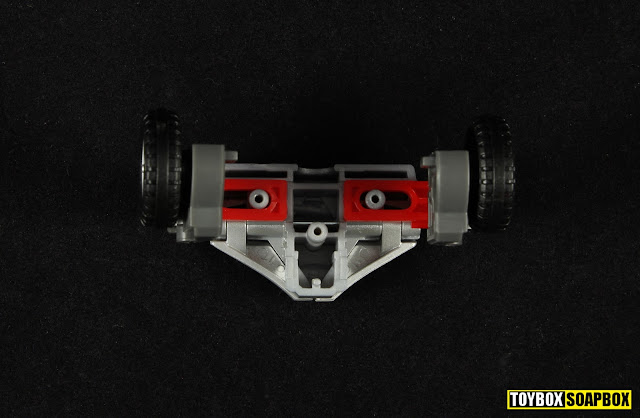 Just as a note of caution, I found once I had installed mine and cobbled it back together, that the fit was too tight preventing the assembly from extending for transformation. It’s always bloody something isn’t it?

You can loosen the screws, but I still needed to have a whip round with a bit of sand paper to make the parts slide freely. It was worse on Ratchet because his waist is white plastic painted red, and some dipstick at the factory felt the need to paint the inside of waist. 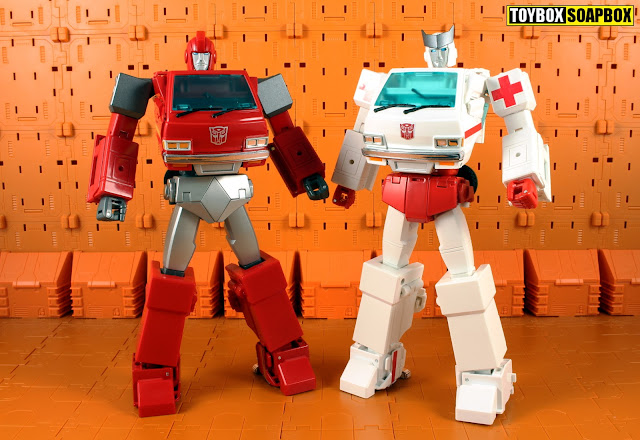 Now you’ve finished the job it’s time to sit back and enjoy your new, hip panel-less bots. I never personally had a problem with the hip panels, they looked fine to me and added a dash of 90’s Rob Liefeld (that’s twice I’ve mentioned the unable to draw feet one ) pouch action to an otherwise very 80’s design. But I know they “ruined” the figure for enough people to shout about it in every corner of social media.

So you can now have them un-runined, if that was your boggle. 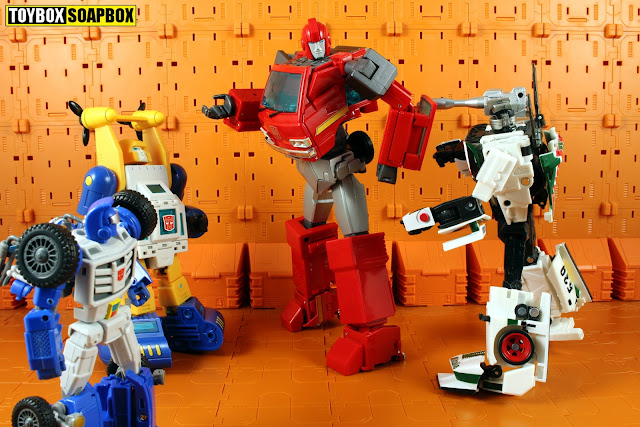 Even as someone who had no beef with the hip panels, I will happily concede that their existing felt like Takara had left Ironhide and Ratchet slightly unfinished. Everything else on these figures folds away and reforms so cleanly and cleverly that their appearance was an odd wrinkle on an otherwise beautifully ironed outfit. 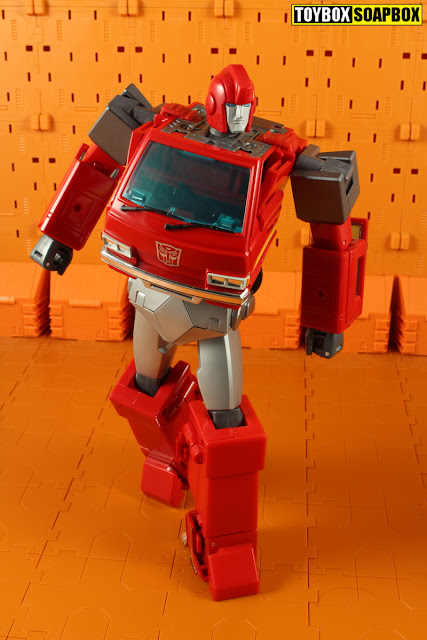 Wisely, Shadow Fisher made a slight concession with the new hip panel because instead of being flat and bland,it looks like overlapping, transformed bits of metal. It doesn’t add deep detail but enough to not be a flat, bland piece. Crucially it blends in and doesn’t look like an add on due to design and perfectly matched colours. 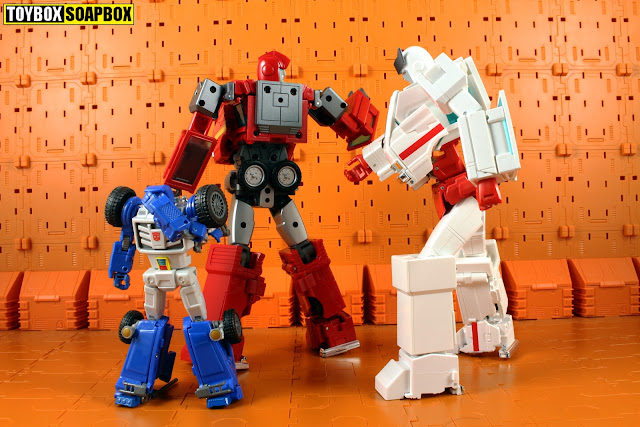 Each of the front wheels still wraps around to give the bots wheel butt cheeks, that hasn’t changed and the kits new wheels match the old ones identically and peg in just as securely as ever, With this cheeky design element I can’t help but picture Ratchet and Ironhide as the old WCW Nitro tag team – “The American Males”. Youtube that theme tune and thank me later, kids.

More usefully as the door panels have now moved to the sides of the torso are filled out better and a small flap on the side of each allows them to fit and slot into place securely. 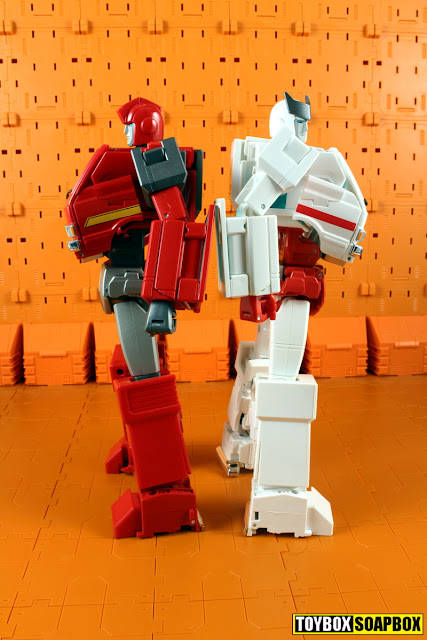 Despite primarily being created to improve aesthetics, Shadow Fishers upgrade does also offer a teeny snap of extra function.  No longer restricted by the hip panels, the legs gain extra room for movement either side which actually does make a difference when trying to get nuanced poses out of this pair. 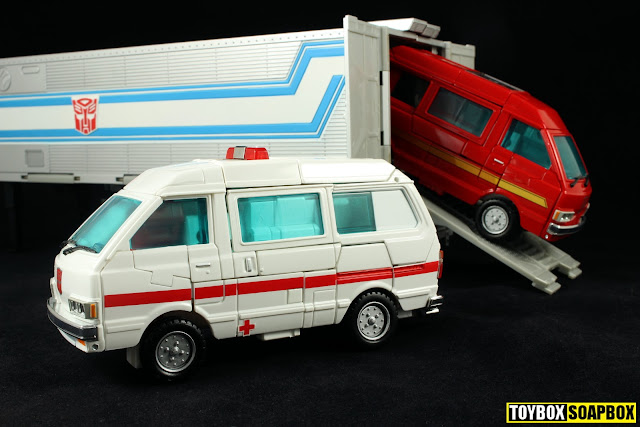 Transformation is mostly the same as before with the obvious caveat that the side door panel is permanently attached to the front of the vehicle. I am so used to transforming these toys back and forth that even a slight difference felt alien and awkward at first but really it’s just a very minor change. 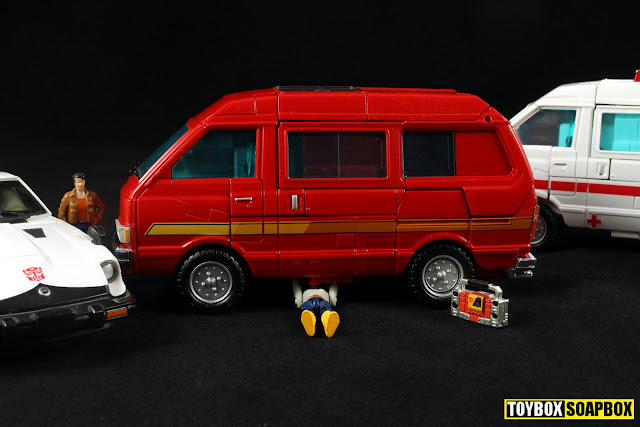 You can see in the photo’s that the panels on the van don’t line up but I didn’t notice this until I was editing the pictures. Blame my failing eyes.

Colours matching is very good with the red being spot on and the yellow stripe similarly matching although I’d swear it was slightly pointing upwards. Am I going crazy? I’ve only had 4 rums so I’m not drunk. Lightly buzzed, maybe, but not Gazza in La Manga drunk, and Gazza would probably not care about this at all. 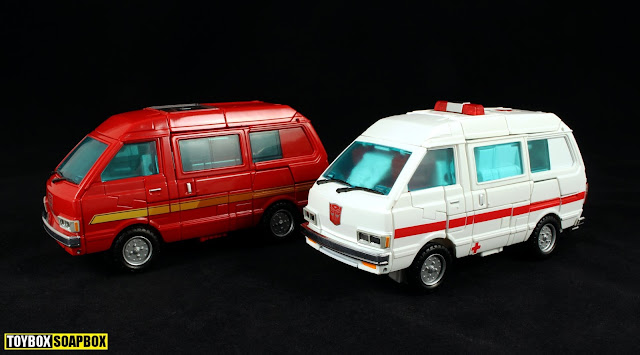 Two weird changes become evident and only if you really look very hard. First, the slight crease in the door below the window runs completely straight. On the original this angles downwards slightly so it doesn’t completely match. The second change is a bit of detailing at the bottom of the door, I think it’s a step, on the original is left off for…well I have no idea. It’s not a big issue and it took me a lot of staring whilst rotating them slowly and listening to REO Speedwagon in an 80’s soft lighting haze to even notice. 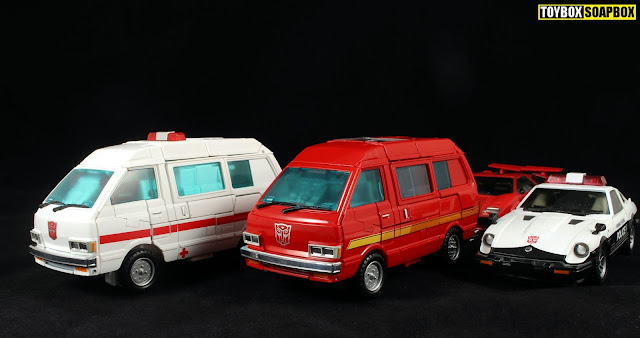 What Shadow Fisher have done is scratched an itch for many people. The original hip panels clearly irked enough people to create a demand for replacements which spans three 3rd party upgrade kits and an “improved” upscaled KO (that also hides the bumper -why are we so fussy?).

All of this begs the question of why didn’t Takara do this themselves? They’ve proven time and time again to be the leaders in this game, and third parties have demonstrated how easily it was to come up with a very simple solution.

.Nothing here is difficult to install, the quality is good, they blend pretty seamlessly and the cost is not expensive. So if the panels do bother you then these are absolutely for you. If they don’t then spend your money on more exciting things like a bag of chips and football stickers.