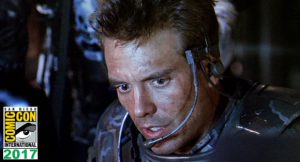 It’s the most wonderful time of the year. Nope, not the snowy, selection box eating one – it’s SDCC 2017 time. For those of us who hopelessly in love with pop culture and everything that is fun in the world, San Diego Comic con is a second Christmas. Throwing out gifts in the form of toy, comic and movie reveals to wet the appetite and make you want to throw money at the screen.

Recent years have seen movie companies use it as an opportunity to pump out new trailers to an eager world and 2017 wasn’t going to fail on that point. Things started off disappointingly with the complete lack of a Jurassic World 2 trailer, but I put aside my misery to resurrect an old feature I used to write, “Short, Controlled Bursts”, as a way to take a quick wander through the various trailers currently causing Youtube to meltdown. Links are provided to save you having to seek them out…I am considerate like that.

Jump off the anti DC bandwagon and don’t deprive yourself of enjoyment out of seeing Batman falling dramatically out of a red sky.

How much work did it take to animate Aquamans hair under water though?

If we hadn’t already seen trailers for Thor Ragnarok, this would have had people running around screaming wearing towels as capes and trying to control thunder. Easily the best movie trailer released at SDCC 2017 it’s everything people who love the movies could ask for, and old timers like me who’ve read comics forever could dream of.
3. Ready Player One
Now this looks like a lot of special effects but they can get away with it as it’s meant to be the inside of a video game. Spielberg will ensure it’s so heart warming you feel like you’ve accidentally eaten a ghost chilli, but his films usually hit the mark and so this should be as fun as it looks.
4. The Defenders
You already know this is going to be great and now it’s The Defenders vs Ripley doing an odd Princess Leia impersonation in the preview window. Mid August seems too far away as I need to see this now.
But is it too much to ask for a less stroppy Danny Rand and more of the fun Billionaire play boy from the comics? Oh and a frickin costume. They literally have Daredevil wearing an Iron Fist style mask to taunt us. Grrr.
5. Stranger Things season 2
Stranger Things season one was excellent and just like Glow makes me long for the day I can step through the tele and back into the 80’s. Everything was better then. Fashion, Movies, Mr T,  food that could kill you but did so in a form form of variety of unnatural colours. Anyone who has ever read an article I’ve written will know I steadfastly refuse to leave the 80’s. And Stranger Things rocks me like a hurricane.
Season two looks like it’s going to be just as good, and if  Dragons Lair hadn’t already won me over (I feel their pain at the death screen), then Ghostbusters and Thriller easily would have. I’d totally dress up like a Ghostbuster all the time if my girlfriend would let me. I’ve already asked if I can wear my replica Thriller jacket to a wedding near Halloween. But as the fun police, she said no…but I can wear it at the reception…..schamone.
6. Voltron season 3
Proving it is entirely possible to make a great, non stupid cartoon about giant transforming robots (take note Hasbro and Machinima), Voltron is back for a third series. The only downside is it’s only 8 episodes of a show where 13 already felt like we needed more,
If Shiro doesn’t return there will be blood. My own as I cry tears of blood the drunk bloke whose always  staggering about outside CO-OP, shouting things about Jesus when I nip in to pick up a Pot Noodle, will view as a sign of the apocalypse.
7. Inhumans
This could go either way. Props for fully realising Lockjaw and Medusa’s hair, but it’s impossible to not just see Ramsay Bolton hamming it up in a variety of plain looking white backgrounds. It does look like it’s going to be another show about people on the run….almost every Marvel show seems to descend into that. Come on guys just give me Blackbolt blowing up the moon with a whisper.
8.  The Gifted
I have this picture in my mind, that every few weeks at Fox aspiring screenwriters walk in and start their new show pitches with “It’s a show about Teenage Mutants being persecuted and living in secret – but it’s not the X-Men. However it’s got characters from X-Men in it. Totes different though”. Guys, just make that X-Men tv show and get it out of your system.
9. Star Trek Discovery

It’s a Star Trek show that looks just as tedious as ever other Star Trek show but with posh special effects. Clearly influenced by the newer movies, ably demonstrated by the Abrams trademark lens flair right at the top of the trailer, I look forward to people banging on about peace whilst getting attacked, a holodeck accident releasing 1930’s gangsters and people generally mumbling about diplomacy when someone just needs to fire the bloody photon torpedoes.

Shock! Barry Allen is returning to a show about Barry Allen! Seems like Killer Frost is back in mopey Kaitlyn mode and Iris does all the things everyone tells her not to do. But hey, it’s perfect tea time fodder.

It doesn’t really tell you a great deal as it’s obviously quite early, and yes most of the trailer is spent on other superheroes….but it’s a super obscure character who I get to smugly get to say “of course I know who he is already, doesn’t everybody?”. It’s a dude who shoots and poops lightning. Course I am on board.

And that’s about everything that caught my attention in terms of trailers, for better or for worse. There was also a trailer shown for Avengers Infinity War, but Marvel didn’t deem us mere mortals who aren’t rich enough to be able to afford to jet to the other side of the planet worthy enough to see it. Fortunately, some sneaky individual videoed it and leaked it on the Internet. It looks as great as an awkwardly framed camera phone capturing about two thirds of a screen at a neck breaking angle can and hopefully Marvel relent and decide to let the rest of us in on what to looks to be something quite special.
Not the best San Diego Comic Con then. Nothing especially exciting, surprising or new Hulk smashing it’s way into the public consciousness as a new Star Wars or Jurassic World trailer might have, but still plenty of stuff to enjoy.
It needed more Dinosaurs though.