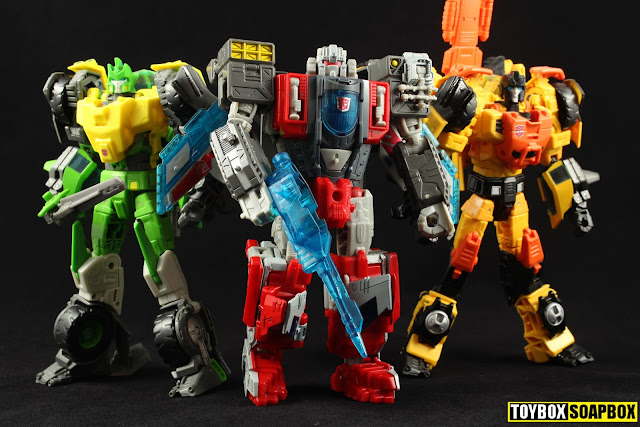 Generation One Broadside is a toy I vividly remember getting and not for a good reason. A rare example of a Transformer purchase where I felt I’d made the wrong call and instantly regretted, but was seduced by being able to get something new and the gamble didn’t pay off.

30 odd years later would those feelings remain with an updated toy in the Titans Return toyline? 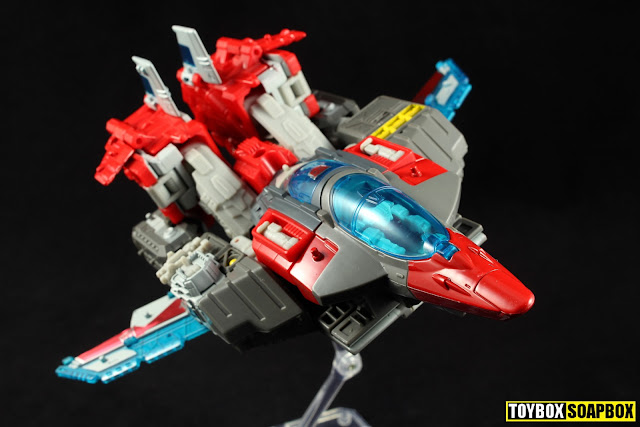 Before journeying to the sublime, let us begin with the ridiculous – jet mode. I’m the biggest fan of futuristic space jets you’ll find. My love of blending familiar modern looks with advanced tech goes all the way back to watching Robotech on the Children’s Channel in the mid 80’s when cable TV was a box on the wall that you had to turn to change the channel. But this? It’s a duck that’s had the misfortune of drunk students sticking two PC towers to it’s backside. Fan modes exist that improve matters but you are fighting an uphill battle any way you go.

G1 Broadside’s jet mode could best be described as a flying coffin, and not in a charming way, so it’s not the strongest starting point to work from anyway. 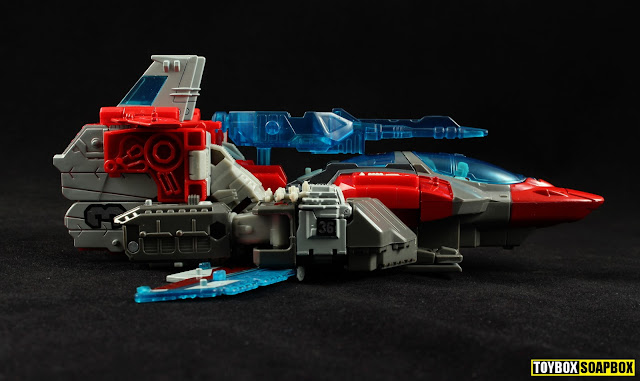 The more you look at it the worse it gets.

Robot and aircraft parts alike are folded and mashed together with no attempt made to disguise 75% of the parts as anything vaguely jet like. This leads to a massive gap in the jets rear end which can be sort of covered by mounting the included rifle (plenty of other pegs on him for that too) and gives him a passenger seat for Titan Masters. So that’s kinda cool right?

Broadside’s robot arms hang from the sides and clip onto corresponding slots on the legs but it’s far from a secure connection. Tail fins jut out in an almost apologetic attempt to create an illusion that this is indeed some kind of aircraft. That they are pointing backwards only serves to make for an even more awkward looking space plane. 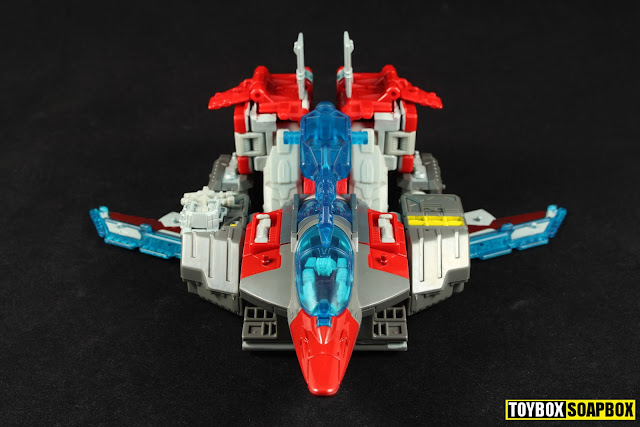 Hasbro have decided this is the place to bring back stickers, but they fit as badly as the England goalkeepers shirt my Gran bought me in 1996 when she thought I was 4 sizes bigger than I was. I looked like a footballing ghost.

The stickers on the wings overlap the edges and the Autobot badge on the rear cockpit window was applied so crookedly I thought it was a sneaky Jame Roberts MTMTE reference and not some sweat shop worker, being paid the equivalent of a Pot Noodle a month, lacking motivation. Stickers are always a lovely waft of nostalgia but if you aren’t applying them yourself than 90% of that nostalgia is taken away. 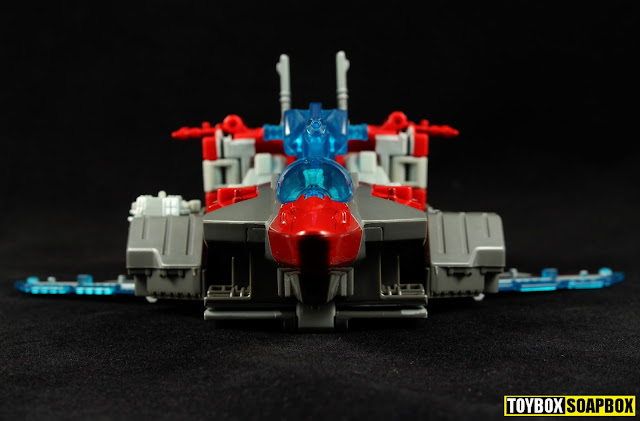 One thing Hasbro did get right is the colours. The grey and red is a striking combo of pure Broadsidery and mixes military with a dash of playfulness. It knows it’s a toy but still wants to convince you it’s something experimental that the military is developing. There, I said something almost kind about it.

Titans Return Broadside doesn’t get landing gear, but he does get an opening cockpit for his Titan Master partner, Blunderbuss to sit in. First, that’s a glorious name which I feel deserves to be dwelt on more. It conjures the image of a bot whose been trapped in Jumanji for years and has emerged in the present to discover his jet mode looks completely mental.

Second, he’s a repaint of Sentinel Prime’s Titan Master partner called Sovereign. That’s a shame as so many of the Titan Master’s have been cool references and it would have been ace to give Broadside one that referenced his mixed up G1 faces and body. Missed opportunity. 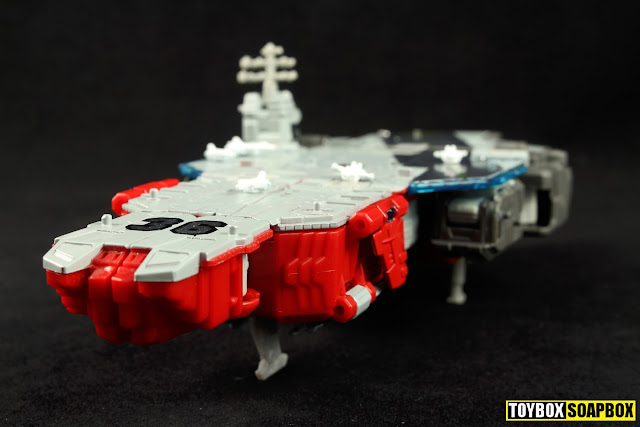 In stark contrast to the jet mode, Broadsides aircraft carrier mode hits all the right notes. It’s not some odd, vague ship shaped thing that requires your imagination and fuzzy eyes to see, it’s actually just an aircraft carrier with no fuss or intrusive gimmicks. Most of the jet parts are hidden in a way the plane mode never mustered, with even the nosecone forming a fairly on point aft of the ship.

All you need with an aircraft carrier is a deck and that’s exactly what you get. A completely flat deck that is loaded with detail but not hyper greebly or naff Cybertronian markings. What is strang,e is to avoid painting the air strip Hasbro have applied a sticker which covers some really nice moulded detailing. Other stickers include another wonky Autobot badge and some military style numbers that compliment the conning tower to make it feel more G.I. Joe than Macross.

As the sort of guy who once Googled “why don’t aircraft carriers sink” – this is right up my Ramsey Street. 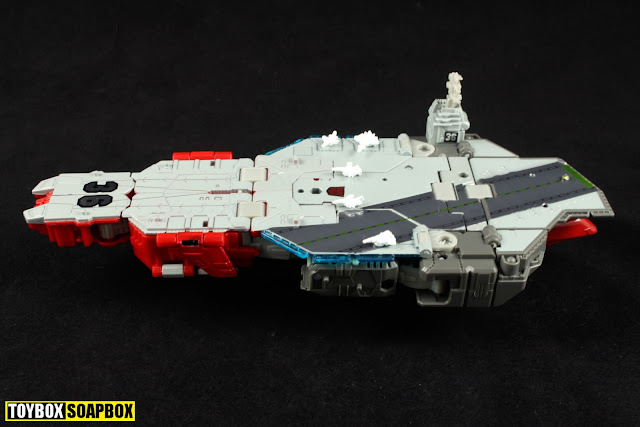 One of my gripes with Transformers in recent years has been the trend to “Cybertronise” alt modes as an excuse for half baked vehicle designs and compromises.  Broadside’s carrier modes doesn’t entirely escape this philosophy as the outline shape isn’t totally accurate to a real world carrier but it’s close enough that it doesn’t stand out. As an extensive retool of Titans Return Alpha Trion that’s an easy compromise to accept and it’s disguised incredibly well.

Titan Master compatibility is still present despite the lack of the obvious space for it, as the conning tower flips open and a TM can go in there in some fashion. 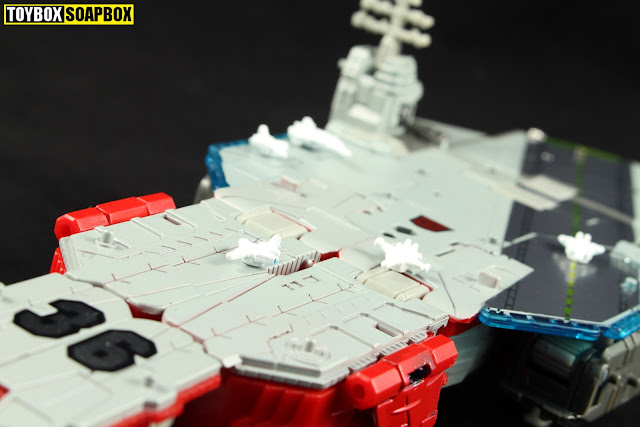 In a further demonstration of how much love Hasbro’s design team poured into this, Broadside includes possibly the most left field accessories of a toy in memory – a miniature team of Aerialbots! Each one is based on their Combiner Wars toy (no Alpha Bravo) right down to having the robot body sculpted under the jet which makes me wonder if they just shrank the CAD model for the figures down Microbots style. Obviously they don’t transform…

Interestingly, each is moulded from hard plastic rather than the usual rubbery material we get, so some small child is probably going to shove one up their nose and sue Hasbro. Specifically, they are cast from the same clear blue plastic as his gun and painted white (I’d have preferred military grey) which is obvious once you cut them from the sprue and it leaves an unsightly missing chunk of paint. 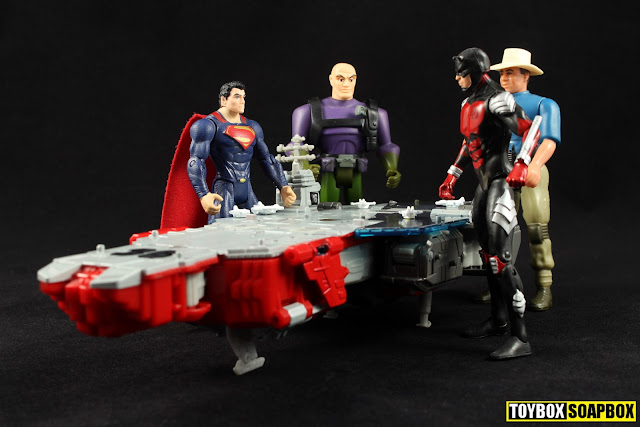 Three landing skids pop out and act like table legs. This comes in handy when your other action figures want to set up a games night and use poor Broadside as a table.

Aircraft carrier/Dungeons and Dragons gaming/military strategy table mode is ace and by some distance my favourite mode this toy has. On the surface this should be one of the most boring alt modes in existence but by virtue of it looking like something semi real and having a fun feature like the micro Aerialbots it elevates it into one of my favourites of the entire line and casts my mind back to the glorious days of Micromaster bases. 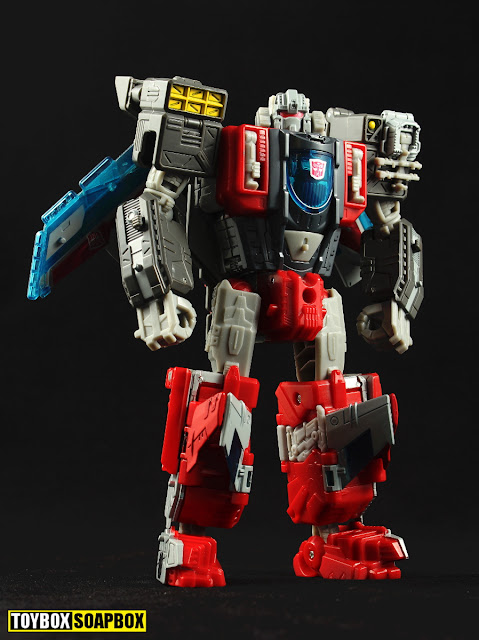 Transforming Titans Return Broadside is a simple exercise. If you are going from jet mode, that’s already most of the way there being essentially just robot mode laid down with it’s knees up.

The only point’s of contention I have are the fins don’t fold away and makes them look even more ridiculous than they do pointing backwards in jet mode. You can adjust them to get a better look though so it’s a minor issue. If you are looking for Alpha Trion’s influence then look at Broadsides feet because he appears to be rocking Alpha Trion’s Air Jordan’s. 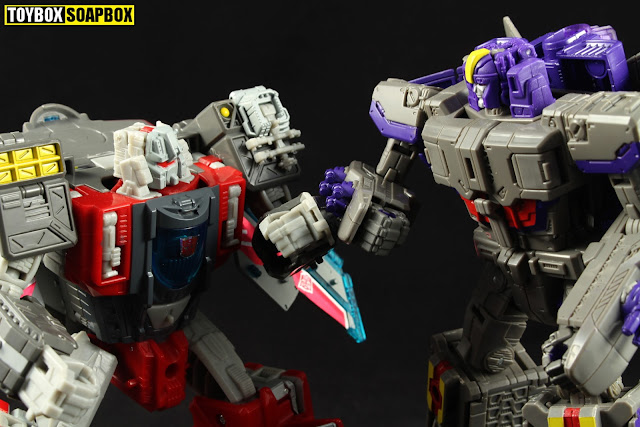 Broadside in robot mode is….Broadside. Hasbro have employed a mish mash of interpretations for the characters that have featured in Titans Return and Broadside skews heavily towards to IDW comic style designs without being based on any design in particular, save for it being the now standard toy based version of the two G1 character models. Brutish, buff and heavy duty, this is a look that perfectly befits Broadside with no need to be accurate to any source material. His hands even have mini Vega style claws. I would place him more as Mayor Mike Haggar type than the cage diving Vega though.

That doesn’t mean the details miss the mark as most of his G1 design elements appear in some form. He retains the signature cockpit chest, his legs are big red blocks and there’s a lot of grey mixing with the red. You do get a load of the other modes parts here but it doesn’t feel as egregious as it does on that pesky jet mode. Even the table legs either side of his chest. Transformers should be robots with vehicle parts sticking out, not vehicles with other vehicle parts sat on top.

Predictably, Broadsides head sculpt follows the final, face plated, toy accurate G1 character design that has become the norm. Titans Return has been pumping out some of the best head sculpts of any Transformers line ever, including Masterpiece, and Broadside continues that trend.

Like all voyager figures he does have pop up bits either side of his head and Broadsides activate if you push his tummy. Awwww. It’s almost cute, perhaps he should have come with a Teddy Bear accessory.

Articulation is fairly standard with loads of joints but various things hindering exactly what you can do with them. The arms can rotate, swing outwards and bend at the elbow, but the wings can get in the way and catch things. His legs do what you’d expect but the pegs either side of his inappropriately screw holed crotch stop them going fully straight but that’s me being picky. Where I am not is the feet, which can tilt forward or backwards but not side to side. We are talking about a retail voyager so that may still sound picky but his jet nose makes him back heavy and not being able to plant his full feet solidly can hinder posing.

He’s Broadside though, and his only role is to stand at the back of a crowd looking tough. He’s got that down. 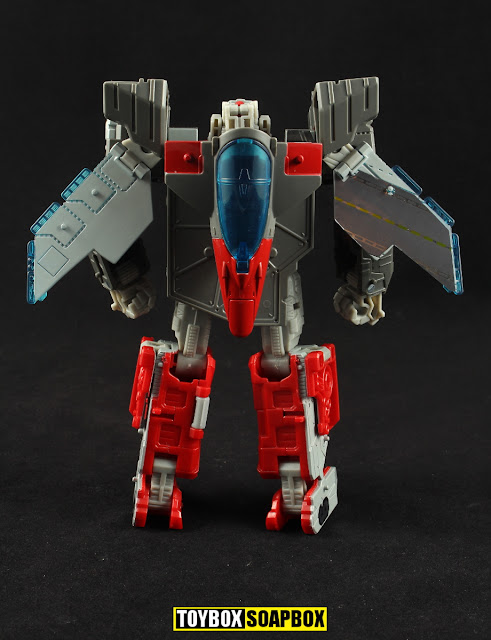 QC is fine, non of the joints are loose, but the carrier deck sticker does make it tough for the pegs on the back to full clip in. Everything else seems fairly spot on. There’s a nice thickness to the figure which has been lacking over the last few years that makes Broadside feel nice and toy like to handle.

Where paint is used, it’s tidy and there’s not much to complain about. Some of the grey that turns the reverse of the wings into deck panels is a bit sloppy round the edges but those don’t manifest in a meaningful way in any mode. It’s just something to moan about, like those wonky stickers….that I could easily fix.

Let me just have this moanment. *gets coat*

Broadside may have started off badly with a shambolic jet mode, but he grows on you with each of his other modes and you won’t be able to fight that feeling anymore that you end up quite liking him. He isn’t a favourite but Broadside is never going to be unless they do a full USS Flagg scaled version with hanger bays and all that lark. *drools*

The Voyagers have generally been, to me, some of Titans Return weaker offerings (but non bad) and Broadside doesn’t do much to move the needle in either direction. Not great, not bad,  he’s a reasonable Voyager class figure that feels a little like a throwback to Energon more than it does G1. He has the chunkiness not just in look but also in the plastic and at least two of the modes make little effort to hide kibble. That fun Energon feel captures your heart a bit and makes even that jet mode forgivable….sort of.

So Broadside is a win, albeit a small one.