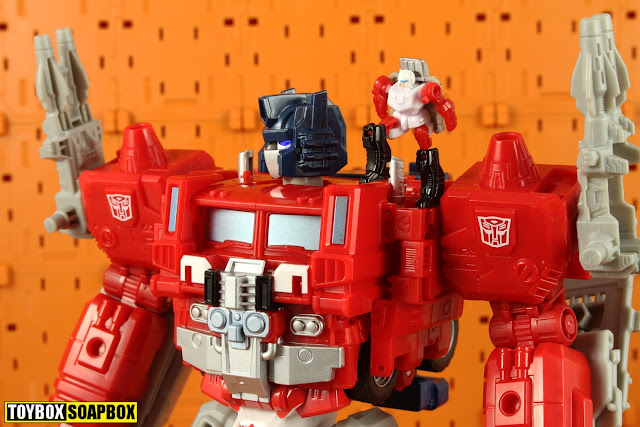 Perfect Effect carved out a pretty decent niche as the go to guys for upgrade kits during Combiner Wars and now they’ve set their sights on Titans Returns which will please many people who hate keeping hold of money. like myself. Their latest attempt to aggrandise a figure falls on Takara’s Marmite flavoured bot – Legends Super Ginrai. Or Hasbro’s Powermaster Optimus Prime. It works on both so go with whatever you fancy.

I warn you now that I am going to use Ginrai and Prime, plus a whole heap of other Japanese and western G1 terms interchangeably. So deal with it better than Magnus. 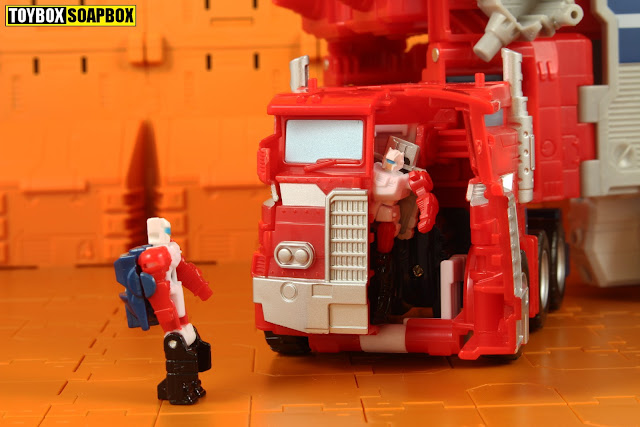 Perfect Effect may well have named the mini figure “Jinrai” in the laziest attempt to skirt trademark laws since Generation Toy’s annoying to type J4ZZ – but we all know this is Ginrai (or Hi-Q). If you aren’t brushed up on your Japanese G1 then Ginrai was a character from Masterforce who used 80’s slap bracelets to magic up an Optimus Prime shaped robot suit. It wasn’t the Transformers we knew in the west and if you want to know more it’s easier to read the excellent tfwiki article and admire his hair combing skills, than it is to listen to me try to explain a floating demon ball of energy that looked a bit like Saw Boss’s head.

And the likeness is spot on to both. Perfect Effect PC-15 recreates the characters space shell suit design as a fantastic, super poseable little mini-figure with a frightening amount of detail for something this diddy.

Ginrai or Hi-Q the little Nebulan weirdo – it’s completely up to you. Don’t let them pigeon hole you, man. 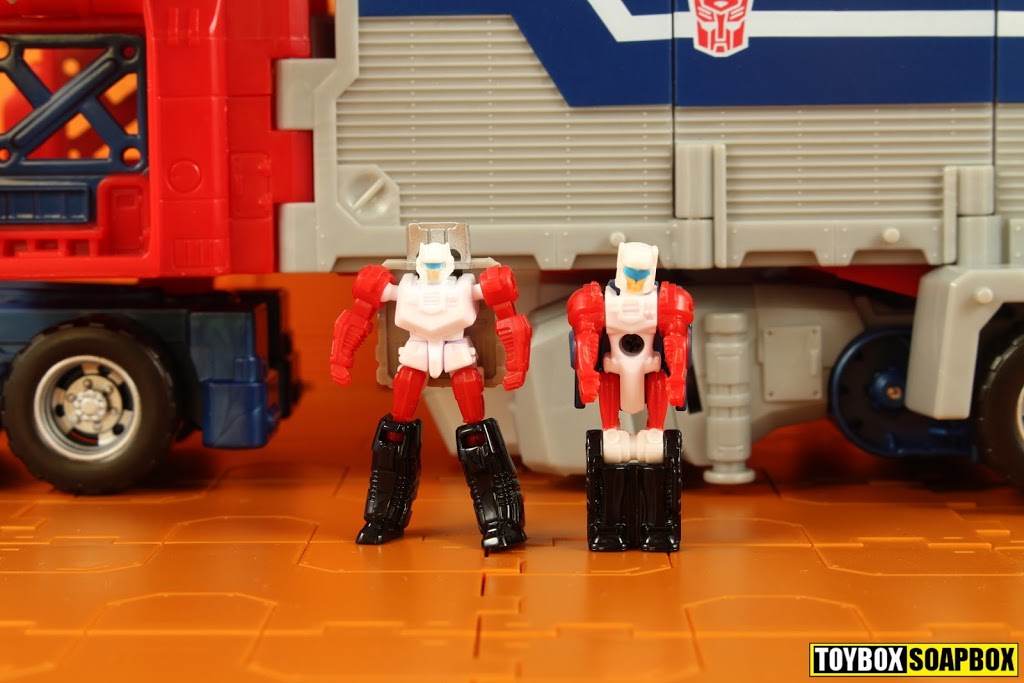 If you have the original Powermaster figure and compare the two side by side, almost all the detail carries over and this even extends to things my failing eyes can barely see like the detailing on the upper thigh. He’s rocking the tiny visored helmet of the original toy that looks like something from an 80’s episode of The Clothes Show (you’re humming the theme tune now, no doubt) and ensures he can fill in for either Hi-Q or Ginrai depending on your preference. Colours are beautifully saturated and giving the figure life and energy through colour that yells cartoon at you.

What stands out most are the proportions though. Perfect Effect have ditched that “lying in a coffin” pose all the Titan Masters have, and captured a better physique and body shape. It’s still a dude in a robot shell suit, but that robot shell suit looks like it could do more than shuffle or goose step. Takara have recently shown it doesn’t have to be that way with their fantastic Dianauts all possessing a bewildering level of articulation that we aren’t used to seeing on such small scale figures.

There’s ball jointed shoulders shoulders and knees, hips that swivel forwards and outwards. He’s just an elbow bend short of greatness. The head can’t swivel but does anyone care? If that could move it would just become something else to go up the hoover. 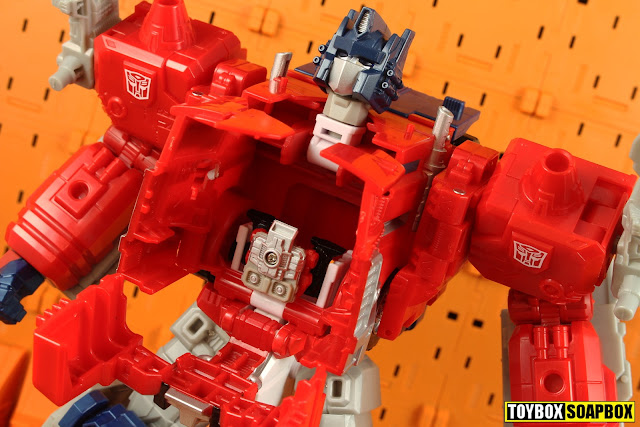 As Jinrai is no longer required to turn into a head (I’m getting to that, don’t worry), he returns to the traditional alternate mode of Powermaster/Godmaster engine. I’ve never been sold on this concept because I struggled to wrap my head around the notion of having enough energy to get up off the couch on a sunday evening to put the bin out, let alone having to provide enough energy for bots to fly around the globe lobbing buildings at one another.

Legs need to be horrifically bent in ways no poor human body was designed to contort but there really isn’t much to the transformation and there doesn’t need to be. Moving the legs forward and swivelling them on a separate joint is clever but it’s all about turning into a small block, and Perfect Effect accomplish that. Each detail on the back is lifted from the vintage toy with a degree of accuracy not seen on the Takara Super Ginrai’s faux Powermaster chest harness thingy.

Young Jinrai here can’t plug into the cab grill in either mode but he can slot inside the chest cavity like some sort of chest bursting radiator. 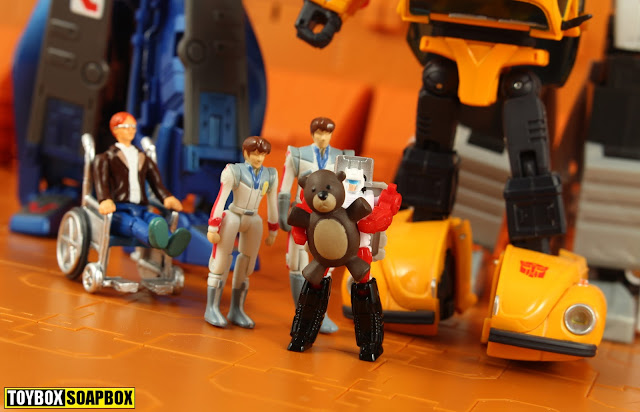 He’s not perfect but not-Ginrai is a pretty fun figure and one that makes you a little disappointed that all “Master” figures aren’t like it. There’s no way it would survive in the hands of a child so it’s perhaps understandable and in that context it validates third parties offering kits like this. Jinrai’s interactivity with Legends Super Ginrai is pretty limited, so the crazy thing is the main feature of this upgrade kit doesn’t actually upgrade this figure it upgrades a future upgrade kit. Perfect Effect have a full transforming cab upgrade coming out soon that does allow you to plug this little dude all up in Prime’s grill and obviously they want to give people reasons to buy it. This is a fun, pleasingly saturated micro sized reason.

But man, it makes me excited at the prospect of potential Masterpiece “Masters” with the articulation and engineering of the Dianauts. 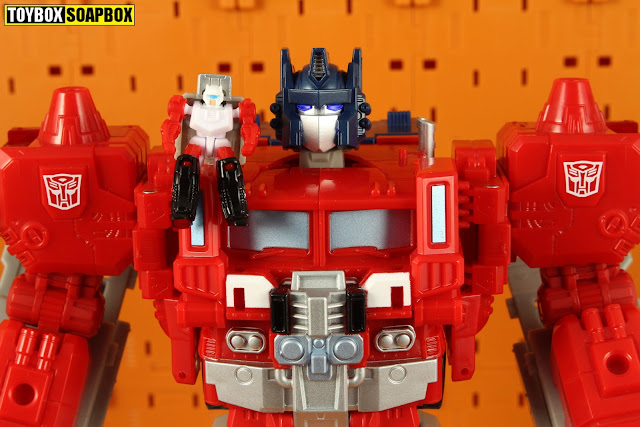 The next upgrade in Perfect Effect’s boxy bag is a brand new head whose installation is as simple as sliding the old head out on a mushroom peg and sliding the new one into it’s place. At first I “pegged” (wakka wakka! Now read the rest of this article in Fozzy’s voice) this for a completely superfluous upgrade that needlessly pushed up the price, but if you are replacing the Ginrai/Apex Titan Master then I guess a new face is needed.

At first glance it might look like a carbon copy of the original head only with actual eyes, but there are a couple of subtle tweeks that once spotted make a massive difference in my opinion. First, the head is fractionally smaller, and when I say this I mean so much that I might be wrong and it might not even be smaller. However, the slightest reduction in size has a weird effect of improving the proportions so that’s a big plus, unless I am imagining it. Next, the domed part of the hard is steeper, whilst the monobrow ditches the line detailing of the TR helmet, and opts for a sharper more aggressive brow. Moving onto his face he gets his own eyes and the face plate takes on more of a curve to better evoke the standard Optimus Prime look. Finally, the colour is a darker shade of blue and there’s no light patches like there are on both my Hasbro and Takara versions

These are all little things that are not immediately obvious but it’s precisely the sort of thing fussy gits like me look for. Like when I was a kid and I noticed that the football shirts the players wore were slightly different to the replica shirts you can buy, which caused me to swear vengeance on the Nottingham Forest club shop in 1994.

This is how all good comic book villains origin stories are made. 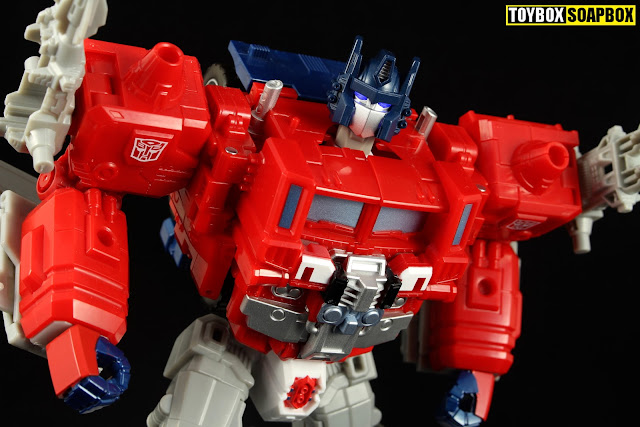 Takara’s obsession with giving Optimus dead eyes is ignored by Perfect Effect who feel so strongly they stuck light bulbs in there. Yep, it looks nice and gives off a pretty glow, but I like my figures to look good all of the time – not just when I go up to them and press a button. I want to glance at them on a shelf and go “wow, all that money stood there looks fantastic” not have to get up and purposefully press a button step back, and then turn it off and continue trying to defeat M Bison. Most collectors are pretty switched on when it comes to battery leakage, so won’t leave the batteries in anyway. So what purpose does this feature ultimately serve?

Painting the eyes would have been a much better use of every bodies time and money, but hey at least they had the courtesy to throw in the batteries. So I no longer have to go through packs of 800 watch batteries from the pound shop only to find they still don’t have the right ones. 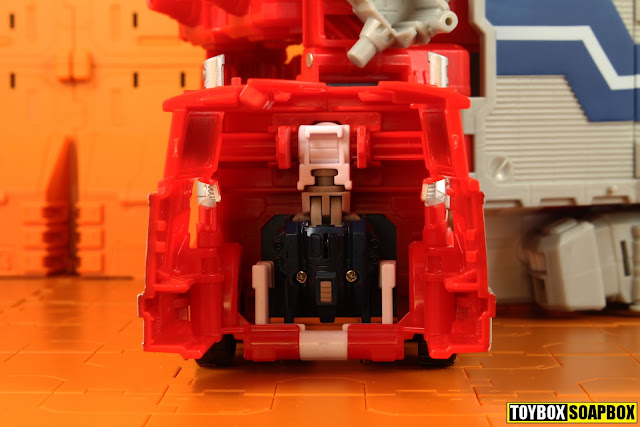 Storage is the same as the stock helmet with it flipping down and into the cab, but due to those electronics, it no longer folds up into a Titan Master seat. Jinrai can’t sit in there but you can squeeze him in stood up, tightly if you absolutely have to find a way to get him in there.

If you are planning to buy the forthcoming cab upgrade, be aware that you need this head if you want it to store in the new cabs chest. You can use the stock Takara/Hasbro helmet in robot mode, but the hinge on the back won’t fit in the new cab. Which I suppose they could get away with as an unintentional homage to the vintage toy. You’d even have to throw it in the trailer in alt mode.

That’s how they get you isn’t it. “You don’t need the other upgrade kit, it’s just more convenient if you do. Ah go on, go on, go on” 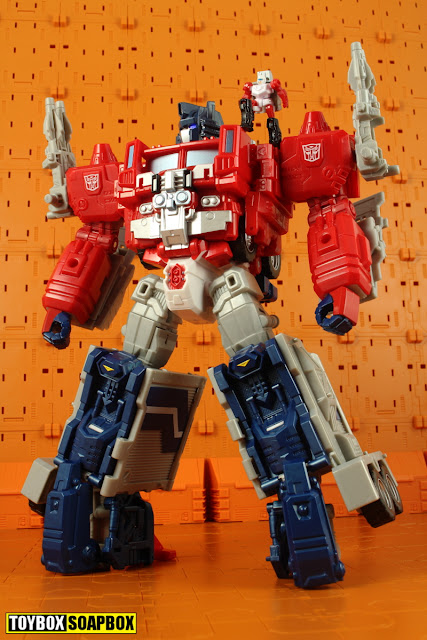 Someone at Perfect Effect obviously thinks like me, because they also threw in a pair of colour matched to Legends Super Ginrai thighs. Rage (and covering my chips in too much Nando’s Peri Peri salt) gives me heart burn each time Hasbro reveal a figure with gaping holes in their figures with visible cost cutting. So I wish more companies would throw in things like this. They aren’t a massive deal but they do improve your figure and make it feel a bit more complete. I’m paying a fortune for these things – I want them to feel finished.

That’s what this kit does, it just adds a bit of extra polish to a figure that doesn’t desperately need it. Nothing is drastic and a cursory glance at Legends Ginrai’s capabilities doesn’t indicate any optical distinct deficiencies without it. So it’s absolutely not value for money (the price is obscene for what you get) but it does make an improvement and nudge the base figure closer to a more accurate reflection of what many collectors are looking for. But then the flipside of that outdated £1 coin is it completely nerfs the fun gimmick that Titan’s Return is built on and ironically sets you on a path to another, far more radical upgrade kit.