In the early 80’s Takara released a line of toys called “Micro Change” which was centered around 1:1 scale objects. Hasbro would later fold many of the toys from it into its Transformers line with many several of the franchises most iconic characters being drawn from it. A micro cassette recorder would later go on to be Soundwave, Megatron was pulled from one of the gun toys, a camera would split into three bots to become Reflector and so on and so on.

Hasbro continued to rummage around in Takara’s toolbox and found the Microscope robot from Micro Change who would then be reborn as Perceptor – the Autobots science guy.

Now, 30 something years later Hasbro have returned to the character in the Titans Return line with a brand new figure that feels for all the world that it wants to take on a journey back into the past. 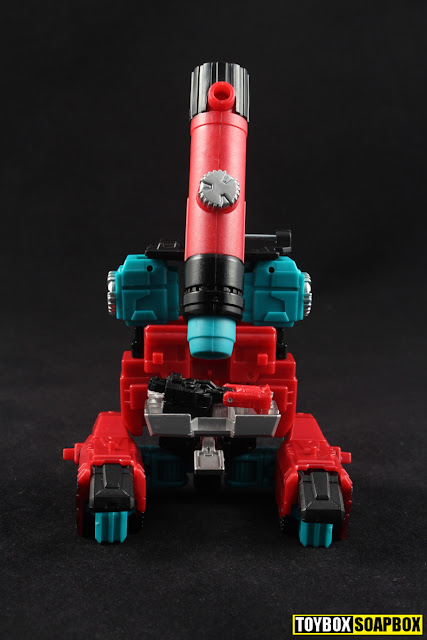 Last time Perceptor got a modern toy it was in the form of a “scientific expedition vehicle” (thanks TFwiki) so it warms my heart to see Titans Return Perceptor return to his roots with an all new microscope mode that looks as close to vintage as any modern toy has ever gotten. Virtually every detail is drawn from the original G1 toy from the colours to it’s shape the only thing not to join us in 2017 is the chrome. Which is good because what doesn’t exist can’t flake off. *Glares at MP-28*.

Aside from looking the part, Titans Return Perceptor is just as functional. The microscope lens actually works (it’s also removeable and can be wielded as a weapon) and the silver dial refocuses the lens which causes the blue tip to extend and retract as required. If I was immature I’d stick a crass joke in at this point, but I am a grown up so let’s keep talking about toys… 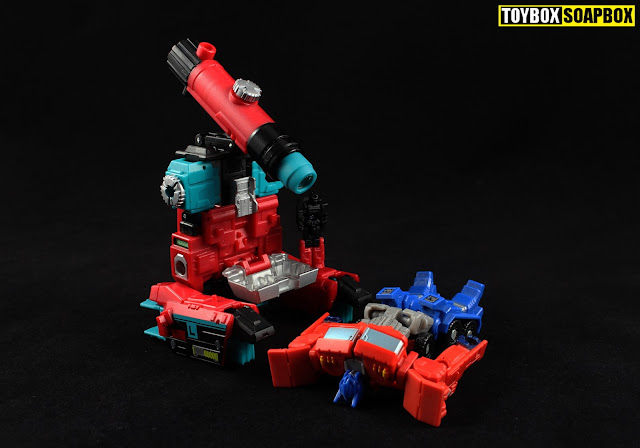 Titans Return Perceptor’s silver chest opens on multiple hinges which free up space for the arms to slot in. One of these is a pretty loose hinge in the crotch ( I bet he doesn’t put that on his Tinder profile) which gravity likes to pull downwards. The idea is the chest is to supposed to act as a specimen tray in which you can lay Convex, the Titan Master partner, in lieu of Perceptor having a cockpit to store the wee fella. Hasbro’s storage solution is to have him examine himself or you can plug his rifle into any of the 5mm ports that adorn his boy and have him sit in that. Weaponised microscope….tell me that doesn’t sound awesome?
A cute touch would have been to chuck in some of those slides from the recent G1 reissue to make use of the working microscope lenses, because when I try looking through the lens all I see is blurry stuff that induces a headache and makes my vision fuzzy. 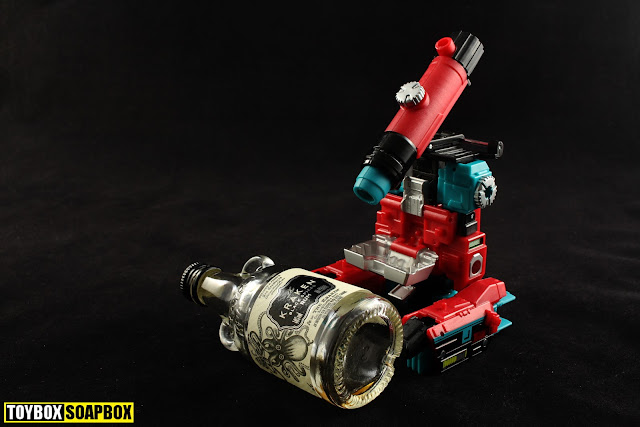 Colours are a perfectly G1 Perceptor mix of animation and toy. They walk a nice line combining the two without straying too far into one or the other. Deep red, lush blue are the characters signature colours in both sets of media and they are finished off with some some lovely black and silver sections that add contrast. On either leg there is some lovely paintwork in homage of some of the stickers featured on the vintage toy. One of the best features of Titans Return has been Hasbro pushing the boat out on the odd figure just to remind us that they can add a touch of class when they really fancy it.
When Takara release their version of this toy, I’d expect the the blues to be more sherberty to reflect the cartoon, and the chest door to be outlined in white, but there isn’t a great deal more they need to do. Won’t stop me chucking money at the screen and screaming though. 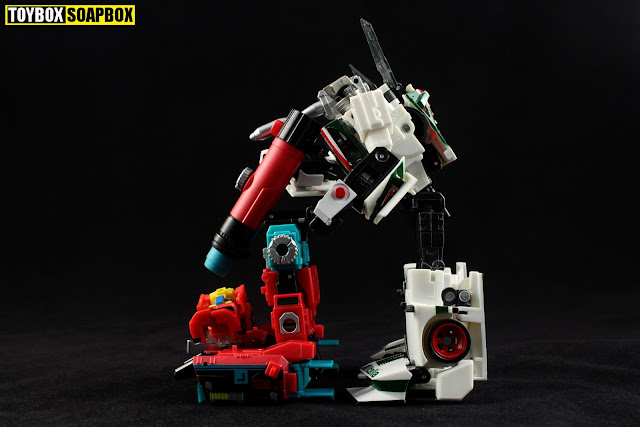 Perceptor does hold together pretty well, though I did find I had to keep readjusting his hips to get the legs to stay pegged in. If you get them at the wrong angle, they will start to push the arms out a little and whilst there’s no danger of anything flapping around, this is after all basically a robot sat down with his arms in the air, there isn’t the satisfying locking clunk you might like.

Hasbro have opted to construct Titans Return Perceptor out of a matte plastic. It doesn’t feel bad but it is a different sensation to the noticeably glossier other member of the Titans Return line up. Reminds me strongly of MMC’s much loved Feral Rex figures. Not bad company to be in. 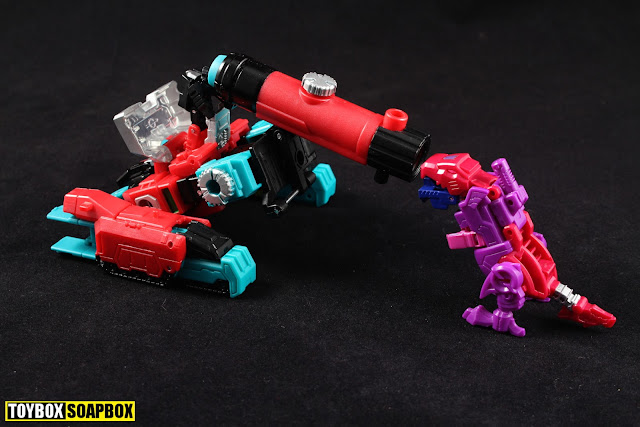 Tilt the body, pull out the wheeled treads and you’ve got Perceptor’s “Microscope doing the Smooth Criminal” third mode. This was present on the vintage toy and is just as ludicrous in 2017. The lack of a cockpit for Convex is more profoundly felt here as the poor sod has to stand up or sit in his gun if you choose to attach it…anywhere. So it looks silly but who cares? Few people are ever going to bother with this mode but what matters is that Hasbro made an obvious effort to ensure it was in. This isn’t some vaguely familiar fan mode, it’s intentional with parts that exist only to facilitate you having the opportunity to scratch that nostalgia itch. Even the wheel on the back of the originals waist is replicated on this guy. 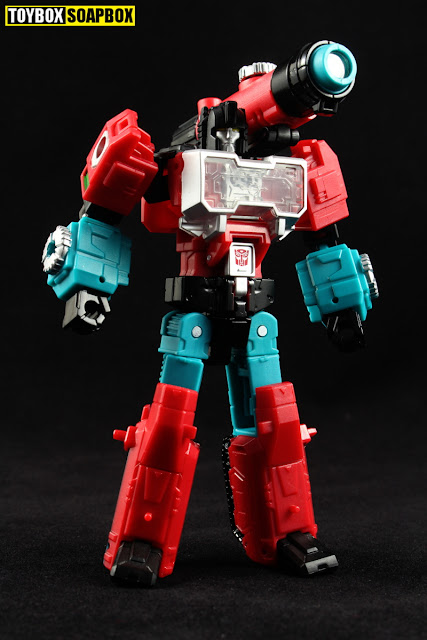 Transformation is just as much of an homage to the vintage toy as everything else. Arms, legs and chest make use of modern engineering tricks to do the same things as the G1 toy, and the odd silver piece that sits under the tray in alt mode flips up to reveal an Autobot badge stomach tattoo. A twee alternative to Tupac and Thug Life.

After removing the head, the whole neck area extends up in a fashion akin to Master of the Universe Mekanek which allows the arms to slot in following little guidelines that slide into wrists. All that’s left then is to position the lens which gets a new multi hinged assembly that is very similar to another favourite from this line – Hardhead.

Everything about the transformation feels referential but with a new twist. And not a crap sliver of fruit slapped onto the side of your drink glass kind of twist. 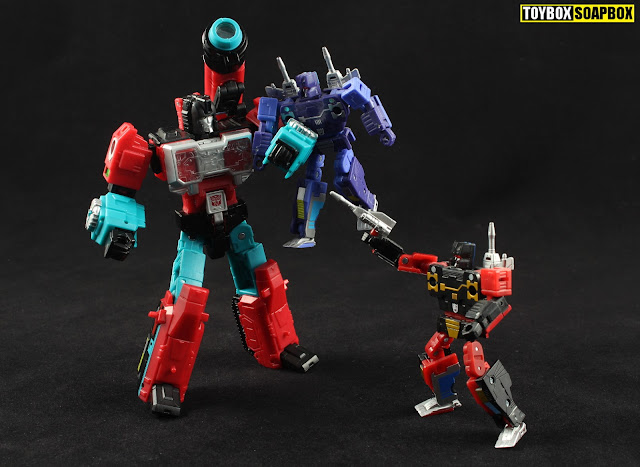 Where the alt mode sought to balance things between the cartoon and the toy, Titans Return Perceptor’s robot form leans heavily towards the animation model. Colour and details are on point but it’s the figures stature and proportions where the cartoon’s influence is most keenly felt. Tall, boxy, lanky the shape is completely different to the vintage toy made seemed to be aiming for a robot version of the Kool-Aid guy.

Generations has in the past cribbed from IDW and some of those stylings do make into the otherwise very G1 themed Titans Return figure. The pointy shoulders are ripped right from All Hail Megatron, whilst the chest windows and knee guards are clearly inspired by Perceptor’s portrayal across the IDW comics rather than being directly copied from anything in particular.

It’s an almost perfect melding of looks, but I am not keen on the silver panel that sits behind the clear chest window. It’s inexplicably distracting and doesn’t need to be silver.

I’ve always got to find something to moan about don’t I? Not everything can be a Mr Perfect throwing basket balls over his heads for three points. On a side note, Perceptor would be “perfect” as The Genius…wonder if he can recite poetry? 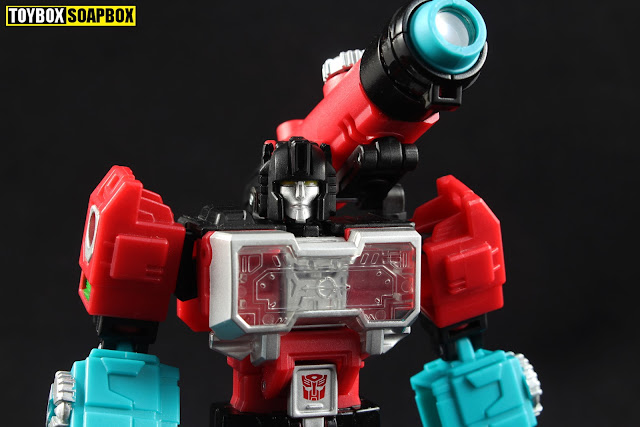 Perceptor wears the Expressionless face of the office manager doing your performance review , staring out of a window and his mind is somewhere else with the opening bars”She’s a Rainbow” playing in his mind before he’s about to burst into the chorus. He doesn’t care about your work life balance – he’s got unicorns to fly (pencils to sharpen)

It’s the sort of face which would befit the current comics rather than, the smug wide faced git of the cartoon. His helmet is the traditional dome you’d expect and there’s a nice bit of synergy that sees the Titan Master arms fill out the sides of it to match his traditional look. Annoyingly the card art shows Perceptor’s head crest coloured it’s usual yellow but the actual figure lacks that paint app. Takara will no doubt include it whilst Reprolabels will probably offer some mad hologlow option.

Convex is the name of the Titan Master and his robot form takes the shape of an adorable itty bitty version of G1 Perceptor’s toy. Rendered primarily in black plastic, with no paint apps to speak of, all detail is lost into a void of blackness. How did Hasbro not name the Titan Master “Magnificus”? It’s the standard Perceptor repaint – and it’s always in black. 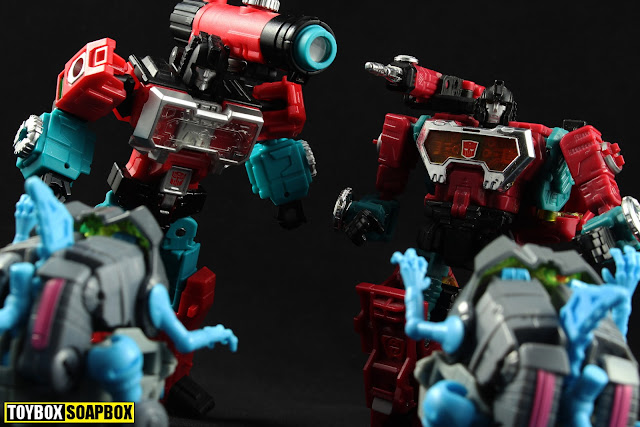 Articulation on Perceptor isn’t stellar but it’s a reasonable fit for the character. He doesn’t need hyper articulation, wrist swivels, ankle pivots or whatever else, so it doesn’t actually feel lacking to me.

That doesn’t mean their isn’t some stuff that couldn’t be improved. The shoulder hinges that allow for transformation don’t lock in and any movement tends to move them when you don’t want to. Convex’s  head acts as Perceptor’s neck, as is standard for this line, but an IDW style sniper rifle is packaged in with the figure. As he can’t wield it as a sniper would, it does expose the limitations of the Titan Master system but the counter to that is that we are talking about a deluxe toy so neck articulation isn’t something you expect to be great (I have used Blu Tak in some of the pics, just in case you were wondering).

But if you happen to have a magic lamp, rub the heck out of it and ask the Genie to sort this out.

This figure isn’t going to win any awards for articulation but in hand it’s a toy that just makes sense and does everything just right and with no fuss – it’s found it’s sweet spot. When buying a deluxe I am not looking to be blown away. I want a figure I can pick up off the desk and transform whilst watching endless episodes of Magnum PI on the tele and Perceptor is perfect fodder for that.

Titans Return has made it’s name in giving us great updates to classic characters that skew closer to their G1 counterparts than Generations is usually known for and Perceptor is another fine entry into the line. The Headmaster not really going anywhere is a bit sloppy but it’s a trade off I’m willing to make for a G1 style Perceptor.