What a funny old world. Just a couple of years ago Transformers fans were exhausted by the bi-annual deluge of Bumblebee toys that would clog toy shelves across the globe. Oversaturated, overexposed, overloaded – we begged for a break from the horn headed nightmare. Hearing our pleas, Hasbro kept him out of the fan bait Generations toyline, all the time asking themselves – “how do you take a character as overused as Bumblebee and make him as desirable as a COVID vaccine?” Their answer? Buy a car manufacturer license, release him right near Christmas and make him a store exclusive. Far from rolling our eyes, when he was finally revealed the heart of the collective fandom grew three sizes that day.

What followed has been a classic Christmas tale played out against the backdrop of the Covidian era. A familiar desperate rush to stores unprepared for demand has taken place, but instead of punch ups in toy aisles – people have been frantically clicking refresh on the websites of toy retailers. Hardly the stuff of a Jingle All The Way sequel is it?

So is it worth asking Santa to help you out, and put one under your Christmas tree? Scroll down to find out. 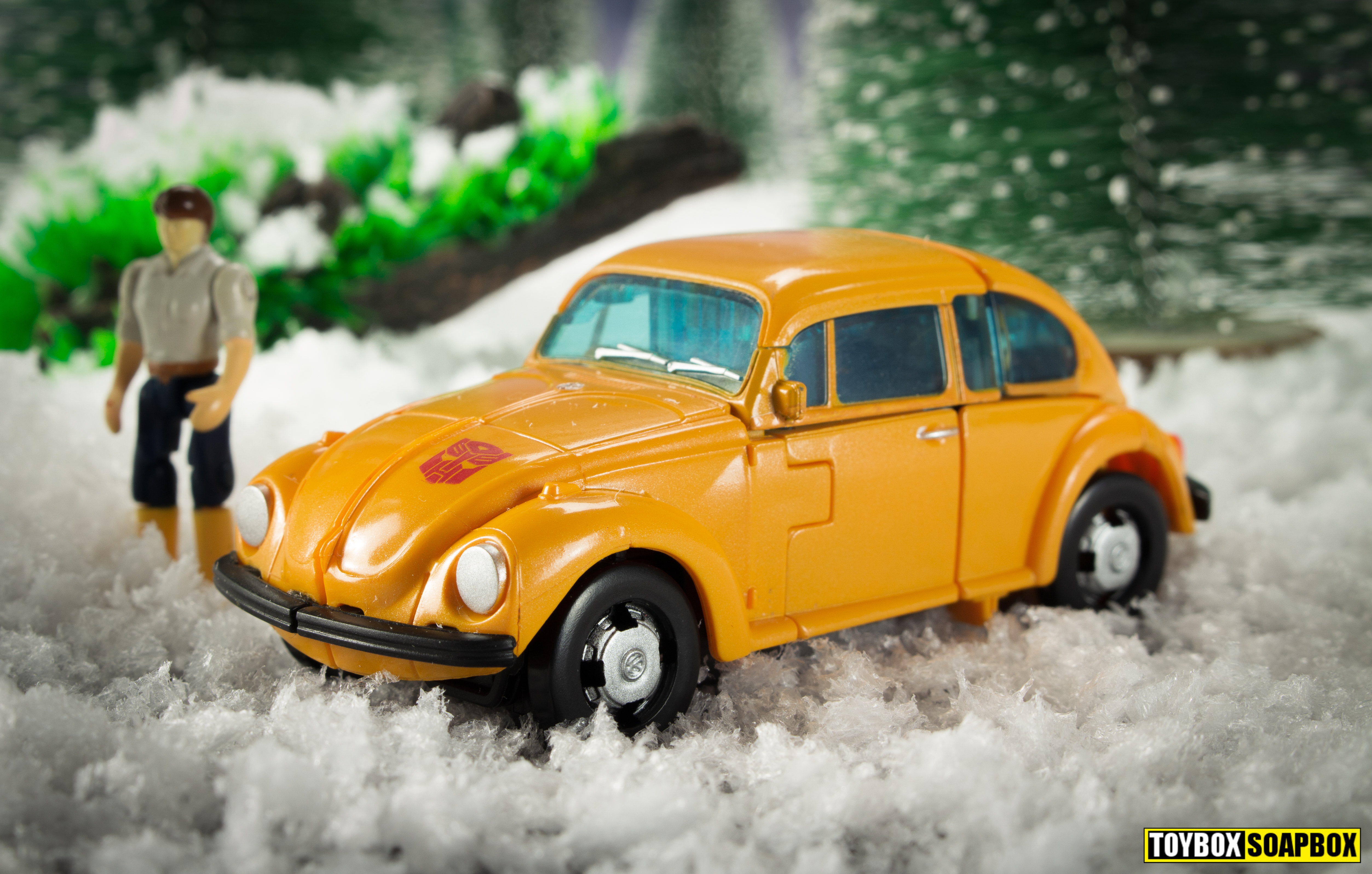 Frustrations with distribution aside, it’s lovely to see Generations get what I believe is its first licensed vehicle. No doubt someone will be desperate to tell me if that’s incorrect, but off the top of my head I can’t think of anything that’s beaten Bumblebee’s Volkswagen Beetle automobile to the punch. Generations tends to mash up various real-world cars so that if you squint they resemble an actual vehicle, but the difference is enough to avoid a copyright claim winging its way in the post. The reality of this alt mode is so stark it makes it stand out. You don’t realise how conditioned you are to seeing peg holes and bits of robot bent to resemble a rear until they aren’t there. There’s a feeling of it being as much a scale model as a toy. 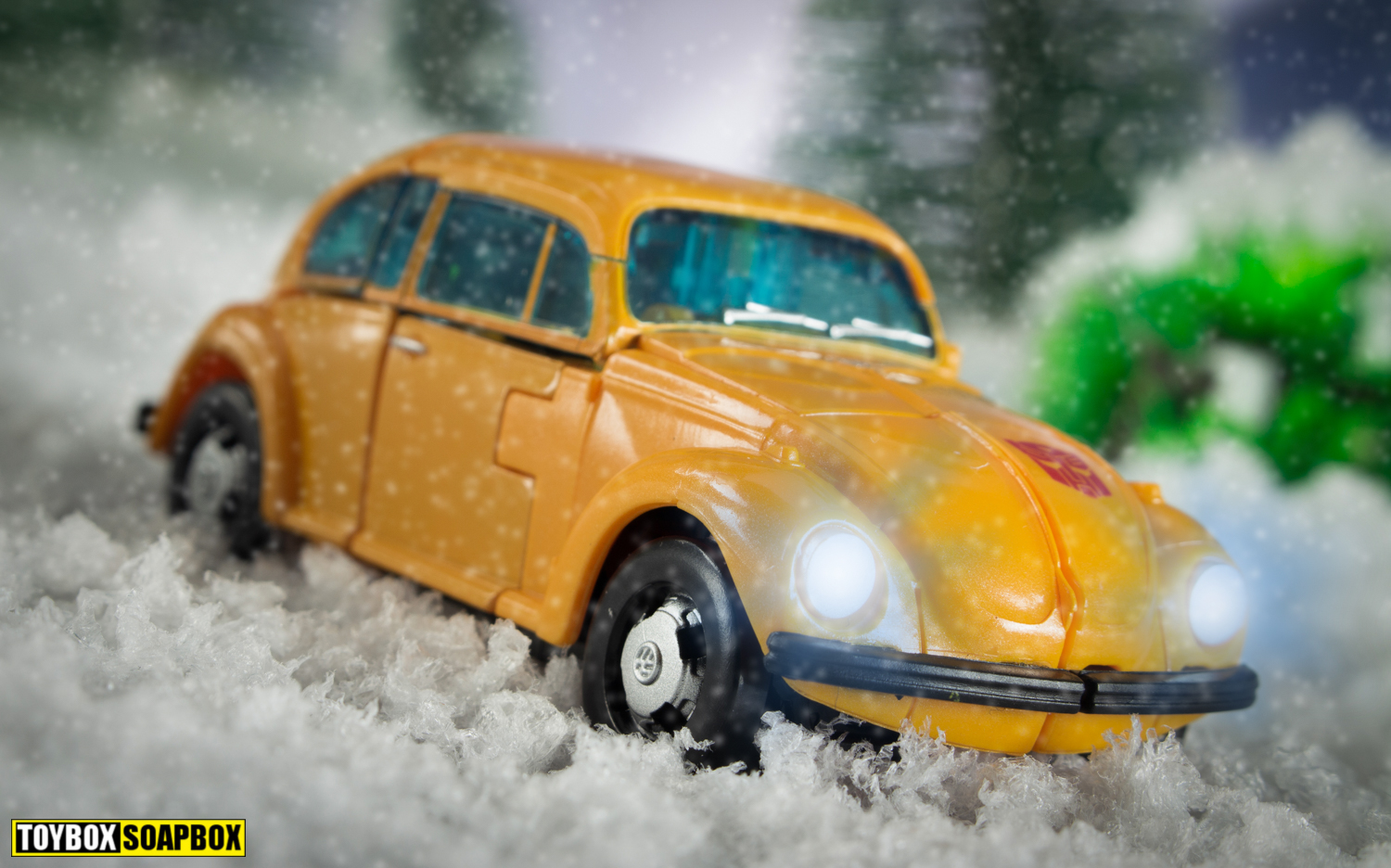 Splashing out on a licence means Hasbro spared no expense in recreating a Volkswagen Beetle. The proportions are exact, the VW logo is emblazoned all over the body and it sort of resembles a loaf of bread on wheels. People will say “it looks like the Masterpiece”, which is true, but that’s because they are supposed to look like the same car. A few flourishes do help sell that illusion though, such as the single wing mirror, window wipers and the bumpers being separate pieces. It’s strange because on one hand this is a normal car amongst a sea of sports cars and jet fighters – but it’s adherence to reality makes it stand out. 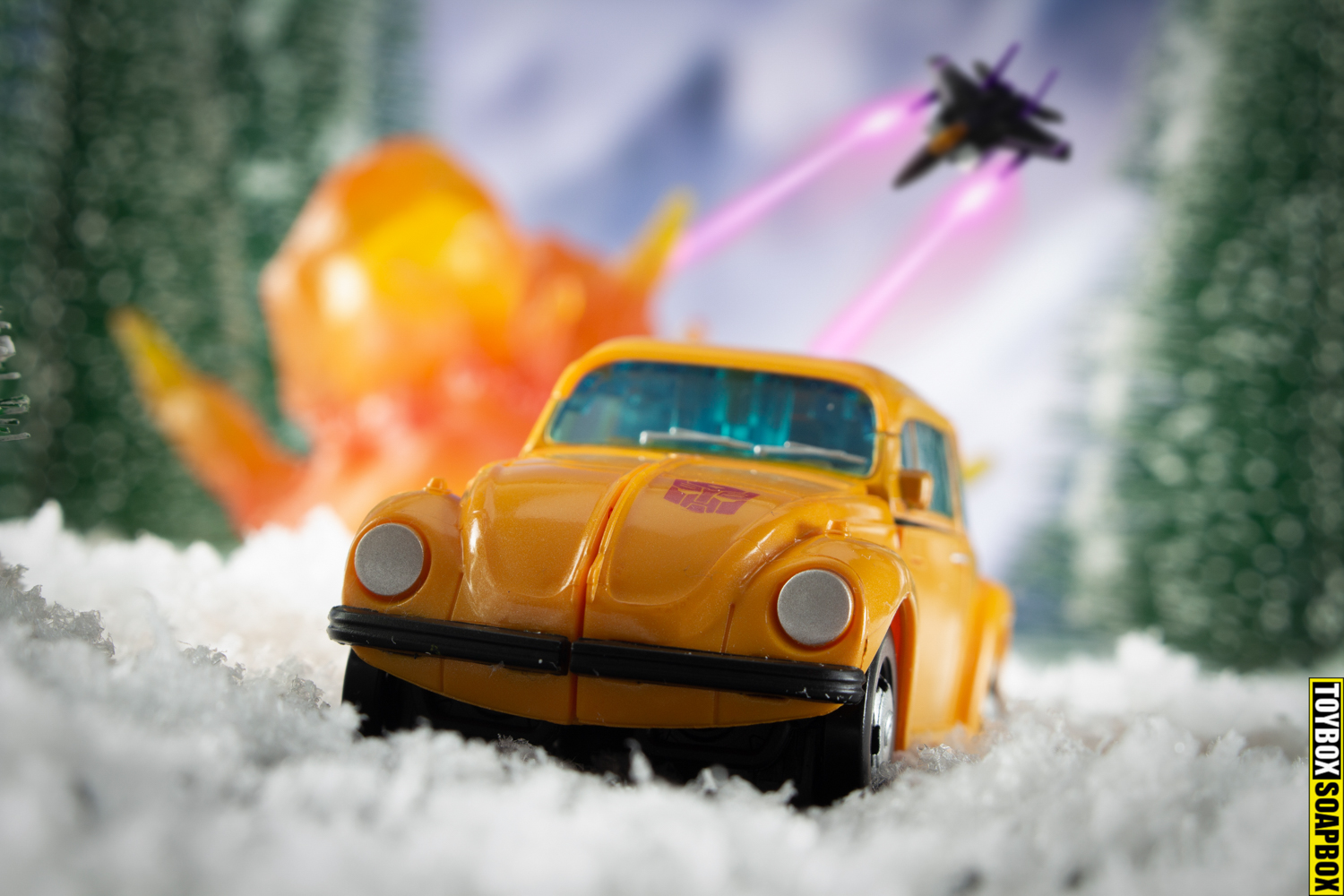 Hasbro has followed Takara’s snowy Masterpiece scale footprints by making Bumblebee a shade of yellow that leans into orange. So much so that if you hold him in your hand doctors believe it provides your daily dose of vitamin C. Perhaps this is cartoon related or maybe as well as paying Volkwagen for a licence they also contacted Tropicana. Someone has also done a great job at colour matching as the areas that are painted yellow blend well with the yellow plastic – a fate that wasn’t so kind to poor Sunstreaker. On one final paint related note, there are loads of details picked out that you wouldn’t usually expect on a mainline figure. For example not only does he feature painted head and taillights, but the windscreen wipers AND door handles get the same treatment. Whichever Scrooge is responsible for the paint budget at Hasbro must have been visited by three ghosts the night before this toy went into production. 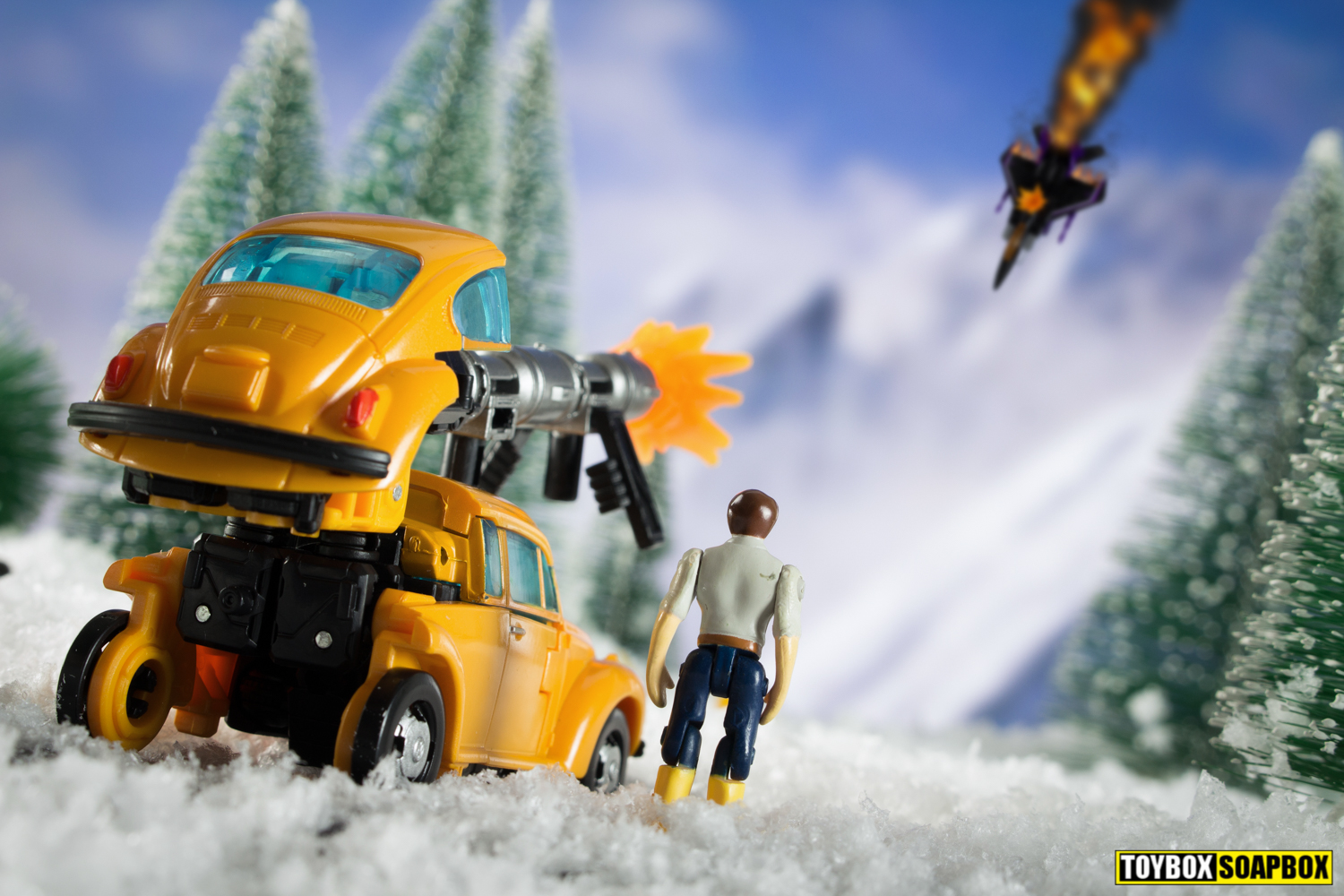 As with all spawn of Cliffjumper, Bumblebee gets that same bazooka that CJ borrowed from Rambo’s shed. We’ve seen it 4 times now and Hasbro jabe realised they needed to do something different with it, beyond “it’s those water ski’s from that one episode of the cartoon” schtick and fan moded it INTO A TANK. You can still disassemble it and use it in its original function if you wish (and that would have made for more sense in a picture gallery involving snow) but this is a fun little extra. 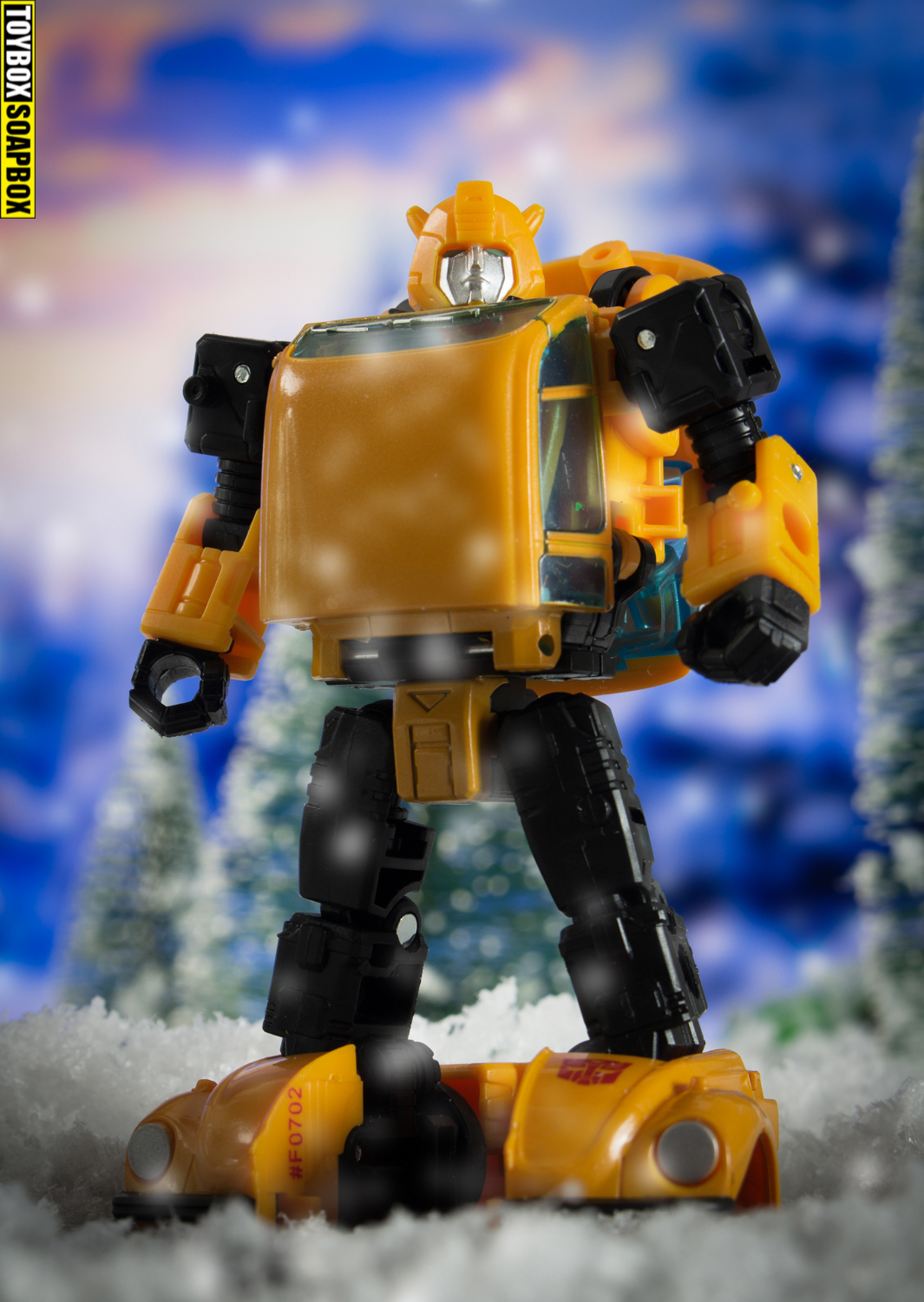 The phrase “Mini Masterpiece” has become commonplace as a way of describing mainline toys that look like their Masterpiece counterparts and often times that’s a just case of visual similarities that are signature elements of a character’s appearance. If two toys take their inspiration from the same source then they are going to look pretty much the same. However, in Bumblebee’s case the transformation also borrows heavily from Takara’s toy. From the first glimpse of Earthrise Cliffjumper, you could see its roots in that MP Bumblebee DNA and this isn’t a surprise with Hasui’s influence on the Generations line. Bumblebee is probably the peak example of those ideals crossing over as it’s rare two toys from these lines feel like reflections of one another.

But wait. My Elves (see: the dog) have reminded me that there is one aspect that runs contrary to what Masterpiece stands for. That being the requirement to remove the rear end of the vehicle for transformation. Normally at this point, I’d deliver some spiel about how it’s ultimately a kids toy, but as it’s Christmas – I’ll give you this one. 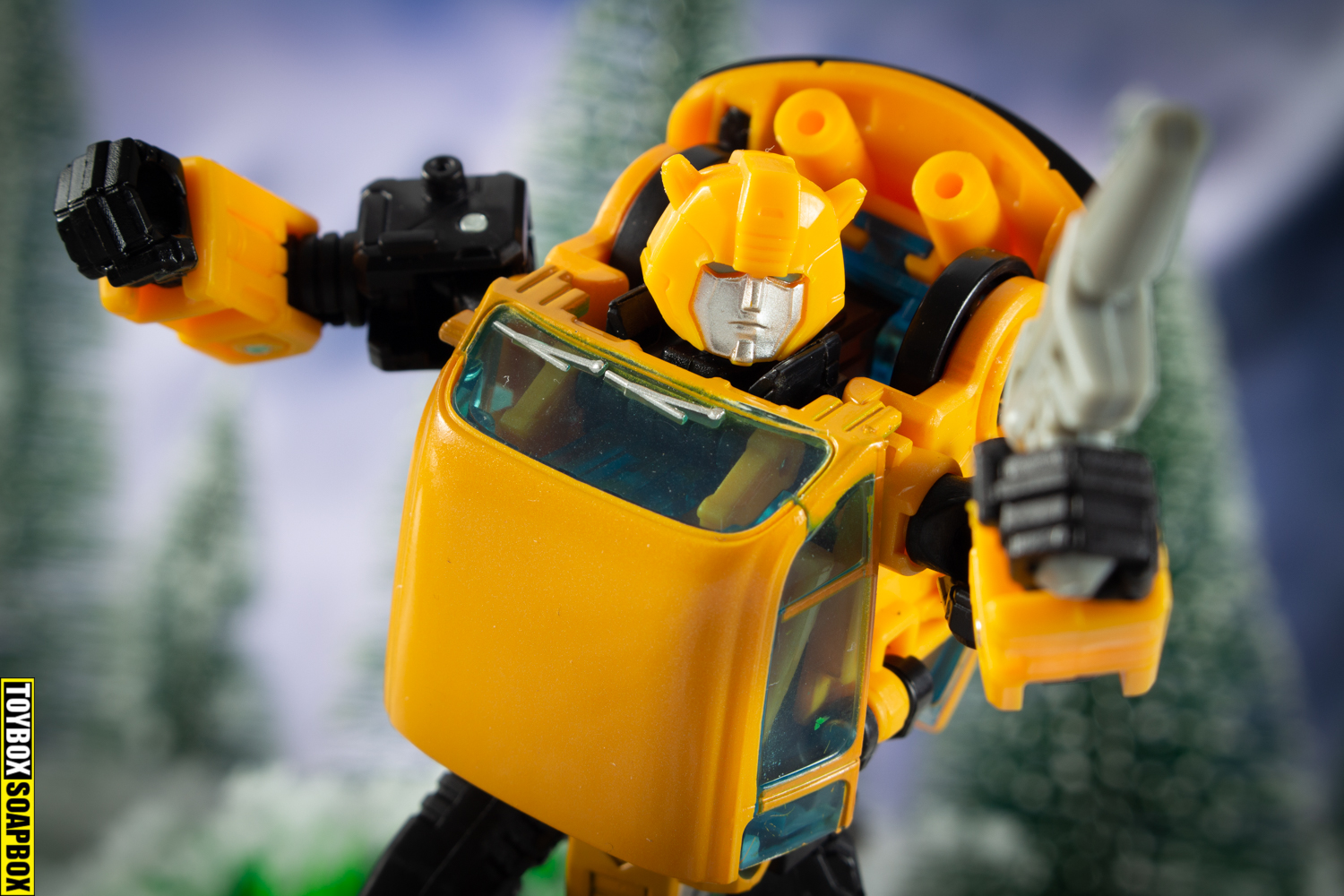 Netflix branding is all over the box like acne on a teenager, but this toy isn’t based on the “Siege” animation model. Considering Rooster Teeth used the Hasbro CAD designs from the toys to build their character models this strikes me as odd and this just doesn’t feel like that Bumblebee. The proportions are different but it’s the head that invokes the warm, friendly best friend to pet humans we all know and love rather than the emo edgelord from Siege. You could easily imagine this Bumblebee needing a child to rescue him from Unicron, whereas the Siege guy you think would probably just steal his batteries. 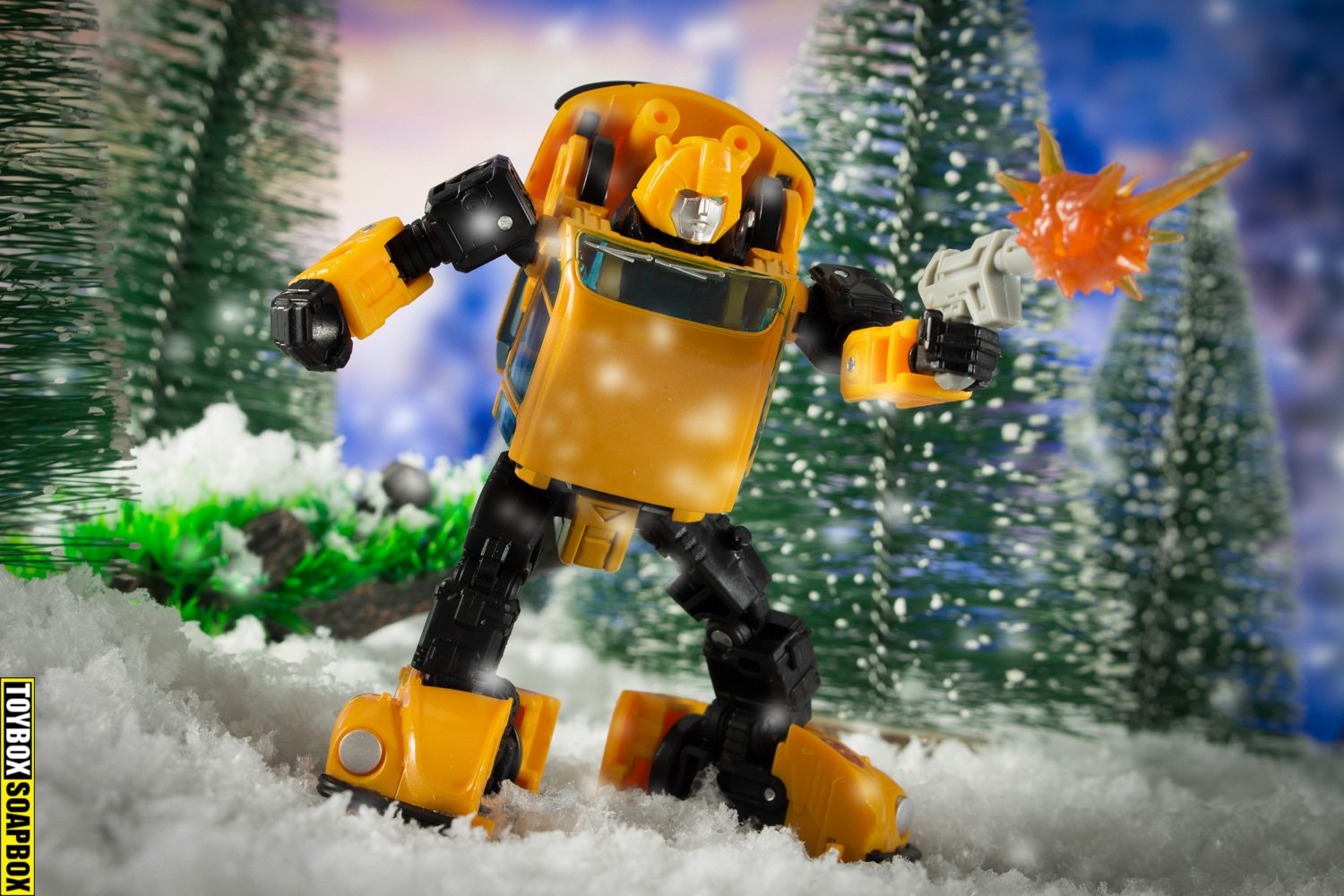 This toy begs comparisons to the Masterpiece toy and there are certainly enough of them to fill your FunFax, but that’s not the only figure being referenced here. Behind his head sits two of the car wheels in what feels like a homage to the 2006 (how has it been that long?!) Classics toy, putting the “C” in CHUG as it set the stage for what would become our beloved, all-encompassing Generations toyline. Often we complain that a toy is working too hard to look like one particular thing, but what we have here is a perfected “ideal” of Generation One Bumblebee rather than slavish recreation of a particular design. 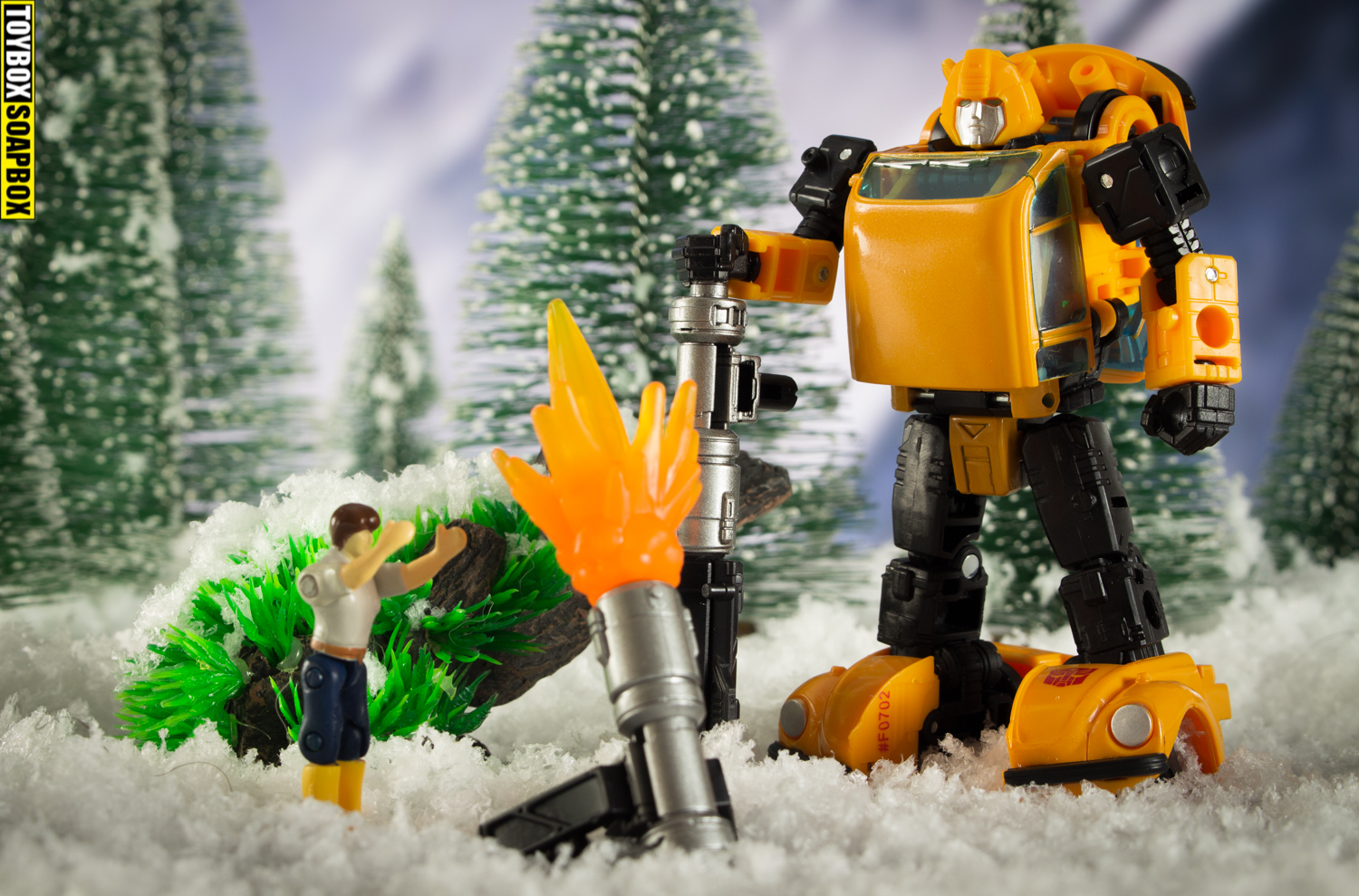 One disappointing characteristic that does leap from screen to toy is the lack of an Autobot badge on his chest. Cliffjumper and Hubcap also suffered from this affliction, but Bumblebee feels so much like Hasbro’s attempt at crafting the perfect ideal of a character that its omission is as glaring. A rub-sign would have filled the void and complemented the Autobrand on his foot, and the only way that would probably happen is if we sent Geldof down to Hasbro’s offices with a new Band Aid single.

“And in our world of plenty, we can spread a smile of joy, but Hasbro can’t be arsed to use – an old run sign.”

Accessory wise he comes with a bazooka that can be disassembled into dual wieldable guns, and should he need it then his back can act as a shield…or a sledge. It’s better as a sledge. 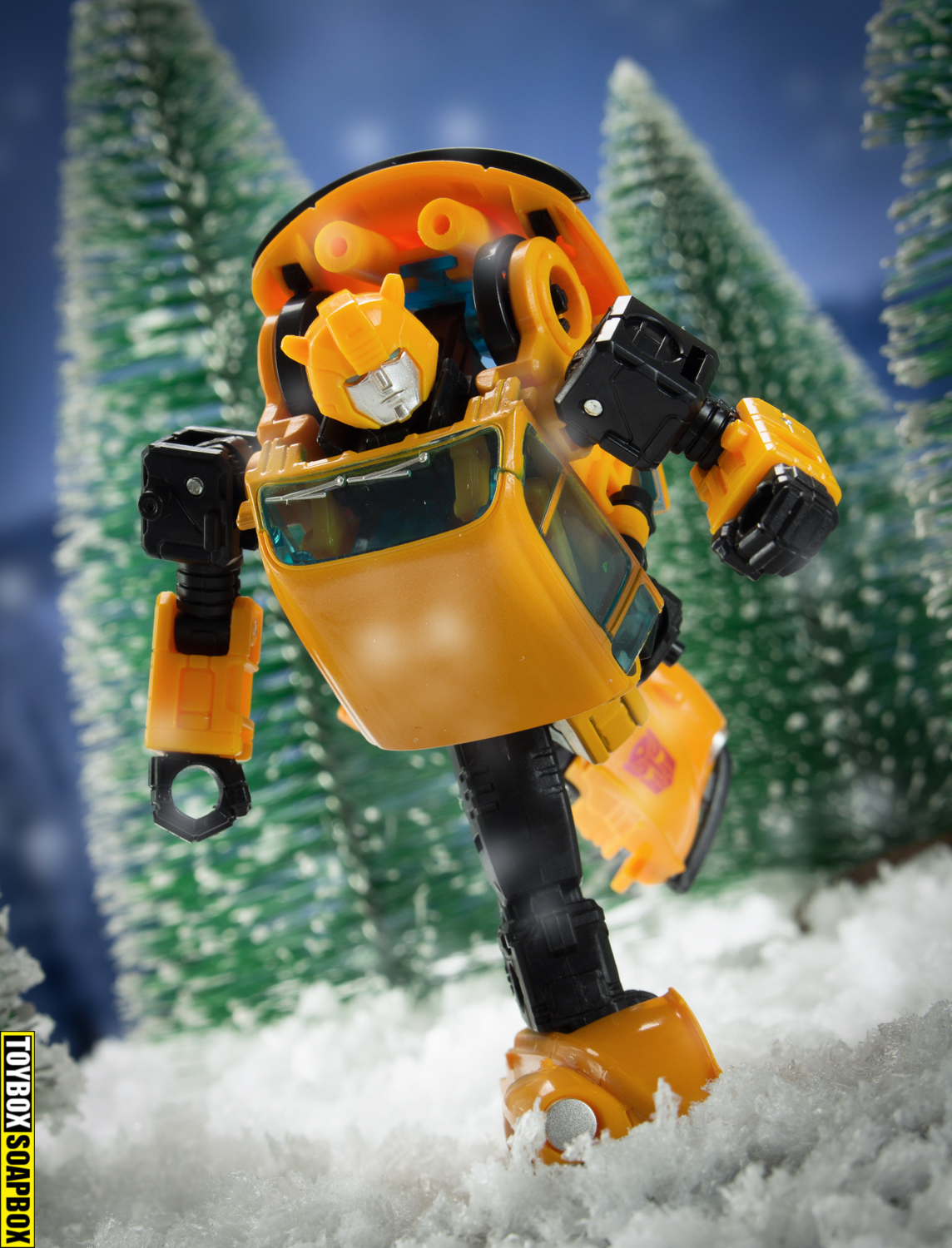 If you own Earthrise Cliffjumper then you know what to expect from the articulation. If you don’t then he has joints and swivels where he needs them. Arms and legs move while elbows and knees bend. Due to the transformation, he can even lean back above the waist to watch the skies for Santa. Unfortunately, those fat, Quality Street chewing cheeks limit the ball-jointed head from anything more than a very slight quizzical Dilophosaurus tilt. 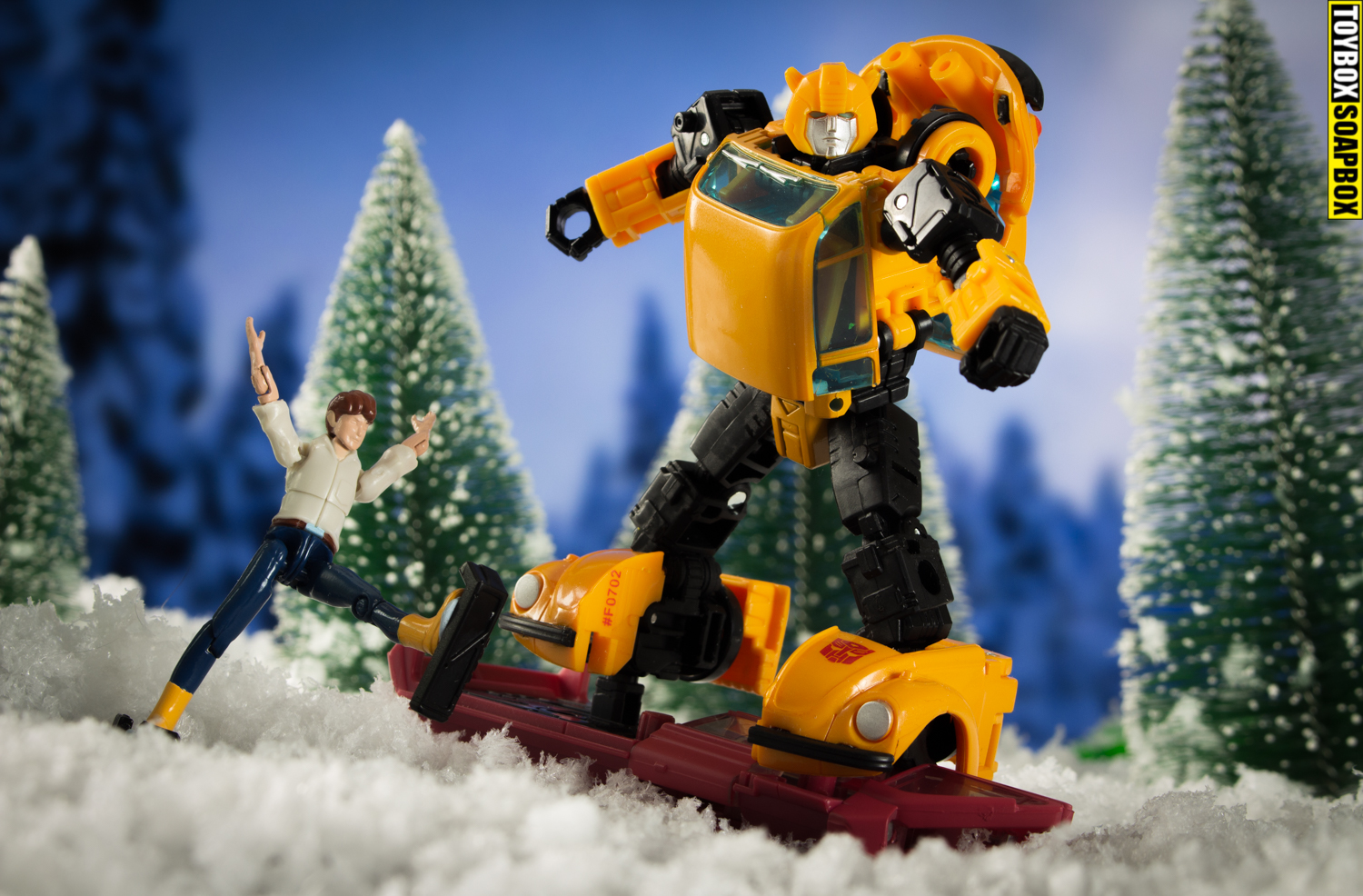 Not only is this a toy – it’s also a toy that tells a story. Earthrise Bumblebee is a celebration of the road travelled from G1, through Classics and Masterpiece to where we are now. The details on the toy are like points on a map charting its journey through the years. There’s also a hint that they know there’s a section of fans that don’t like the cutlery drawer designs from the live-action movies, so the overwhelming power of nostalgia that this toy is imbued with is a concession to them. As a fan of a certain age, The Transformers brand seems like it’s at a peak with the way it’s found a balance that caters to both adults and kids. Paint, detailing, nostalgia and accuracy are all things that appeal to collectors whilst the ease of transformation and the array of gimmicks offer kids something fun to play with. This toy shows a lot of reverence to where this brand came from whilst also showing what it’s achieving in the present. War For Cybertron Trilogy Bumblebee doesn’t feel or look old – he looks about right. 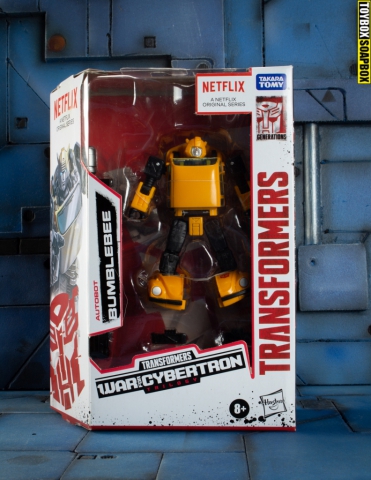 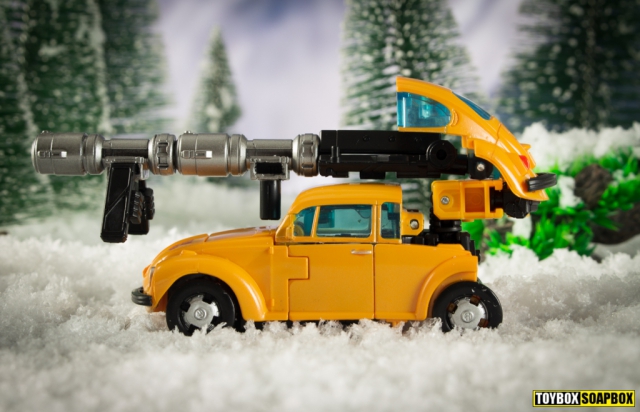 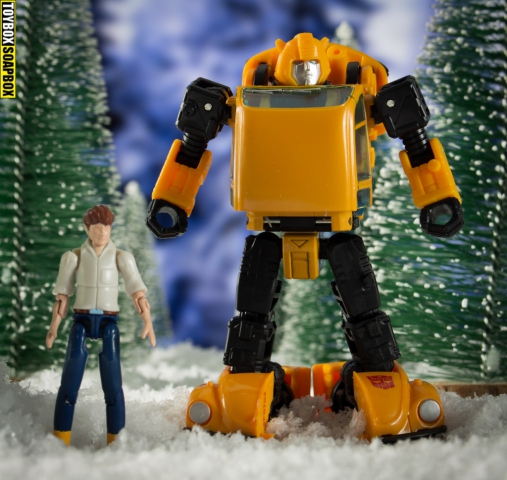 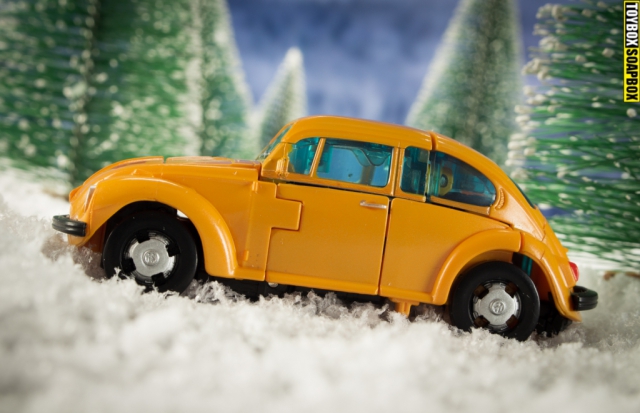 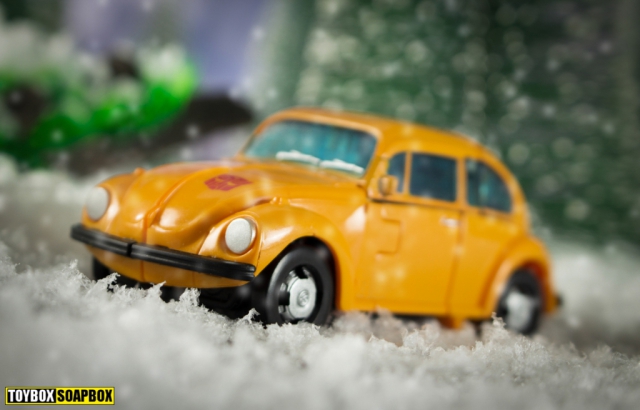 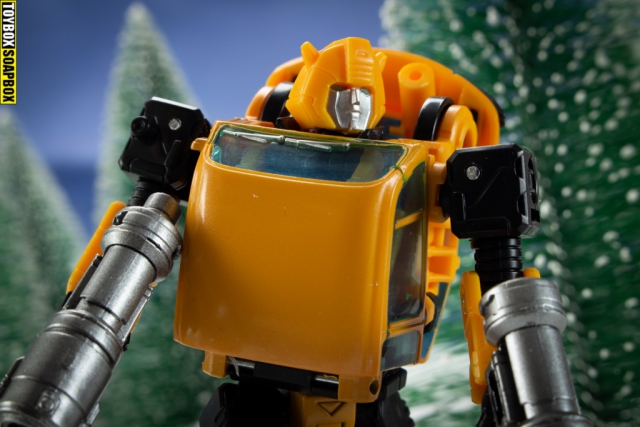