“Listen to the wind blowwww,, watch the sun riseeeeee”….Fleetwood Mac’s The Chain, is an iconic song for many reasons but in my sphere it’s synonymous with one thing specifically – Formula One Motorsport. Here in the UK it was the intro to the BBC’s racing coverage and should you happen to have been passing through the arcades of Skegness during the summers of the late 1980’s, you might have heard a young Toybox Soapbox humming it loudly whilst furiously shoving 20 pence coins into Pole Position or Outrun. Perhaps that’s a reason why I’ve always been drawn to the Stunticons.

All these years later and we are seeing a mini resurgence of the Stunticons in the third-party transforming world, with X-Transbots Berserkars arguably leading the pack. Overheat is the third entry in the series, and is their take on my beloved Dragstrip. My second favourite, after Wildrider, Dragstrip was the only one I ended up owning twice as a kid. Once due to mass pleading with my Grandma circa 1985/6 and the second, much later, via a complaint from my mother to the folks at Weetabix which lead to a glorious day where a huge mystery box appeared, containing many of the gold boxed “Classics” releases such as Tracks, Wheeljack, Motormaster and others – like Dragstrip.

Is Overheat the grown up Dragstrip I’ve been looking for? Find out below. 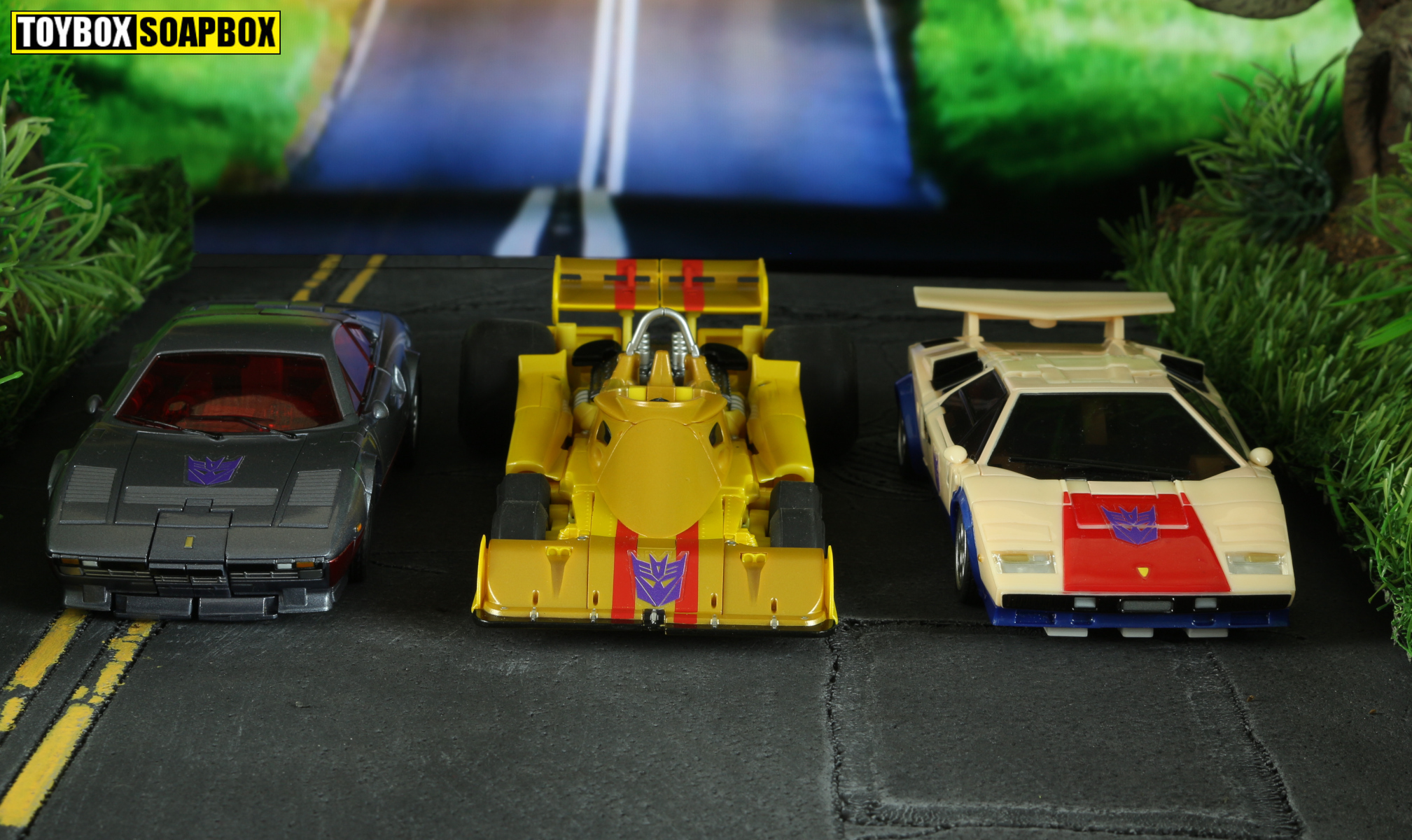 Dragstrip was given the form of what the TFWiki reliably informs me is a Tyrell P34 race car, by Megatron in the original cartoon series. An obscure, dual front wheeled oddity that carries itself with an air of mystery that F1 cars very rarely do. Being a third-party Masterpiece style take on Dragstrip, Overheat follows the standard “slavishly accurate, but not officially licensed” path in producing a lovingly realised replica of the Tyrell that looks good enough to slap onto a Scalextric track. Chunky rubber tyres add to that vibe, being fitted to each wheel as standard (I wonder what deal Kwik-Fit gave them) and letting Overheat freely roll about on any smooth surface, benefiting from a lack of the clearance issues that plague the other members of the group. 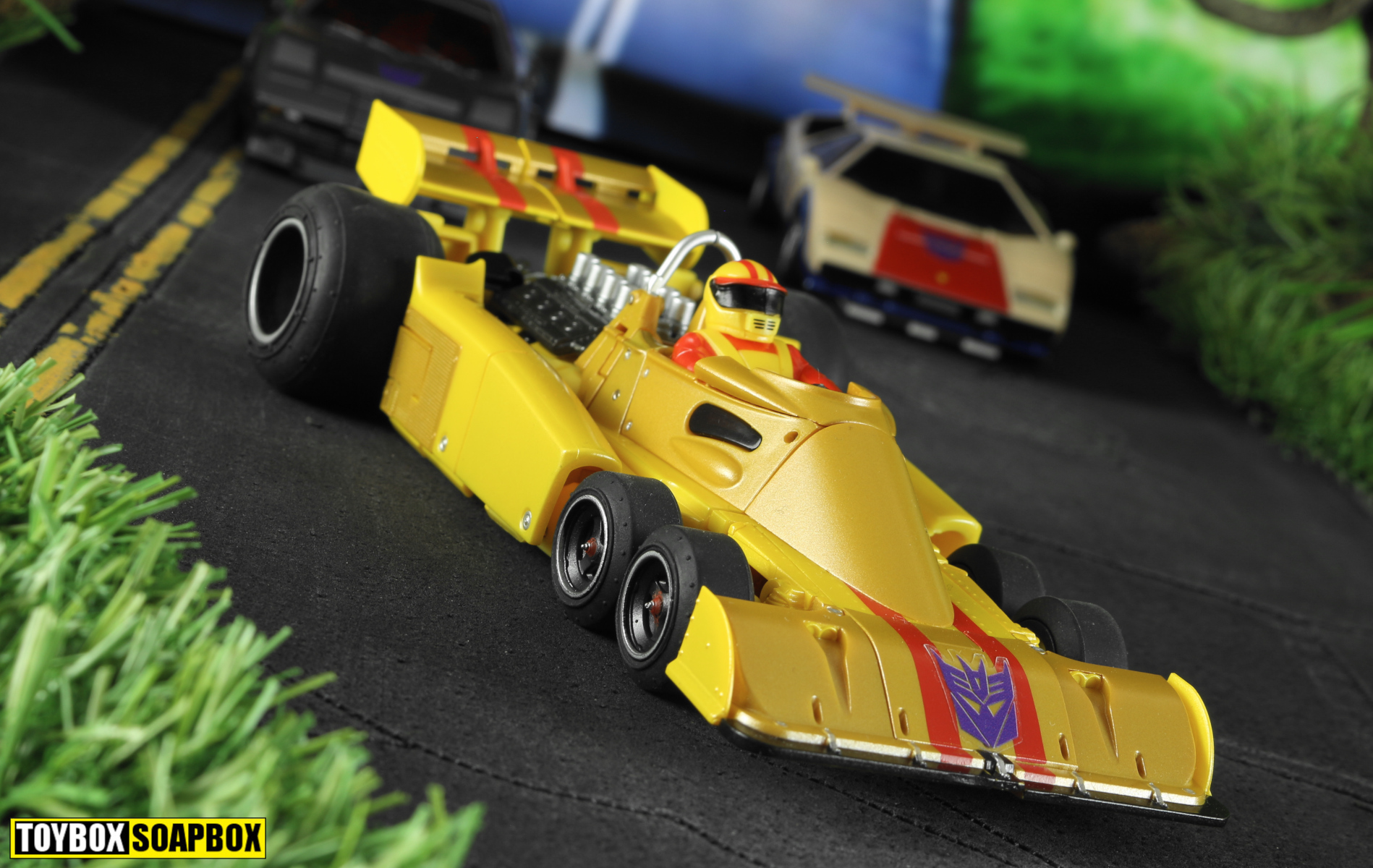 Covering the car with a colour scheme that hugs the cartoon accuracy pillow so tightly means there is little to no room for the colourful livery or sponsor decals that are such signature elements of motorsport. It’s still pretty, but the adherence to the animation model does leave a bit of a bland taste in the mouth that the gold and yellow struggles to wash down. Taking some cues from the vintage toy would have allowed for some red striping down the flanks, but I know Sunbow accuracy is the one badly drawn ring to rule them all at the moment. Hopefully as we speak, the wizards over at Toyhax can hear me mixing a variety of metaphors as they furiously stir their cauldrons of ideas. 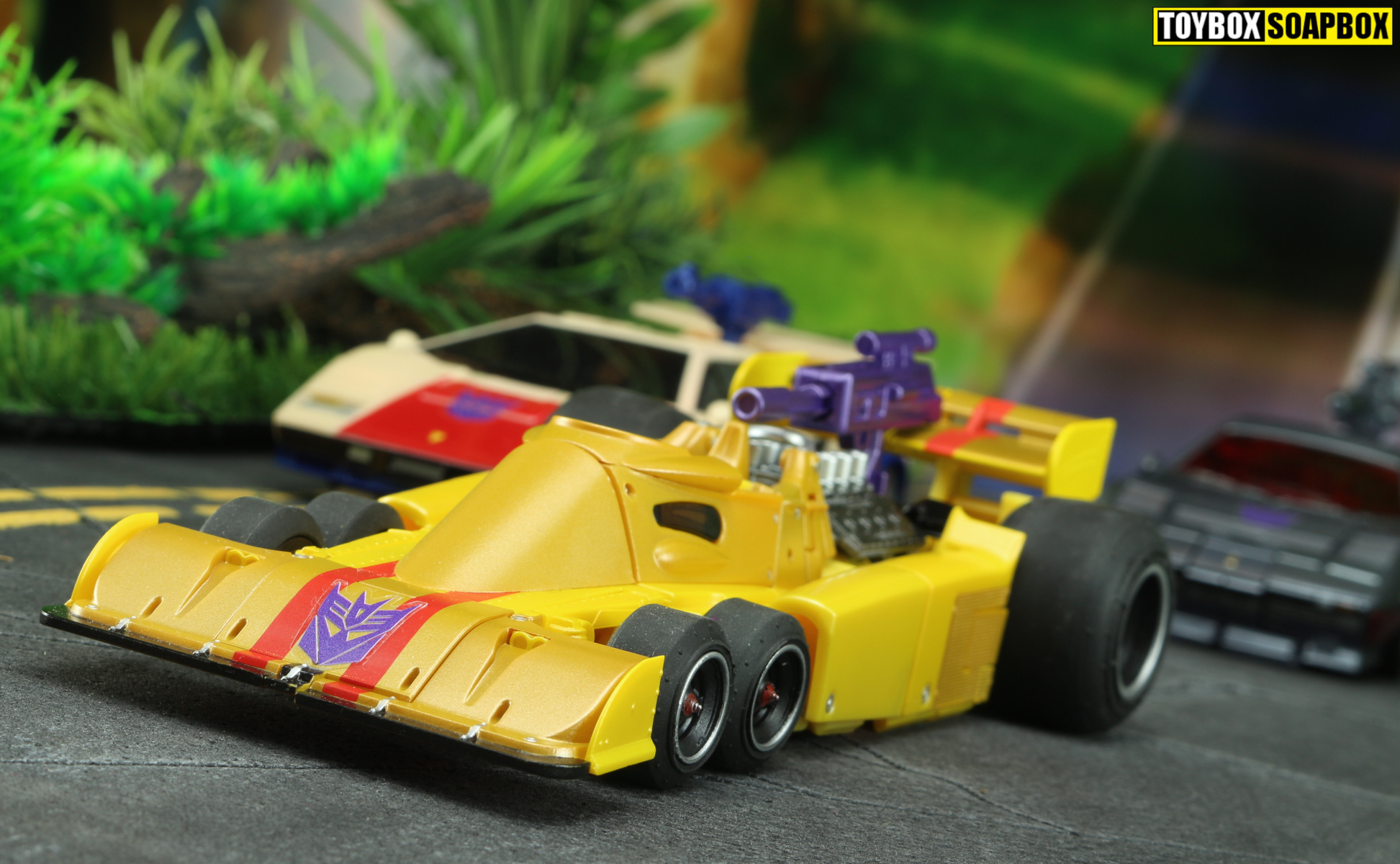 An F1 race car barreling down your local high street would raise a few eyebrows on a good day, but throw in nobody behind the wheel – and you’ve got the recipe for a furious local neighbourhood watch meeting. It’s not very “robots in disguise” is it. X-Transbots have opted to iron out this fictional wrinkle by including a small, paraplegic, driver who looks like a lost member of MASK. For that one guy with their hand up at the back, waiting to ask if Overheat can transform with the driver in situ – the answer is no. He’d be squashed to a very painful pulpy death by the Lego brick shaped engine block. As with all of the Berserkars so far you can plug the pistol into the top of the car to give them that cool Matchbox Roadblasters feel, or shoot the driver in the head. As a bonus, and in a departure from his buddies, Overheat’s pistol can compress and store underneath his car mode should that sort of thing keep you awake at night. 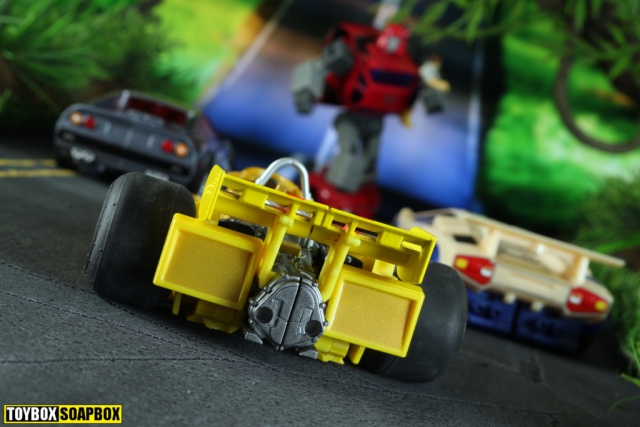 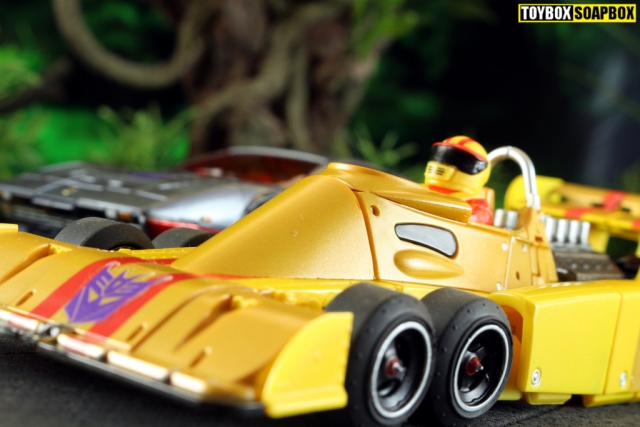 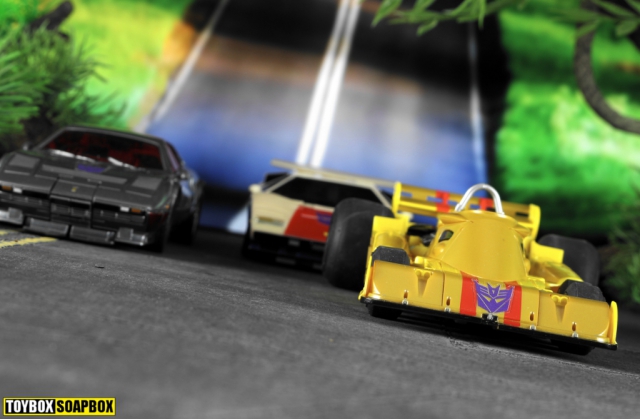 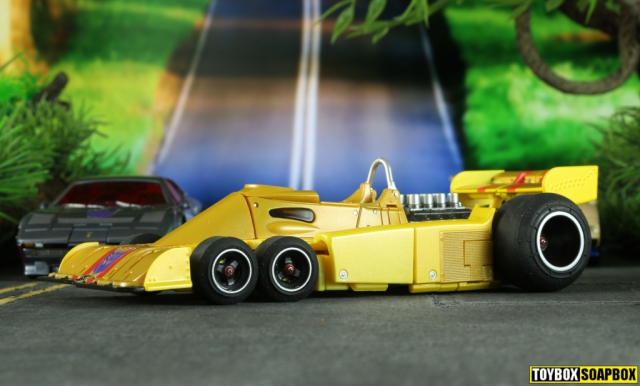 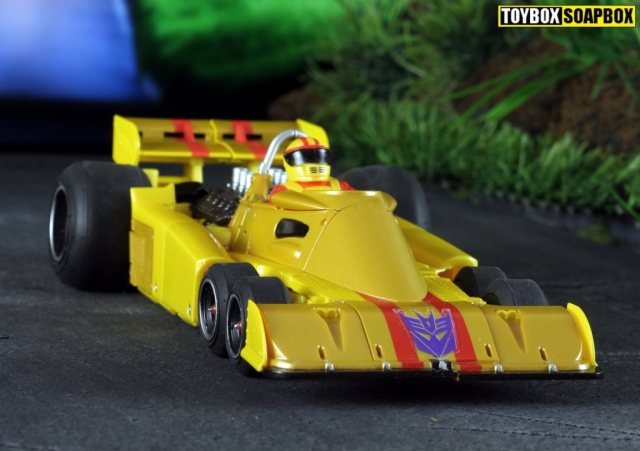 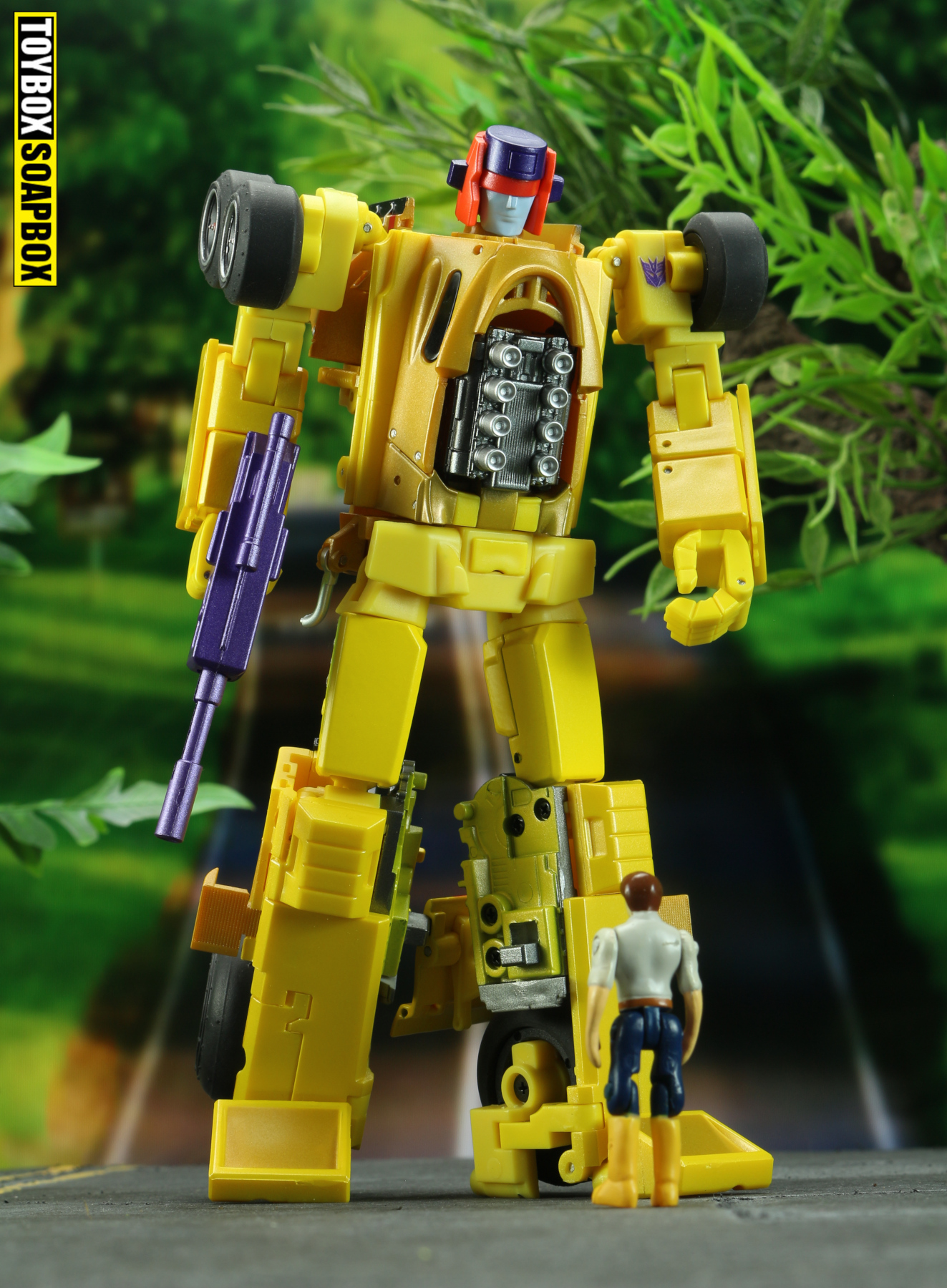 Unlike the other four-wheeled members of this group, Overheat doesn’t have the luxury of a regular car shell to cram himself into which makes for a more intricate transformation than his team mates – but also a more intuitive one. Making clever use of its mass, the toy moves parts around neatly without ever feeling overly convoluted. There are some bits that feel fragile, but that’s a trade-off from having to make a robot from such a sleek car. At no point are you stopped in your tracks and forced to repeat a step over and over again because half a dozen other things are also in flux. However, that does come with the literal cracking caveats of some wonky tolerances. Reports so far suggest that the shoulders can crack due to stress from flipping the shoulder wheels down, and also the front panel can shear off due to minimal clearance. None of these issues have affected me yet, because I got my figure a bit later so was already well aware of what to avoid, and had made my prayers to the toy gods.

I recommend following T-Man’s approach for folding that pesky panel as it’s worked a treat for me. 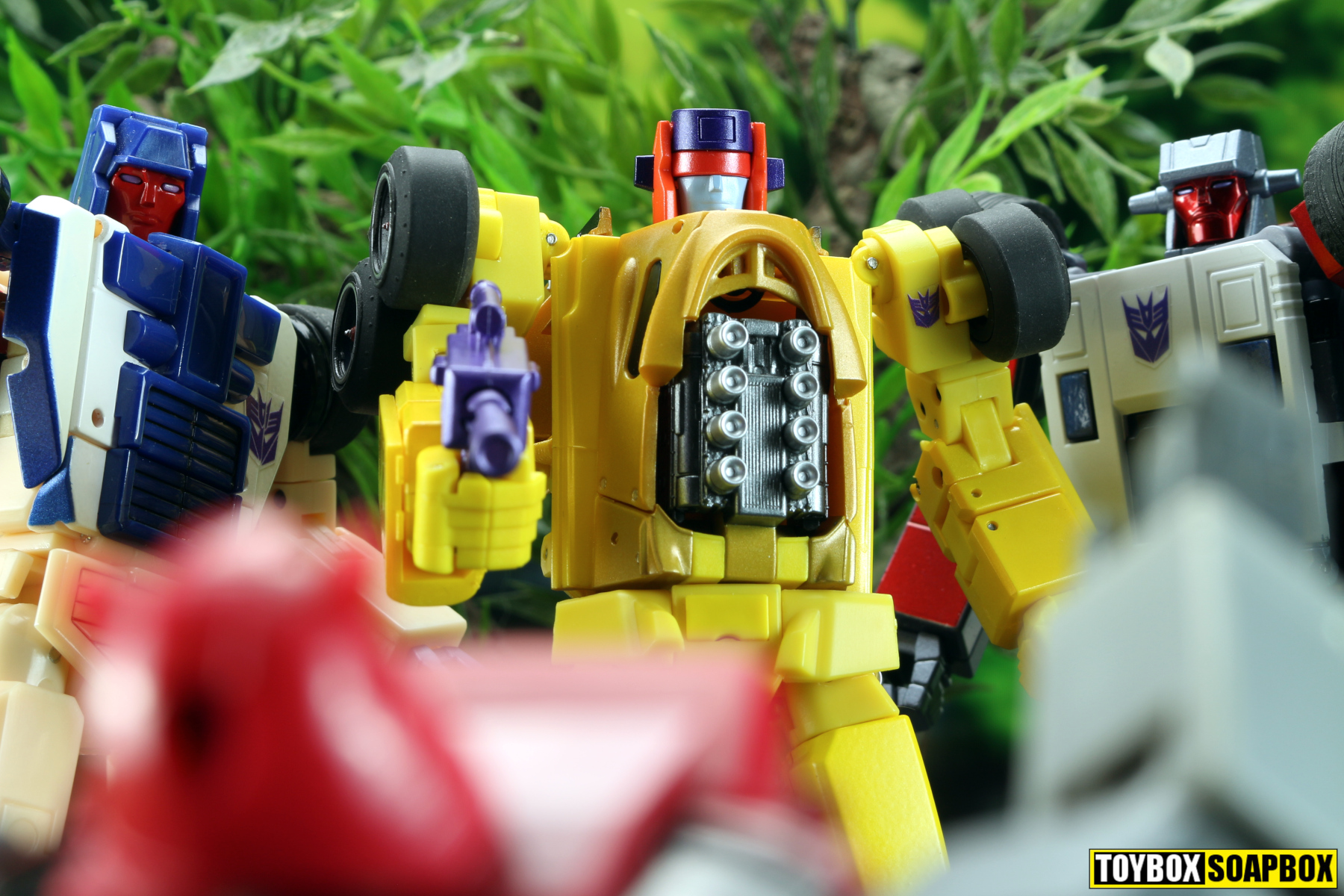 Clear the finish line of the transformation and you are treated to Overheat’s rather wonderful interpretation of the Decepticons finest robotic banana. As a season 2 cast member, Dragstrip’s animation model isn’t an enormous departure from his vintage toy but it’s clear X-Transbots are following the tried and true Masterpiece “real world vehicle mode, cartoon accurate robot mode” template. Overheat bears a very Sunbow noggin atop of his neck, that is gorgeous in all the ways a smirking, half unwrapped Terry’s Chocolate Orange should be. Below that stands a wonderfully cartoony chassis, with the intricacy of the transformation leaving enough panel lines to pull double duty in adding some extra detail and visual cues to stop any thoughts of blandness creeping in.

You are also gifted an extra face in the box (as well as a bonus face for Savant), but alas it is just a different expression and NOT the toy inspired bonce that seems to only live in my dreams. Strangely none of the MP style Stunticons from any third party, include a toy style head, not even as an optional extra. Did The Inquisitor from Red Dwarf judge them unworthy and erase them from history or something? 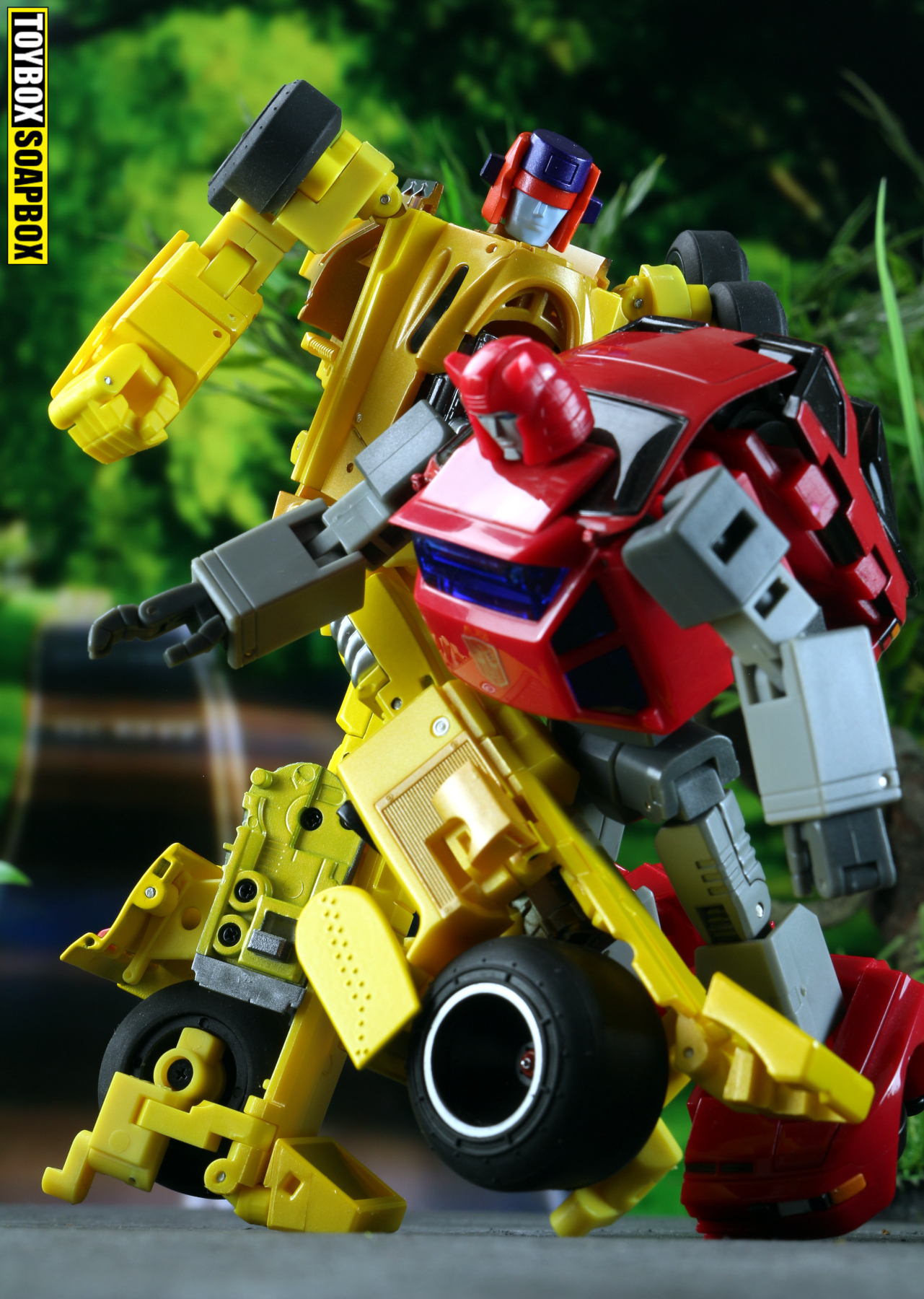 Should you want a more vintage toy look, without the appropriate head, you can leave the shoulder wheels pointed upwards which also helps avoid the pitfall of the masters with cracked shoulders, and doesn’t inhibit articulation in a meaningful way. Articulation is on par with the other Berserkars but actually posing the figure can be a bit more of a faff. His car mode roll cage hangs off his arse getting in the way of certain poses, whilst the feet require you to mess with this odd Resident Evil style crank that acts as the heel to get Overheat to balance in more extreme poses. Nothing is impossible. All possibilities are…errr…possible. It’s just bloody fiddly. 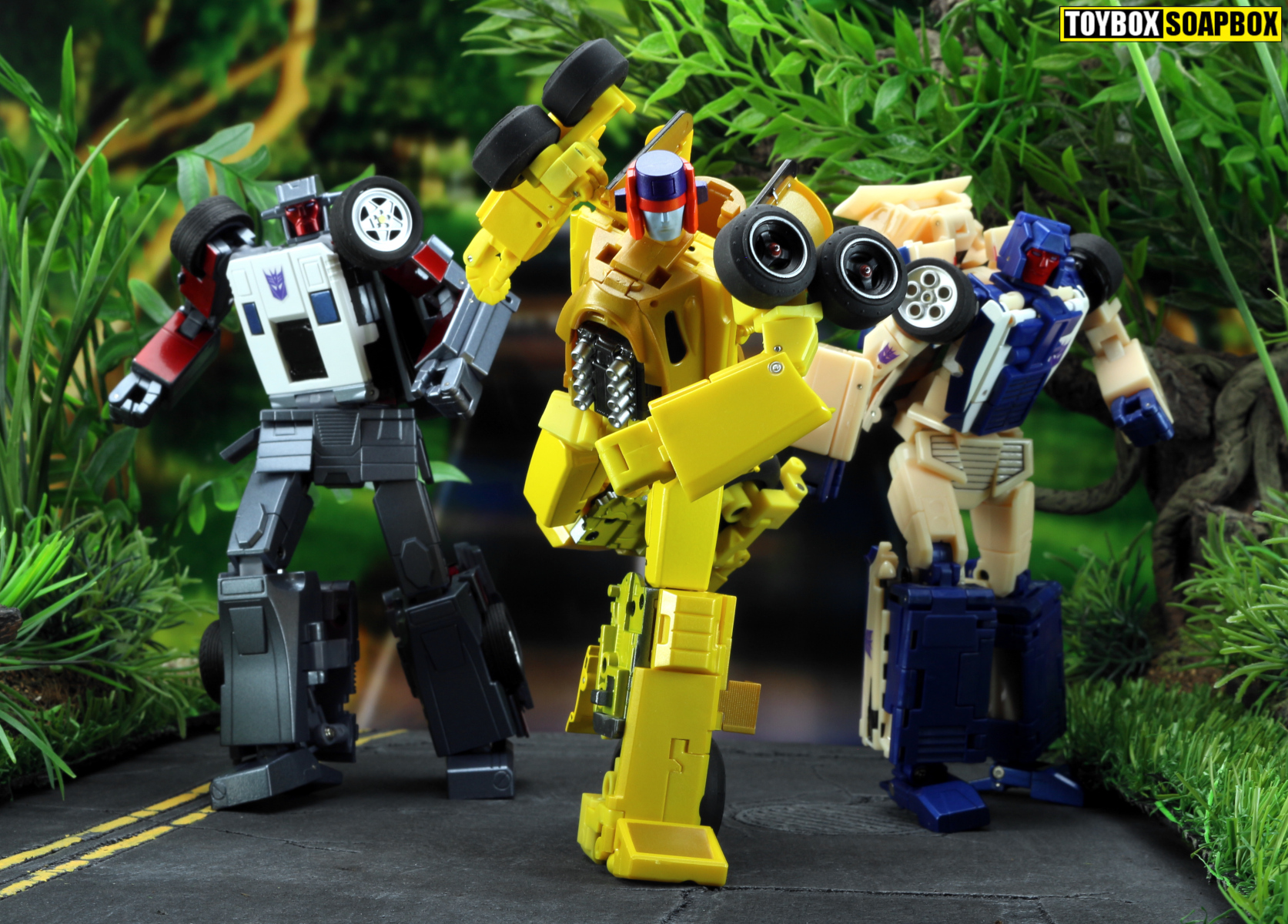 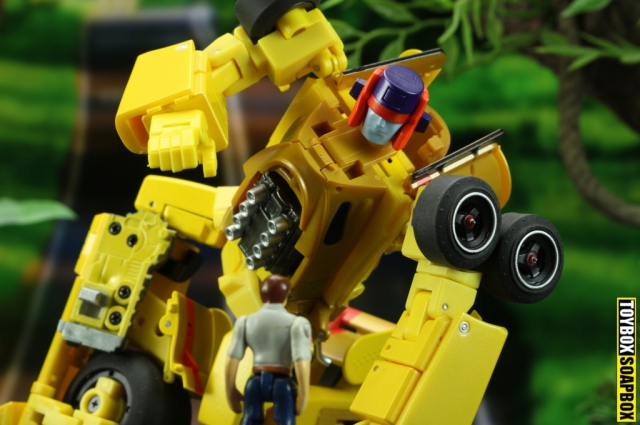 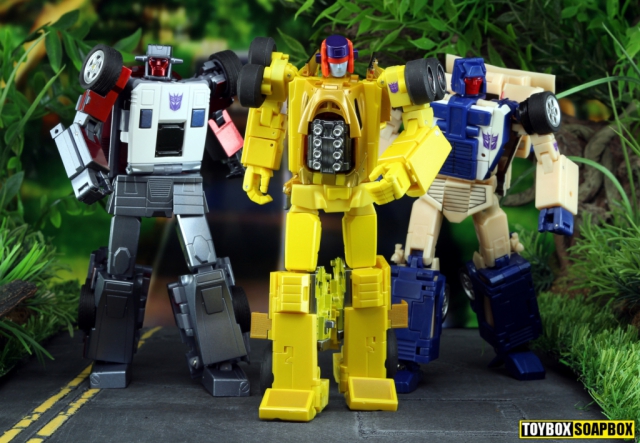 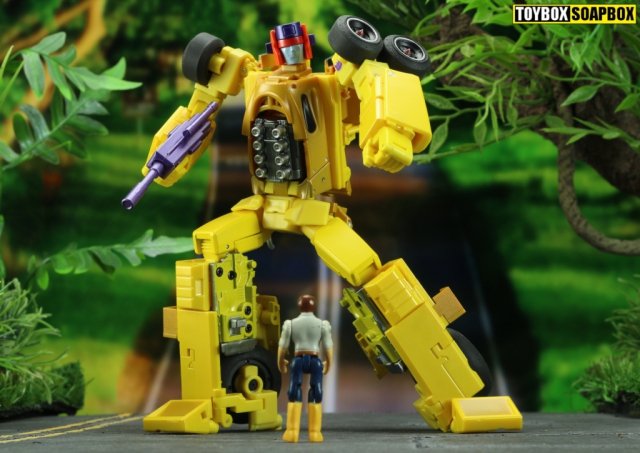 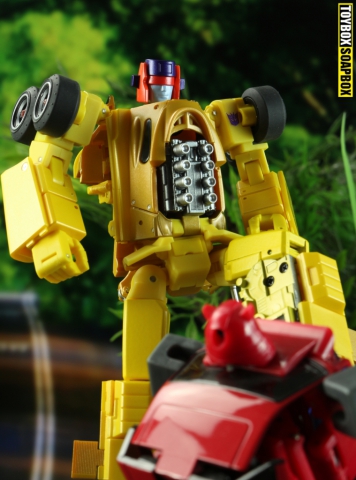 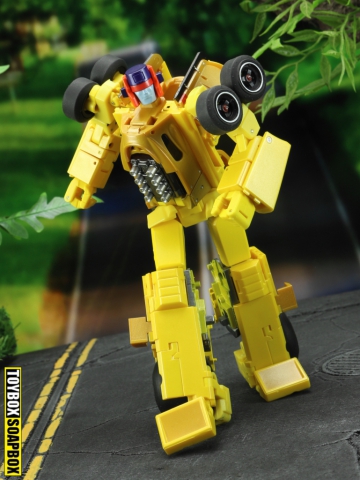 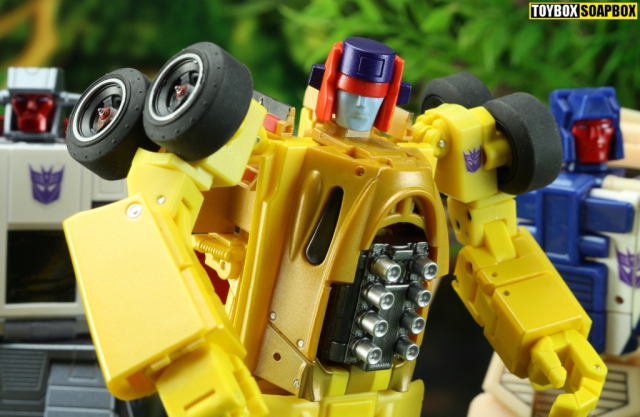 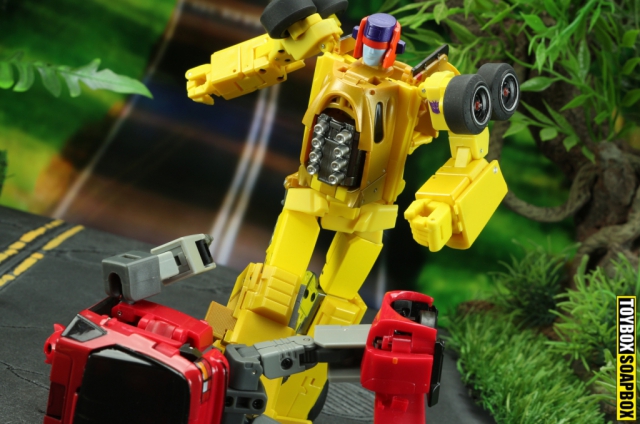 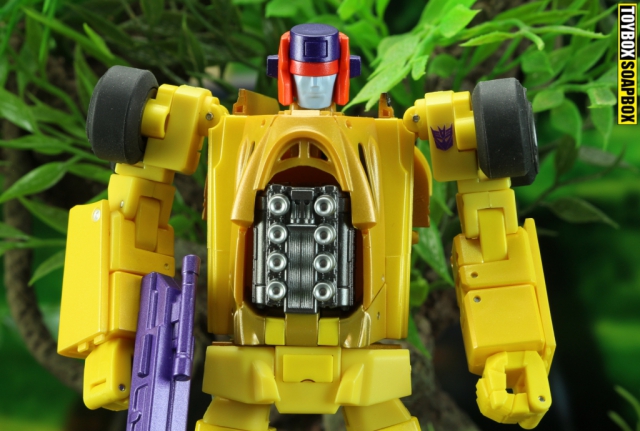 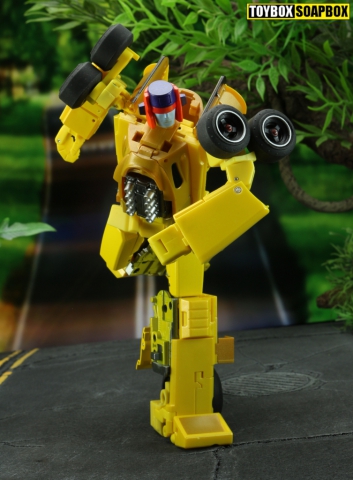 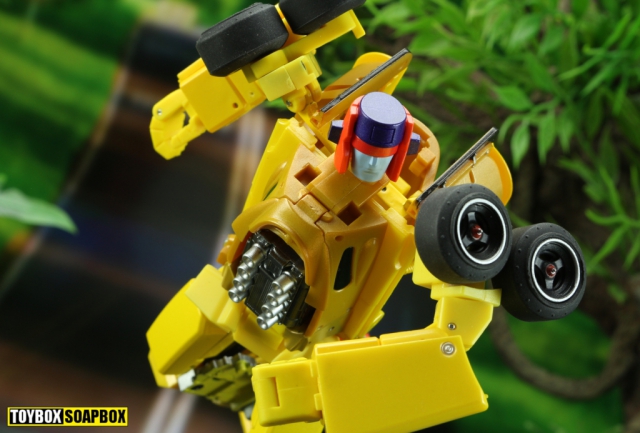 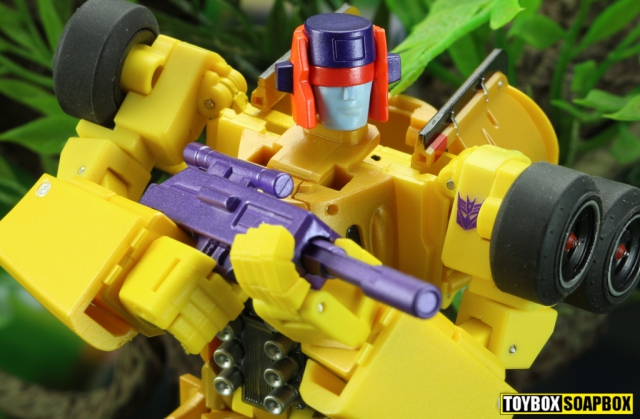 If I was to have one criticism of X-Transbots Berserkars toys as whole it’s a lack of consistency across the group. Some have ratchets in places the others don’t, there is no shared engineering or familiarity amongst the transformations, only Overheat has gun storage that hides the gun and they each feel so different as to seem like they were designed at different times. But they weren’t, and it turns into more of a strength than a criticism, because all too often combiner team limb members are more or less the same toy re-skinned.  XTB have captured the clashing personalities of the Stunticons, with each figure being more concerned with itself than showing any regard for the whole. Overheat’s only concession to a combiner form is a button on his crotch that allows his body to split in half. So yes he is destined to one day be an arm, via an exploding crotch. but he still stands tall as own walking robot banana.