Wave 2 of Hasbro’s Transformers: Siege toy line has had a roll out slower than Andrea Silenzi in the UK, but after much staring jealously at photos online – I have most of it in my hands. Still waiting for Starscream, but that’s an introduction for another week. First from the wave 2 deluxe figures that I managed to grab was Prowl. Everyone’s favourite conceited, manipulative, Autobot security strategist whose attitude suggests a perpetual banana is stuck in his exhaust.

A stalwart of the Transformers franchise, as one of the original 1984 cars, Prowl inevitably reappears in a new form with each refresh of the brand. With the new War For Cybertron Trilogy, he shows his face early as Hasbro hope to answer the question – “what he would look like on Cybertron”? 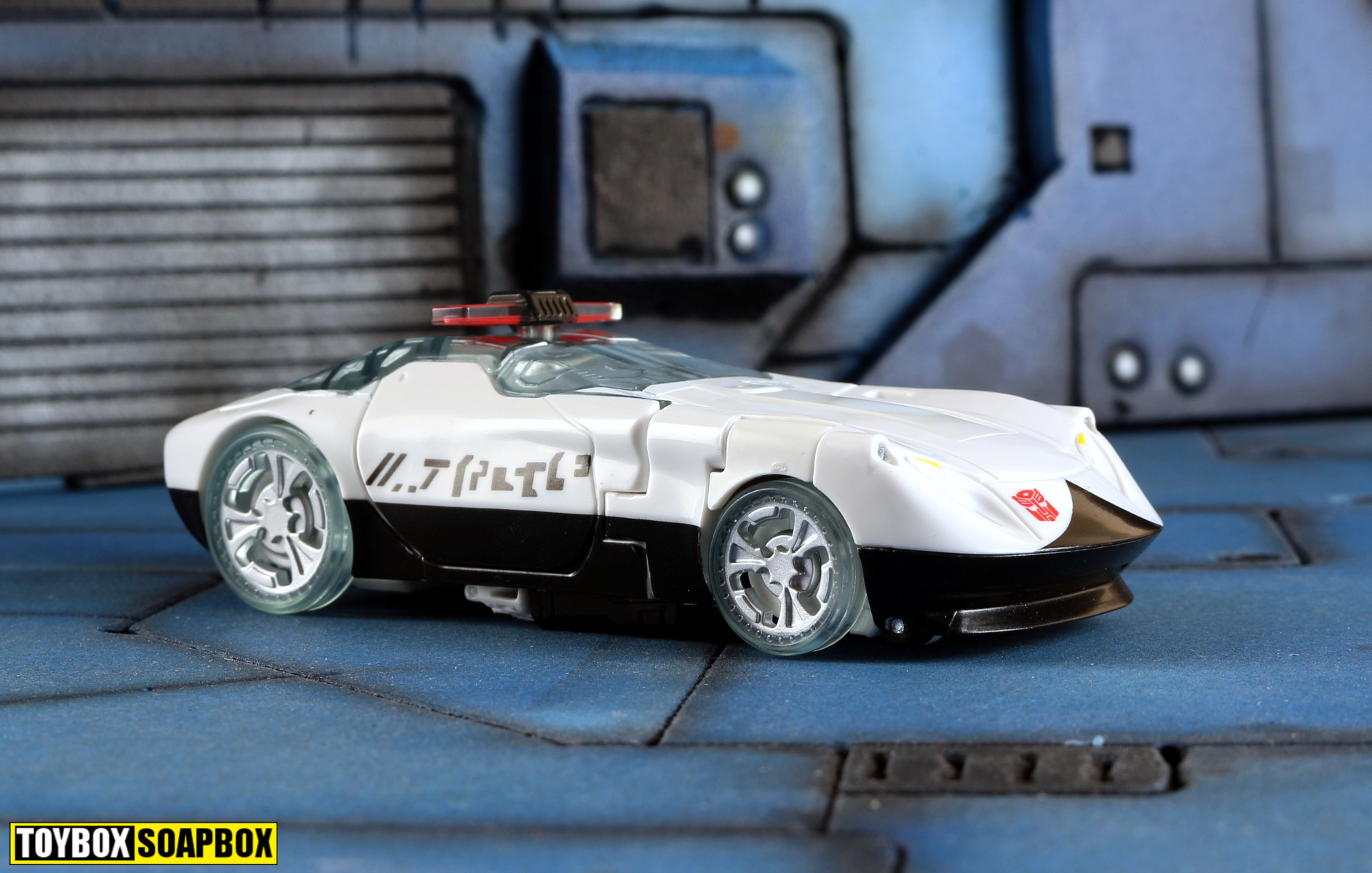 Prowl’s Cybertronian vehicle mode never appeared in the original cartoon or comic, so Siege offers up its own take on what Prowl’s alternate form would look like millions of years ago on Cybertron. Long, sleek and very flat it skips a lot of the more futuristic alternate forms we’ve seen given to Prowl in comics from IDW and Dreamwave, and instead pulls heavily on the 70’s stylings of the Datsun Fairlady Z that Prowl’s original toy was based on. Personally I’d have LOVED them to give that Dreamwave Cybertronian design something better than that old Titanium toy, but we are leaning more towards the cartoon here. So it’s retro future space Datsun. Combining the curves of the Datsun with an otherworldly technological alt mode gives off a very 70’s sci-fi vibe, which is fun and pushes back against the sharper edges we tend to see from 80’s science fiction. Fitting given that even though The Transformers and Diaclone (the line from which the original Transformers toys were borrowed) spring from the 80’s, they are from early enough in that decade that 70’s influences would still be hovering in the air. 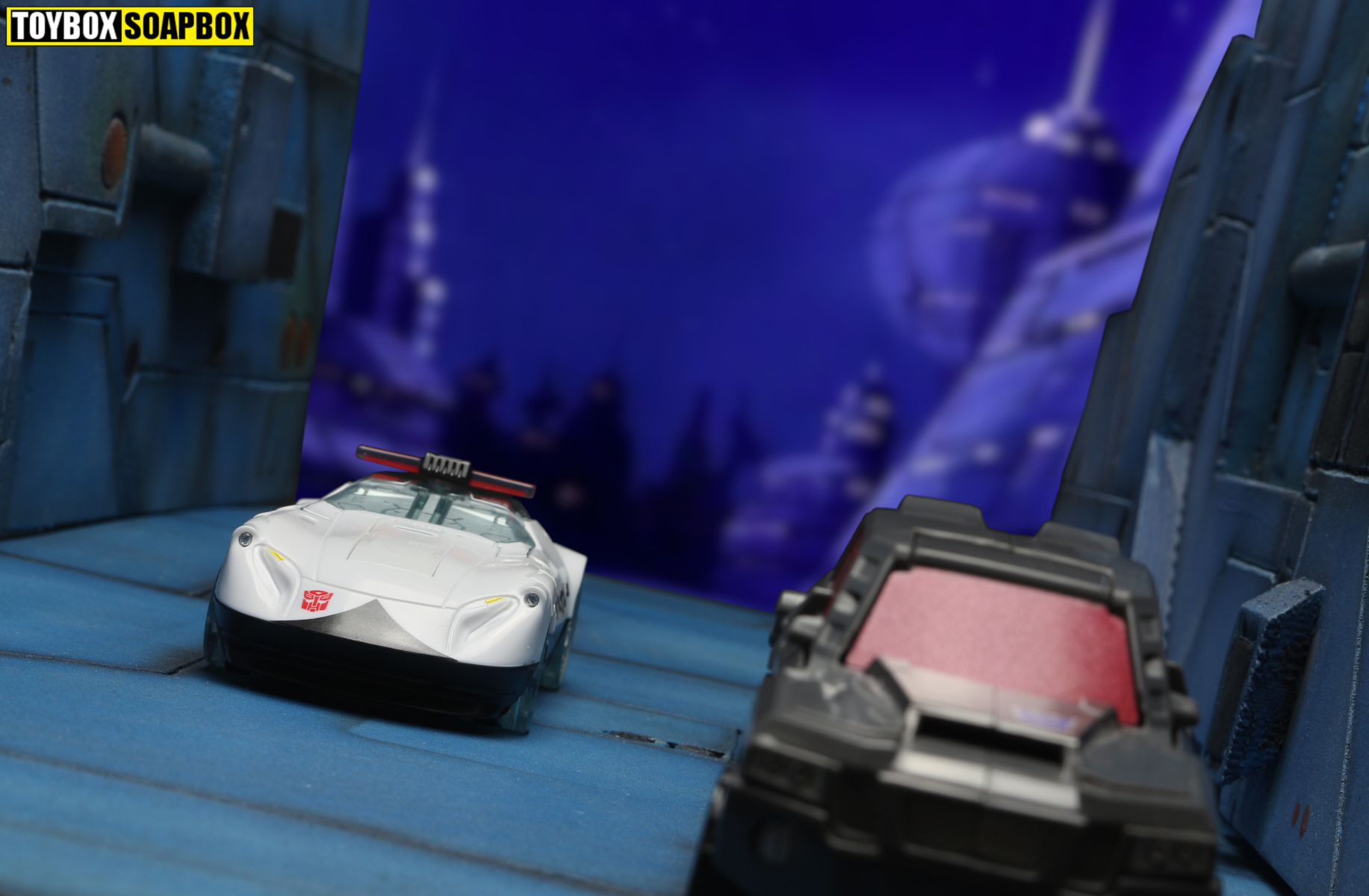 Channelling the spirit of the Fairlady Z, it’s a wonderfully sleek car mode and with no need for human passengers the cabin is compressed down to give the car the appearance of a squashed shoe that someone has found stuffed at the back of a shoe rack. Or something you’d see in a post apocalyptic city having been crushed by Godzillas village sized heel. Silver paint picks out tech detailing within the clear plastic, adding an advanced machinery feel in place of bucket seats and novelty cup holders. Casting the wheels in clear plastic is an odd choice because it suggests he’s rolling around on glass, which doesn’t seem the most reliable material for Dukes of Hazzarding it across Cybertron. They certainly wouldn’t go well with the speed bumps the council have stuck up and down my street. I’m not convinced they’d even cope with will the the stones on my drive. Thankfully,silver paint covers the rims and tones down the clear plastic enough that they don’t completely ridiculous. 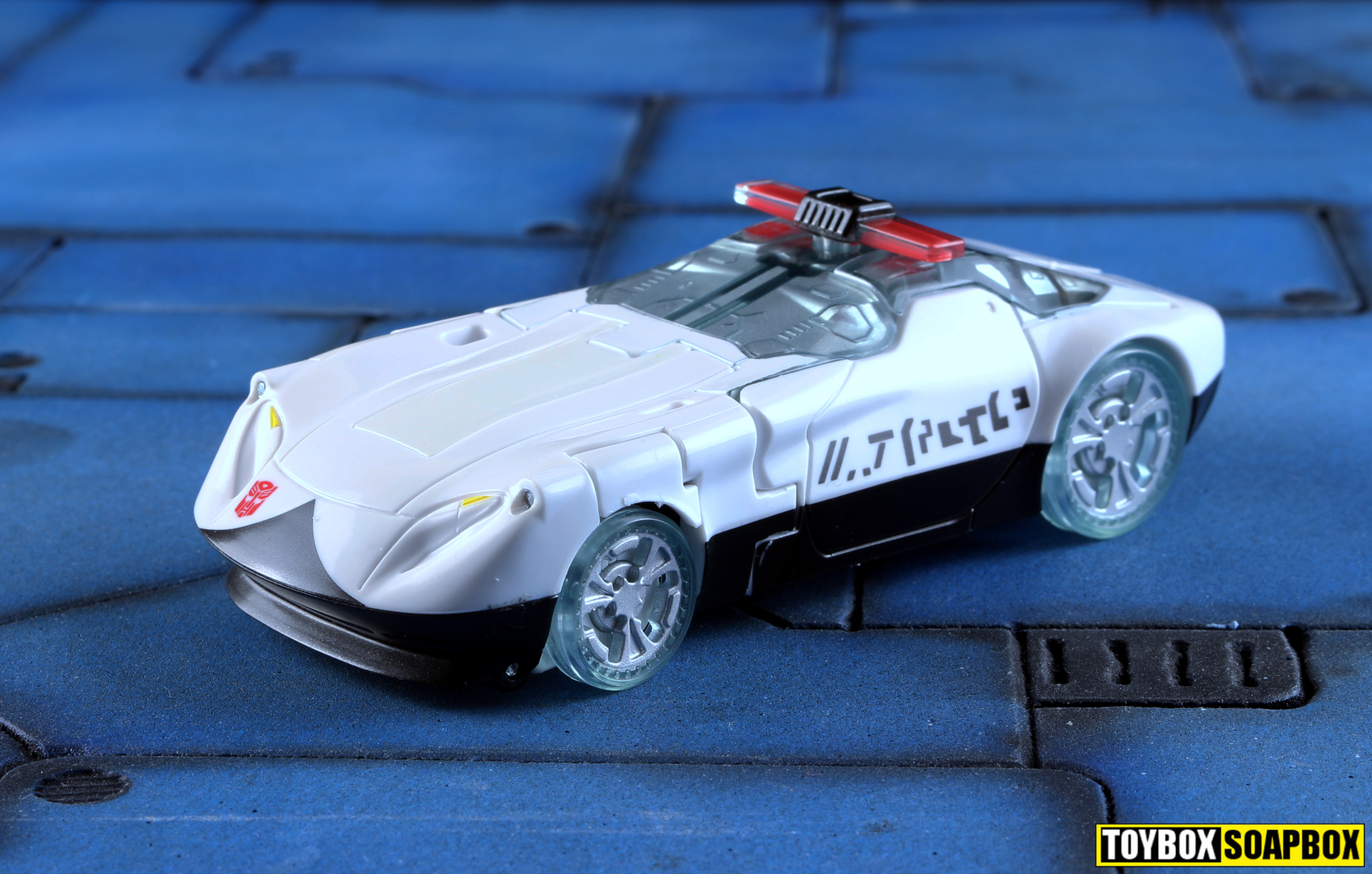 Notably the “battle damage” paint that makes people feel a need to tell me how much they hate it every time I post a picture of Siege Soundwave on Instagram, is not applied anywhere on Prowl. Seriously there’s even have a sniff off it, which is perhaps why the white seems to absorb so much of the detail. Personally I don’t mind the battle damage paint on the other figures, but it’s very hit and miss with it’s absence here speaking to the scattergun nature of it. Black paint skirts around the bottom of the vehicle like it’s partially submerged in tar to give Prowl his traditional Japanese Police car livery with Cybertronian markings on the doors that I assume say “Police Muchachos” or something to that effect. Whatever it says, it bears an uncanny resemblance to text messages I send after 5 too many beers. 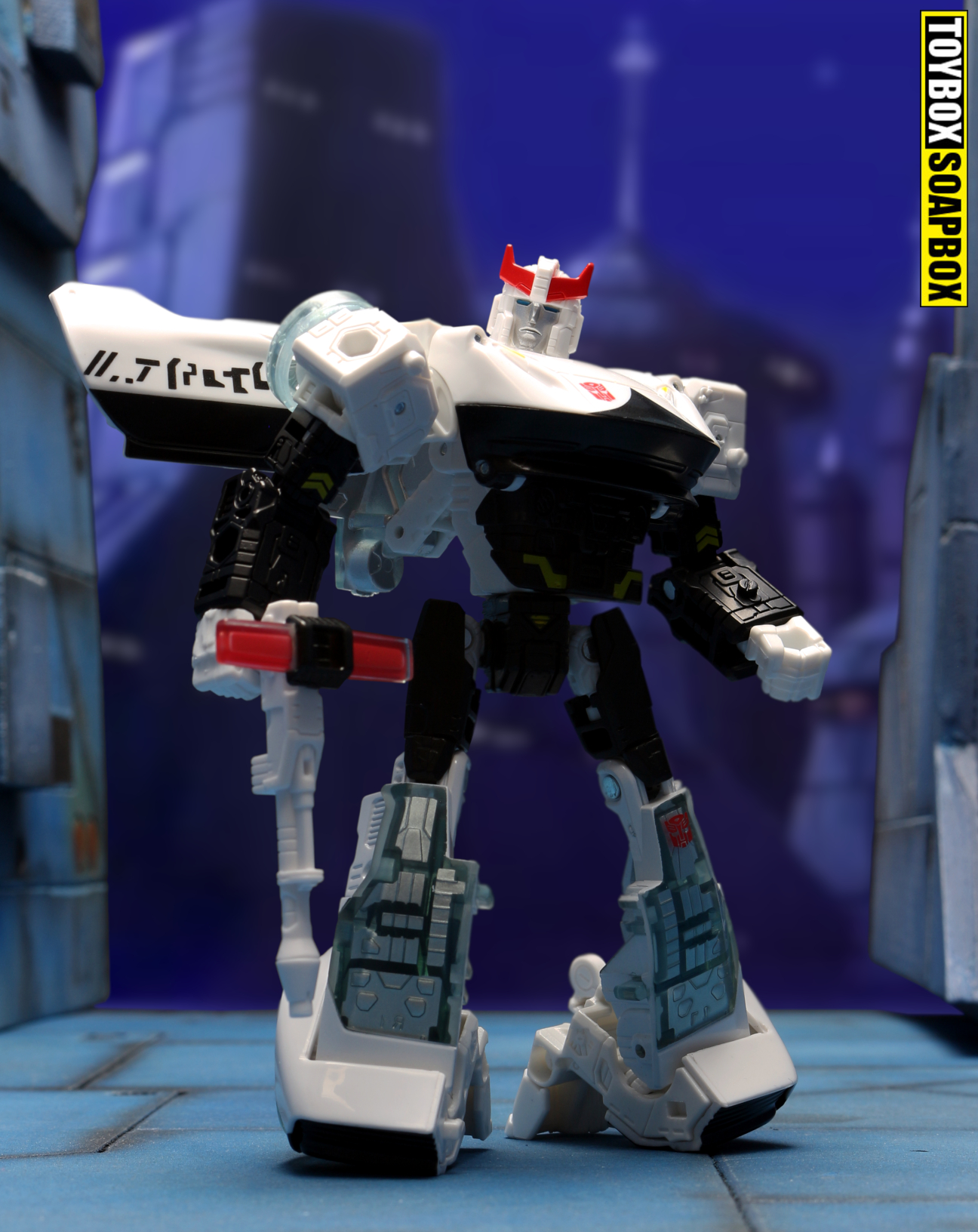 Sometimes Hasbro pay homage to a characters vintage transformation and Siege Prowl is a tatty library textbook example of a Transformer who moves like his old Jagger self. Split the car in half, rotate the waist and extend the legs. Unfurl the arms, pop the hood over the head and you are done with the broad strokes as much in 2019 as you were in 1984. Following the original almost beat for beat is not only nostalgic but it keeps it simple and quick. Within that there a couple of small twists such as the abdomen being a panel that flips out from under the car’s hood and the way the central strip of the bonnet slots into the cavity behind Prowl’s neck in a fun inversion of Masterpiece Bumblebee’s tummy tucking hood panel. Poke through the instructions and you will notice it tells you to remove the light bar during transformation, but you can wave Hasbro away and leave it on with no hindrance whatsoever. 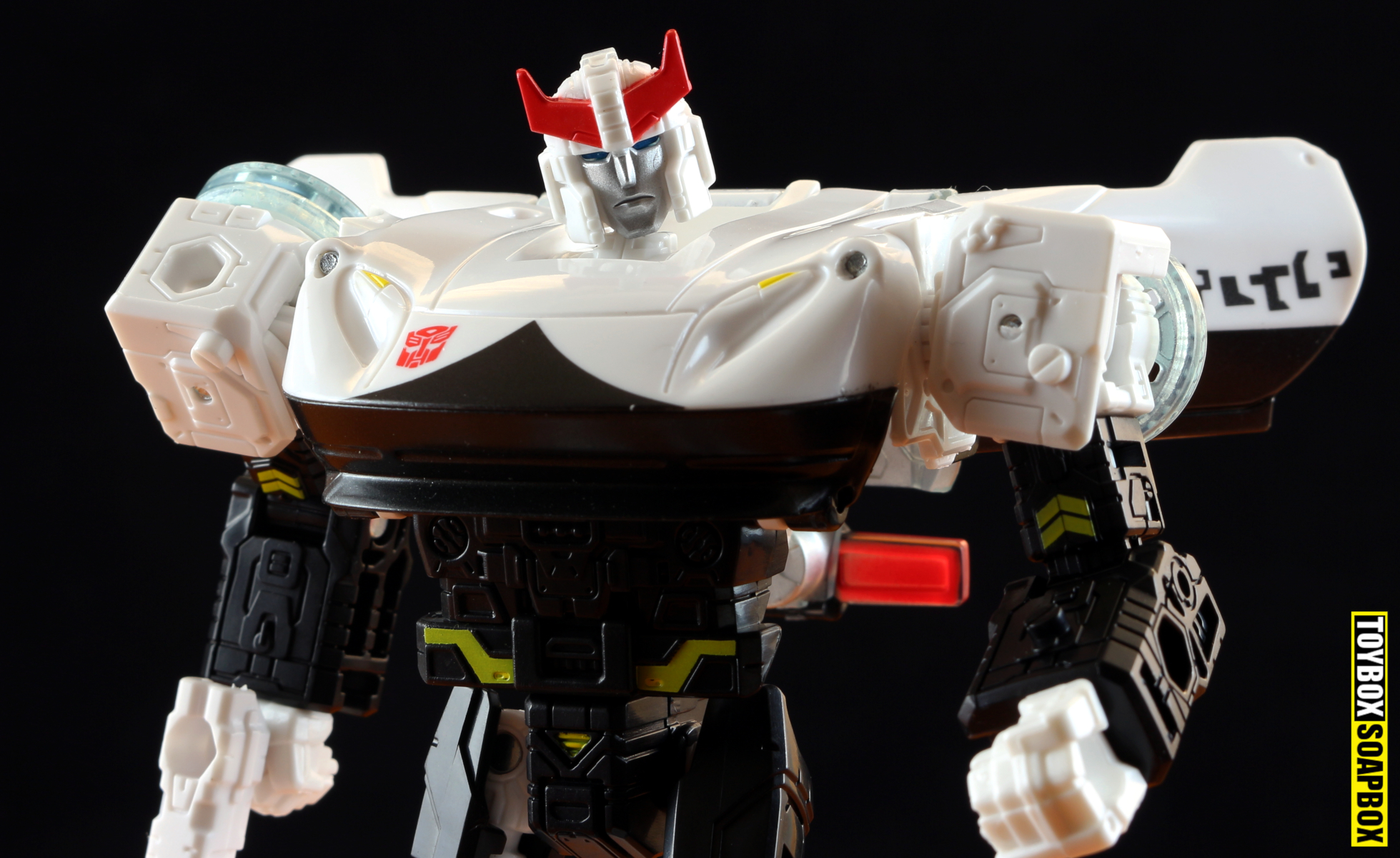 Prowl is an interesting looking bot. If the upper torso is broader than Brutus “The Barber” Beefcake, the lower half is as slender as Miss Elizabeth. Had Alice ignored the looking glass, and instead taken a peak into a fun house mirror – this is what it would have looked like. Awkwardly thin thighs distort the proportions, and the legs seem short which doesn’t help, but the upper chest and blocky shoulders are just too wide for the lower body.

Copying the vintage detailing and giving it modern Generations brush over is lovely, and there is another stunner of a head sculpt sitting atop the figure. Yellow paint is added to the waist and arms to evoke the classic toy, offering a minor retort to all the black threatening to engulf the middle of the figure. Battle damage/weathering may not be to everybody’s tastes, but slapping it on here might have helped break up all of the black and white. Or perhaps he’s just a very committed member of the NWO. 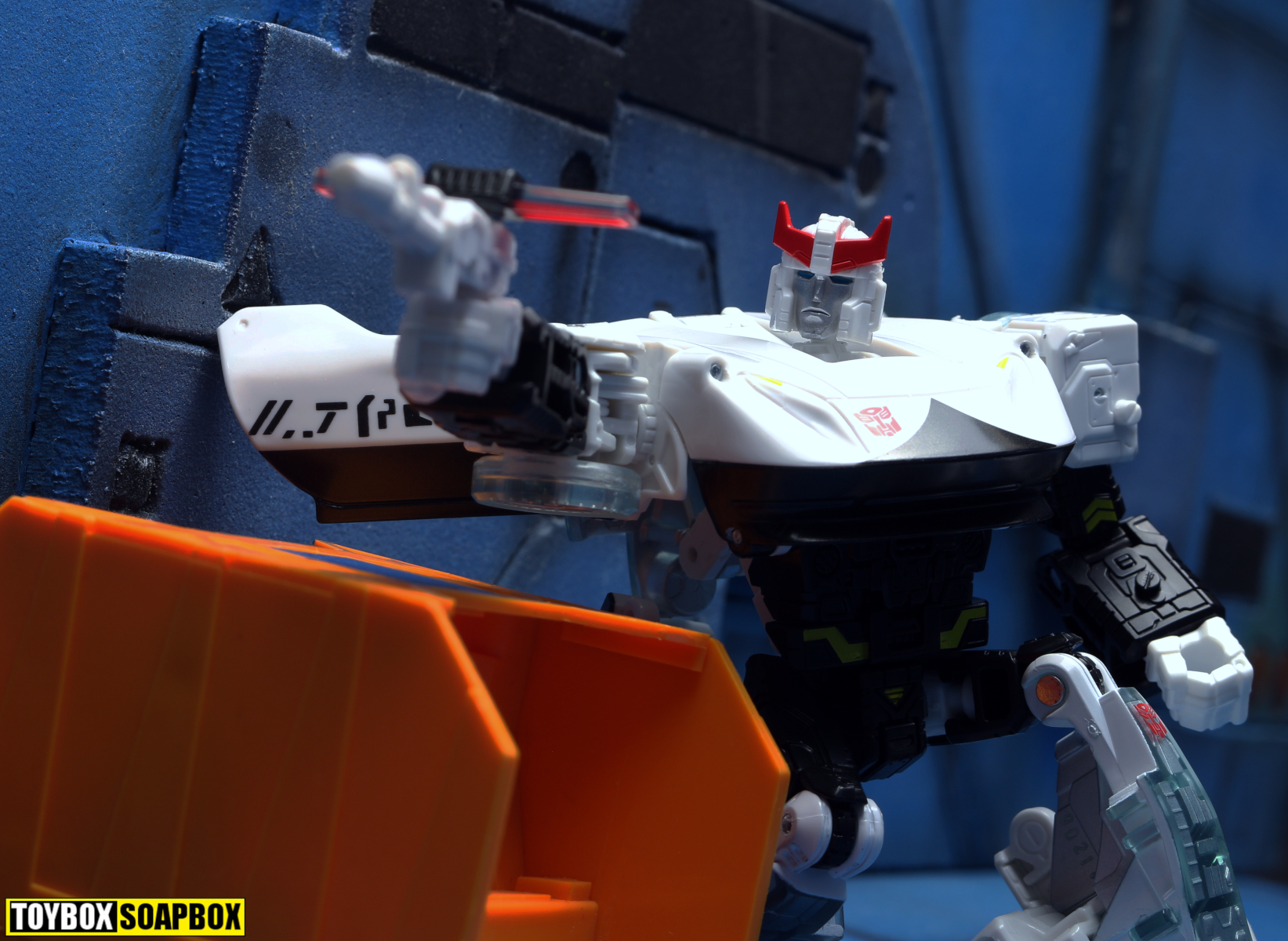 Fortunately you can make good use of the articulation to work around his proportions and improve things a wee bit, thanks to how many swivels and tilts this figure is packed with. For example, the ankles can open up wide enough for Prowl to get his Smooth Criminal on and his knees can bend all the way backwards on themselves with thanks to the transformation. Heels flip out from under his feet to give him a fine pair of kinky boots and also help him balance.

One disappointing omission is any form of upwards movement in the door wings. It must be a nightmare to be an architect on Cybertron and having to design doorways for walking cars and small towns to stumble through. 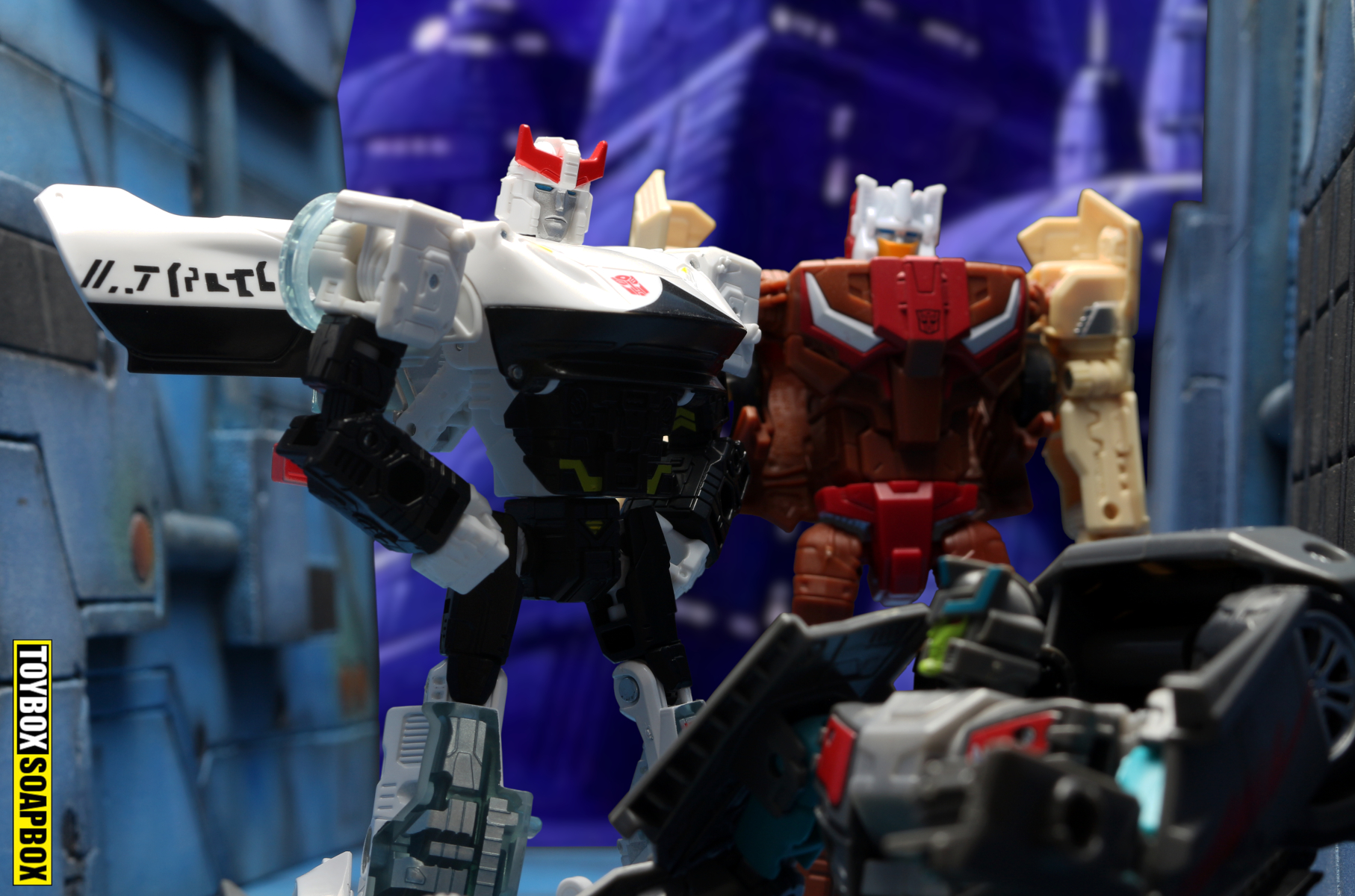 An “Acid Pellet Strikeblaster” is the only true accessory he comes with. It’s based on his vintage weapon only without the little pointy bit on the back. Now, the reason the instructions tell you to remove the light bar during transformation is so it can be pegged onto Prowl’s gun and sort of complete that silhouette. Not content with using his acid pellets to give bots severe acne he can also partially blind them with a big laser pointer. Two slots sit on his car hood that are intended for rocket launchers, but none are included. We know what they are for because we’ve seen a retool in Smokescreen proudly making use of those same slots with his own shoulder cannons. Should you be desperate to send Cinders to the rocket ball, then his shoulders have 5mm peg holes that allow you to decorate him with the corpses of Sixgun or Cog. 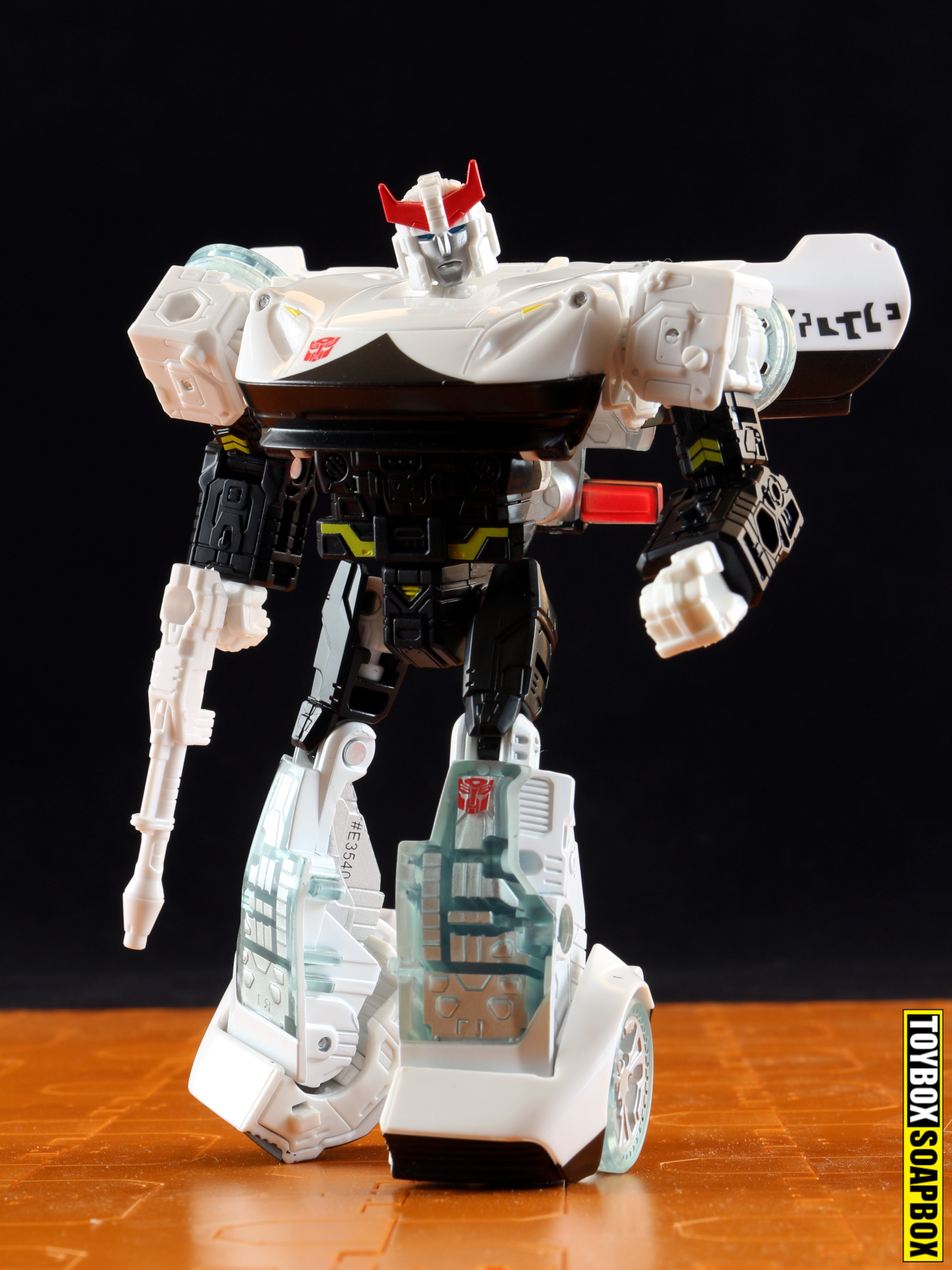 Siege’s rendition of Prowl is a decent figure. It’s not a great one but it’s far from a bad one. Separate the toy into its individual parts they all look great, but they just don’t come together as a whole in the way you’d want them to. Proportions area bit wonky, but in the big green tick column the articulation is great, the head is prettier than the twins from Funhouse and the transformation is one of the most fun and fluid you’ll find. It might be tough to escape the feeling that you are looking at a fork with Pot Noodle dangling from it, but there is still enough to like to stop you turning to your old Radiohead CD’s. This is a mold that is so close in idea to being great, but in execution compromises are made that leaves him looking like a ballerina wearing American Football pads.