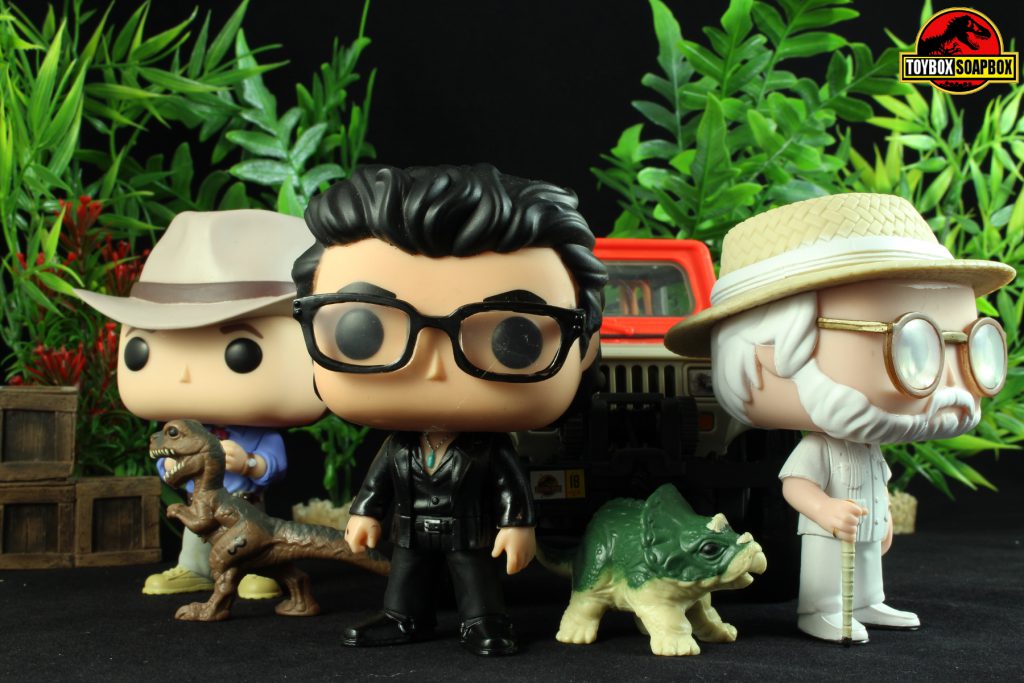 “Life finds a way” is one of Ian Malcolm’s most iconic quotes from Jurassic Park, and Funko have proven that if you slap a Jurassic Park logo on anything you will find a way into my wallet. Funko’s drive to trap the soul of all of pop culture and distill it into diminutive, bobble headed plastic bodies has seen virtually every franchise you could think of clutter the shelves of my local ASDA. It was always only a matter of time before Funko fixed their gaze on one of the biggest, most memorable movies in history – Jurassic Park.

Arriving on the advent of the 25th anniversary of the movie, the Jurassic Park series of Pops has already seen several of the characters, and the franchises most infamous Dinosaurs, given the Funko treatment. Arguably the most fondly remembered character from the movie, so much so that he is the only one to appear or be referenced in each of its sequels, Ian Malcolm was conspicuous by his absence from the first round of figures but in a manner befitting his own sense of self-importance he follows in a wave all of his own. Malcolm was the in universe voice of the book’s author Michael Crichton, on hand to point out the folly of mans attempts to control nature. Smug, sarcastic, flirty and all too keen to affirm how right he was, he stole much of the movie before hubris almost took a T-Rex sized bite out of him.

Have Funko managed to capture the essence of Jeff Goldblum? I was so preoccupied with whether I could that I didn’t stop to think whether I should…write this review that you can read below. 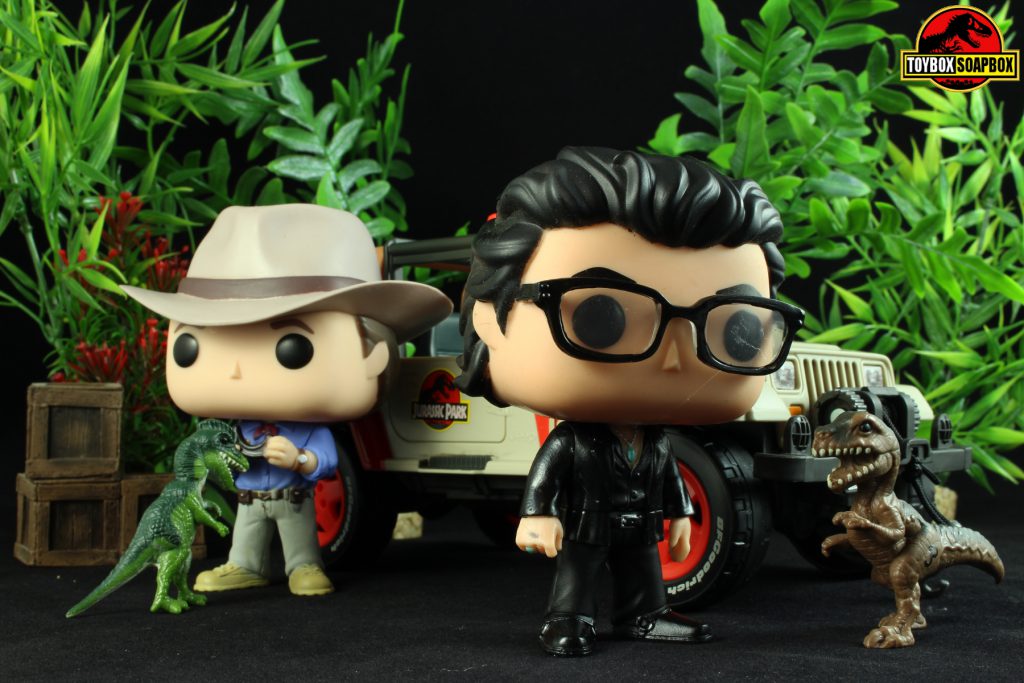 Two Ian Malcolm figures are actually being released by the peeps over at Funko towers. A standard freshly suited and booted, ready to face the day rock star mathematician version and a post T-Rex fleeing, crushed by a collapsed toilet amongst the scattered remains of Donald Gennaro chase variant. Of course, I have a burning need to own them both because clearly I hate having money sat in my bank account. Malcolm’s chase variant has eluded me thus far, but I am pinning my hopes on that tantalising Smyths Toys listing not being an elaborate prank by the Toys’R’Us void fillers.

Malcolm himself would probably be able to explain my misery with an equation. Chaos theory would be an apt title for my biography. 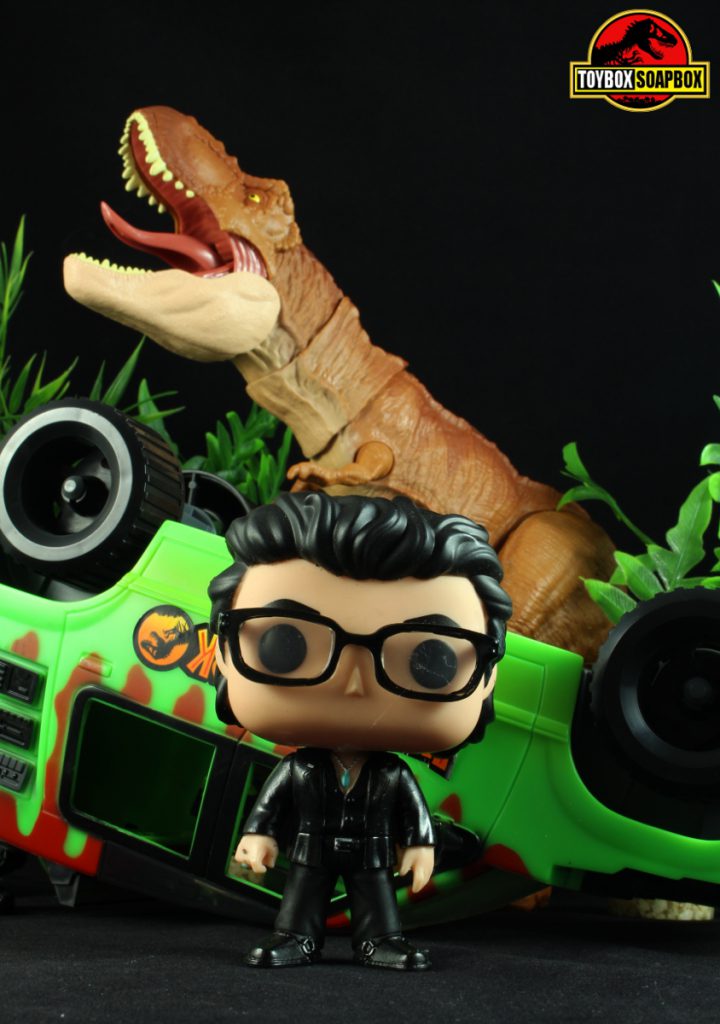 The first of the two Ian Malcolm’s to arrive is this one. Based on how he appears before heading off to hit on Ellie Sattler in the Ford Explorer tour vehicle, he features many of the signature attributes of his movie counterpart but shrunken down with the comically oversized head that defines the figures from Funko’s pop culture behemoth. His “Rockstar” mathematician leather jacket is so 90’s that there is probably a Tamagotchi in the pocket. Just like two of the other three Jurassic Park Pop Vinyls he also wears a pair of glasses which he sported at the beginning of the movie but lost during his Dino racing misadventure. It’s not like he needs them with those ginormous milk chocolate button eyes anyway. 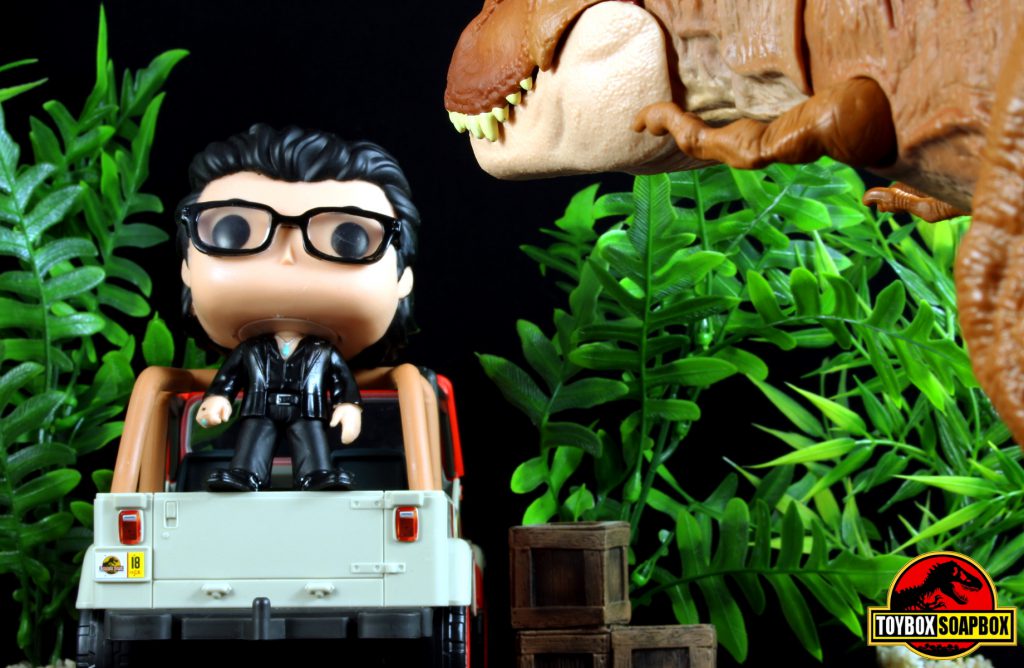 Funko Pops are not something I am really into but the Jurassic Park characters they’ve released work well in this form. There’s just something inherently charming about the movies characters that lends itself perfectly to this form and nowhere is that more fitting than with Ian Malcolm. Funko’s love of a novelty sized cranium could be seen as a physical manifestation of the “chaotician’s” sizeable ego and even the standard Funko face of ambivalence sort of suits him. With all of these things we tend to project our own ideas of a characters persona onto them and here you can imagine he’s just about to drop a sarcastic dismissal of Hammond’s attempts to justify his own god complex. 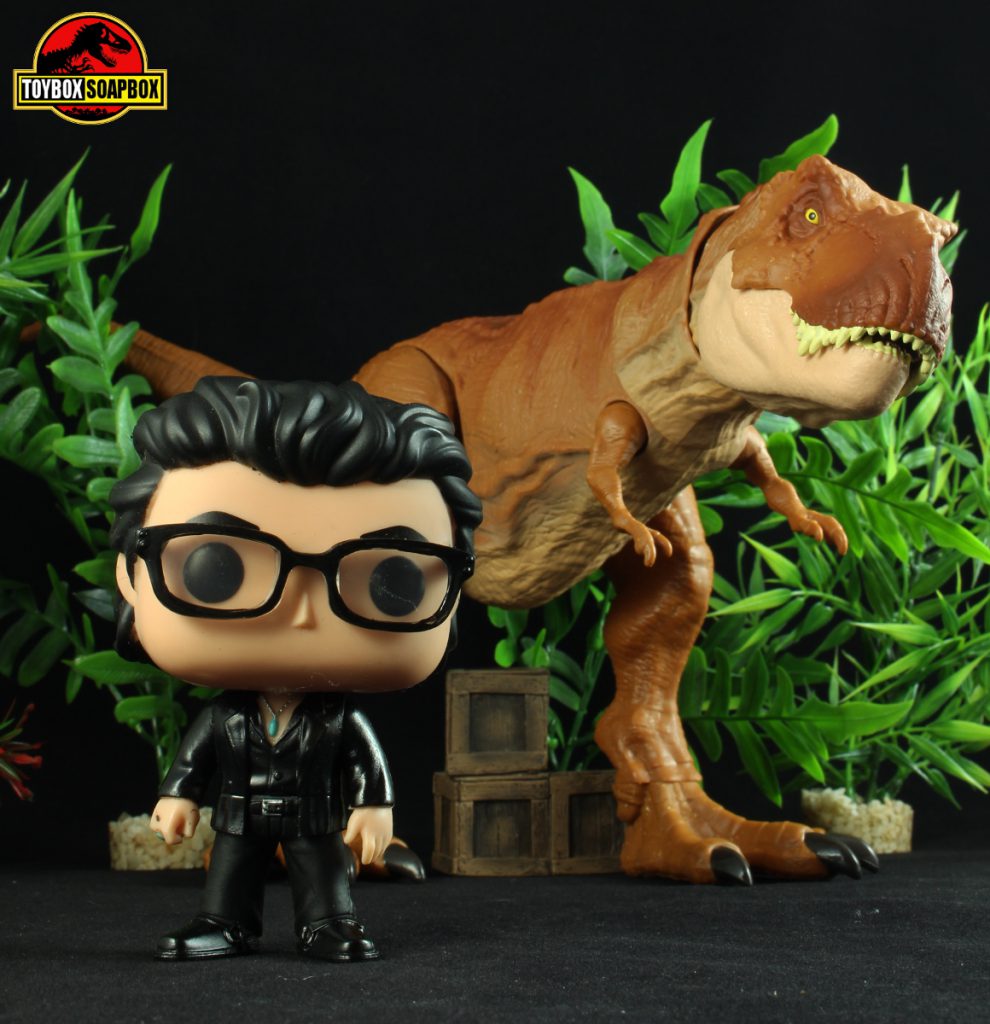 One of Jurassic Park’s greatest strengths, which is often overlooked, is the excellent cast of characters. Spielberg kept it small, focusing on a small group with each person seeming important and helping to convey the feeling of a band of people trapped in a terrifying situation alone on an island where everything wants to eat them. Each character is memorable and holds a special place in the comfort blanket of pop culture. Malcolm, Grant and Hammond may be the most memorable, but Ray Arnold, Robert Muldoon, Lex, Tim and even Gennaro all play very important roles within the story and it’s an ensemble cast movie with each being deserving of their own figure. As it stands, outside of figures for the new movie, the only scheduled release still to come is Ellie Sattler complete with a chibi Jeep Wrangler. If they wish to continue there is plenty of scope for them to mine the property further and beyond that there are the various sequels that are still untouched.

Essentially, as we’ve discovered, I am willing to chuck money at almost anything with a Jurassic Park logo on it.

If you enjoyed this article then please check out my look at the other Jurassic Park Funko Pop figures here: JP Grant, Muldoon and Hammond.