Were you to visit my house, you’d find a couple of Pop Vinyl toys dotted around but it’s a craze that largely flies over my head. My girlfriend has the full set of Labyrinth Pop’s, whilst I have a Jack Burton on my desk because Big Trouble in Little China is right up there in the pantheon of Toybox Soapbox’s favourite movies. Up there right alongside it is Jurassic Park. I have spoken before about my obsession with Jurassic Park. I was there opening day, I had as much merch as I could convince people to buy me and it filled the void left by my prior obsession with Teenage Mutant Hero Turtles. Star Wars, Marvel, DC etc all offered beautifully fertile and diverse universes that my imagination explored during the 80’s and 90’s, but Jurassic Park is the one that felt so tantaslisingly close, so almost real and touchable that my soul ached to visit it.

Two sequels came and went without grabbing me because I soon realised my interest was mainly in the park itself. How it worked, what the other areas looked like and what became of it. They mystery of the whole thing teases me even now. The dinosaurs themselves were just a brutally chaotic mushroom power up. As a result, Jurassic World hit me in the biggest of ways as it gave me that lively, working, dinosaur filled park – and we got to see it in action. But it’s not the original park. Funko have done something everybody else seemed reticent to do and have returned to the cast of the original movie and given them all new Pop Vinyl figures. Conveniently, they are the source of this article right here.

“Hold on to your butts…” 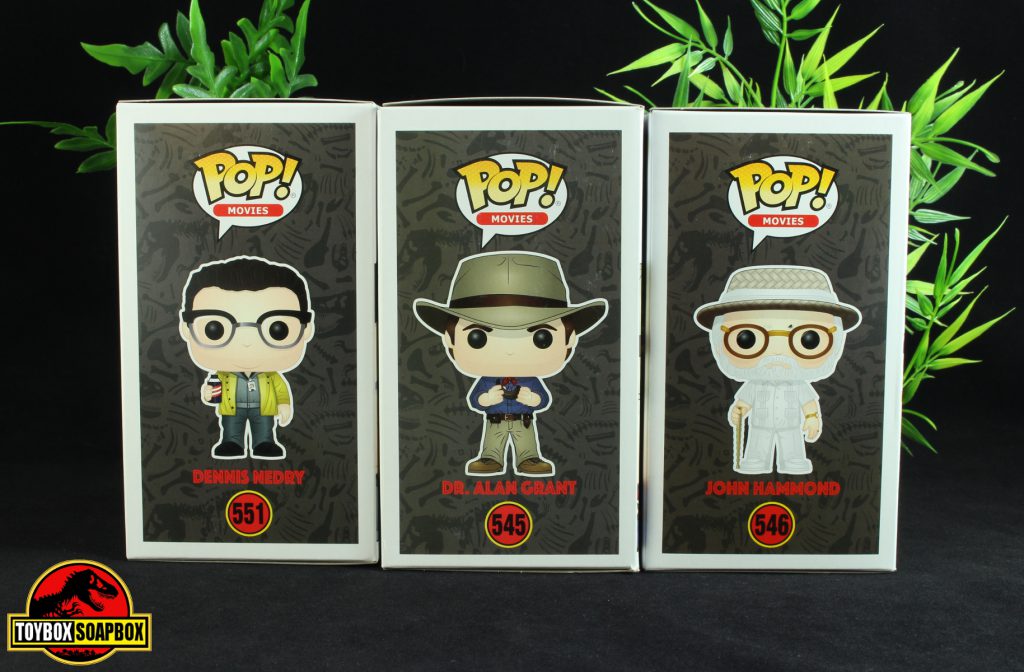 Of the many memorable characters who populate the movie, five get the dead eyed Pop Vinyl treatment along with several of the movies signature Dinosaurs. Ian Malcolm and Ellie Sattler are sorry they couldn’t be here but they had prior commitments, and the Dinos are off chasing workmen around an Amazon warehouse somewhere, so we are left to discuss Alan Grant, John Hammond and the nefarious Dennis Nedry. In terms of character choice it’s tough to knock Funko as they have selected probably the most important people from the movie. I’d have liked a Robert Muldoon or Ray Arnold (the chase variant could be just a dismembered arm!), but if I had to pick five characters who would be immortalised in big-headed, dead eyed plastic – it would probably be this bunch. Hopefully more are in the pipeline because I’d really like to add the two previously mentioned, as well as Lex, Tim (with “burnt toast” chase variant”) and Genaro (on toilet variant?). 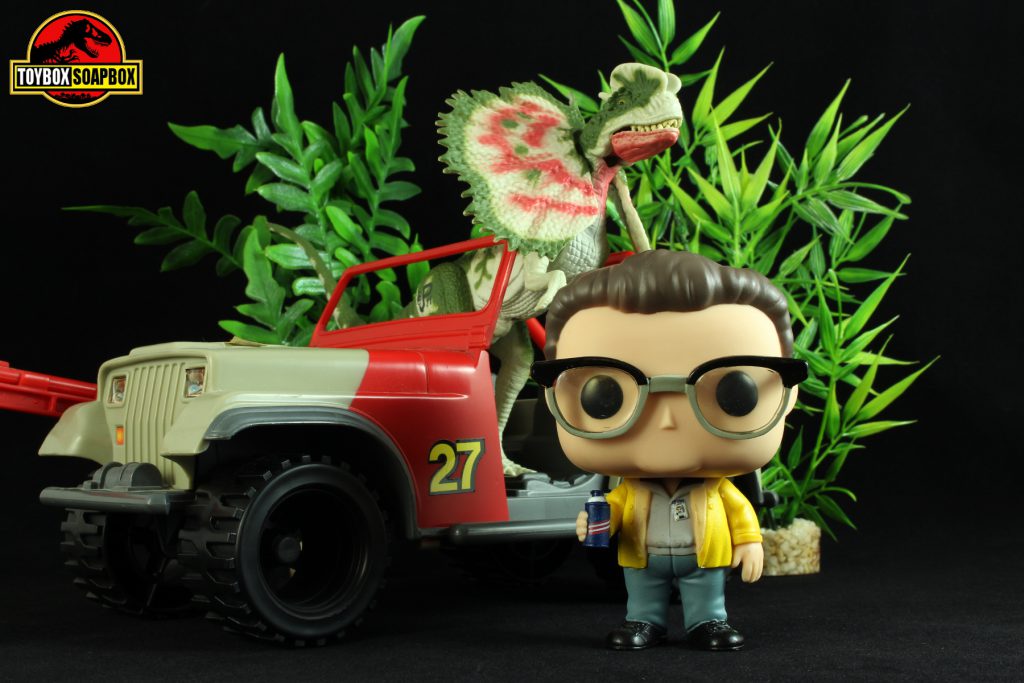 Dennis Nedry is probably the most interesting pick of the bunch. A computer wiz, with a ravenous appetite for bags of money and lunching with Dodgson, he is the man who sets in motion the disastrous chain of events that leads to the parks demise. Motivated purely by greed, he is the antagonist of the movie who even though you wouldn’t consider him a main character, his influence spreads across the movie and is the plot device to facilitate that sets the table for the dinosaur buffet. Which is probably the reason why he features in this shrunken plastic line up ahead of Lex and Tim who had far bigger roles in the movie. It’s a good job too as his Pop Vinyl steals the show as much as Wayne Knight, in the acting role, did. 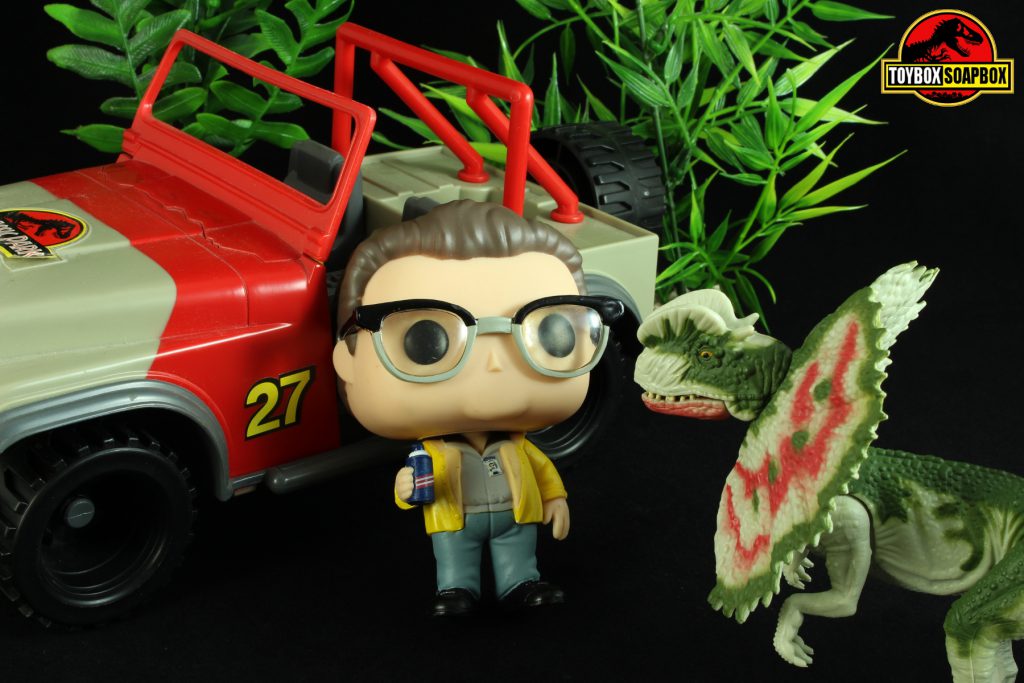 All three of the Pop’s in this article are holding signature items from the movie, but Nedry is clutching perhaps the most fun of all – the iconic Barbasol shaving cream can. Seriously, the mystery of what happened to the can after the events of the movie still tantalises me to this day. To the point that when I was at school in 1993, I wrote a sequel story detailing InGen’s attempts to retrieve it and my teacher had it on display at parents evening. Young Liam didn’t take criticism well then either. Of course, the can was Nedry’s way of smuggling stolen dinosaur embryos out of the park and accordingly he is decked out in the outfit seen during his unsuccessful attempt to flea the island. Everything is as on point as a Mr DNA presentation. The yellow rain mac, the tiny ID badge, the glasses and even the double chin are all replicated to great effect. Even his shirt collar is painted black. Eagle eyed Jurassic Park fans (or fussy gits like me) will notice the Jurassic Park emblem is not found on the front of his jacket, but that can explained away by the folded lapel of his jacket on the front, however the one from his back is also absent. The only other thing missing is an electronic voice box that repeats “ah ah ahh! You didn’t say the magic word”. Man, I really need that as my ringtone. 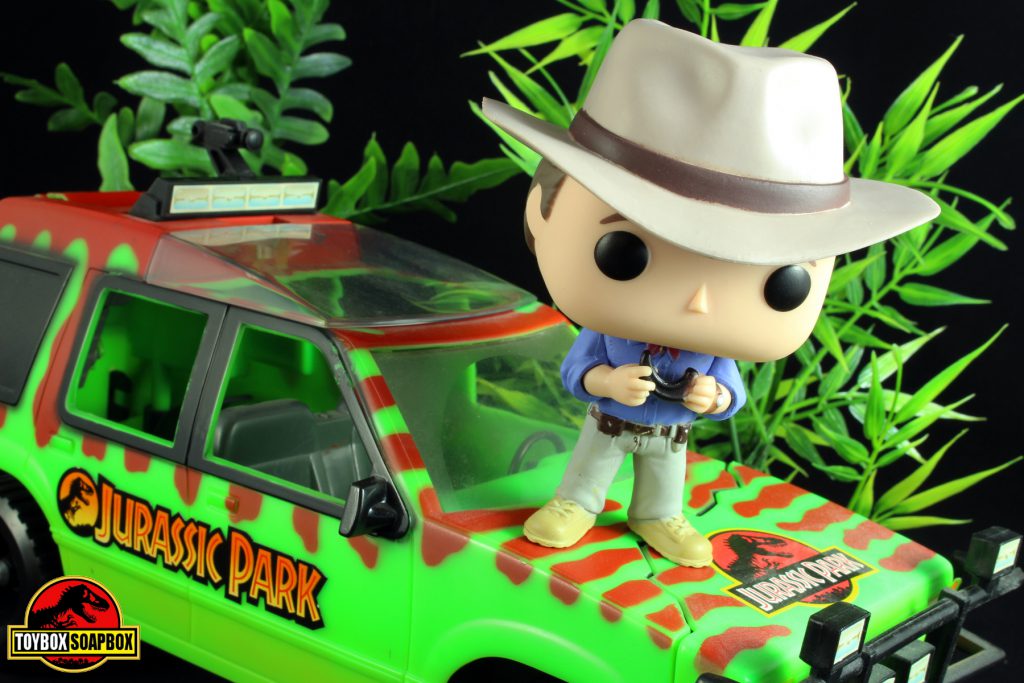 Alan Grant was one of the central characters of the movie and if anyone was a shoe in for a toy it was going to be him. A grumpy middle, his hobbies include digging up bones, dangerously removing the safety harnesses from moving rides and terrifying children. He is the reluctant hero. The guy who just wants to quietly go about his own life with a bottle of whisky and not let the modern world encroach into his own little dusty corner of the universe. But encroach it does and he finds himself thrust into a semi-parental role chaperoning kids around a jungle infested with hungry dinosaurs. His pop vinyl is also quite beautifully done. He rocks the blue flannel shirt, red neckerchief (is he a sailor!?) and even his belt is picked out. Some rogue brown paint has made its way over the zipper, which is a tad unfortunate. His trousers do seem to be grey, rather than the beige of the movie. His signature hat crowns his head and the curvature almost gives him a furrowed expression. Like he’s annoyed that he is in Pop form.

Contemplatively held in his hands is the Velociraptor claw that he carries around with him throughout the movie, and that he memorably used to strike terror into the heart of a kid. Grant doesn’t want children, and social services workers across the USA would have breathed a sigh of relief. 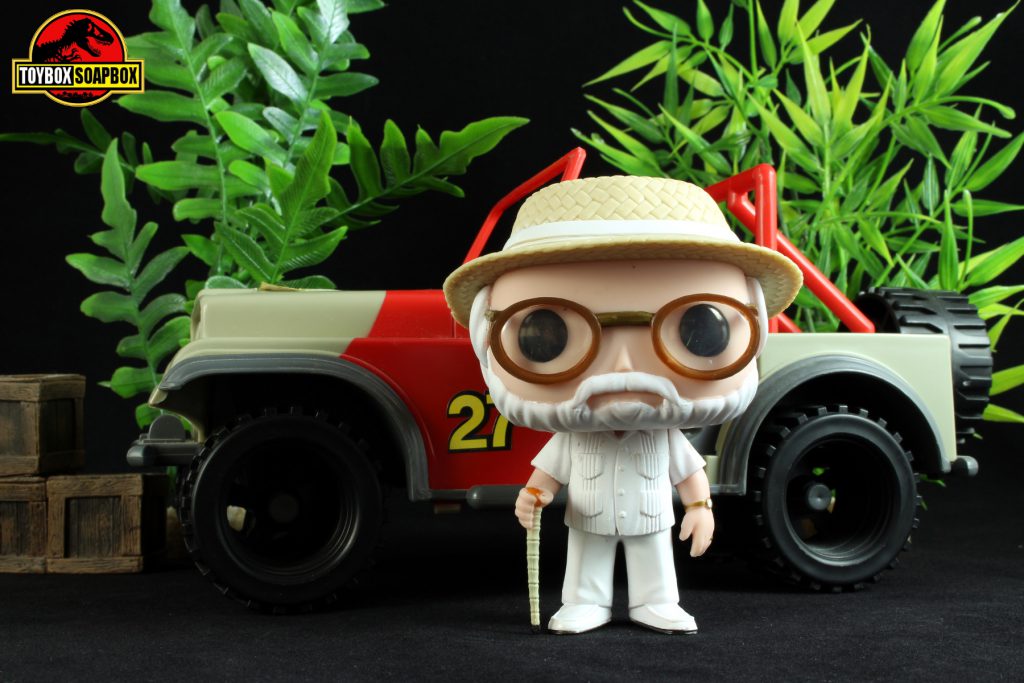 What can be said about John Hammond – the grandfather I wish I had. I mean, I had a grandfather, but most people get two and this is the other one I wanted. Hammond was the man whose attempts to dress capitalism up as altruism fell largely flat as his dreams of a park populated by extinct creatures spun into a stark nightmarish reality. He fancies himself as a sort of ecologically minded Walt Disney. John almost exists in a bubble from everyone else who are very much weighed upon by the reality that’s chomping its way towards them, whilst he keeps pondering how to improve it for another crack. I admire that sort of delusional pragmatism from a man who patented a god complex. His Funko Pop recreates the outfit he wears for the entire movie, which is similar to Charlie Sheen’s wardrobe now. A kind of golf playing, retiree who I see regularly in my local Sainsbury’s. He does come complete with the iconic amber topped cane and the beard really sells that it is him. They’ve even nailed the tiny details like the loafers, his watch AND his wedding ring. 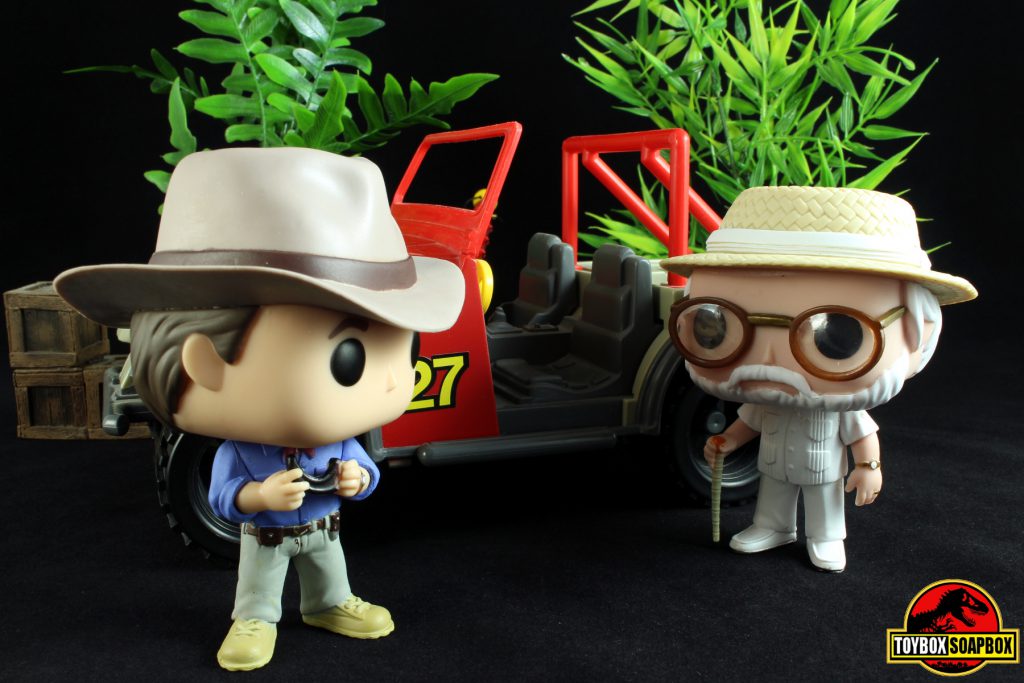 Ellie Sattler and Ian Malcolm are still inbound, whilst there is an incredible bonus Ian Malcom that is in the lying down injured pose that has fueled many a meme. Claire Dearing and Owen Grady JW2 Pops are scheduled as part the Jurassic World: Fallen Kingdom merch onslaught, but it would be a shame if that spelled the end of the Jurassic Park series of figures in this line. Lex, Tim, Muldoon, Mr Arnold, Dr Wu, Genarro, Dogson and even the various unnamed park staff are all deserving of Pop Vinyls for me to shove onto a shelf/shrine. One of the movies great strengths every character is memorable and has their own moments which would later be etched in pop culture iconography.