I am starting to think we’ve moved into some bizarre alternate timeline. Away from all the political strife and weirdness like Wayne Rooney breaking Manchester United’s all time scoring record, Hasbro have continued to sprinkle Titans Return with obscure characters we never thought we’d see get updated figures or at least not so close to their vintage counterparts.

Triggerhappy is the toy equivalent of Carlos Alberto’s glorious goal against Italy in the World Cup Final, Hardhead, shades of Maradonna’s non punchy goal against England, Twinferno is Michael Owen racing through the entire Argentinian side in France, Wolfwire the majestic controlled finish of  Bergkamp vs Argentina, Skullmasher the time bending Poborski lob over a hapless Portuguese keeper in Euro 96. Only Getaway has been a bit of a Baggio-esque USA 94 penalty miss.

Now, we have a brand new Sharkticon toy. Leaked as a potential release a few years back in the Generations line, Gnaw has finally rocked up in the midst of one of the most fun periods for collectors in many years.

But is it worth the wait?

Gnaw is the tiny Sharkticon you always wanted but never thought you’d get. Releasing them as Legends class figures is a masterstroke on Hasbro’s part as it enables to people to troop build them at a reasonable price. We are all going to troop build them too as nobody really just wants one. I will get three because for some reason we are always obsessed with troop building in threes. Two is never enough and four seems like overkill. So I will have my Tri-Force of crunchiness, 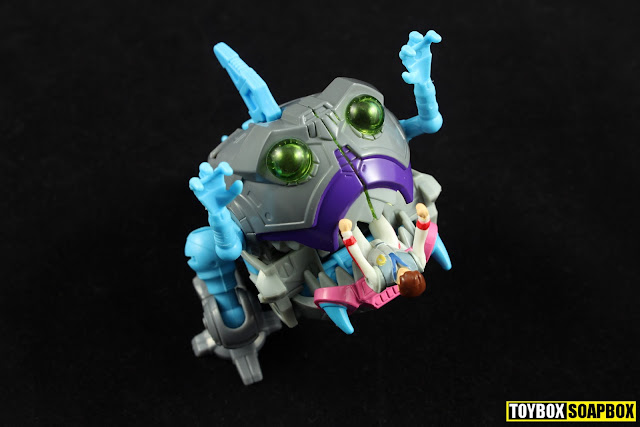 The sculpt is bursting with character. For such a small figure that looks more like a crouching Blanka from Streetfighter 2 than an actual shark -Titan Returns Skarticon Gnaw is flush in detail.

A face full of teeth, pink underbite, jaw spikes, rounded dome, blue clawed T-Rex arms, green orbs for eyes….this is straight out of Transformers the movie stuff. Looking at the animation model and then this it’s amazing how just how work Hasbro’s designers have done to capture everything possible. Signature details are all present but Hasbro still found room for new ones. Each orb like eye bulges from the eye sockets, as they should, and through the tinted Slimer style green plastic are little etched in lines that call to mind the goggles from Jurassic Park. When I can combine my love of Transformers with my love of Jurassic Park, and make a Streetfighter reference – it’s a good day.

Colour wise Hasbro have followed a path of homaging the vintage toy (that I didn’t even know existed as a kid in the 80’s) and have left movie accuracy for Takara’s revelry. It’s not often I say I am super excited to pick up a third version of the same figure (I already have two of these guys) but I cannot wait to see how nuts Takara go to with those tins of paint.

An opening mouth allows a Titan Master to fit inside each Sharkticon’s mouth and attach to the standard pegs, but it’s more fun for them to chew on Daniel. Manchester City blue arms do move 360 degrees but have no elbow articulation or anything like that. Gnaw’s legs are ball jointed at the hips and at the knee which grants him a decent range of motion though with the bulk of the body sitting ahead of them, he will topple if you try to get too clever. 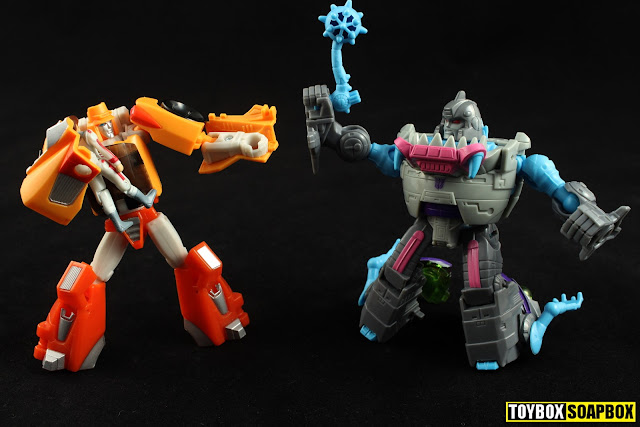 Transforming Gnaw is not complex. Unfurling the legs is the bulk of the transformation and the shark head splits into two halves which rotate on each to form the biggest heel spurs you ever did see. Gnaw’s shark legs slide up on a hinge to form arms, the tail pops off to form a flail weapon, his tail fin swoops up onto the back and the robot head flips out so he can see stuff.

It’s a quick, but clever stuff that’s designed just to be fun – and it wins at that. Gnaw is the kind of thing I’ll have on my desk just to pick up and transform back and forth as I try to wrap my head round yet another “why isn’t this working” email at work.

In robot mode he is just as spot on to the vintage design as in Sharkticon mode. He still looks like a Yorkshire pudding has sprouted arms and legs whilst he also wears the shark modes lower jaw in homage to Mr T’s gold chains. His head is a gorgeous sculpt, as you’d expect from Hasbro at this point on the back of Combiner Wars and other Titans Returns releases. Gnaws G1 toy is the inspiration for the head but to be honest it’s just as close to the animation model so there’s that.

What took me ages was figuring what is wrong with it. Something looked off  from the start and after eating a few bite size Butterfingers, it game to me – there’s no wings. One of the Sharkticons signature features, so signature you probably don’t even realise they aren’t here, are the creepy batwings. Floro Dery was pursuing a very overt angels and demons vibe with his designs, as the Sharkticons, Scourge and Unicron all have a very sinister look to them with demonic wings whilst the original design for Ultra Magnus called for him to have angel wings.

Articulation wise there are a goog range of ball jointed limbs, but oddly they are moulded at awkward angles so can’t straighten out. His arms form from the shark mode legs and the lower legs being sculpted bent to give off a little beastie vibe equates to them looking horribly uncomfortable and like he has had a serious accident.

The thighs are curved as a result of the brilliant way they form the back of the alt mode, but Hasbro engineered an unecessary stopping point that means in robot mode they can’t straighten. He is forever destined to squat as if he badly needs the toilet and there is an unbearably long queue.

Gnaw is a another legends figure that Hasbro have knocked out of the park. He’s not complex or the most heavily engineered bot you’ll ever come across – but he is not intended to be, His sole reason for existing is to be a fun little toy that you’ll want to buy at least three of.

I want one repainted in Blanka colours. NOW.