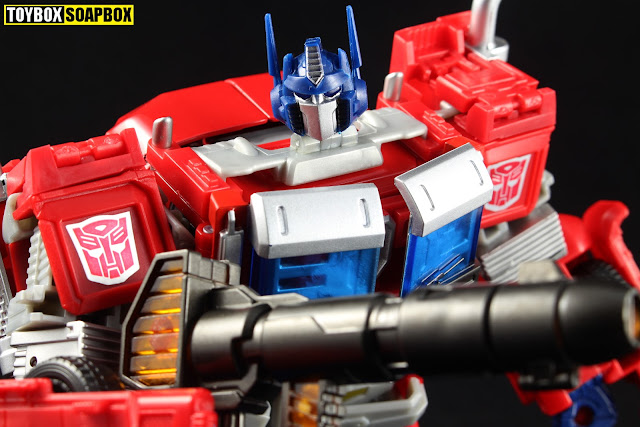 Am I seeing things? Is this real? Beelzeboss Spiritual Leadership kit has actually been released…as is sat on my desk?

Announced mid way through 2015, if memory serves, this upgrade kit for Combiner Wars Optimus Prime caught my attention with how it dealt with that toys myriad problems. New clothes, better proportions and a simple installation process all offered something that seemed enticing even at a price that was almost twice the cost of the actual figure. It even has a funny, cult like name to boot.

So now it’s here does it live up to that promise? 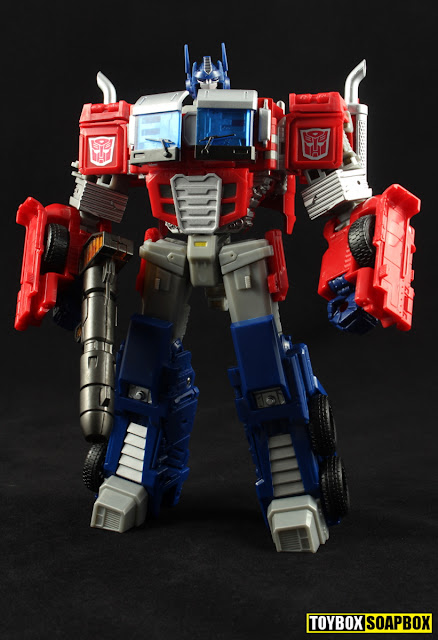 Upon liberating the pieces of the kit from cardboard captivity, that incidentally looked like it had been mauled by a pack of wolves,  you are given surprisingly clear instructions on how how to install them. Far from the harrowing ordeal that was installing SND’s Primo Vitalis alternative, most of the pieces slide on or clip on with the bare minimum of fuss and require no modding to the toy. Adding the knee extensions is the only aspect that requires a bit of work as you need to remove screws from the back of the thighs to slot them in. I took the opportunity to also install a pair of Nonnef hip ratchets at the same time because they are ace and if I’m spending a fortune to upgrade a figure, I don’t want trapped in a perpetual extreme A-stance. 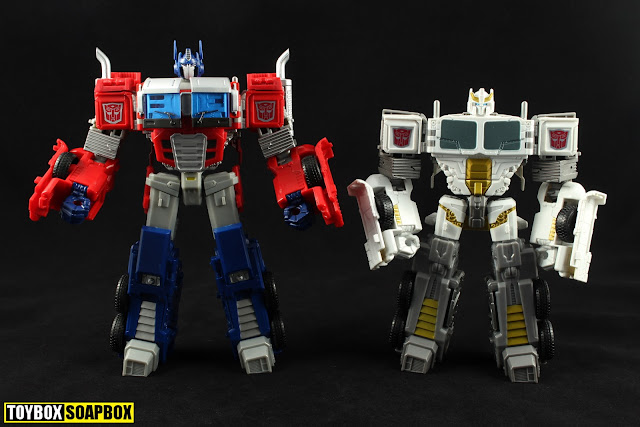 As you can see, the kit dresses Prime up and strips away those peculiar ape like proportions of the original Combiner Wars Optimus mould. Leg extensions stretch him out, now shoulder pieces and pec windows extend the chest upwards and new head sits on the peg which the old combiner head once called home to further lengthen Prime.

Simply adjusting his proportions makes a significant move in the right direction as Prime is usually depicted as being tall and athletic rather than wide and pancaked like the Combiner Wars figure confusingly shoots for. With his new parts he clocks in at just over 8 inches tall which is equivalent to the old ultra class figures if you happen to have an old Universe Silverbolt lying around. Not quite enough to make him stand eye to eye with leader Megatron then, but enough to impose himself above other voyager class figures.

What it does to his look though – that’s even more impressive. 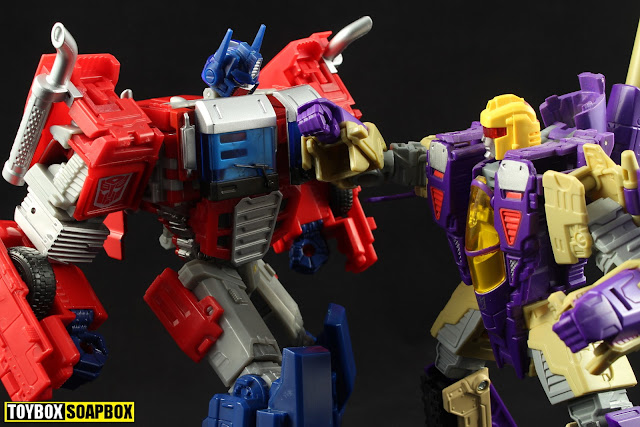 Taking inspiration from Andrew Griffiths IDW redesign is another place Beelzeboss choose to deviate from SND in their approach to upgrading Prime. Vocalising my dislike for Don Figueroa’s IDW Transformers designs is not something I shy away from, so I can happily say it’s this design I want more in toy form. Beelzeboss recreate the same chest grill, (am I the only one that can see a laughing bird face in it?) restore the signature smokestacks hanging from the shoulders, add red truck panels to the hips and huge blue knee pads that look great and aren’t heavy on the detailing (in a good way).

Accessories included are a ginormous version of Prime’s signature Ion blaster and an alternate head which has more pointy outy antenna and thinner, more aggressive looking faceplate. At first it’s tough to tell the difference and if I hadn’t mentioned it, you probably wouldn’t have noticed that the head in the picture above is different to every other picture in this article (or if you are looking at the Facebook gallery, eerr…there).

It’s different enough to not be my favourite, as the other ones wider mouth plate gives him a fatter more Optimus Prime like bonce. Both heads do a good job of capturing Prime from the comics and include the grey, painted vents on the side of his cheeks which I am not keen on. I am shamelessly traditional.

Each head offers some lovely light piping when it’s lit, but makes his eyes look dead when it’s not. Takara would be proud. 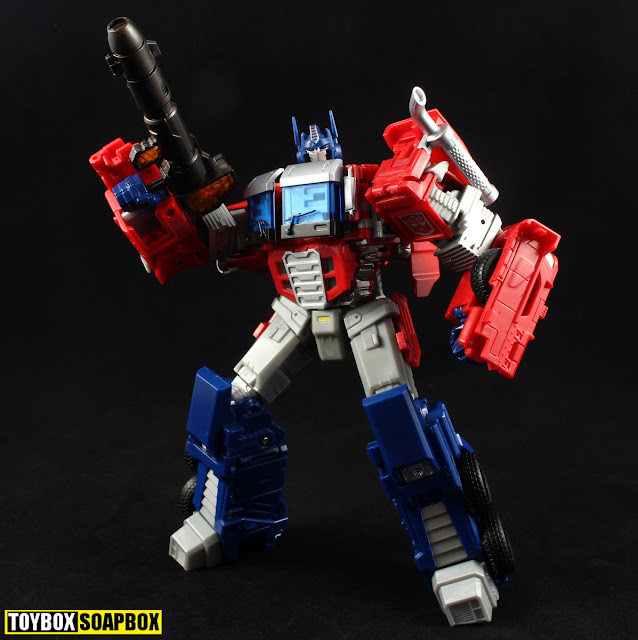 Extra height gained from the kit does have a small effect on stability. You can still get plenty of great, dynamic poses but this figure badly needed new feet to help him fight wanting to flop backwards in said poses. Beelzeboss are knocking another upgrade featuring new hands and feet at some point in the distant future, but SND included them as standard for less money. That’s what you are competing with Beelzeboss.

Articulation does get a small boost in the form of a sweet double knee bend care of new transformation joints. But that’s your lot. The new red holster like pieces either side of the leg rotate to move the new hip covers in order to keep a full range of leg articulation. A neat solution in theory but in practice those covers are attached to the smallest of pegs and just fall off. Constantly. Like all the time. Thankfully it’s only a small annoyance in robot mode, but “transforms” (sorry, couldn’t resist) to full blown legal defence for violence during the transformation

Everything else seems to lock into place fairly tightly on the robot, it is just those maddening y-fronts. 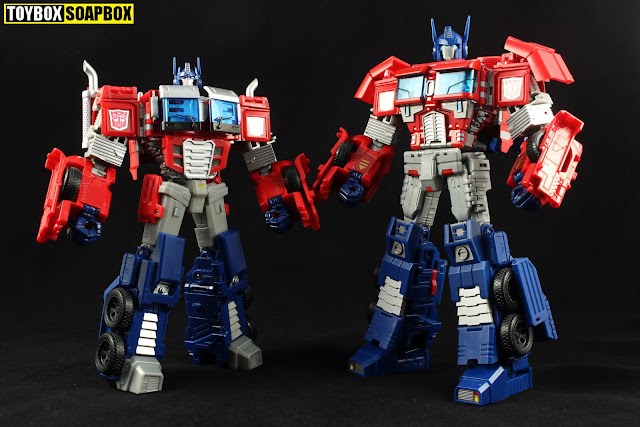 As far as upgrade kits go, Beezleboss have done a decent job on the robot mode. It’s simple to install and gets you straight there without feeling like you’ve spent half hour going round in a tumble dryer trying to get a pin back in. It’s funny because everything from the stomach up holds in place firmly, but below that the waist panels fall off, the crotch can eject depending on how you move the legs and even the thigh panels can come off if you move the leg in the wrong place. Once you spend a bit of time with the figure you kinda get used to that and know how to handle it, but that shouldn’t be the case – those pieces should have been designed better.
What we do have, fortunately is a robot mode that looks closer to what I think it should have looked like to start with even though it’s required a £40+ upgrade kit to get there.So far so reasonable. 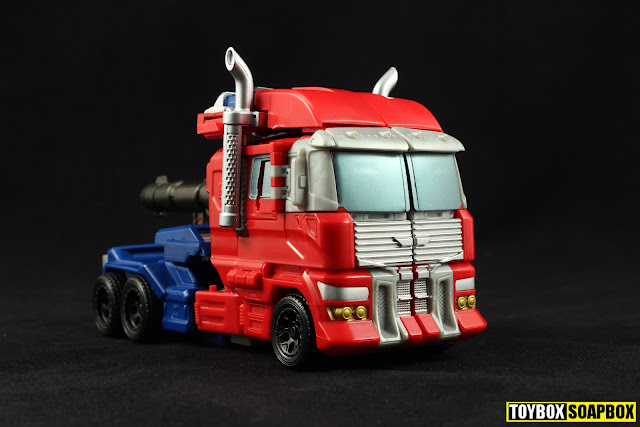 Getting into truck mode is not the simplified experience it purports to be. The actions themselves are not complicated like on SND’s mammoth set and Like everything else the idea’s are great – but the execution lets it down.

Chest panels rotate on ball joints and then flip over onto the back, or at least they are supposed to, however they tend to pop off easily. Same with the knee panels which are supposed to flip and rotate but are held by a clip hinge that doesn’t want to hold on like Wilson Phillips. Parts that felt solid and snug in robot mode suddenly begin to feel fragile and tumble off during transformation.

Beelzeboss’s knee extensions feature a hinge that allows each leg to slide backwards so those red pieces from hip act as a double clamp – but they struggle. His pesky grey hip panels that like to fall off? Yep, back with a vengeance and clearance is so tight that it’s easier to just remove and leave them to one side I felt like I’d been involved in a particularly cruel game of Buckaroo. 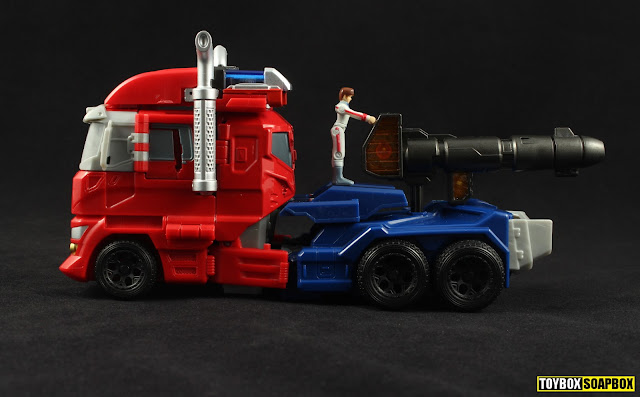 Once you’ve taken a break, had a drink, kicked a cat (don’t really do that) and made peace with your frustrations, the truck mode sitting in front of you looks better than it ever did. Prime’s signature smokestacks get roided up, and the chest armour has folded down into a non intrusive wind vane which feels like it completes the truck. As repeatedly stated, I am a traditionalist so am into the rolling square Prime but if you are going to update Prime – this is how you do it.

Having the knee panels sit on the back doesn’t sound ideal but actually they ease the stretching out of the back end of the cab by adding bulk. It’s a visually appealing truck mode but due to it not locking together properly what you gain in looks you lose in stability.

Oh and if you are wondering, you can still sort of get an unintended combined mode but it isn’t pretty. It’s more like something you can do than something you should – remember the wise words of Dr Ian Malcom. 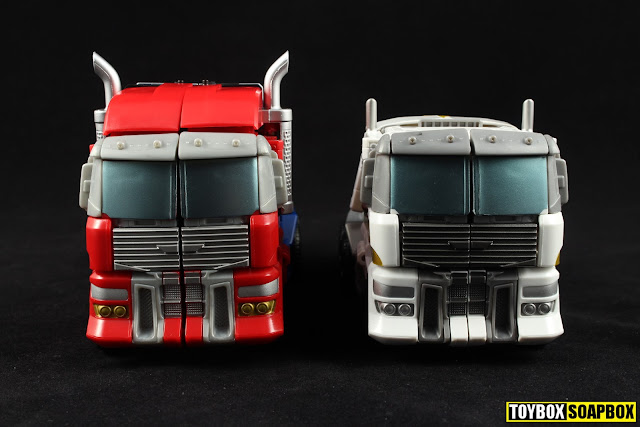 If there were an elephant in this room, it’s name would be Primo Vitalis, and it would have SND stamped on the side. Competing for the same space, they both take a different approach at doing essentially the same thing – upgrading Combiner Wars Optimus Prime. But where SND focused on transforming (sorry, again) everything about that figure and making it do things it was never meant to do at a cheap price, Beelzeboss were preoccupied purely with aesthetics and didn’t spend enough time focusing on making sure QC was tip top. A ludicrous thought considering it’s been over a year and a half since it was announced.

Can’t argue that it looks lovely in both modes but once you start touching it the illusion begins to peel away. Robot mode is very nice and avoids most of the problems but transforming it and trying to get the truck mode stable strips away Combiner Wars Optimus Primes core conceit – to be quick and fun to play with. Plastic isn’t of a great quality, pegs and joints are too small to work properly, the feet it badly needs aren’t included and the price is feels higher than it should be for the quality. I don’t regret purchasing it, many of my complaints aren’t a huge deal when viewed in context and don’t diminish it,  but I can’t help but think with more thought and effort it could have been perfect and for the price and time we’ve waited – it absolutely should have been.

Currently listening to: The sound of silence. Speakers have stopped working.