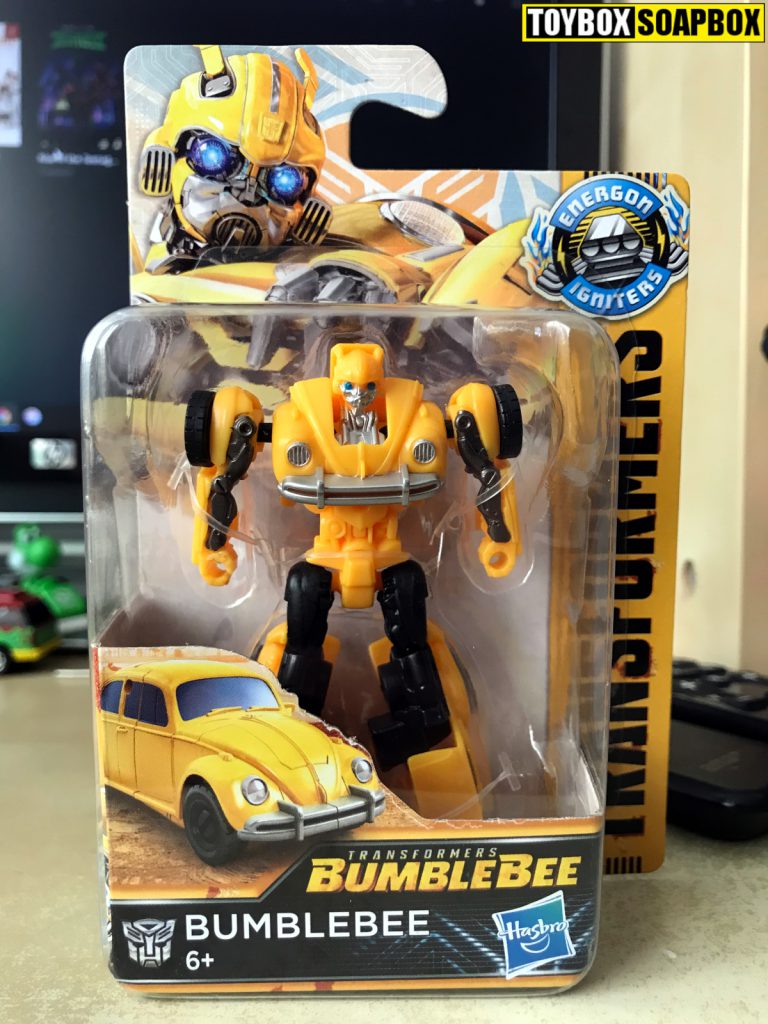 A new Transformers movie on the horizon means a new toy line to accompany it. Usually this isn’t something that would do a whole lot for me as I tend to let the live action films, and their accompanying Star Destroyer scale of merch, float on by. I am by no means anti the Bay movies. I loved the first one and I appreciate the life they breathed into the brand yadda yadda blah blah blah. So yes, not a fan of any of the sequels but I accept they exist and have their audience. However this time, things are quite different. Everything has been re-designed, Bay and his sophomoric pals are out and there is a feel good factor sweeping the brand that is more inclusive for fans of more than just explosions, toilet humour and big name actors chewing the scenery.

I am excited enough to buy toys. And take pictures of them. And write about them. 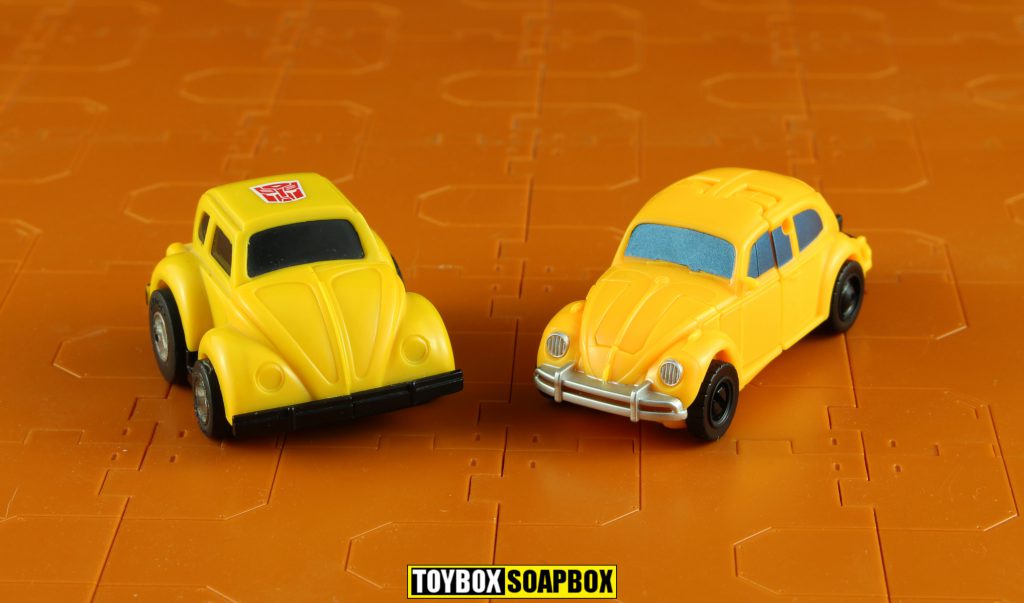 Bumblebee returns to the sanctuary of his vintage VW Beetle form. For it’s part this toy captures the humble, unassuming personality of Bumblebee far more than a growling muscle car does. The Volkswagen Beetle is one of the most iconic vehicles in history, far more so than a car that was only really relevant to the USA. 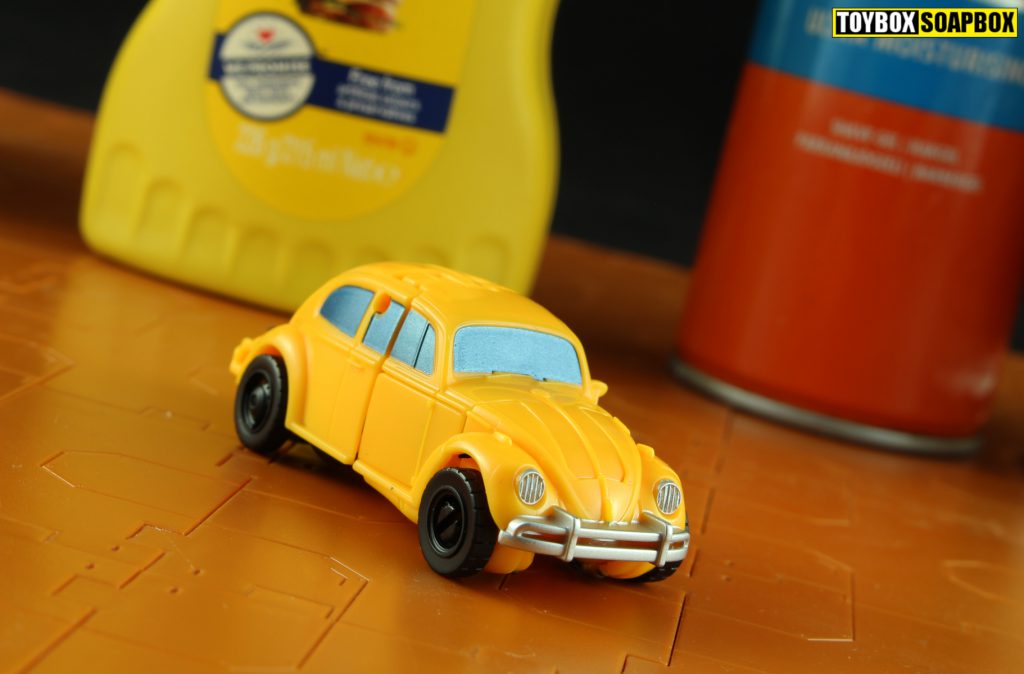 It’s more realistic than the vintage toy but still glowing with charm and a cheerful demeanour. Oddly there are no Autobot badges anywhere to be found, perhaps he’s worried that kids will want selfies. Even though camera’s didn’t lend themselves to selfies in the warm, snuggly nostalgia blanket of the 1980’s. 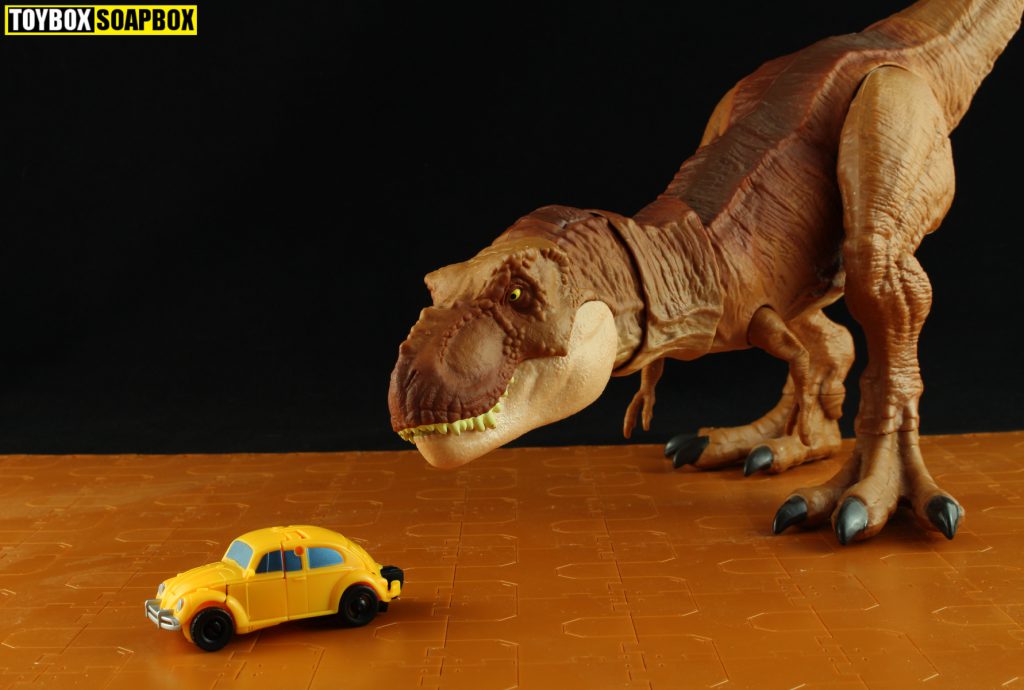 Should you have the Igniter mechanism that seems to come with the larger toys, and looks like a really fancy vaping device, you can plug it into the small port on the vehicles rear (yes, I know) and it will cause Bee to be zoom along whatever surface you have on. Or you could use it like a pencil topper that you used to get in Shreddies. 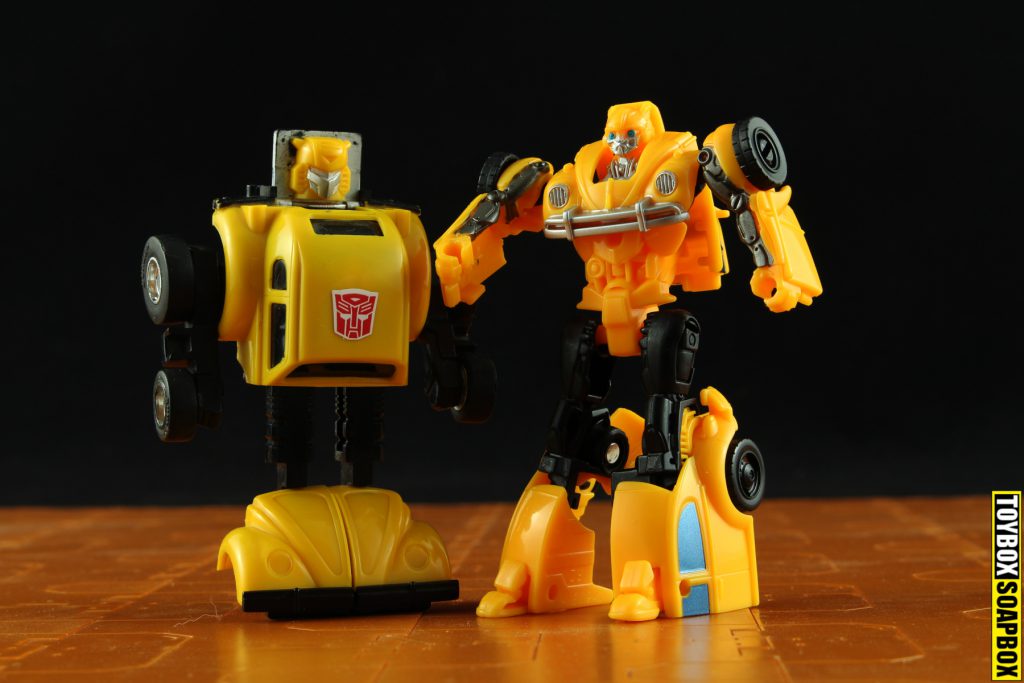 As a legion class toy the transformation is designed to be so simple you can do it back and forth as an alternative to a stress ball. It still finds room to surprise you though, with actual feet that flip out. A feature rarely seen on Transformers of this scale since…..well….never really. Usually they just get vague molded stumps, but mini Bumblebee comes equipped with Reebok Pumps. 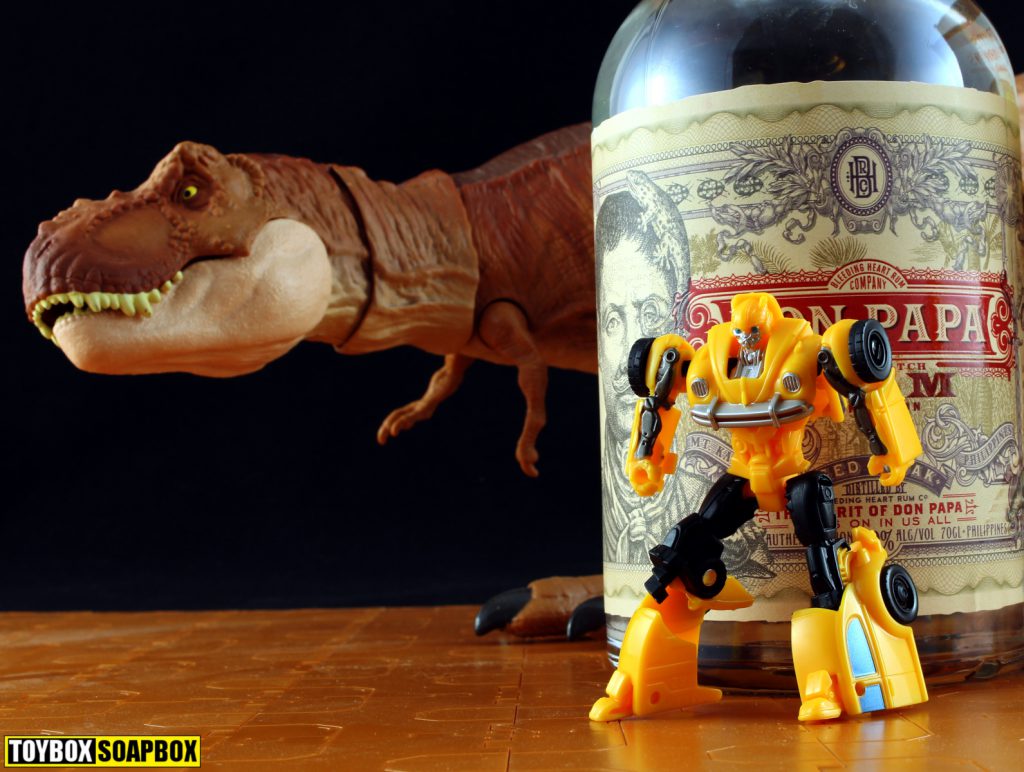 Robot mode is a mix of the weird skeletal ghoul Bumblebee you know and love/hate from the movies, but with with a new vintage G1 style outfit. The lack of shattered pieces of metal helps from a visual standpoint to give him a much easier on the eye look. Like, you can actually look at it without straining your eyes as if it’s one of those old magic eye pictures. He may not be a schooner but he does manage to achieve something his bigger brothers in other classes can’t – no door wings! 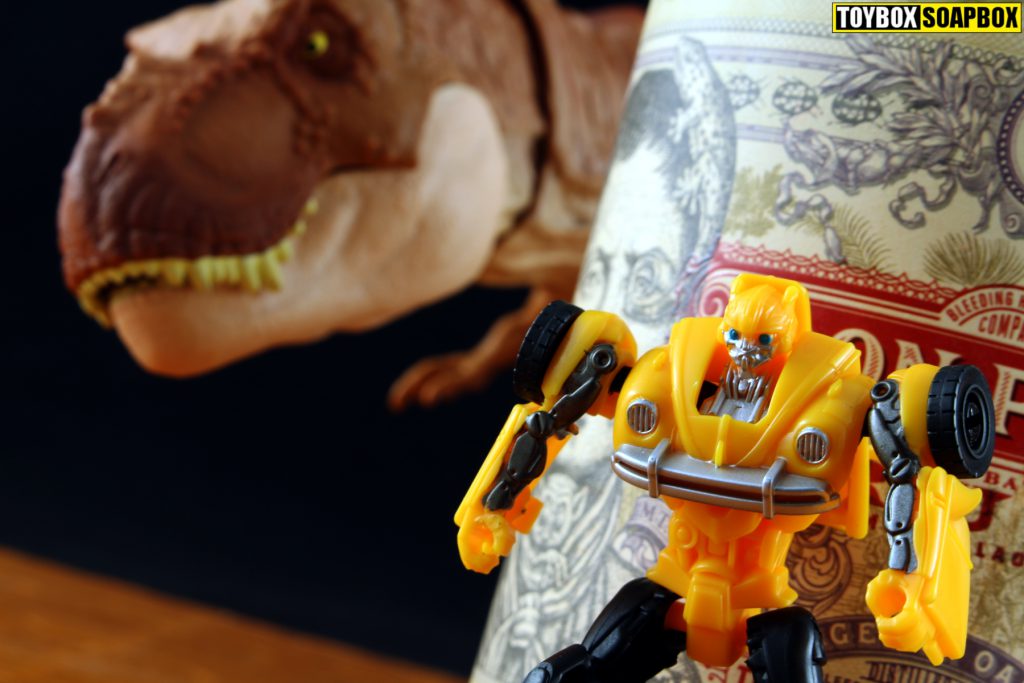 07 movie Bumblebee’s “bondage faced skeleton” head sadly seems to have made the jump over from the Bay movies to this otherwise eyesore free wonderland, but it’s less egregious at this size even if the silver paint and serial killer stare blue eyes try their best to grab your attention with a sort of cutesy Shao Khan look. Or little Jimmy Somerville. 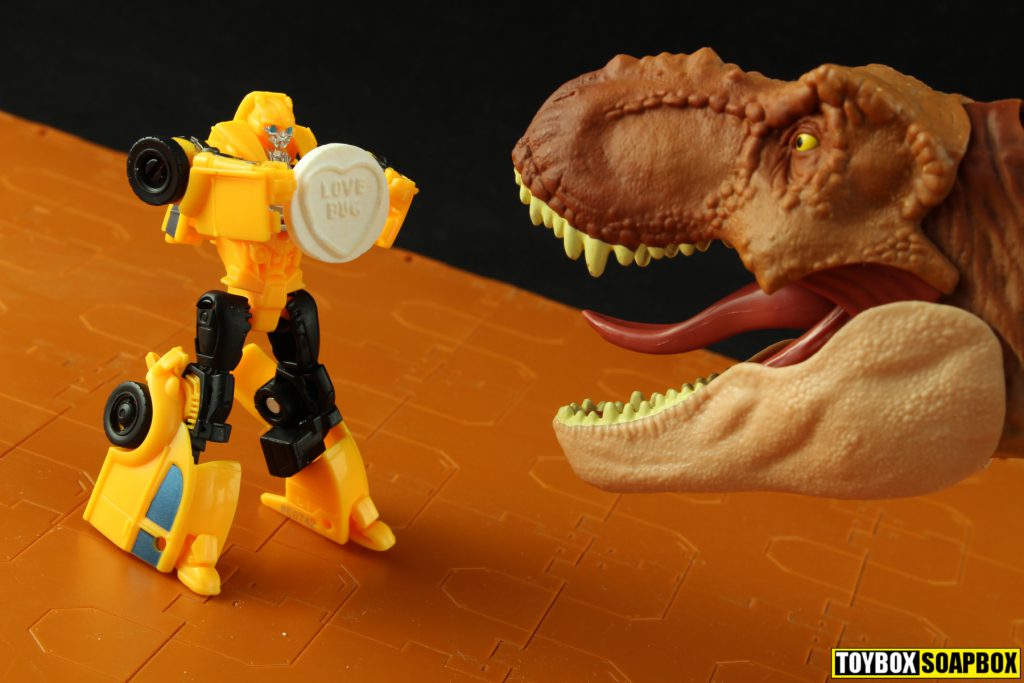 Articulation…exists. It’s not going to set the heart racing, but he has ball jointed hips and shoulders, knees that move and even forward foot tilt. Elbows would have been welcome, but I feel like I am already stretching my luck by it not looking like a horrible mess. Take the win, man. 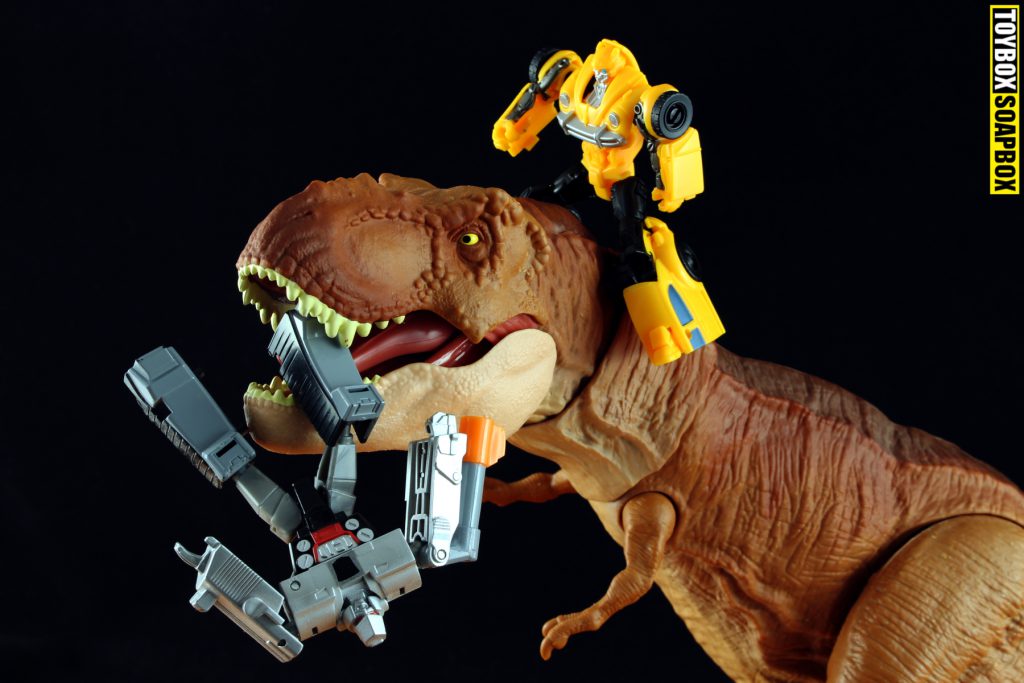 It should be fairly obvious to anyone who has ever read this site or spoken to me in any form that I do not like the movie designs. I wish I did, but I can’t help that Michael Bay and his Injustice Gang took their inspiration for the previous movie designs from the inside of a rubbish skip they found out the back of an Ikea. Where the Bumblebee movie designs succeed for me isn’t that it’s “more G1”, it’s that it’s dialled back the horrible, undefined messiness that was paraded across movie screens before.

A far more inclusive tone seems to be in effect with a warmer feel, actual characters and no determination to subvert previously established ideas for the sake of explosions and the cheapest, lowest brow of humour. I am all for re-imaginings and different interpretations but it still has to look better than car parts being hung off a vague robot shaped Christmas Tree, after going through a blender. Of course, this is all going on trailers and there is plenty of time for it to go horribly wrong but so far the toys are nice and inspire the warm fuzzy feelings inside that Bumblebee should.