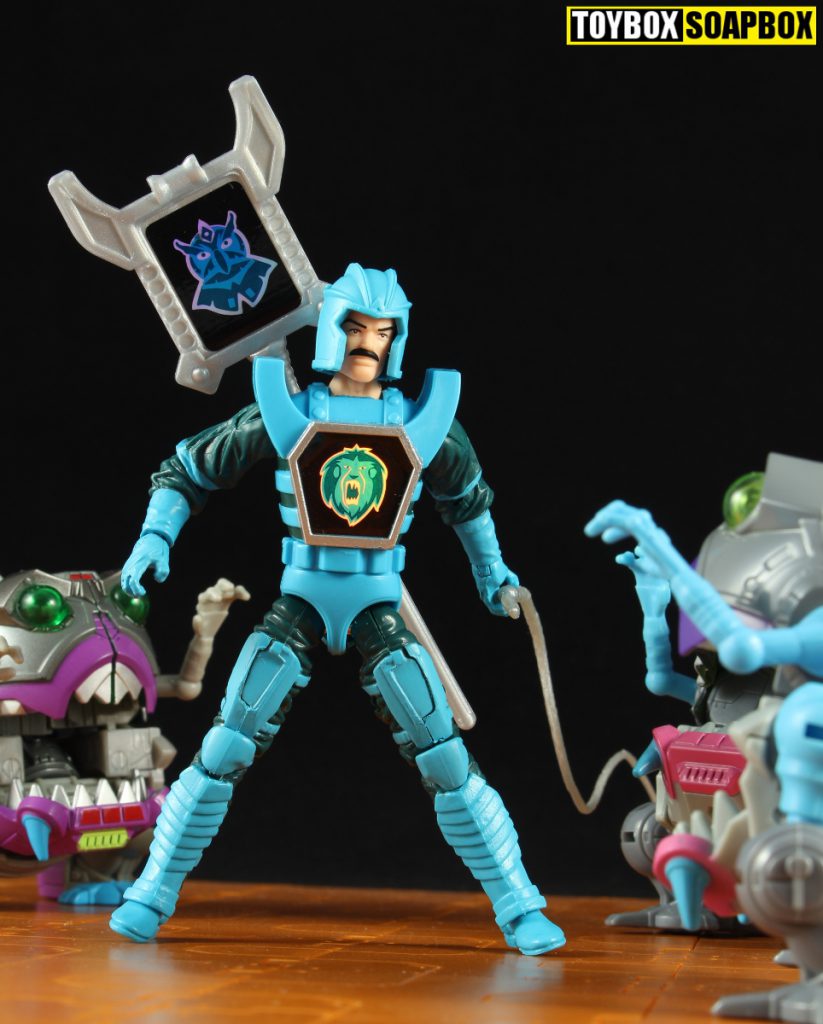 Of the many 80’s toy lines that have made a comeback there are a couple of notable exceptions that have maintained a position in the void of hyper colour. Starcom is one I will shout about to all who listen, and many who won’t, but another is Visionaries. Remember them? Technicolor magical knights with holograms on their chests? I loved the Visionaries from the toys, the cartoons to their brief cameos as back up strips in the UK Transformers comics – I was hooked. The premise is still something that captures my imagination to this day. Technology stops working one day and the world reverts to medieval ways, as magic takes over. I was hooked on this as a kid.

Since the toyline died away, pretty quickly unfortunately, there has been nary a sniff of Visionaries anywhere. There was a Mighty Mugg…thing…but that’s your lot. With IDW set to launch a brand new comic series, Hasbro took the opportunity to whip up an all new Leoric figure to fill out a boxset of exclusive figures at SDCC. None of it interested me – except for Leoric. BECAUSE HE’S ONE OF THE FRICKIN VISIONARIES. 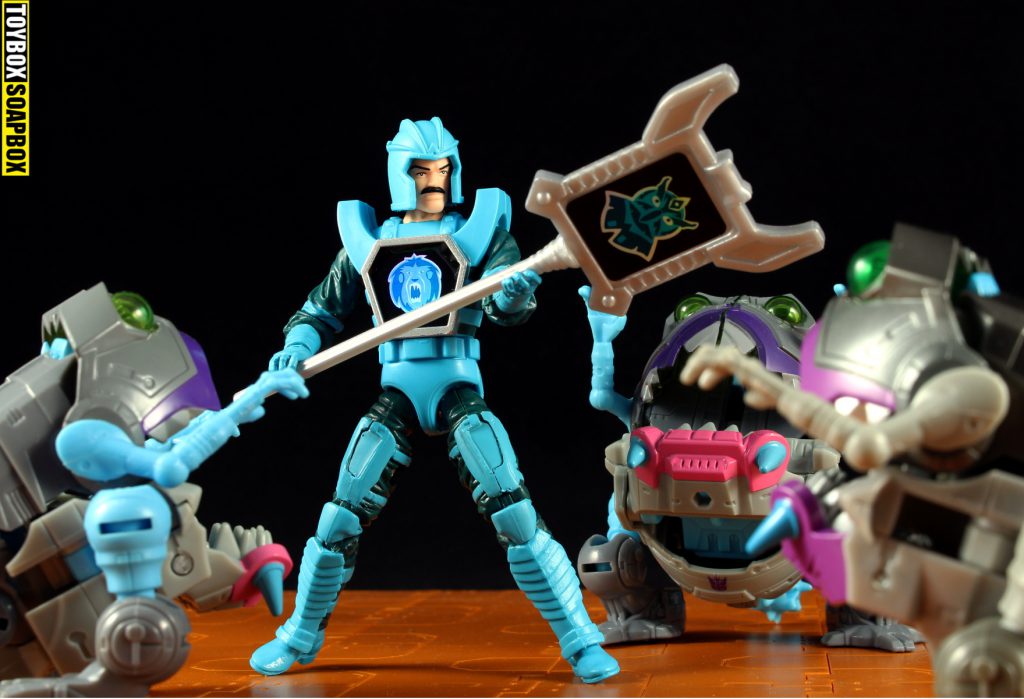 Leoric was the leader of the Spectral Knights, the good guys of the Visionaries series and as such pretty much your standard 80’s good guy. As the leader,  his animal totem is something associated with pride, power and a badass mother who don’t…whoops slipped into Cool Runnings mode there. Leoric gains the power of a Lion, because “LEOric”. 80’s characters tended to have names that reflected elements their character and personality. Much like how round here people associate the word Rum with “Liam”… I guess. He’s not the most interesting of the characters, all of whom are pretty ace, but he’s the main one so he’s the guy who gets the first figure.

The vintage toys central hook was that each of the figures had holograms on their chest but in 2017 that is replaced with a shiny sticker featuring a cartoony looking lion. Technically it’s cartoon accurate, the Lion motif is very close to its animation counterpart, which is all the rage now, but the Visionaries most iconic feature was the holograms so it’s a shame to see them left out of any resurrection attempt. 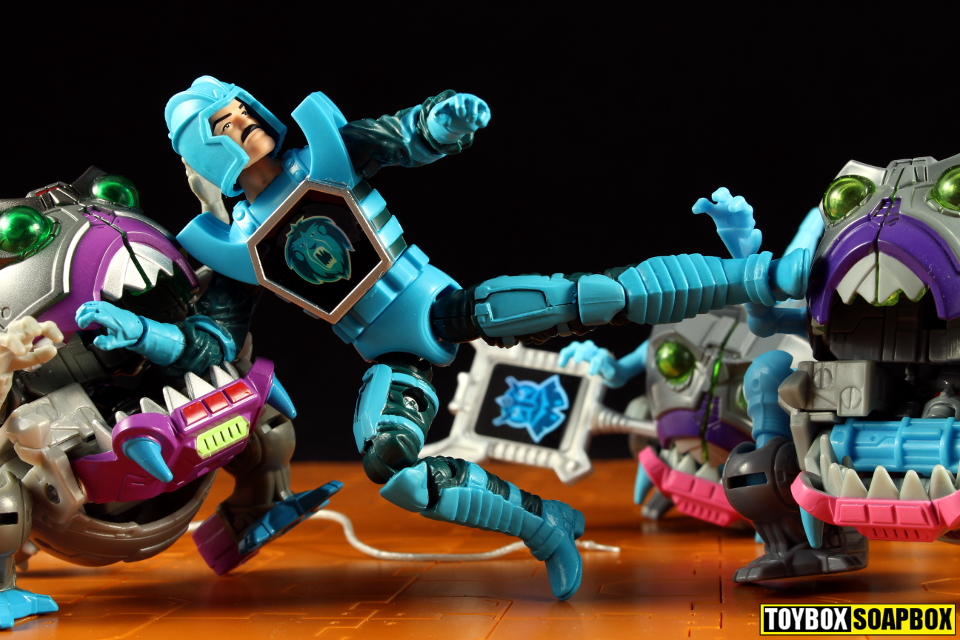 Leoric is the first Visionaries action figure in three decades and not being part of his own toyline he borrows from the GI:Joe line. There may even be some shared parts from the remains of GI:Joe figures but much of it is new and unique to Leoric. Unmistakably he rocks the classic knights in Skittles colour armour that the Visionaries were famous for and it’s such a stunning look. Recently, IDW have redesigned the Visionaries with “updated” looks but as is often the case, updated just means different and not as cool. They all look unique, but the charm of Visionaries was that they were all knights so had armour. The new versions all look sort of, I dunno, like free climbers?

The detailing on the legs is different to Leoric’s vintage toy and character model, so perhaps they came from somewhere else but it’s close enough that it could also be a case of it simply being a more detailed interpretation. Who knows, or really cares? The arms and legs look more like fabric, rather than the lined armour like originals and it gives him a sort of Kryten vibe with the solid chest. 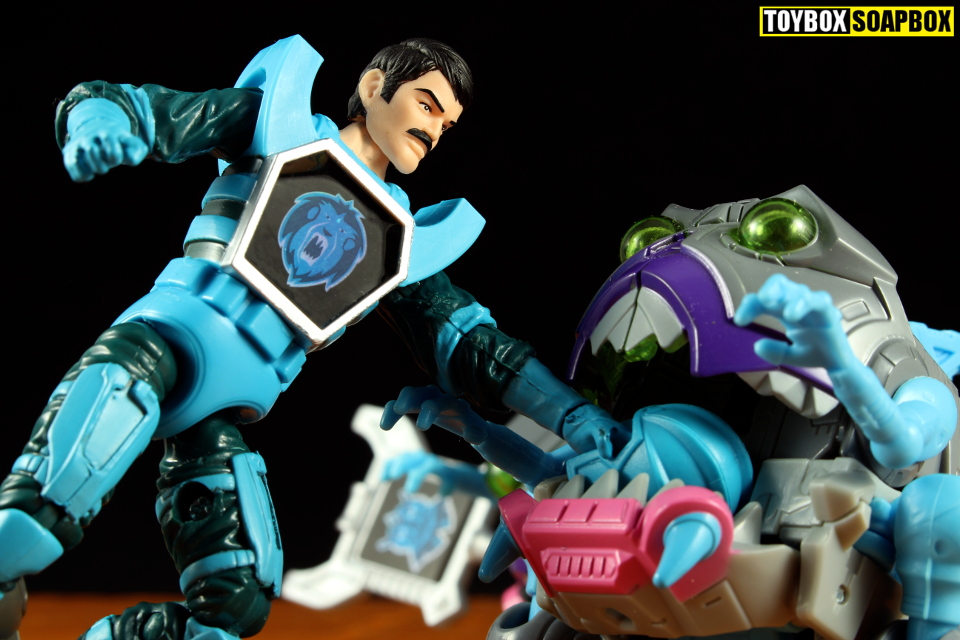 Style, size and articulation all originate from the GI:Joe line which explains why he has such awful hands that are incapable of gripping any of his accessories. The articulation is alright but he lacks the ab crunch the originals had, by virtue of being held together by a rubber band. The only part of the armour that is removable is the ill fitting helmet and that reveals the head of Burt Reynolds. Perhaps old Bandit is trying to smuggle magic instead of beer this days.

Sheriff Buford T. Justice would make an excellent Darkling Lord, of that I have no doubt. 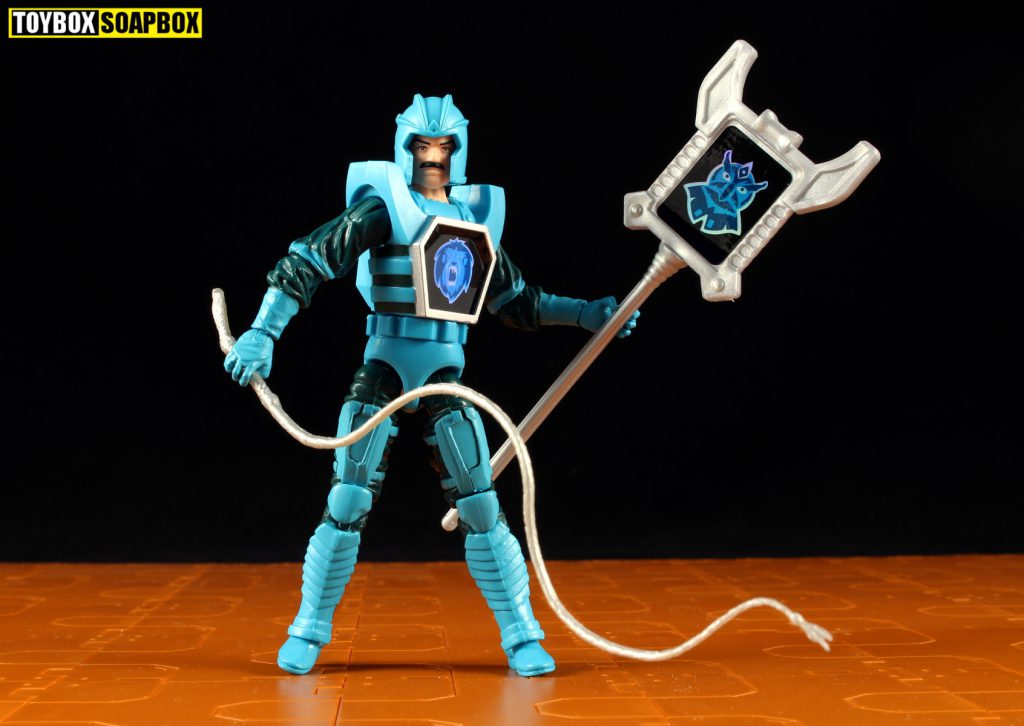 Included are his trusty whip and power staff as well as a small display base that is so obviously stolen from GI:Joe that it’s shaped like a dog tag with a Cobra logo on the reverse. The power staff features a shiny sticker just like the chest, but this time it’s an owl to signify wisdom. In order to access the powers contained within their staffs, the Visionaries had to recite a spell. For Leoric this meant saying “Whispered secrets of a shattered age I summon you, renew this sage.” Then the owl would appear and either offer him help or sometimes take a sly dig at him. An owl trapped in a stick still had sass.

Sadly the Knights of Prysmos must not have evolved a strong pincer grip because he struggles to hold either weapon. 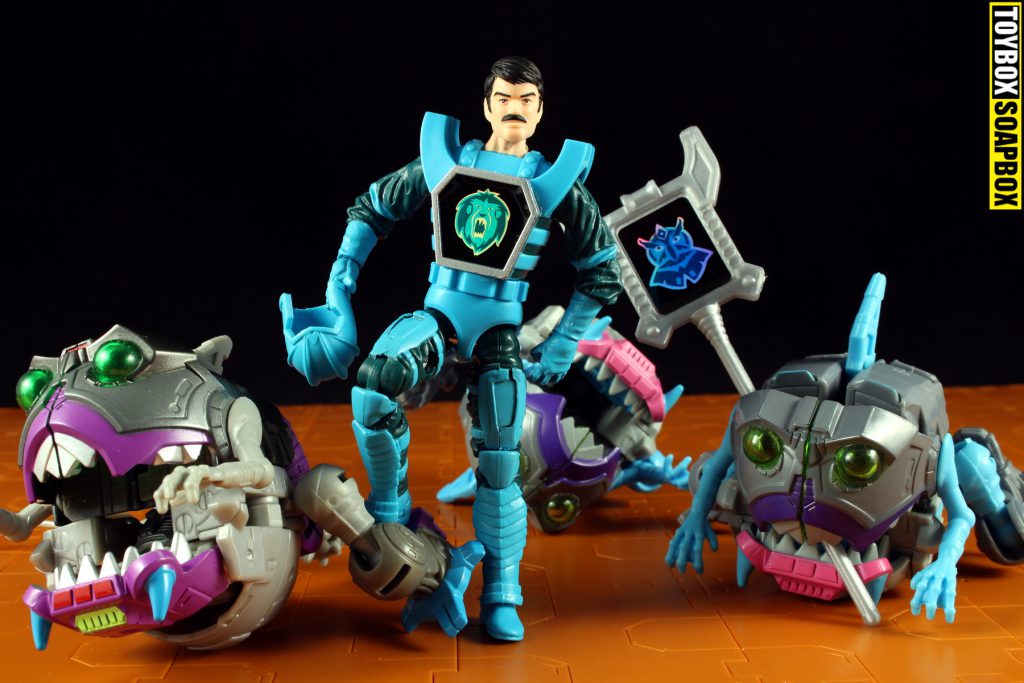 The first Visionaries action figure in three decades (I don’t count Mighty Muggs) is far from perfect but it’s a great little representation of Leoric and it’s just exciting to have any new Visionaries products at all. Whilst I had to pay a premium to get this figure on it’s own it was worth it to get a cool modern figure from a series I loved as a kid. I haven’t emphasised enough in this article just how much I love Visionaries and the lore behind it, normally I’d be talking about every aspect of it, because this is a small figure and just a starting point. But rest assured I will return to it at some point when I talk about the vintage toys.

I hope this is not the only Visionaries figure we see for another thirty years.