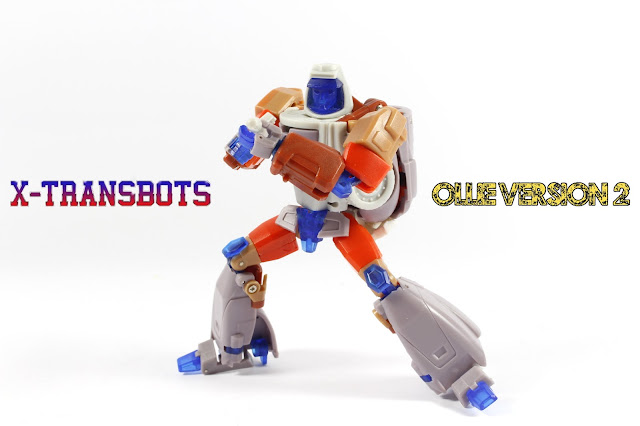 It’s almost two years since I reviewed Ollie. X-Transbots take on a Masterpiece styled Wheelie, came and went in a hail of criticism, flimsy plastic and broken dreams and whilst it was a decent figure, it felt like an almost criminal waste of some fantastic ideas.

Fast forward (classic 80’s VHS tape static lines and all) to 2016 and X-Transbots have taken Ollie back to the drawing board in an effort to do the wee rhyming fella justice.

TFS Express kindly sent over a very early prototype to demonstrate some of the improvements, which we are going to be taking a look at today.

Roll tape! (or just read on)

Please keep in mind that this is a very early prototype so is in no way representative of the final product. Things will change. Lots of things. 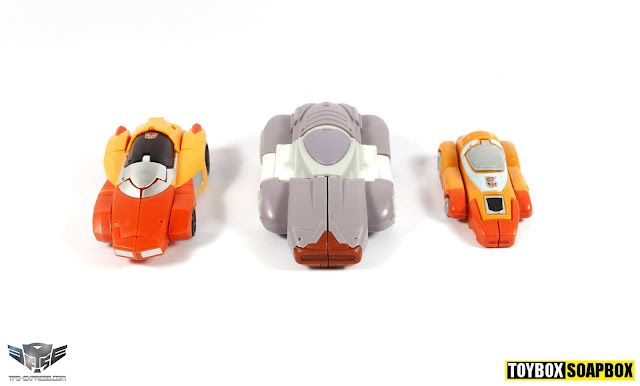 *In best Admiral Ackbar voice* As you can see here…Ollie’s alt mode is a Masterpiece scaled version of his original G1 futuristic mini car.

Wheelies car mode was never based on anything real, it showed up first in the movie where the Transformers cartoon timeline jumped forward 20 years to the magical, jumpsuit wearing, hoverboard flying future of 2005. X-Transbots took their inspiration from Floro Dery’s single seater, futuristic go kart animation model.

The colours on the prototype are beautifully bonkers and call to mind the season 3 episode the killing jar. Course, these are just for the proto and are nothing like what the final release will look like but there is something fantastic about the almost mauve colour that looks like old chewed up chewing gum, mixed with the hyper saturated jolly rancher orange and sugar cube white. Look at those lovely puckered up, Joker mobile lips on the front of the car too. Glorious.

Wait till this guy gets to robot mode – there’s enough clear, coloured plastic to make even TFC blush. 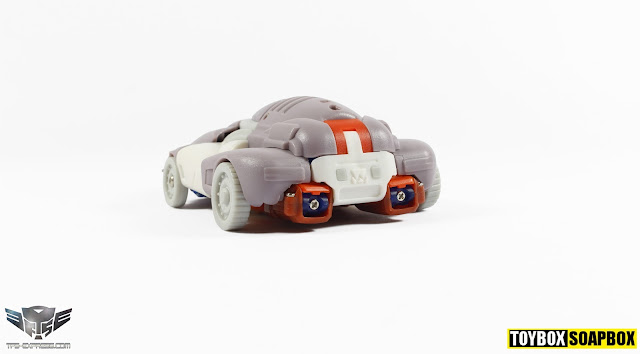 X-Transbots v2 Ollie’s rear end has a new reinforced panel made from thicker plastic to prevent it from possibly shearing off, which may probably have been a thing on the original. Right now I am kicking myself for selling my Ollie, because it’s tough to recall all of the problems the original had.

On the robot mode most of the changes from the V1 are highlighted in clear blue plastic, but in the alt mode it’s white to point out where parts have been made from thicker plastic. That’s the running theory (created entirely by myself), but in truth there are more improvements across almost every part of the toy.

For instance, the arms have always been visible as pseudo exhausts at the back of the car, but previously it was left to gravity to hold them in place which was a nightmare if you got one with floppy arms (I did). To remedy that, on this prototype, small pegs have been added to Ollies forearms with the idea that they tab into corresponding newly added peg holes on either side of the car. It’s a great idea, and will make a big difference but on this test shot the peg holes are too small for the pegs to fit in, so you can see them slightly forcing the rear panel out of position.

I’m fairly confident XTB are going to fix that, as this is a really early proto which is designed to pick up exactly these sorts of issues. 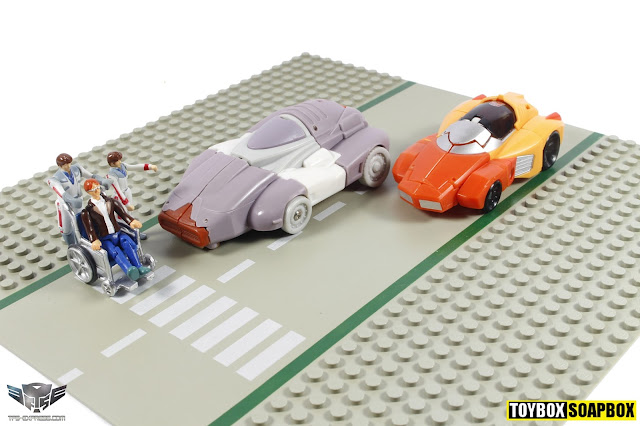 Ollie is intended to look as close to the Floro Dery designed animation model as XTB’s designers could possibly get, but had some extra width to alt mode that comes in handy fixing one of the most infamous problems with the original Ollie.

For V2, X-Transbots have used much thicker plastic on those folding horrendous folding side panels (highlighted conveniently in white) and they no longer do you feel like you are disarming a ticking time bomb – ready to crumble in your hands. You still have to bend them round the body, but they are so much thicker  and forged from strong enough plastic that it doesn’t feel like a fuse is burning away next to you 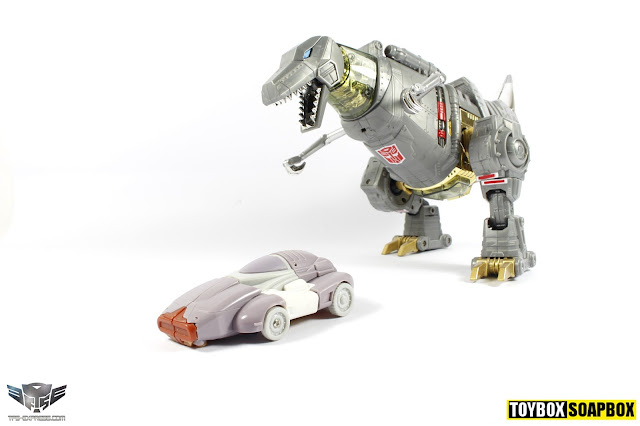 The canopy being clear at first sounds good, until you realise there is no interior to look at – just squished body parts like the head. I am praying to Stan Lee that XTB are planning on including multiple options here because otherwise it’s going to be very distracting looking right into Ollie’s gaping chest hole in robot mode. Even Hasbro opted not to do that with the recent Titans Return release.

On the wheels, well on this prototype they are screwed in place rather than pinned (they still spin fine), but I would hope that is purely for the sake of putting this mock up together. 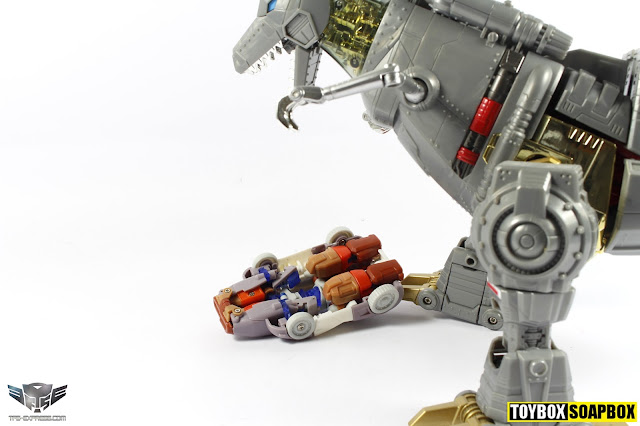 So, Ollie’s car mode then-  better than the original? The same? Worse? The improvements on this toy are mainly for robot mode and the transformation, but you still benefit from arms that should tab into place and also the stronger side panels feel more secure.

There’s nothing dramatically different about the car mode in terms of looks, and whilst XTB are promising a new clear canopy and some a new Turtle Wax finish – it’s not the point.

What comes next is what is important about this new “remastered” Ollie. 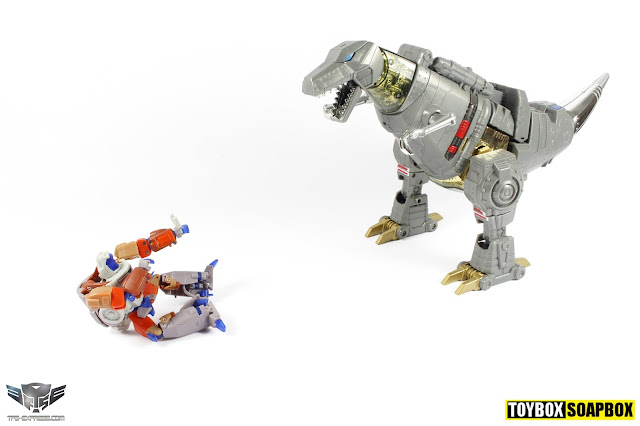 Ollie’s transformation becomes something totally different once the fear of breaking, and need to treat it with extreme care is removed. Nothing has changed in terms of the steps, but the more robust materials make it feel so far from removed from the original it’s like Subway vs that banged up plain Cheese sandwich you find at the back of the Sainsburys fridge on your lunch break that has a suspicious “CLEARANCE” sticker on it.

Aside from those pesky side panels, the sliding mechanism inside the backpack also feels more durable. There are now small lips on his wrists that make flipping the hands out far less of a hassle and I didn’t have to use a tool once.

Everything about this new version of Ollie feels focused on ensuring that the transformation is a satisfying task and something you can do over and over again. You know, like because it’s a Transformer. Amusingly, the bulk of the target audience will really want these fixes but still only
transform it once and plonk it on a shelf to eternally gather dust. 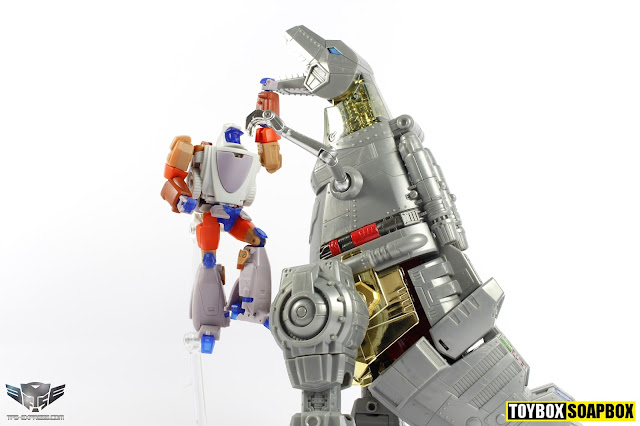 Even in bonkers Saturday market stall colours, this test shot of Ollie still looks every bit the Masterpiece Wheelie. All of the details are there to an insanely faithful degree that never compromises the design – unlike the original.

So what’s new? Well I believe the blue face is an indicator that young Ollie here will be coming with an alternate face. His original figure only came with one expression, but in 2016 almost every figure comes with a bag full of faces (boom yeah, Jon) that they can rotate at random in homage to Hannibal Lecter.

Fingers and elbow joints also appear to be in blue but I am not sure what the difference is. Perhaps the changes are purely for strengthening purposes? I know, you don’t know either and you are reading this article to find it out.

Sorry – research fail. The list doesn’t mention them specifically but there is a mention of “stress mark proof refinement” – so perhaps that’s it? 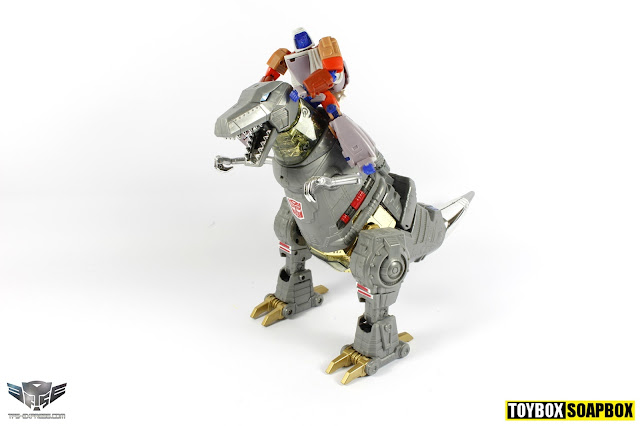 The most stand out change, in terms of functionality is the all new hip panels. On Ollie V1, these were outrageously crafted as a single piece which inexplicably blocked all forward leg movement. One of the most baffling design decisions I have ever come across on an action figure has thankfully been corrected with this Version 2 and he can now move his legs forward.

Combined with the thickened plastic to make the transformation better, this is the second most important change as it opens up a huge range of possible poses and removes one of the originals biggest restrictions.

Apparently diecast is going to be added to the thighs, which should stop Ollie from feeling so light and cheap and hopefully further boost the balance of the lad. 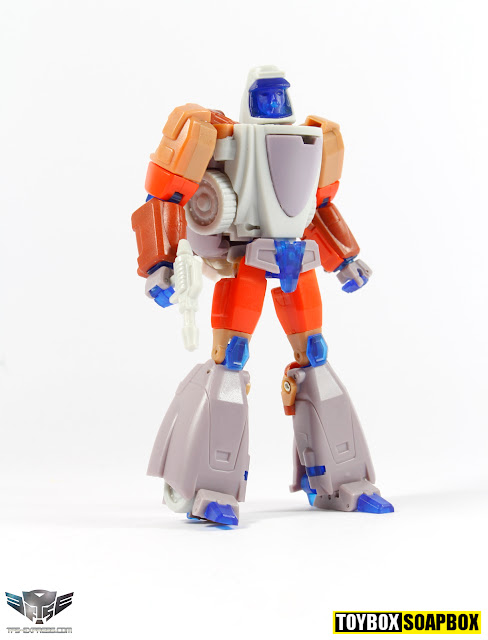 Moving downwards and there are further important upgrades. The knee caps have been redone to allow Ollie’s knee to stand fully straight which not only makes him ever so slightly taller, but it gives better balance by bringing his balance further forward. Ollie MK1 couldn’t straighten his legs (without mods) which lead to him always slightly leaning back. Never good for the old equilibrium.

Down around the ankles it looks like X-Transbots have some plans for the feet but honestly I can’t tell any difference beyond the blue slippers, and I wonder if they will be replaced with metal for some extra weight? 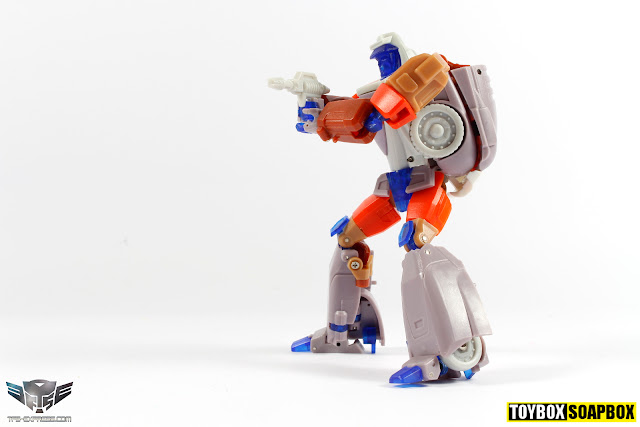 Heel stabilisers have been added to the back of his ankles. What’s neat about these is that they aren’t traditional spurs which would stick out of the back of the heels. Instead these sit just inside his legs and provide a larger base for him to stand on and benefit from the balance gods, without any impact on his sleek aesthetics.

On Ollie V1 , gravity was always his arch nemesis, trying it’s best to pull him backward, so it’s nice to see X-Transbots make such an effort to address this at all levels rather than just one token addition. 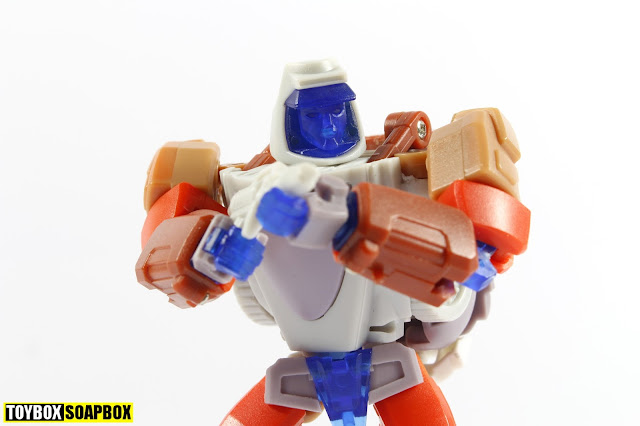 The same two accessories are provided in the form of a gun and his signature sling shot. Here they are moulded in off white plastic but there is nothing different in terms of moulding, and I expect the pair to come fully painted for the final release.

Chuck in a mini elastic band for the slingshot guys! 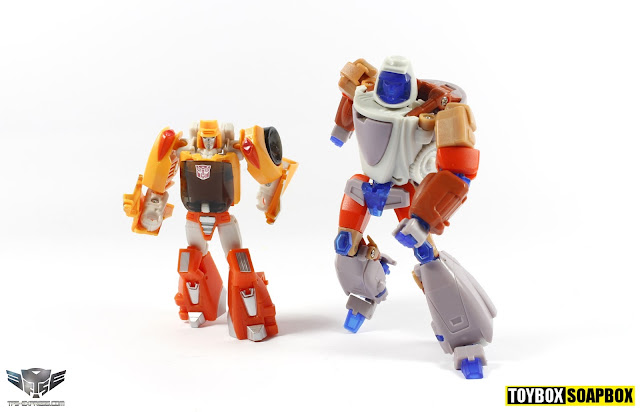 This article was never meant to fully review Ollie V2 as this is just a very early prototype that will change a lot. It merely exists to highlight some of the changes from the much maligned original.
For a loose prototype, that is supposed to point you in the direction of what a final product may be like – I love this thing. The improvements all make a huge difference, and crucially it makes Ollie a very fun figure to mess with and pose. So that being said, I’m probably going to buy it.
If you were skipped the original and are on the fence, then the changes could be enough to sway you as they fix most of the afflictions poor Ollie was indeed cursed with.
Let’s be honest, if you already own the original then you are probably feeling the classic early adopter kick in the nuts of a better version of a product you paid a lot for now being released. Yes, the improvements should all have been present in the first place, some of them blindingly obviously so, but the original had so many great ideas and failed at the execution that I can’t help but be glad that this toy has finally seen justice done to it.
Especially when the changes are as big as this test shot suggests they are going to be.

Please do remember that this figure is a test shot, kindly provided by TFS Express,  so will be changed for final release.

You can also follow us on Twitter @ToyboxSoapbox , or press the +1 button on this page to follow us on Google Plus
Currently listening to: NAS – It Was Written