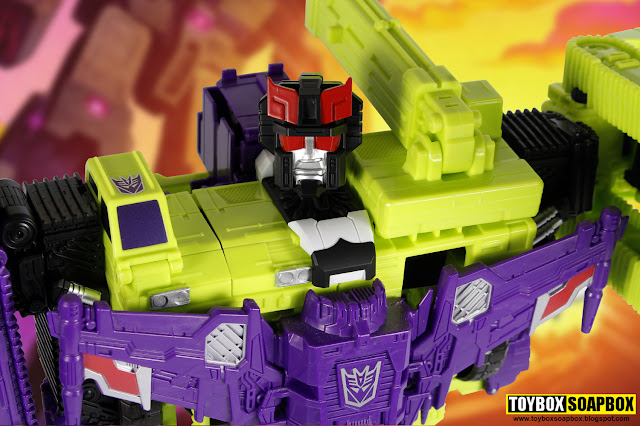 Regular readers will have noticed I love the heck out of upgrading my Combiner Wars figures. Hasbro get so close but sometimes they could do with a little extra nudge to get them over the line.

Perfect Effect have ruled the Combiner Wars upgrade kit landscape with several kits for each combiner released thus far, and even a kit for one that hasn’t. This set is one of two they’ve released for Devastator and features a few bits and bobs and the fabled cab cover that should cure Mixmaster of his “I make a tiny foot” affliction.

Keep reading after the jump to see the review 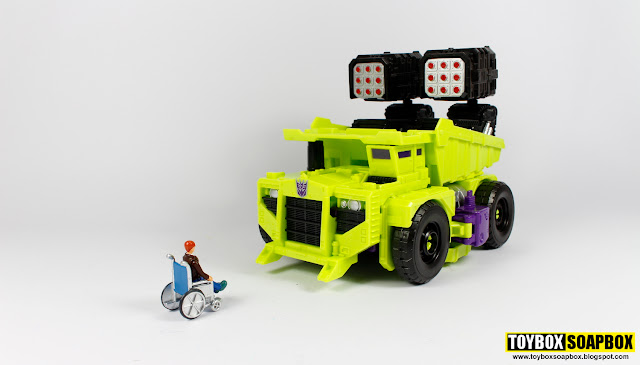 Hasbro designed the combiner forearms to fold up unto rocket launchers and plug into Long Hauls truck bed in alt mode and Perfect Effects PC-06 upgrades still follow this same plan but add a slight twist. Having included shoulder extensions, they have to go somewhere when not extending sir green and purples arms, and here they sit in the truck bed underneath the rocket launchers adding height to make them more viable as weapons in this mode. 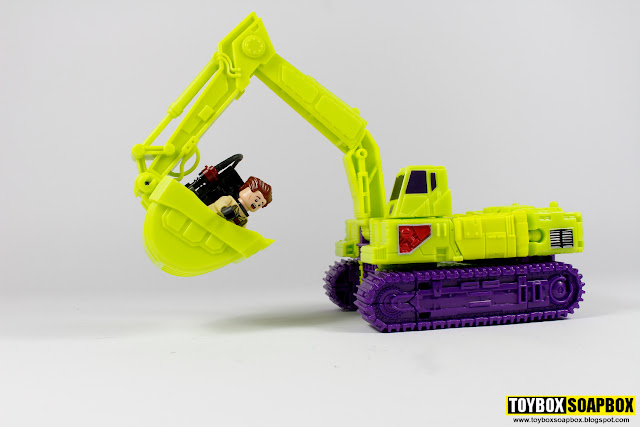 Needing a more articulated scoop must have been at the top of someones wish list – otherwise there is no reason for this to exist. Scavengers shovel pops off at the mushroom peg and is replaced with a much larger piece that has an articulated bucket. Sounds great, and it does look good, but for some reason Perfect Effect have made it larger than the original which means it is far more pronounced in the other modes than the piece it’s replacing. 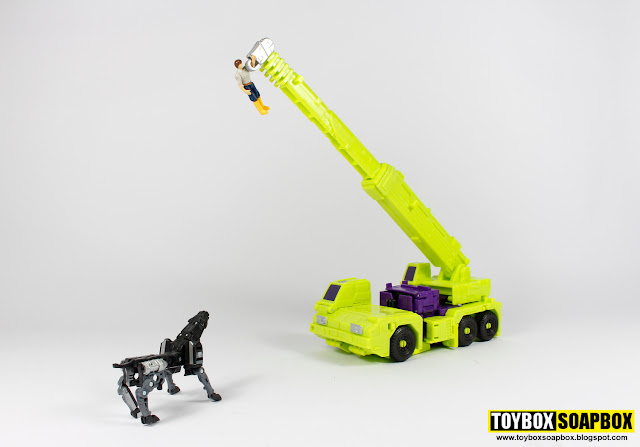 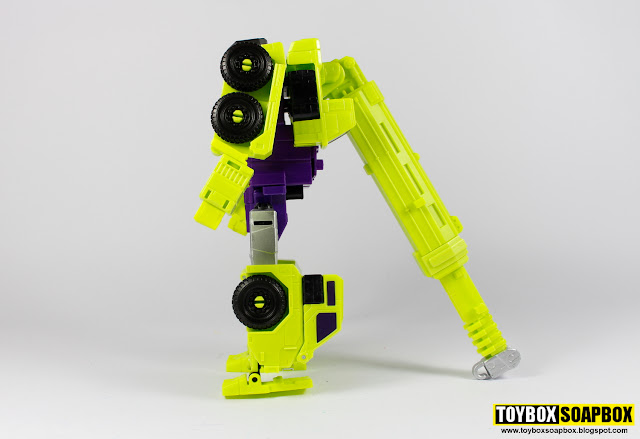 Adding a feature for the sake of adding it without fully thinking it through never ends well – and that is what happens here with Hooks extendable boom. Look at the picture above, in robot mode it is far too long and the nicest thing you could say is that it acts as a stand – but he already stands perfectly well.

If you don’t transform your figures then it jutting awkwardly out of Hooks back will make no difference to you – but then why would you need an extending crane?

This upgrade went right back in the box – it’s a no from me. 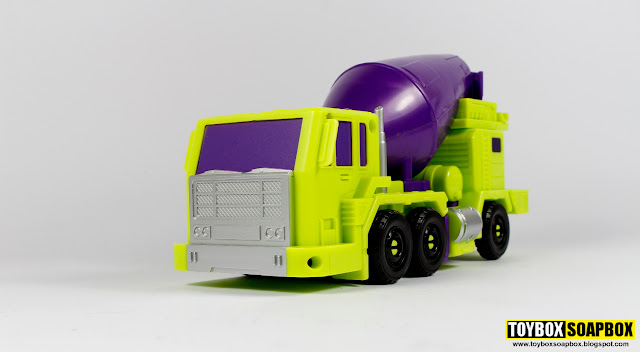 Let’s get to the real reason you probably sought out this article in the first place. The headline attraction of this set is of course the Mixmaster cab cover.

Since he was first shown, people have zeroed in the decision to make him so different to his G1 vehicle mode -and people cried foul (me included!).

Creating a new cab that slides over the back to the truck is the ingenious solution to wipe away our sad tears.It clips over the top, locking in very tightly and looks like it should always have been there. Mixer mode is improved massively and it works surprisingly well to say the truck is now technically back to front.

But this is the Mixmaster we all wanted and makes up about 80% of the value of the set. 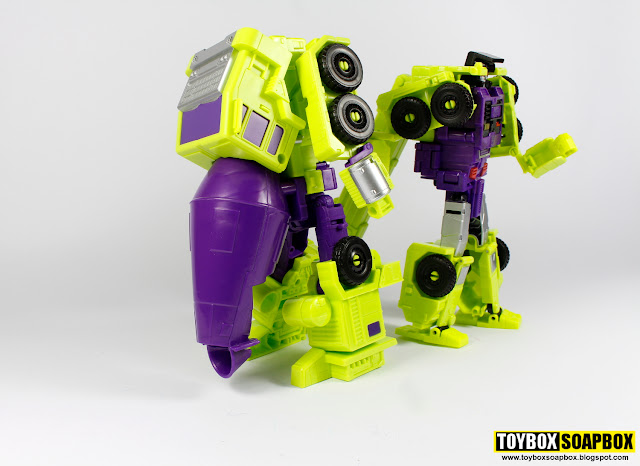 Where most parts of this upgrade kit work well in one mode, but fall down in another, the cab cover avoids this pitfall and even helps to improve his look in robot mode. Bee stinger backside is still there but the large cab cover hanging over the top goes some way to dial it back enough. It transforms with Mixmaster so you don’t even have to remove it.

I have said how great this one piece is yet? Well I am saying it again because it is. GREAT. 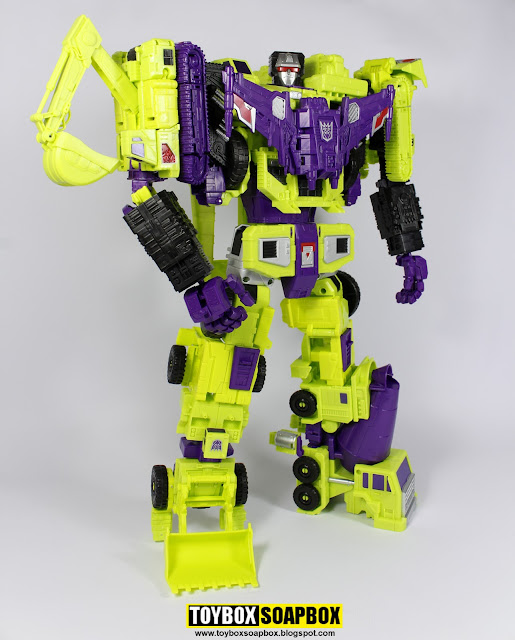 Bolstering Devastator is the main intention behind the kit and it tries hard to hit a home run. Mixmasters new cab is the most obvious change and it makes an enormous difference in not only curing his tiny foot syndrome but in adding extra width to give him a more solid footing. It looks fantastic and if I could just have bought this piece, I could have happily skipped everything else.

It is amazing, it truly is and Devastator looks way more impressive when he has a correctly sized foot.

Purple covers are provided for his legs in a token gesture to break up the mass of green, but you could leave them off and not notice. In fact – I did. 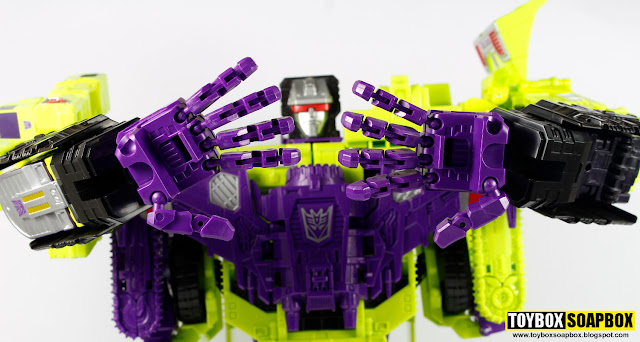 Purple, ball jointed fingers give him the ability to give you the middle finger and are a significant upgrade on his stock baseball mitts. Unfortunately there had to be some kick in the unmentionables and it comes in the form of poor floppy wrists. Replacement parts have been shipped out to retailers so may have to look into getting that sorted and save myself the effort of applying some Future to the joint. Each hand is attached to a new wrist block which is longer than the stock one that came installed on Devastator meaning his arms hang much lower – right down to his knees!

Devastators rifle slides into a slot in either hand to hold it securely which is then instantly wasted by the floppy wrist. Poor lad. 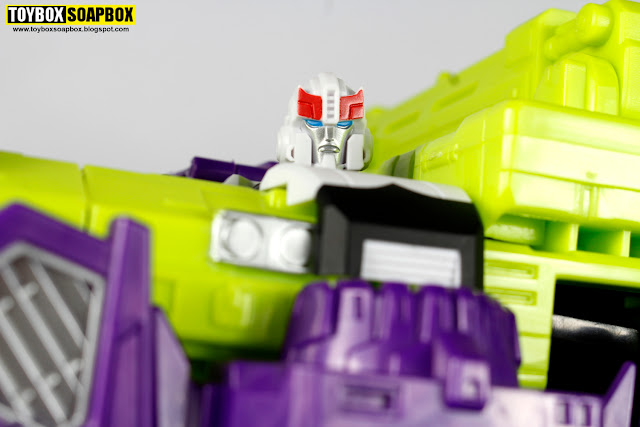 IDW recently gave Prowl a stint with the Construticons and Perfect Effect decided to bundle a little Prowl head (sans purple nose bleed) into the package. Yes it is a lovely sculpt and captures the IDW interpretation of Prowl to a tee – annoyed expression and all.

At first this seems like the most frivolous of additions, but it actually serves a functional purpose as a ball joint to sit within an even larger “Prowlastator” head. Even though there’s no chance of me using this, I can’t deny it looks wicked. Those awesome Red shades that are so different to Devastators usual visor, and then the classic Datsun forehead fins upscaled to sit a top a combiner head looks glorious. 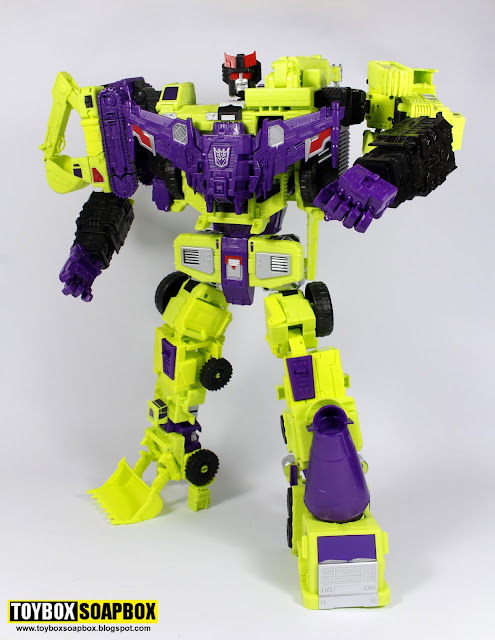 Most of this stuff could have been left out. Not all of the parts are successful, the extending boom for Hook only works in one mode and then hinders another, and the same is true for Scavengers “upgraded” excavator arm and I am not sure there was a big clamour for Prowl and Prowlastators heads no matter how cool a novelty they might be.

As a curio they could have been released separately for those who wanted them, saving people who had no interest and just wanted the Mixmaster cab cover and maybe the hands, some extra cost.

Easy as it is to moan about these things, that Mixmaster cab has done wonders for Devastators shape and I couldn’t be happier.
Well I could, but I am out of Rum.