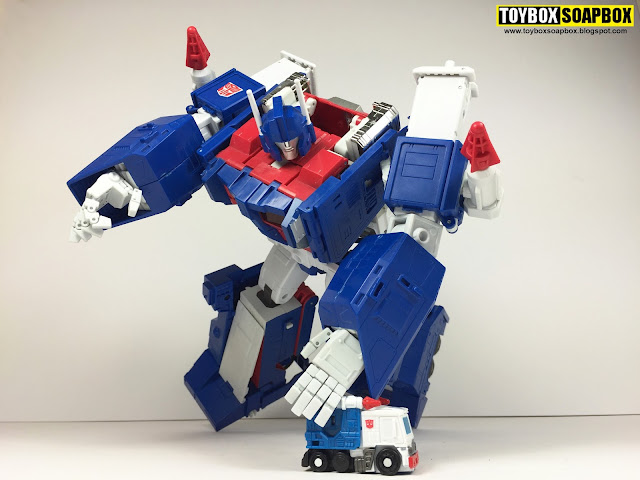 Across the oceans, in far away lands there are people able to walk into shops and buy cool little curio toys for little more than the cost of a Greggs pasty, a packet of Monster Munch and bottle of Cherry Coke.

Q Transformers is such a line and appeared in late 2014 having since spanned both the live action movies and Generation One eras of Transformers with toys you can buy for less than a fiver in Japan. Inspired by the original Choro-Q line (Penny Racers to those of us in the West), they are small, super deformed transforming figures designed purely for extreme awesomeness. At least that’s how I imagine the pitch went at Takara towers.

Anyway now Q-Transformers QTF05 Ultra Magnus is in my hand how do I feel about it? 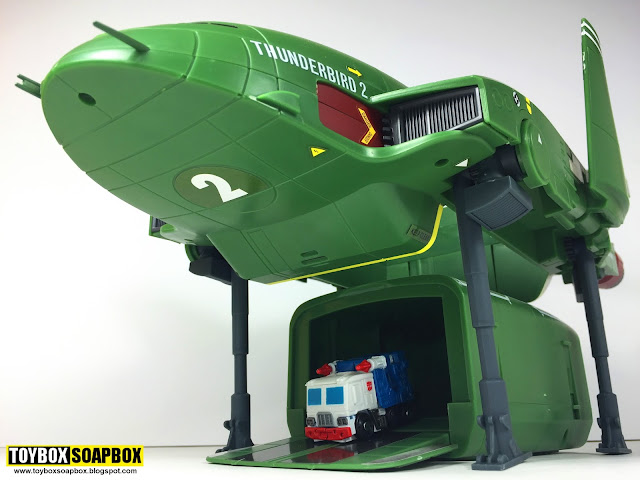 Q Transformers are chibified versions of  Transformaers characters. Takara funnelled inspiration from the Penny Racers to create the original mini-bots giving them a chunky, chibified appearance and this modern Q-Transformers lines feels like a spiritual successor to both. 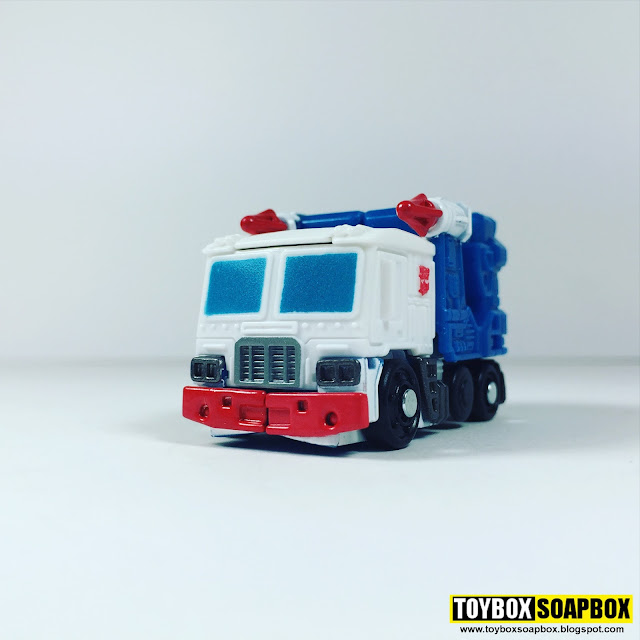 Amazingly, so much of the detail is retained that it’s hard to really pick up on anything that is missing. The signature shoulder launchers are there, there are teeny molded Autobot badges on the sides of the cab, there is molded details to show where his arms would be on the top, and the bumper is even painted Red to match the cartoon for you cartoon accuracy nuts out there. 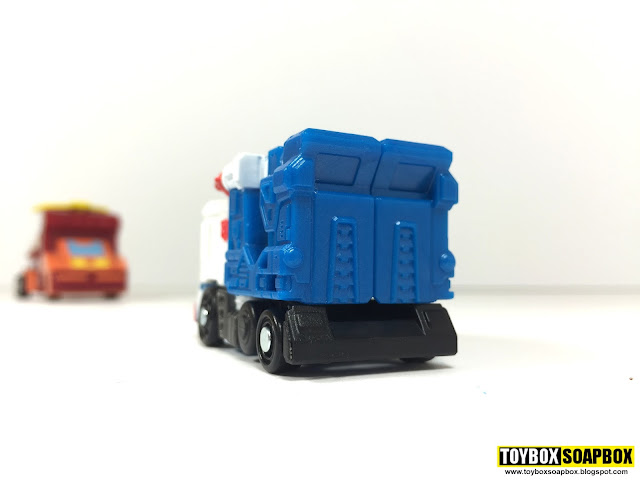 Spin him around and his shin detailing is even molded onto the back, as are some rear lights which nobody would notice if they weren’t there, but it’s symbolic of the care Takara tend to take with their figures. More paint apps have been applied, very cleanly I should add, to this ickle bitty figure than Hasbro bother to do with their deluxes. 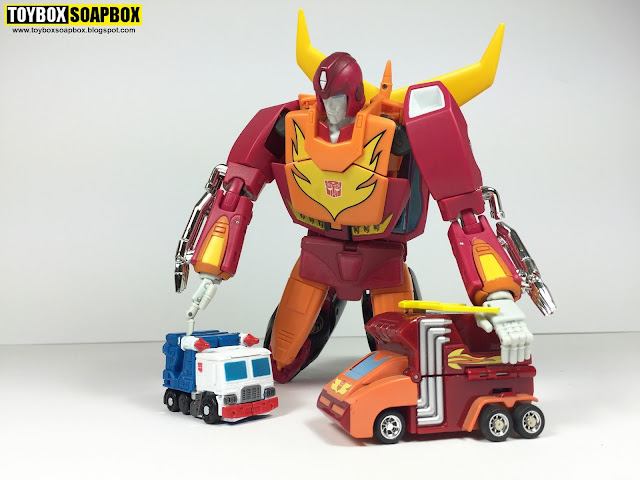 You get four rolling wheels with two sculpted plastic wheels that don’t spin to give him a look of a six wheeled micro truck. Penny Racers had a pull back motor gimmick which is absent here (a positive in my opinion) so there is not much play value – but there isn’t really intended to be.

Something about the Q Transformers is beautifully playable and they work just as small toy vehicles. There is a play pattern at work here which is brilliant, and calling back to cheap G1 minibots in approach really underpins that feeling that these are toys to be played with primarily as toy cars.

Anything to feed the addiction. 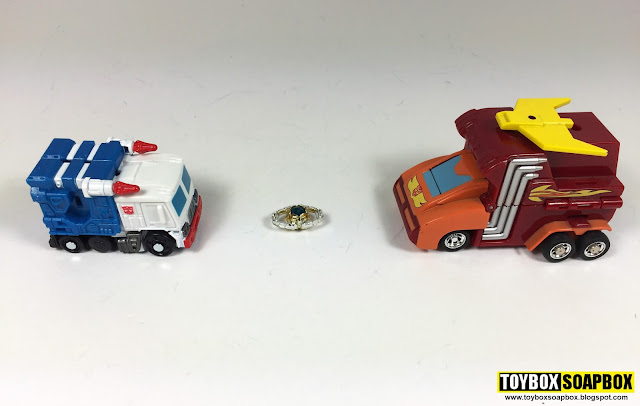 Transforming Ultra Magnus is simple and sees the appearance of an auto-morph gimmick that demands you watch where you put your fingers.

Pull the feet out of the bottom, split the trailer in half and rotate the halves to form the arms then flip up the back wheels to the figures back which causes the Magnus stunned face to pop up from his body.
Hasbro and Takara love heads that explode out of the body of their own volition (or a bit of mechanical trickery). 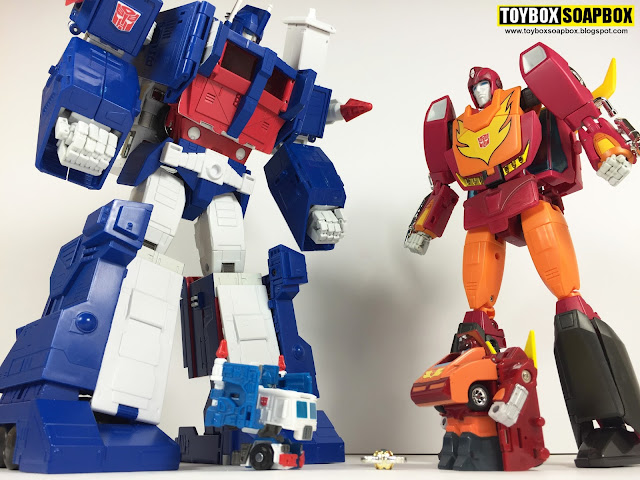 Ultra Magnus has always been the Autobots Tetris aficionado, and his blocky proportions translate perfectly to a shrunken down lump of a form. When I imagine him walking (I don’t know why either) I picture Morbidly Obese Energon Optimus Prime, but in an intentionally funny way 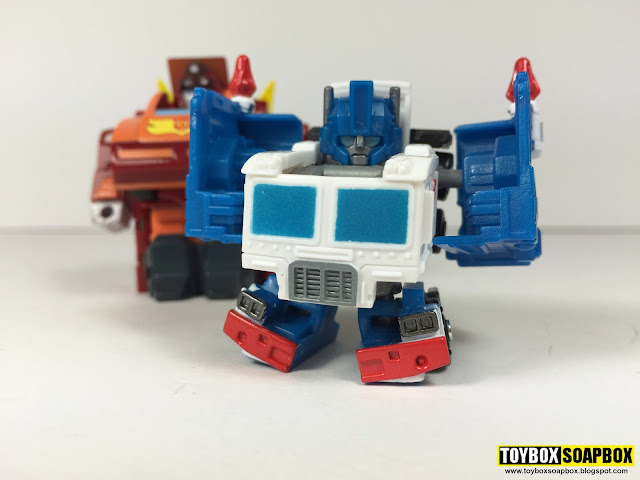 Magnus head sculpt is so well done it may just be my favourite Ultra Magnus face ever. Just look at that expression, there’s bemusement and confusion in there depending on just how much booze you may have had. A squished face, stretched eyes and elongated forehead just exude character and make me want to laugh every time I look at it.

He just looks so put out at being so small – he can’t deal with it (you knew that was coming).

The head even turns and owing to the transformation can even look downwards to add an extra level of expressiveness, should you wish to take advantage of it. 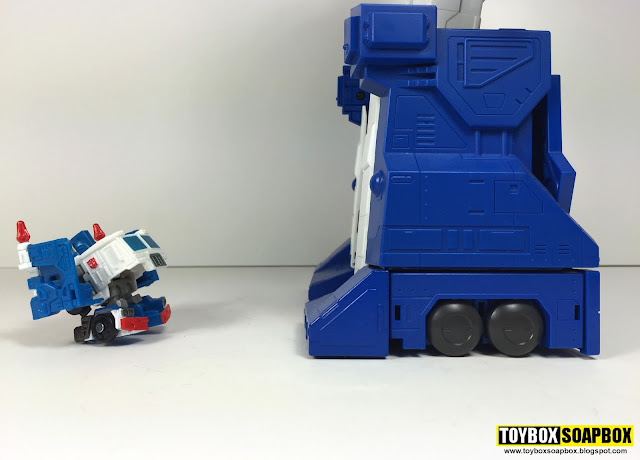 Articulation is actually pretty cool for a figure of this size with ball jointed shoulders giving him massive, funky Chicken enabling arms. The legs move forwards and backwards independently with ball jointed feet adding an extra degree of articulation.

Owing to his chibified proportions the short legs may have articulation but it doesn’t offer much in the way of posing – but that is not what this toy is about. Fun is the overriding sense you get from the Q Transformers figures rather than need articulation or gimmicks, they are just little bite size pieces of fun that I wish they made cakes of so I could eat them up. 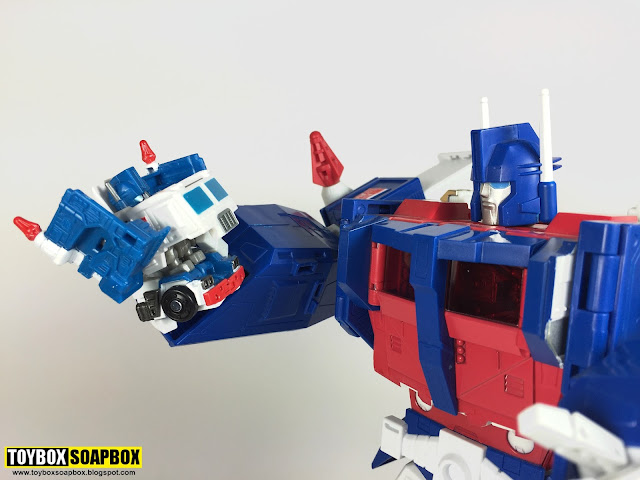 QTF05 Ultra Magnus was a figure I bought on a whim becuase it was available at such a crazy cheap price and it is nice every now and again to get out and stretch the imagination by looking beyond the never ending release schedule of Masterpiece and Generations Transformers. What surprised me is just how much Takara have put into it in terms of paint and detail and the overall feeling of care which makes me slightly begrudge what Hasbro have been putting out lately at much higher price points.
They don’t have limited articulation but it is in no way detrimental or impacts the amount of fun they radiate.

Q-Transformers are toys that define the term “plastic crack” because the low price point combined with the abundant release schedule and appealing character selection that plays strongly on nostalgia makes it very tough to avoid falling down another exhausting rabbit hole.